Zaxby's is Playing to Win the Chicken Sandwich Wars

The 30-year-old brand believes it has the product to do just that.

Zaxby’s marketing chief Joel Bulger believes the “chicken sandwich wars” have reached the natural selection phase. This past year, chicken sandwiches—breaded and grilled—were included in 6.7 percent of all U.S. restaurant orders, according to The NPD Group. That’s good for some 3.5 billion servings.

With demand and buzz at unseen highs, don’t expect brands to sit on the sidelines. Chains, and sandwiches, will continue to enter the arena. Burger King, sister brand to Popeyes and its now-legendary product, has one planned for 2021. McDonald’s just joined the fray in late February.

So Zaxby’s was far from late to the game, Bulger says, when it launched its “Signature Sandwich” nationally last week. In fact, the brand could have gone to market “six or eight months ago,” he says, with “an average chicken sandwich.” But Bulger had foresight.

He knew the category would ultimately stretch to the point where it wasn’t simply about being the latest news anymore. It would become a process of elimination.

“And we entered it with the intention of winning,” Bulger says.

Zaxby’s spent close to a year on its sandwich, which the brand claims is the biggest out there. It piloted in 89 locations across five markets starting in October, mostly in Tennessee and Kentucky, or roughly a 10th of Zaxby’s 909-unit system.

During tests, the sandwich outperformed Zaxby’s existing hand-breaded fillet by 600 percent. While Bulger couldn’t get into specifics yet, he says some stores in the first week of national launch are already outperforming sales from the end of the pilot. “So when those stores all ramped up in the test, I have stores that are beating those numbers,” he says. “Which I never thought I would see this quickly. We’re off and running.”

Zaxby’s, like the rest of the food world, watched as Popeyes’ took on Chick-fil-A via social media in 2019 and ignited a food craze. And it’s not alone in deciding to dive in.

However, where Zaxby’s differs, Bulger says, is in expectation. This isn’t a burger chain trying to compete with the “chicken guys.” Zaxby’s has been a poultry force for three decades.

“When we wanted to come out and design a sandwich, our challenge from our CEO, Zach McLeroy, was, ‘I want you to build the absolute best sandwich out there,’” Bulger says. “We always wanted to create a sandwich that featured Zax Sauce.”

The brand worked backward. It took its signature Zax Sauce and molded a chicken sandwich around it.

The product is double-hand breaded. It’s so large Zaxby’s had issues with the foil bags during trials. “Partway through the test, we realized we had to go to a bigger bag just to contain the sandwich,” Bulger says. “And that’s a good problem to have, but one of those things why you operationally test.”

Zaxby’s looked at “probably 50” different breading options. It created an additional Spicy Zax Sauce—always in the back of the R&D team’s mind—just for the sandwich. The bun had to be changed to stand up. So now, it’s a split-top potato bun that holds integrity well in the foil bag, and big enough to support the sandwich itself. Three crispy pickles finish the deal.

The Signature Sandwich is, outside of salads, the largest product launch in company history.

“We know there is a lot of [quick-service restaurant] competition, but Zaxby’s is best known for chicken,” McLeroy says. "If we say we want in on the chicken sandwich war, we want to play to win. We knew it was going to take time, but it was worth it.” 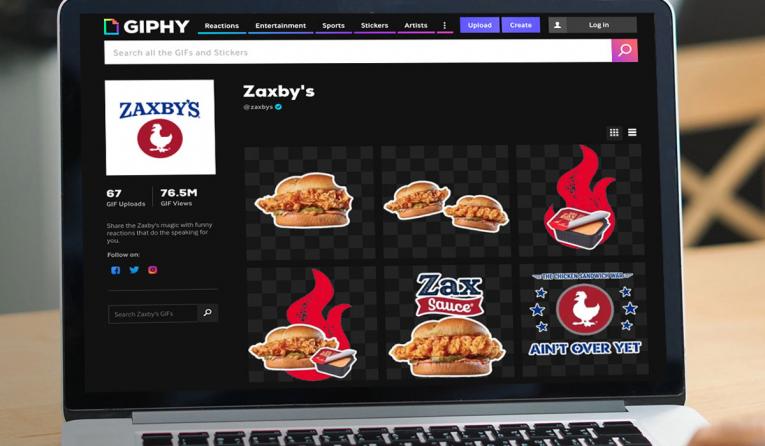 Zaxby’s has a full-blown kitchen in a warehouse near its base in Athens, Georgia. It ran the sandwich through over and over, Bulger says. It put more people and cars in line to see if it would slow down operations.

The brand ironed out those kinks and sent it to franchisees, who wanted to keep it the moment they started selling it, Bulger says.

Zaxby’s launched with a military theme, complete with “Chickenflage” uniforms for employees. The message and marketing—“The Chicken Sandwich War Ain’t Over Yet.”

This is actually a point, as offbeat as it is, that can’t be understated, Bulger says. We’re well removed from Popeyes game-changing tweet, and yet the conversation remains as vibrant as ever.

According to ecommerce data company Edison Trends, overall spending on chicken sandwiches grew 420 percent between January 2019 and December 2020. It looked at 100,000-plus food delivery app transactions from Chick-fil-A, Popeyes, McDonald’s, Wendy’s, Burger King, Jack in the Box, KFC, and Zaxby’s.

What this tells us is that lockdowns did little to dilute chicken mania. Customers ordered the sandwiches as frantically through the drive thru and via delivery as they did walking into restaurants pre-COVID. If you consider it, there’s even added benefit. Bulger says Zaxby’s past offerings, before its fillet sandwich, were chicken tenders on a sandwich. And, of course, its platters, wings, salads, and other classics. Those are all difficult to eat while driving a car.

“This sandwich is perfect for that,” he says.

But to the overall landscape, restaurants are going to keep fueling each other in a certain sense. Zaxby’s recently tweeted a picture of its Signature Sandwich sideways and said, “introducing our new chicken sandwich taco.” It was a quip on Taco Bell’s February announcement it was testing a Crispy Chicken Sandwich Taco in March, with national plans to follow. The “sandwich” is served in a puffy bread, shaped like a taco, and filled with a piece of crispy tortilla chicken and signature creamy chipotle sauce.

Zaxby’s response is a sign of what’s next from restaurant marketers, Bulger says. With every launch, there will be a chance to contrast. “At the end of the day, it is about the food and somebody’s got to win,” Bulger says. “But the good news is we’re going to constantly feed off each other. The chicken category and the chicken sandwich in particular, is the hottest thing out there right now in the restaurant space. Even as we continue to spar with the other chicken sandwiches, tomorrow somebody else will launch another one and then it starts all over again.”

McLeroy says chicken is hitting its stride for several reasons. Taste, value, portability, familiarity among them. “But also, I think it’s the ultimate comfort food,” he says, “which seems like something we all need these days.”

Just as Popeyes reported, Bulger sees the sandwich driving new users into the brand. At this point, though, it’s something extending beyond guests curious about Zaxby’s. Bulger says there’s a dedicated base of chicken sandwich wars aficionados who want to weigh in on every launch.

For core guests, he says, it’s something new that offers another reason to come back.

Zaxby’s won’t be shy, as its Taco Bell comeback suggests, going after the biggest players. Bulger considers this positioning a strength. “I do think folks love the underdog, and they love smaller brands challenging these behemoth brands out there that have big budgets and lots of stores to promote things with.”

“We’re us,” he adds. “We’ve always just been us. We’ve been honest and straightforward and genuine and high quality. And we’ve never walked away from any of those things.”

Expect a national marketing push soon. This will include outdoor and extension boards and some playful commentary. Zaxby’s created an app-focused deal where customers get a free sandwich for signing up.

It also engaged influencers on a local level to taste the sandwich and let their networks know what they think.

The military theme will continue as well, and crews will embrace the look and mantra. Zaxby’s even created special gray manager uniforms at employees’ request.

“If you take the McDonald’s or the Wendy’s sandwich or the Popeyes sandwich or even Chick-fil-A, and you put it side by side with our sandwich, I don’t think there will be any question in anybody’s mind who’s got the best one out there,” Bulger says.