End of the Chicken Sandwich Wars? Not So Fast, Zaxby’s Says

The fast casual is ready to reignite the conversation.

The story of last summer ignited August 19 when Popeyes decided to troll Chick-fil-A on Twitter. And thus the chicken sandwich wars were born. As we know today, this was far from a one-shot event. Even more than a year later, with COVID-19 storming on, the effect lingers.

So even lapping its original quarter result, the momentum continues for Popeyes. Not even a pandemic can stall it. Popeyes hit a low point in March with flat comps. But, by April, they popped into the positive 30s. They were in the low 40s in May. In fact, parent company Restaurant Brands International, which also owns Burger King and Tim Hortons, said in August average-unit volumes rose to $1.7 million—a substantial and rapid hike from 2019 levels of $1.54 million.

Now, another contender is entering the ring. Zaxby’s Tuesday unveiled its “Zaxby’s Signature Sandwich,” served with a choice of Zax Sauce or a new Spicy Zax Sauce.

Zaxby’s fired a social media shot to get things started with a “Y’all ready?” tweet (a reference to the now-famous "Y'all good?" Popeyes tweet to Chick-fil-A. The underlying message—the chicken sandwich wars aren’t over just yet.

Zaxby’s conducted extensive consume research on chicken sandwiches ahead of launch, it said. What it uncovered is that size matters (more on this shortly). Also, the 900-unit fast casual developed a multi-faceted ad campaign to get its message across.

As noted, Zaxby’s started with the “tweet that reignited the chicken sandwich wars.” Additionally, an advertising campaign launched a day earlier in broadcast and digital media channels, with supplementing efforts rolling in coming weeks.

Zaxby’s also introduced “Chickenflage” uniforms for employees. More efforts are planned, but not ready to be shared yet.

Zaxby’s said the secret weapon, however, is its new Spicy Zax sauce. Ingredients include jalapeno and red cayenne. The heat level is in line with the brand’s Tongue Torch sauce.

Currently, the sandwich is available in Nashville, Knoxville, and Tri-Cities, Tennessee, as well as Louisville and Lexington, Kentucky. A national rollout is coming soon, the company said.

CMO Joel Bulger chatted with QSR about the introduction, what to expect, and why it’s going to stir up the chicken sandwich game all over again.

Let’s start with the question everybody will be asking: What’s different about the Zaxby’s chicken sandwich from the other options out there?

First, Zaxby’s new Signature Sandwich is huge. Beyond that, the ingredients are top-notch:

A double hand-breaded fillet made from 100 percent white breast meat. A new buttery, toasted split-top potato bun Not one, not two, but three thick-cut crispy pickles And our secret weapon—Zax Sauce—and (for the first time ever) new Spicy Zax Sauce.

Talk about the ideation process. How long did it take to create the sandwich to where it was just right? How many versions did you go through?

It took about a year and over a hundred iterations. The size, appearance, texture, heat level, overall taste, and satisfaction with each ingredient needed to exceed all expectations in focus group testing before we could consider the job complete. A few of the key things we focused on include:

Developing a double hand-breading system and process that creates the ideal crunchy, craveable texture and can be consistently replicated.

Perfecting the flavor and heat level of a spicy sauce worthy of carrying the Zax name.

Upgrading the bun to have the texture, appearance and taste guests prefer.

Creating the ideal pickle experience—we started with two, but learned it had to be three. 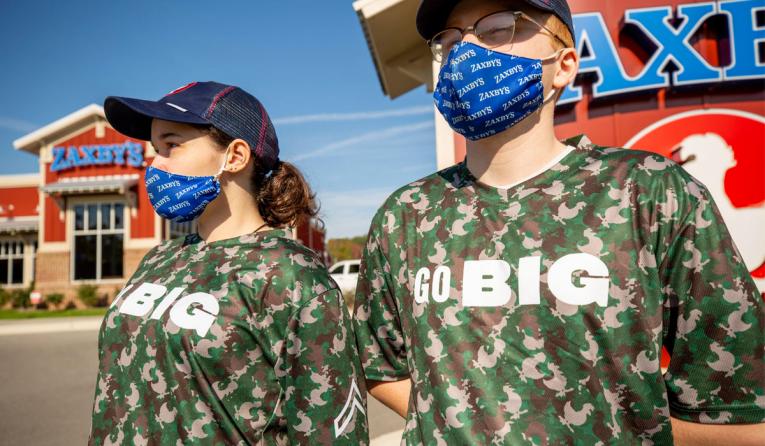 The branding goes down to the store level with "Chickenflage" uniforms.

What were some key insights to emerge from your consumer research on chicken sandwiches?

The flavor and size are two major attributes of the Zaxby’s Signature Sandwich that made it standout amongst the rest. The biggest contributor to the flavor is Zax Sauce and new Spicy Zax sauce which customers felt—and I’m paraphrasing here—is unmatched. The size of the fillet is noticeably larger, not only than our former TLC Sandwich, but also than other chicken sandwiches within our competitive set.

How would you describe how “big” the sandwich is? How does it compare to the other players?

According to our qualitative research study, three in four consumers perceive the sandwich to be bigger than most chicken sandwiches at other quick-service restaurants.

While it’s “classified” is there anything you’d like to share about the national timing? Has the sandwich been in tests?

Zaxby’s Signature Sandwich has made it through several rounds of concept testing and taste testing as well as an ops test. We are now in the market test phase, and the future is top secret.

Shifting to marketing, elaborate on the multi-faced ad campaign in store. What can people expect?

Without giving too much away, you can expect to see traditional ads as well as digital and we’ve got some unexpected activations that will happen along the way. Remember, this is just the beginning. We haven’t launched nationwide. All I can say for now is there’s more to come.

It sounds like Zaxby’s is going for the long approach in addition to a buzzy first release. How do you plan to keep customers engaged along the way?

We’ve got some exciting things planned, but there is also quite a lot we are leaving to chance. Our plan is to listen, react, be nimble, but remain focused. We know that once you taste our sandwich you’ll be hooked, so we’re focused on doing whatever it takes to drive trial.

Talk about the in-store activations, namely the Chickenflage uniforms.

The Chickenflage uniform signals to both employees and guests that the chicken sandwich war ain’t over yet. Our hope is that wearing the shirts will make our employees feel engaged and proud to be a part of the fight to serve the best chicken sandwich around.