A chicken sandwich for the ages.

Popeyes’ chicken sandwich has already secured its place in fast-food lore. About the only time it lost steam since debuting in August was the second half of March, when hardly any customers frequented restaurants, for any occasion. Even then, Popeyes’ comparable sales ran flat versus prior-year levels. So the chicken sandwich covered whatever stark gap most restaurants faced.

However, by the time the quarter ended (the three-month period finished on March 31), Popeyes’ Q1 comps were still up 26.2 percent compared to 2019. The half-month lull did little to dent nearly 90 days of outsized performance.

And the dip turned out to be a minor blemish. From the end of March to the third full week of May, Popeyes’ same-stores sales surged into the low-40s, the company said. Pandemic or not, this appears to be the new normal for Restaurant Brands International’s chicken chain. At least until it starts lapping results in Q3 2020. Even then, while comparable sales might level out, we’ll still look at two-year stacks that illustrate a completely different chain performance wise. And it all started with a chicken sandwich that challenged category front-runner Chick-fil-A on social media.

WHERE THE LEGEND OF POPEYES’ CHICKEN SANDWICH BEGAN

Here’s a glimpse at what life has looked like since the chicken sandwich hit the market for Popeyes.

Customer analytics firm Buxton ran some exclusive data for QSR on overall visit trends throughout the pandemic, and spotlighted Popeyes to show how one chain defied every setback thrown its way. Something to consider: It helps Popeyes enjoys a heavy drive-thru footprint and doesn’t offer breakfast service—a daypart that has struggled mightily amid COVID-19 conditions. Digital orders also represent 15 percent of Popeyes’ sales, executives said recently, and 20 percent of delivery orders are flowing through its mobile app. But you still need a product people want to leave the house for, or dial up delivery and choose over the multitude of options featured on aggregator platforms.

In both cases, the top of the curve suggests we might be mired in a “new normal.” For Popeyes, it’s been a rather consistent high mark. As you might expect with all quick-serves, there was a serious dip in March that lasted through April before recovery began in May, buoyed by stimulus checks and “quarantine fatigue.” It’s stayed up as lockdowns eased and markets open up. But this capping of visitors versus 2019 metrics is something unknown. A lot of quick-serves are lifting sales through larger orders and more off-premises business than before. It’s not, on average, coming from a similar number of visits. We have no clue when that will end.

As this chart shows, despite leveling off in recent weeks a bit, Popeyes consistently bucked the trends of other quick-service concepts, with many states exceeding performance before the COVID-19 shutdown. The data shows that while the sector as a whole might have suffered, some brands, like Popeyes, managed to reduce the impact of mandated restrictions.

Nationally, the quick-service industry has regained a portion of the traffic lost during the peak of coronavirus restrictions, Buxton said. On April 13, traffic dropped 51.5 percent from pre-COVID-19 levels. On June 1, it was just 26 percent.

However, inching back to normal isn’t an imminent notion for everybody. To the earlier graph, traffic gains plateaued in recent weeks industrywide.

Why is this happening? There are likely a few factors, and some of them tied to competitive realities. Since the onset of the pandemic, quick-service chains generally fared far better than full-service peers. On April 13, for example, sit-down traffic sank nearly 80 percent nationally from pre-virus levels. On June 1, it was 50 percent. Both are significantly deeper than counter-service measures.

Yet still, full-service brands are ticking upward. This brings up a question—does the timing of a change in quick-service traffic volumes coincide with when full-service restaurant traffic began to rise again?

Simply put, yes. Buxton’s data shows as states began to ease restrictions and sit-down concepts expanded operations, quick-service traffic gains started to steady, not rise. There are likely other factors, though, such as widespread unemployment limiting the level of consumer discretionary spending, and an undefined portion of the population still fearful of going out.

Regardless, there is a correlation at work.

This graph below, on daily visit data, shows how the timeline of coronavirus played out. The highlighted bar is when “quarantine fatigue” seemed to kick in. 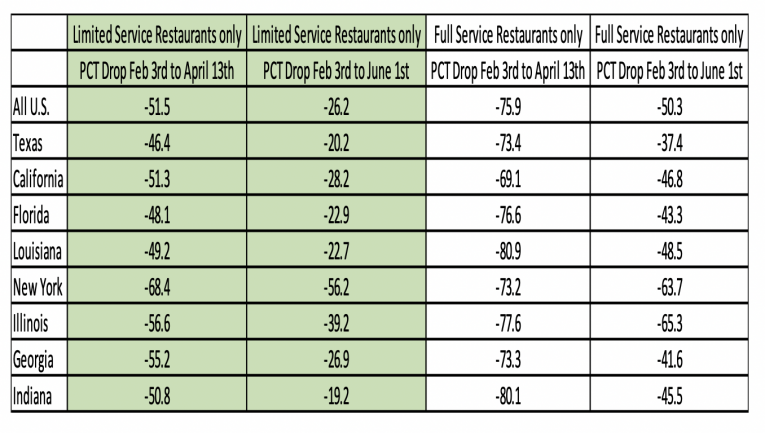 Here’s another look at that plateau Buxton mentioned, which has gone on for roughly a month.

Overall, the Popeyes story tells us something critical. There is room to rise above the plateau in this pandemic world, with the right systems in place. Product innovation, although a back-burner priority for many during these survival months, has the potential to awaken dormant customers.

And as good as the sandwich might be, it didn’t disrupt fast-food pop culture due to its quality. Popeyes’ social strategy struck a vein in the gold mine. It might not be easy to reach customers today in this setting, but the payoff is there for the taking.

Popeyes is also starting to spread the frenzy globally. The chain’s Canadian wing—RBI is actually headquartered in Toronto—announced earlier in the week it was preparing to pilot the sandwich in Alberta this month. It’s headed to Edmonton, Red Deer, and Grande Prairie before rolling to Windsor and London.

The schedule itself is dependent on COVID-19 conditions and reopenings. Popeyes plans to launch the sandwich across the entire Canadian market in the fall.

It’s been a multi-month process. The Financial Post said Popeyes’ Canada team worked with RBI’s Miami office “for months” to create a replica of the sandwich The New Yorker called “the best goddamn chicken sandwich in the world.” Popeyes took this route because it would be more cost effective than importing from the chain’s U.S. suppliers, and avoid tariffs and the “volatility of foreign exchange,” Popeyes GM in Canada, Rob Manuel, told the publication.

Back in January, the team thought it was close to reproducing the sandwich. Manuel said Popeyes’ executives tested every ingredient, taking sips of water in between bites.

Originally, Popeyes expected to test in Canada in April, but was knocked off schedule by the pandemic.

This pilot isn’t like other product launches, however. Due to the American phenomenon, Popeyes is using the Edmonton trial not as a gauge to see if it should go national—but to get a better sense of just how popular it’s really going to be. Amy Alarcon, the chef who heads Popeyes’ U.S. team, told the Financial Post, “We have to be ready for the onslaught.”

According to the story, Popeyes started reaching out to different Canadian suppliers last December. It talked to makers over pickles, mayo, buttermilk, chicken, and buns. One by one. The Canadian sandwich will import chicken from U.S. suppliers. The pickles are fresh, barrel-cured, and cut into quarter-inch slices.

The chicken is a “full muscle product,” not a press-and-form chicken patty. The company, the Financial Post said, is still look to arrange Canadian supply deals before launching nationally. If not, it could face hefty import tariffs.

One noticeable difference between the sandwiches: Popeyes in the U.S. offers an original with pickles and mayo, as well as a spicy version. The Canadian test will also feature a deluxe edition with lettuce and tomato after consumer research showed lettuce and tomato to be a must.

Why is all this effort worth it? While Popeyes’ U.S. same-store sales jumped 29.2 percent in Q1, it’s “rest of world” comps rose just 2.4 percent. On a total systemwide sales basis, the numbers were 35.9 and 9.2 percent, respectively.

Of Popeyes 3,336 global restaurants, 2,494 are located stateside. The “rest of world” count, however, is up to 842 from 763 in the same period last year. And RBI, on a handful of occasions, has spoken to Popeyes’ overseas whitespace, a possibility humming in the background ever since it acquired the chain for $1.8 billion in March 2017. Former CEO and current chairman Daniel Schwartz once noted the company would “establish partnership to meaningfully accelerate net restaurant growth for Popeyes, including through new international master franchise agreements.”

In 2018, RBI signed its first international master franchise deal for Popeyes in Brazil and the Philippines. Schwartz said these kind of deals had the potential to set the chain “up to be one of the fastest growing, global [quick-service restaurant] brands in the world.”

And this was all before the chicken sandwich. Now, it might just be the key to actually turning that aim into reality.