Just How Big of a Deal was Popeyes' Chicken Sandwich?

Popeyes sold out of its chicken sandwich just two weeks after launch.

To say Popeyes struck a chord with its chicken sandwich might be the understatement of 2019. It was an ultra-smart melding of marketing and timing. For the year through July, 2.3 billion breaded-chicken sandwiches were ordered in fast-food restaurants, according to The NPD Group. That’s a 3.3 percent jump from the prior-year period. Hamburger servings, meanwhile, slipped a bit to 6.4 billion.

Really, it’s pretty remarkable to think hamburgers are selling at just close to three times (it’s about 2.8) the amount of breaded chicken sandwiches in quick service. And this was before Popeyes’ biggest product launch in 30 years hit stores August 12 and ignited a social media war.

You can credit Chick-fil-A for the foundation of this consumer phenomenon. The brand has nearly doubled its U.S. store count in the last 12 years, hitting 2,400 units and $10 billion in total systemwide sales by year-end 2018.

Popeyes passively latched onto Chick-fil-A’s boom by simply launching a chicken sandwich, which was two years in the making, per The Wall Street Journal. Chefs in Popeyes’ Miami test kitchen developed a new buttermilk batter for the product and tracked down a special flour to create its crunchy texture. The chain then used the same buttery topping found on biscuits to coat the bun. Barrel-cured pickles were cut thicker than competitor’s sandwiches to stand out. Chick-fil-A, by the way, hasn’t modified its signature offering since it first opened in Atlanta in 1967.

But the real secret ingredient for Popeyes came once the product landed. Chick-fil-A’s own success and fervent fanbase was the springboard. A Twitter battle erupted between the two. Wendy’s chimed in. Soon “CBS This Morning” co-host Gayle King tried it out. Someone tried to sell one for $7,000 on eBay. There were crazy stories of armed people rushing restaurants, demanding the sandwich.

By August 27, Popeyes was sold out, just two weeks after launch. The brand served as many chicken sandwiches in that span as it expected to dole out through the end of September.

Apex Marketing Group estimated that Popeyes reaped $65 million in equivalent media value—nearly triple the $23 million media value the sandwich generated in its first few days of sale, according to the company.

Timing. Marketing genius. Popeyes struck when the chicken sandwich iron was hot. But it also used the most visible player in the game to generate its own noise. An us versus them debate that everyone on social media had to comment on. It wasn’t enough to just eat the sandwich. It was a status symbol. Popeyes catered to the tribe mentality of the Internet in a way few brands before it has.

So, the next question is, how did the attention really manifest? YouGov took a dive into the fast-food cultural experience to explore a few data points. Firstly, despite the shortage, Popeyes achieved one of the most significant improvements in YouGov’s Ad Awareness metric (whether someone has seen or heard an advertisement by a company in the past two weeks) among consumers throughout September. The buzz didn’t disappear.

The chain’s 30-second “BYOB” advertising launch (above), which was an offbeat follow-up to the sandwich selling out, gave Popeyes a further boost in awareness. The chain lightly encouraged guests to bring their own bun to make a sandwich with Popeyes’ well-stocked chicken tenders. At the start of August, 19 percent of Americans said they saw an ad for Popeyes. By September, the number jumped to 28 percent. 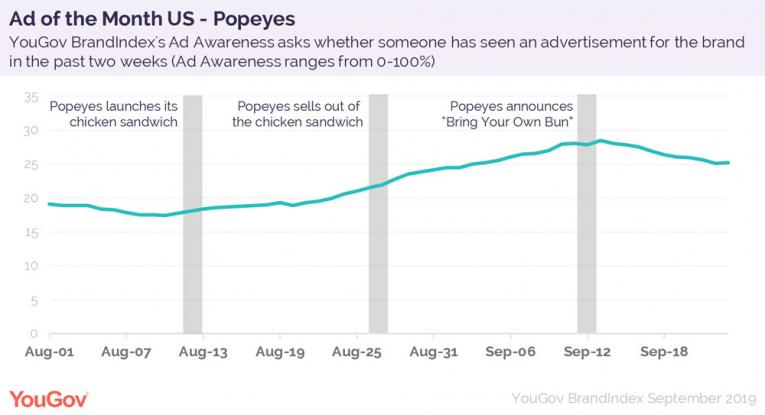 Let’s look deeper at August. As indicated, Popeyes Ad Awareness score hits a high on August 28, right after it sold out. The BYOB deal was important because it provided Popeyes an outlet for a second marketing act to bounce off this awareness before it can sort out its supply chain and bring the chicken sandwich back (which it’s provided no timeline for). You can also see earlier in the month where Popeyes was well below Chick-fil-A and then spiked up. They ran neck and neck for a bit before Popeyes took off on the sold-out news, for better or worse. But the fact Popeyes closed the awareness gap so dramatically and stood toe-to-toe with Chick-fil-A isn’t a fact that should be undersold. 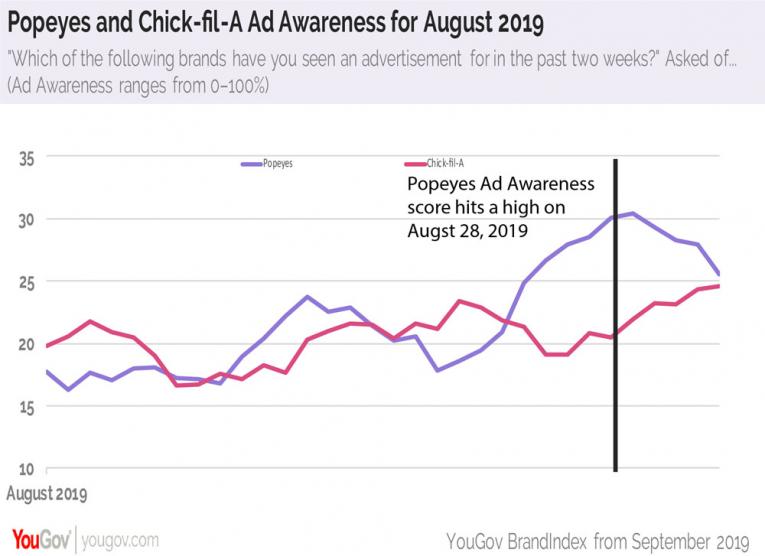 YouGov’s Word of Mouth tracker measures from the following question, “Which of the following brands have you talked about with friends or family members, online, in person, or through social media, in the past two weeks. It ranges from 0–100 percent.

The below graph shows a very broad sample, going all the way back to September 2013. It’s looking at the 15th all the way through. Not surprisingly, Popeyes’ score hit a record high (since YouGov started tracking) at 10.1 this year. So, you can make the claim that this event got more people talking about Popeyes than any other in its recent history. Maybe ever. 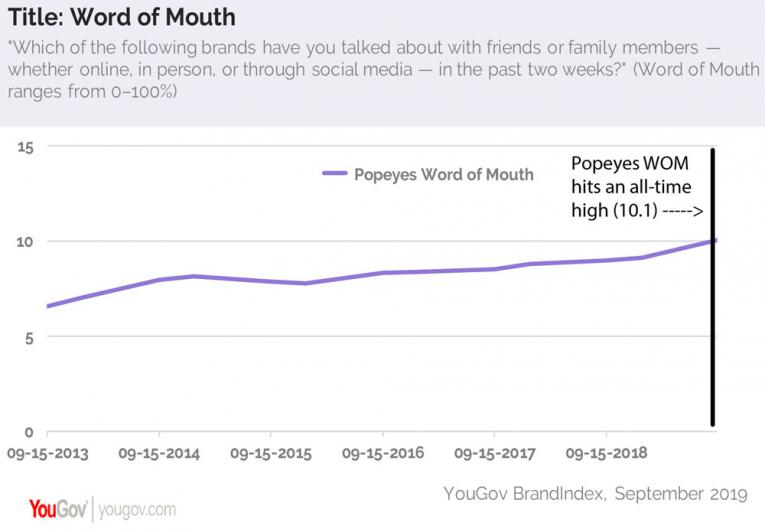 Throwing Chick-fil-A into the mix, just for August, you see, once more, how wide the gap between the brands was to start the month. Here comes the chicken sandwich, there the discussion changes. By the time the month concludes, Popeyes and Chick-fil-A are sharing the spotlight. It’s also worth circling the fact that Popeyes’ stunt also popped Chick-fil-A’s awareness to higher levels, especially toward the end of the month. If anybody thought Popeyes’ sandwich took away business from Chick-fil-A, it doesn’t appear to be the case. At least not from an attention standpoint. After all, people had to try both to know, didn’t they? 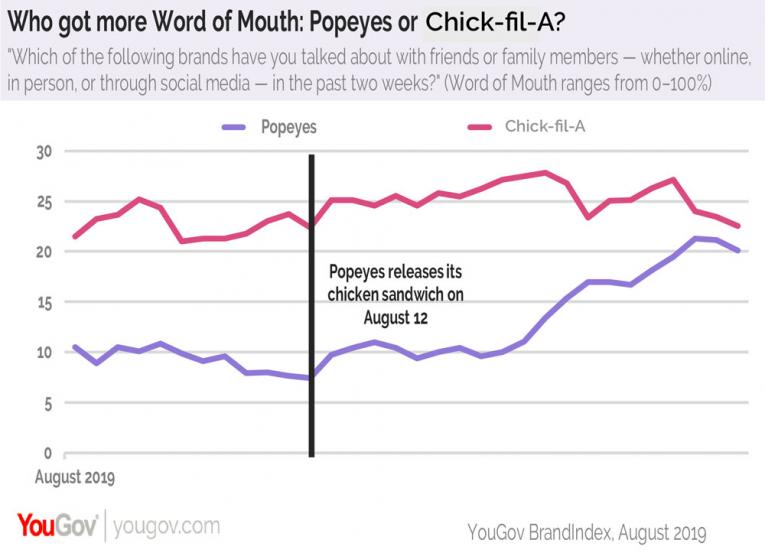 August was a month to remember for both brands.

YouGov also ran a buzz chart against “if you’ve heard anything about the brand in the past two weeks, through news advertising, or word of mouth, was it positive or negative?” Scores range from negative 100 to positive 100. Here you see similar results. A large split that tightens and then crosses, with Popeyes actually taking the lead toward the end. 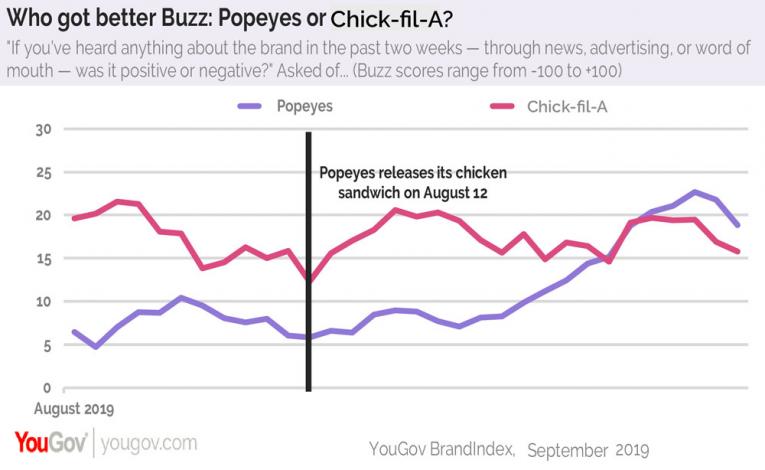 Can Popeyes create more buzz from its previous buzz?

As always, and it resembles IHOP’s IHOb campaign in some ways, creating a firestorm of social buzz is great for a brand. But it’s only phase one. How will Popeyes drive trial from this attention moving forward? Is it as simple as bringing the sandwich back? It might just be. However, it wouldn’t be surprising to see Popeyes emrbace this reinvigorated personality in future communications, and build product launches and campaigns against it. Keep that ad awareness high. Restaurant Brands International’ lead investor, 3G Capital, told The Wall Street Journal that edgy social-media posts are often a better use of money than TV spots. Just look at Burger King.

The company added that internal research showed that many Americans hadn’t tried Popeyes before its chicken sandwich launch. Popeyes’ Americas president Felipe Athayde said, “Marketing can’t be any better than this.” And he wasn’t wrong. It brought customers into the brand who weren’t talking about it before.

How can Popeyes keep the chatter going?

Take a glance at the buyer data:

Some interesting notes: The item brought in visitors with unique characteristics versus its typical buyers. It attracted younger, more affluent customers from larger households compared to the average Popeyes customers.

Ninety-two percent of product buyers said they were either “extremely” or “somewhat” likely to return to Popeyes to purchase the sandwich again in the future, indicating the item could be critical to inspiring sustained customer loyalty. 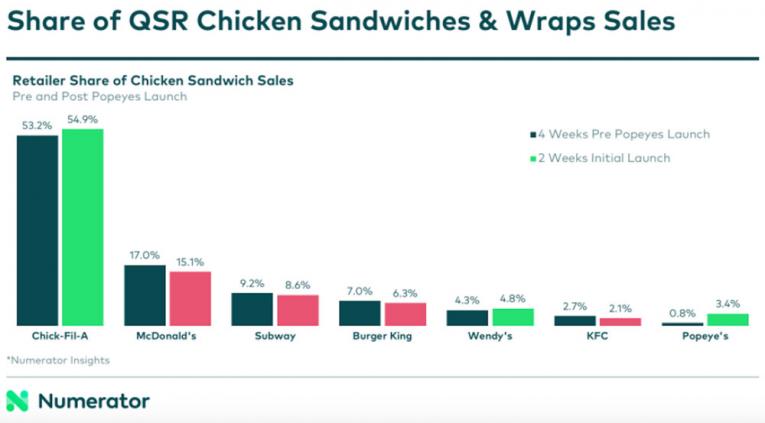 Popeyes hasn't set a timeframe for getting the sandwich back in stores.

The data suggests that about 30 percent of Popeyes’ new chicken sandwich fans were purchasing crispy chicken sandwiches at other quick-serves in the weeks prior to their trying it. Share of wallet data post-launch indicated a shift in chicken sandwich spend across several of the industry’s leading players. Popeyes and Chick-fil-A, naturally, experienced a boost. McDonald’s and some smaller chicken competitors saw a decrease.

The item not only brought new visitors to the chain, but it also successfully pulled guests away from competitors. More than half (51 percent) of non-buyers during the shortage period said they went to Popeyes with the intent to buy the sandwich (this is when it was sold out).

There’s little double competitors will dive into this void with chicken sandwich product launches of their own, making Popeyes need to get the product back in stores all that more pressing.