After selling a ‘significant’ stake to Goldman Sachs, the 30-year-old chicken chain sets sights on expansion.

Zaxby’s CEO Zach McLeroy has had one business partner for the past 30 years—his lifelong best friend, Tony Townley. Back then, a gallon of gas cost less than $1.50. Tim Berners-Lee just published a formal proposal for the World Wide Web.

Yet McLeroy and Townley weren’t doing anything Wikipedia worthy. They were playing basketball, talking smack, and lamenting the lack of quality chicken in Statesboro, Georgia. They also happened to be discussing the idea of Zaxby’s.

Now, 900-plus restaurants later, Townley is set to exit the business to focus on family. It’s a pivotal turn for Zaxby’s that took shape before COVID-19’s March landing. But it was really set in motion two months later. Roughly half a year ago, McLeroy and Townley decided to seek a private-equity partner. One that would allow McLeroy to remain with Zaxby’s and guard its growth and culture, and for Townley to step aside.

Zaxby’s garnered “a tremendous amount of interest” from firms, McLeroy said. Given the sizzling nature of the chicken segment, it’s rare to see a 900-unit brand with 30 years of equity hit the market. But it’s truly a unicorn sighting to find a privately held, founder-led company without a trail of investor baggage.

This past Friday, Zaxby’s announced it agreed to sell a “significant” stake to sector giant Goldman Sachs for an undisclosed amount. The firm’s Merchant Banking Division will fund the deal, targeted to close by year’s end.

McLeroy says reality hasn’t settled in. He expects it might once the deal finishes. “We’re so much in the trenches every day working on this, working toward the transaction,” he says in an interview with QSR. “And on one hand, I feel this little sentiment about it being a bit bitter sweet. I’ve been doing this with my partner for 30 years and now my partner is about to change.”

“But then, when I look at the opportunity that lies ahead with this new partner, I’m really excited about that,” McLeroy adds.

What Goldman Sachs promises to unlock, with its vast resources in tow, is clear. If you look at the map below, Zaxby’s potential is captivating. 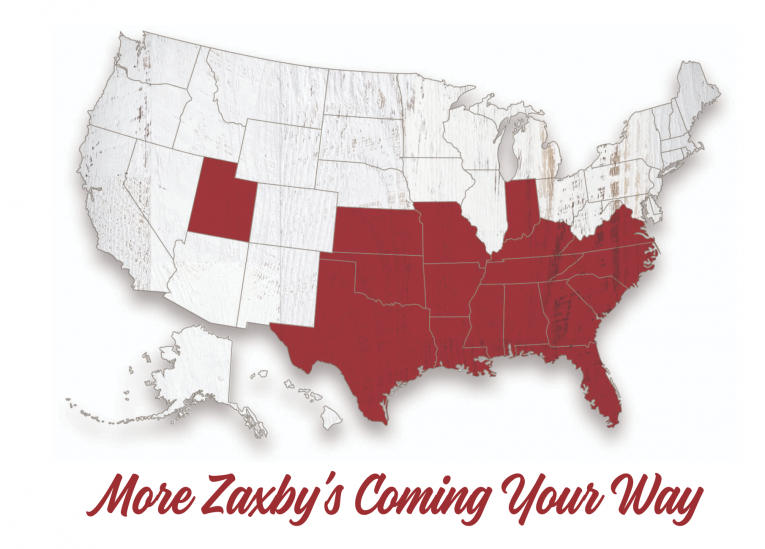 Plenty of room to grow.

McLeroy says Goldman Sachs will help Zaxby’s achieve what it always aimed at from a distance—to go national. It was attracted to Zaxby’s core differentiators and this runway, as well as ownership history and licensee base. Of the chain’s 904 units at 2019 close, 755 were franchise-run. The brand has grown that side of its business by 77 locations in the past three years.

Notably, Zaxby’s average licensee only runs three locations. And the company allows them to grow as large as they want (as long as they’re compliant and successful). Operators can build legacy wealth and hand stores down through the family. Minimum gross revenues across Zaxby’s base measure $497,882. Maximum is $4.32 million. The number of units above the average figure is 339, or 46 percent, with median gross revenues of $2.1 million.

In total, Zaxby’s expanded by net 86 restaurants since 2016. Georgia, naturally, is the largest market today with 190 stores. North Carolina is next at 97.

McLeroy says Zaxby’s boasts a current pipeline of more than 300 committed units from existing licensees. So not only is Zaxby’s current portfolio sizable—it’s scaling from within.

Zaxby’s model over the years was to spread in concentric circles. Seed a pioneer market, often with corporate stores, scale through franchise growth, and then head to the next state or county. This was mostly the case throughout Zaxby’s existence, minus a group out in Utah.

McLeroy expects to continue along that path, just to pick up momentum. He says there’s “huge opportunity” in Texas. And even north into Virginia. “Grow more in Illinois,” McLeroy adds. “We’re on the border of going back into Ohio. We were in Ohio once before. … We were even thinking about possibly growing in the Washington, D.C. area.” 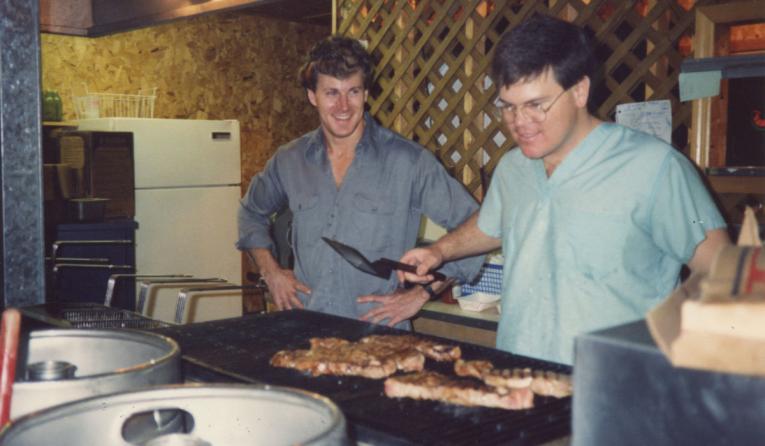 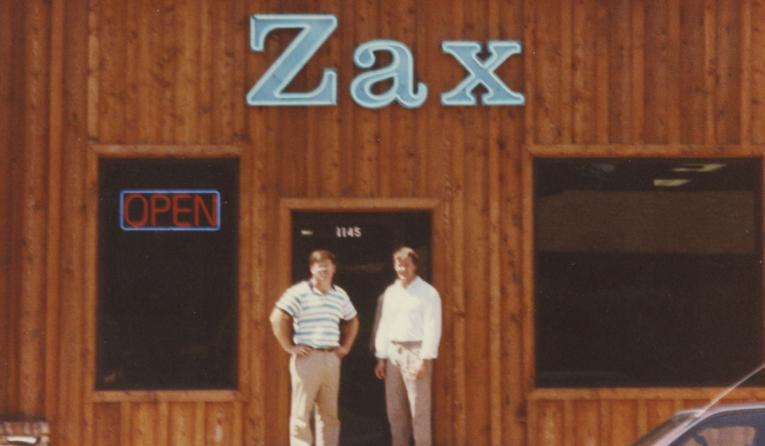 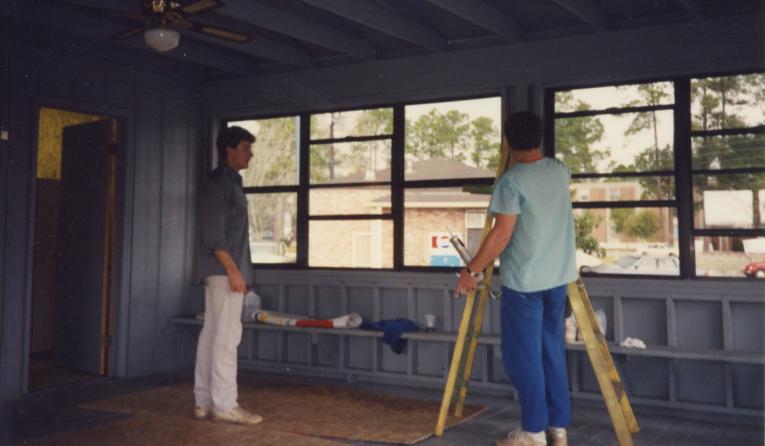 Zach McLeroy and Tony Townley have spent the past 30 years guiding Zaxby's into the 907-unit brand it is today.

The COVID-19 backdrop won’t slow Zaxby’s. Its heavy drive-thru footprint and ability to serve off-premises occasions has led to what McLeroy believes will be “one of the biggest years we’ve ever had.” Transactions are up about 25 percent, year-over-year.

“There’s a lot of vacant real estate. There’s been a lot of closed restaurants that unfortunately did not have drive thrus and could not sustain that type of loss,” he says. “And then you look at retail, the amount of retail that’s closed. There’s a lot of vacancy in strip centers that I think we’ll be looking at. And we feel like it’s an opportune time to grow because COVID really, in one respect, has been really good to our brand.”

Additionally, a new alliance for loyalty was born out of pandemic habits. It’s a dynamic unfurling across foodservice. Instead of discovery leading the dining-out decision-making process, customers are leaning on familiarity and trust, and rotating brands that can offer a frictionless, safe experience. “There’s a greater opportunity to impress those guests who may have never experienced a Zaxby’s and then build more loyalty with the guests you have,” McLeroy says. “And you do that by being more efficient, being more accurate, making sure the product is the best it can possibly be for the guest we have.”

Online ordering increased three-fold for Zaxby’s during COVID. Delivery is fueling possibility, too. All of it makes the idea of dropping into a fresh market a less daunting one. Simply, the competitive set and challenge changed. The fact Zaxby’s offers delivery and drive thru alone, while many others don’t, McLeroy says, will generate awareness.

Goldman Sachs was more than content to allow McLeroy to lead Zaxby’s next phase. It is mandating him, however, to put together a board where they’ll hold seats. “So I guess for the first time it’s almost like I have a boss that I have to answer to,” he says.

“One major thing that I focused on as we met with these groups—I told them our brand is based on relationships. It’s not just about the food that we serve. We’re about so much more than that,” he says. “We’re about opportunity. We’re about people.”

McLeroy told Goldman Sachs this angle had to remain. Zaxby’s doesn’t want to spark growth and leave its past behind. Namely, this means growing with mom-and-pop-type franchisees as well as “sophisticated operators from other brands,” he says.

“A real focus on culture and treating people right, and giving back to the communities we serve,” he says.

Zaxby’s carried buzz into the deal. Building off the noisiest fast-food story of 2019, when Popeyes challenged Chick-fil-A on Twitter and spawned a chicken sandwich gold rush, Zaxby’s itself dove into the battle in late October with a “Signature Sandwich” that comes with Zax Sauce or Spicy Zax Sauce and touts size as a differentiator.

It also introduced new uniforms and continues to work on a more efficient kitchen and design so it can prepare for take-off. Labor and recruiting, McLeroy says, is “a challenge in every single market.”

Zaxby’s will try to counter the hurdle with more efficient stores, an appealing vibe (new uniforms), and visible career ladders, including an operating program where employees can take over a store if they prove themselves.

In the early days of COVID, Zaxby’s offered franchisees royalty relief and continues to do so over seven-week periods. It allowed operators to stop paying national ad fund, too. Ultimately, Zaxby’s gave back about $7 million that it would have typically earned in royalties and fees.

All of its stores as a result, however, are still open and have business, McLeroy says. “Still have their employees intact,” he says. “And it’s proven to be a great year for the entire brand. Everybody is doing very, very well.”

Taco Bell’s Gravity-Defying Restaurant is the Future of Fast Food
In Search of the Perfect Drive-Thru Restaurant
What’s Next for the Fast-Food Drive-Thru Menuboard?

5 Questions with McDonald's Trailblazers Skye Anderson and Myra Doria
What is the Inflationary Tipping Point for Fast Food?
Amid Inflation, Restaurants Work to Guard Value Proposition

Why Inflation is Making Customer Experience More Important than Ever
The State of Restaurants: Demand, Price, and a Race for Loyalty
Inflation Sends Restaurant Customers on a Hunt for Value