Domino’s is Already Building for a ‘New Normal’

Will customers snap back to old habits? Not likely, CEO Ritch Allison says.

Domino's has fewer than 20 stores closed domestically due to COVID-19.

Domino’s CEO Ritch Allison Thursday said something that’s run like an electric current through the industry in recent days. It might not be the most visible COVID-19 narrative, but it's sat in the wings. Are the drastic changes taking place more than temporary pivots?

As Allison phrased it: “So, as we think about the capabilities that we're putting in place today, it's not just to be competitive in the next couple of months—it really is to set ourselves up in what may end up being the new normal in our industry.”

Domino’s admitted during its Q1 recap it’s not entirely sure what that looks like. The company pulled its two- to three-year financial outlook in response, saying plainly, there’s “too much uncertainty in the current operating and economic environment.”

But Allison did share he doesn’t think consumers are going to snap back to old habits once dining-room bans lift. And what Domino’s has done in recent weeks will continue to be important for “many months to come when we think about how this ultimately evolves.”

WHY DOMINO'S COULD HIT THE GROUND RUNNING AFTER COVID-19

Simply, the restaurant industry might never resemble February again. Even if it does, Domino’s believes it should prepare like it won’t.

This isn’t necessarily grim news for the 60-year-old brand, however. Allison said they’ve spent the past six weeks rewriting most of the company’s standard operating procedures. Domino’s moved to a 100 percent contactless delivery model across the country. It even rolled out a “pizza pedestal,” so drivers don’t have to put guests’ orders on the ground. It’s a simple cardboard feature that sounds like a basic innovation, but can go a long way to easing consumer’s minds during COVID-19 times. People appreciate knowing their pizza isn’t touching a surface that likely hasn’t been cleaned, Allison said.

Domino’s made contactless drive-up carryout technology available to all U.S. stores. Customers are also temporarily banned from sitting and eating in stores. The company implemented social distancing protocols in-store and across its supply chain for employees. In addition to thermometers, Domino’s is supplying restaurants with masks and gloves. And it recently changed from operational audits to safety awareness visits.

At this point, Allison said, even if contactless delivery no longer becomes a corporate mandate, Domino’s will still offer the service. “… I think for some extended period of time, there’s going to be some portion of the customer base that is going to want that contactless experience in delivery and/or in the carryout side of the business,” he said.

Domino’s anchored these changes with tech, as it always does. It rolled out a system that makes tipping delivery drivers easier and more prominent in the ordering experience.

In recent weeks, Domino’s has run its digital mix up to 75 percent of total sales (up from 70 percent last quarter). There was one week it topped 80 percent.

Along with its Q1 results, Domino’s Thursday offered a window into its Q2 performance so far, which provided some telling metrics.

Firstly, the chain’s Q1 same-store sales climbed 1.6 percent, year-over-year, in the U.S., marking 36 consecutive quarters of positive gains. That was Domino’s lowest figure since Q2 2011, but it wasn’t unexpected. 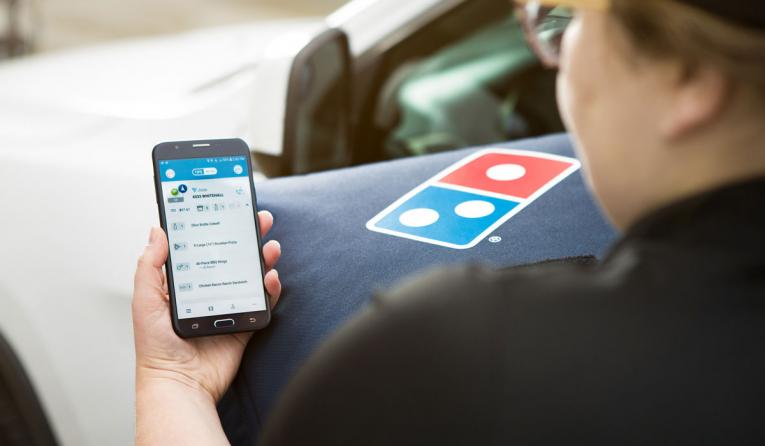 Domino's tech investments have helped it move to contactless delivery and carryout quickly.

CFO Jeffrey Lawrence said delivery and carryout mix have held relatively steady on average during this crisis. Weekday sales are up significantly, while weekends have decreased. Lunch and dinner occasions higher, late night more pressured. And, overall, Domino’s is accepting much larger order sizes throughout the week as consumers try to make food last.

Similar to comments made by Chipotle CEO Brian Niccol earlier in the week, Allison credited day-to-day routine attrition for the bump. “As time goes forward, people start to get a bit tired of cooking and eating the same thing. Some of the pantry loading that they've done, it starts to bleed down a bit over time. I also think we, and I suspect the rest of the industry, probably are seeing some near-term impacts here from some of the stimulus dollars that have gone out,” he said.

Those are the external factors. Domino’s has also helped itself, Allison said, by pivoting quickly to the aforementioned contactless options. The chain also redirected advertising “quite significantly” to focus on these efforts, “which are very important to customers right now to have a safe and pleasurable food experience for their families,” he said.

Kantar recently reported that that ad spending from February 2 through April 11 for food delivery companies totaled $269 million, down 5 percent compared to the equivalent 10-week period in 2019. It said Domino’s, the top spender, boosted ad spend during this timeframe by 9.7 percent to $80.1 million.

Over the past six weeks or so, Domino’s marketing has produced roughly an ad per week.

Generally, Lawrence said, the shifts in ordering Domino’s has observed lately aren’t fancy insights. They’re losing business thanks to sporting events going dark. People gathering around the TV to watch the big game? Those occasions aren’t there. The same is true of office parties.

Meanwhile, when people do order, they’re selecting for multiple people and dialing up more food because they’re hoping to stretch it out.

“Although I will still tell you, it is early in this crisis. We just don't know how that consumer behavior will ebb and flow as we continue through this and get out of this,” Lawrence said.

“But what I can tell you, as Ritch just alluded to, is we believe that the global pizza industry is super resilient,” he added. “People are going to want eat pizza, before, during and after this crisis, and there's no one better positioned with our franchise partners around the world to hopefully fill that demand than we do.”

Allison said Domino’s has “absolutely” seen an uptick in new customers over the last few weeks. Just given the availability, or lack thereof, of restaurants and food types, the brand is getting a shot with some customers who weren’t doing business with Domino’s before. And given the rise in digital business, Allison added, the chain is actively working to migrate as many customers as possible to its Piece of the Pie Rewards platform to capitalize on the value push among today’s consumer.

“Ultimately, as I talk about all the time, the unit growth is going to be driven by the cash-on-cash returns at the unit level and how our franchisees view the economics,” Domino's CEO Ritch Allison said. “I can tell you that for our corporate store business, I would love to accelerate and go even faster. And if there are opportunities to do that, we are most certainly going to."

Domino’s was fortunate to enter the crisis in good financial standing. U.S. franchisees averaged an estimated $143,000 in EBITDA per store and more than $1 million in average EBITDA at the enterprise level in 2019. Domino’s has more than $325 million in available cash currently.

Naturally, it hasn’t hurt that Domino’s is a delivery and carryout business model that didn’t need to reroute the vast majority of its customers to new ordering channels.

Internationally, it’s been a tougher slog, though. At peak, Allison said, nearly 2,400 international stores were closed. As of April 21, the number roughly 1,750. In the first three weeks of Q2, international comps are down 3.2 percent. If they stay negative, it would snap a consecutive positive quarterly run that dates back 105 periods (comps were up 1.5 percent in Q1).

On the employee front, Domino’s has been in hiring mode. The chain brought in 2,500 people into its corporate business post COVID-19—part of a previously announced effort to hire 10,000 new U.S. employees.

The chain committed to paying additional bonuses to corporate store and supply chain hourly workers over a 10-week period from mid-March through at least the last pay period in May, Allison said. It’s also providing enhanced sick pay benefits to hourly corporate-store and supply chain employees through the remainder of the year. “At Domino's, we don't want anyone to have to choose between their health and their paycheck,” Allison said.

Domino’s 501(c)(3) Pizza Partners Foundation is also available for employees during crisis times. It’s a fund where workers can donate to help each other. The primary source of funding comes through payroll deduction from corporate and franchisee employees. Allison said Domino’s made a “significant” donation, too.

These employee investments, along with charitable programs (giving away 10 million slices to local communities) will put about $15 of pressure on the company’s Q2 earnings, Lawrence said. Temporary store closures should add another $5 million.

Moving forward, Allison said, Domino’s should see significant impact on its store openings in 2020 as construction and municipal permitting have slowed down dramatically during COVID-19. But what about the future? “It has been a pretty tight real estate market for a while now, and we don't know exactly how much that's going to open up. But our guess is that it probably does open up a bit as we look out in the medium to long term,” Allison said. Meaning, changing dynamics could lead to additional opportunities as sites become available. And there could be flexibility around how Domino’s approaches lease extensions and rent opportunities. There’s plenty of uncertainty, but there could be sudden runway as well.

“Ultimately, as I talk about all the time, the unit growth is going to be driven by the cash-on-cash returns at the unit level and how our franchisees view the economics,” Allison said. “I can tell you that for our corporate store business, I would love to accelerate and go even faster. And if there are opportunities to do that, we are most certainly going to."