Dunkin’ wants to add about 1,000 new stores in the next two years—more than 90 percent of which will be built outside of its Northeast base.

In a succession plan more than two years in the making, Dunkin’ Brands announced David Hoffmann, Dunkin’ Donuts U.S. president since October 2016, has been appointed chief executive officer, effective immediately. He replaces Nigel Travis, 68, who is retiring from the role he’s helmed since January 2009. Travis is shifting into a position as executive chairman of the board of directors and will remain actively involved with the company, Dunkin’ said in a release, focusing primarily on the continued development of its international businesses.

READ MORE: The Future is Caffeinated at Dunkin’. Here’s Why

“When we recruited Dave to Dunkin’ Brands 18 months ago with the intent that he would succeed me as CEO, we knew that we were getting a world-class leader with extensive restaurant industry expertise, and he has exceeded all of our expectations. From his development and implementation of the Dunkin’ Donuts U.S. Blueprint for Growth, to the relationships he has forged with our franchisees and the talent management skills he has exhibited, Dave has demonstrated he is exactly the person to lead the next phase of our global growth,” Travis said in a statement. “I look forward to supporting him in his new role and am confident that under his leadership Dunkin’ Brands will continue to meet the needs of our franchisees, our employees, our shareholders and, most importantly, our guests.”

To date, Hoffmann, who will remain president of Dunkin’ Donuts U.S., has led the implementation of a multi-year plan referred to by Dunkin as the “Blueprint for Growth,” meant to transform the company into a leading beverage-led, on-the-go brand. He has also led all aspects of Dunkin’ Donuts’ U.S. operations, supply chain, marketing, consumer packaged goods growth, digital innovation, and franchise development. Hoffmann was behind the next-generation concept design as well, noted for its drive thru dedicated to mobile ordering, and oversaw the addition of hundreds of net new stores during his tenure. 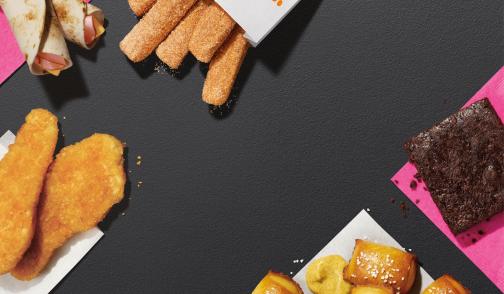 Before Dunkin’, Hoffmann spent 22 years with McDonald’s, including time as a crew member in high school. In 2008, he was named the chain’s vice president of strategy and franchising in Japan, and later held general management roles covering a wide range of international markets. Hoffmann eventually assumed the position of president, high growth markets, for the fast-good giant, which included work with China, South Korea, Russia, and several additional European markets.

“I want to thank the Dunkin’ Brands Board of Directors for the opportunity to lead this incredible company. I also want to offer my heartfelt appreciation to Nigel for his decade-long leadership of Dunkin’ Brands as well as for the support he has shown me since I joined the Company,” Hoffmann said. ““Thanks to Nigel, our franchisees around the world have flourished; our asset-light model has yielded strong shareholder returns, and we are well-positioned for long-term growth. I look forward to collaborating with Nigel, the Board, our leadership team, employees, and of course our great franchisees to further differentiate both our brands through cutting edge marketing, menu innovation, digital leadership, value, and restaurant excellence. We have a strong legacy and an even more exciting future together.”

In Travis’ time as CEO, Dunkin’ Brands completed a successful IPO in 2011 and returned nearly $2.7 billion to shareholders since going public. Dunkin’ entered 25 new international markets in the past decade and grew its unit count by nearly 6,000 stores globally, including more than 2,800 net new restaurants in the U.S. He also directed the launch of Dunkin’-branded consumer packaged goods, like Dunkin’ K-Cups and Ready-to-Drink Bottle Iced Coffees. Additionally, Dunkin’ introduced mobile payment apps at Dunkin’ Donuts and Baskin-Robbins during his tenure, brought the DD Perks Loyalty Program to market, and launched Dunkin’ Donuts’ On-the-Go Mobile Ordering, as well as delivery programs for both brands in markets around the globe. Dunkin’ added about 500,000 new members to its loyalty program for a total of nearly 8.5 million guests this past quarter.

Lately, Dunkin’ has worked extensively on simplifying its menu, which resulted in a short-term sales hit in the first quarter. Dunkin’s 10-percent cutback of its menu, tested in five markets in 2017 across 5,000 restaurants, is now live at 100 percent of U.S. restaurants. Same-store sales declined 0.5 percent in Q1 versus the prior-year period.

As for growth, Dunkin’ said it expects to open about 50 next-generational restaurants, which covers new and remodeled stores, in fiscal 2018.

Dunkin’ wants to add about 1,000 new stores in the next two years—more than 90 percent of which will be built outside of its Northeast base. At the end of the first quarter, Dunkin's 100 percent franchised business model included more than 12,500 Dunkin' Donuts restaurants and more than 7,900 Baskin-Robbins restaurants.