The fast-food giant has returned to positive sales in the U.S.

McDonald’s same-store sales charted into positive territory in July after four months of COVID-19-hampered results. And it appears the progress was a sign of lasting recovery. The fast-food chain Thursday shared a third-quarter preview ahead of its full November 9 report.

McDonald’s same-store sales tracked positive throughout the quarter, benefitting from strong average check growth thanks to larger group orders and improved performance at the dinner daypart. Strategic marketing investments and promotional activity drove “low double-digit” same-store sales in September, including positive comps across all dayparts, McDonald’s said. Guest counts remained negative, although that's a bit of a muddied statistic during COVID times given how much the customer has changed.

McDonald’s September result was its best monthly run in roughly a decade. “Our third-quarter performance demonstrates the underlying resilience of the McDonald's brand,” CEO Chris Kempczinski said in a statement. “Our unique strengths, including our unrivaled drive-thru presence around the world, advanced delivery and digital capabilities, and marketing scale have become even more important during the pandemic. Our prior investments in these areas position us to further our competitive advantage and enable restaurant crew to continue to safely provide customers our great tasting food.”

In terms of the promotional activity McDonald’s credited, the company hinted earlier it was hording a “marketing war chest” to invest in the back half of 2020. In Q2, most of McDonald’s major markets reduced spend and value activities as the brand assumed a defensive posture—like countless companies attempting to wade the pandemic waters.

Just in the U.S., McDonald’s decreased marketing spend 70 percent. Kempczinski noted in July funds would be reinvested in Q3 and Q4. Additionally, McDonald’s corporate planned to funnel an incremental $200 million across its U.S. and Operated Markets in the second half of the fiscal calendar to accelerate recovery. That amounts to about the equivalent of an additional month of media in every owned McDonald’s market.

Kempczinski told investors to expect the bulk of dollars to focus on core menu items and spotlight service channel opportunities, like digital, rather than innovation. Marketing support for McDonald’s base business to get back on the front foot, in other words. Also, a way to lean into something Kempczinski referenced on multiple occasions previously—the notion customers are looking for trusted favorites and familiarity amid the crisis. Pushing forward McDonald’s core equities.

The chain was busy in Q3 making good on these targets. It teamed with rapper Travis Scott on a multi-level partnership that included a curated Scott meal (Quarter Pounder with Cheese, sizzling bacon, and crisp lettuce; medium fries with BBQ Sauce, and a Sprite) for $6 at locations nationwide. It marked the first time since 1992 a celebrity’s name was featured on McDonald’s menu. The last was Michael Jordan. And to the earlier directive, Scott's meal features all McDonald's classics.

In response to the demand, McDonald’s was forced to control supply of its Quarter Pounder beef, bacon, silvered onions, and shredded lettuce. Instead of locations placing orders with the supply chain, McDonald’s sent ingredients to restaurants based on internal calculations. Even previous coronavirus challenges, namely beef shortages, didn’t result in a break in McDonald’s supply chain.

Then, the week of September 15, McDonald’s launched Spicy McNuggets and a Chips Ahoy McFlurry. Within two weeks, those were selling out in many restaurants as well.

So the brand had two promotions essentially selling out side-by-side in the heart of a pandemic.

Also, according to App Annie, downloads of McDonald’s app increased 20 percent from September 15 to September 30 (the timeframe Scott's deal went digital) compared to the prior two weeks.

On October 5, McDonald’s tapped Reggaeton global ambassador J Balvin for a similar deal. His meal includes a Big Mac, medium fries with ketchup, and an OREO McFlurry, and is slated to run until November 1. Balvin has sold more than 35 million records worldwide.

Once more, Balvin's setup is a celebrity-infused spin on one of McDonald's most recognizable menu offerings.

In Q3, McDonald’s launched a new TV advertising creative separate from the promotions as well. 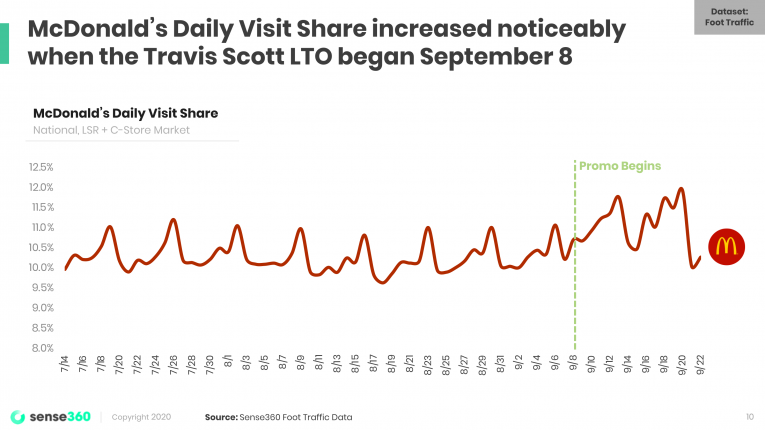 This chart below illustrates how it helped McDonald’s take share back. The main point being the LTO generated about 8 percent more visits than typical. 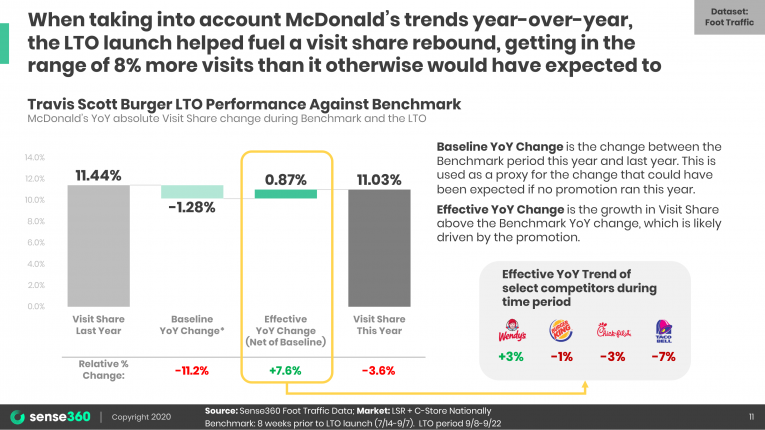 Another interesting baseline of Q3 is how McDonald’s was able to broaden reach. In Q2, Kempczinski alluded to affordability and value taking on renewed importance deeper into the COVID arena. Where will discretionary spending be? Will there be a long-running recession?

In turn, he suggested a stance, with affordably at the forefront, was likely to play a key role in McDonald’s marketing calendar.

McDonald’s Q3 results stacked up well against its 8.7 percent decline in the prior quarter. Same-store sales declined 13.4 percent in March; 19.2 percent in April; 5.1 percent in May; and 2.3 percent in June.

Reflecting a strong start to Q1 before the floor fell out in mid-March, McDonald’s started the year with a negative 0.1 percent comp. That snapped a positive streak of 19 consecutive periods.

Limited operations also remained in place for some markets. France, Spain, Germany, and the U.K. comped negative, while Australia was positive. On the last segment, Latin America and China were in the red and Japan in the black.

At the end of Q2, nearly all of McDonald’s restaurants were back on line for either limited dine-in service or off-premises-only business. The chain had to close and reopen 9,000 stores during COVID.

One reason international markets have lagged is that nearly 70 percent of customers’ orders came in-restaurant pre-virus. Only 15 percent of China restaurants host a drive thru.