The chain is working to transition its asset base to more carry-out, delivery-friendly units.
Fast Food | July 2019 | Danny Klein

The challenge ahead for Pizza Hut is no secret. The chain’s footprint doesn’t align with its operational investments or where the customer is headed. YUM! Brands chief executive officer Greg Creed put it this way during Thursday’s quarterly review: “And following the tremendous recent improvements in operations and technology led by Artie Starrs and the Pizza Hut leadership team, we plan to lean into and accelerate the transition of our Pizza Hut U.S. style to a more modern delivery and carry-out focused asset base.”

Essentially, Pizza Hut is putting its money where the future is. Many of its restaurants just aren’t built to leverage that reality.

This has led YUM! to think long-term with portfolio, and that’s going to be a bumpy road over the next 24 months. The company announced Thursday it expects its U.S. store count to drop to as low as 7,000 locations during that span as it morphs into a modern, delivery, carry-out friendly fleet.

The undertaking won’t be a small target. Pizza Hut closed the second quarter of fiscal 2019 with 7,449 restaurants. Roughly 6,100 of those are traditional units and 1,350 express locations. In that first pool, close to half are dine-in venues.

When the 'Red Roof' problem came to surface.

Creed said YUM! couldn’t estimate how quickly stores would shutter and when a replacement might open. Gaps could form and one might not pop up after a closure, although the company will try to minimize those, he said.

“Ultimately, we know that the economics of building a modern delivery asset work quite well for us,” Creed said. “And any, for the most part, any trade area where a store closes, there should be the opportunity to rebuild the store in that area or somewhere nearby.”

Pizza Hut remains committed to an asset-light model and 98 percent franchised path, meaning the economics of building a new unit stand on their own, and YUM! should have little trouble getting existing or new franchisees to rebuild in those markets. Case by case, YUM! could also deploy some capital in the short term to flip a market and get it in the hands of another operator, and take its capital back out.

In sum, Pizza Hut is going to look like a very different restaurant company in a few years. And during this transition, expect a deceleration in the pace of new unit development. International expansion will be offset by a near-term decline in the absolute number of U.S. restaurants.

How urgent of an initiative is this? The broad reworking of Pizza Hut’s footprint tells most of the story. But so do results. Currently, 90 percent of Pizza Hut’s business is off-premises. U.S. and international locations see roughly seven and six point differentials between the off-premises and dine-in, respectively (dine-in representing the lagged mix).

“We are excited about collaborating with franchisees who are capable, well-capitalized, committed to the brand, and who have the growth mindset to accelerate the closure of underperforming dining stores and replacement with new delivery of fast casual delivery assets.” — YUM! Brands CEO Greg Creed.

Close to 90 percent of Pizza Hut’s new units are built to its “Delco” model, which focuses on take-out and delivery. The model is also smaller and requires a lower investment point. Pizza Hut is even testing a cubby-style pick-up concept in California right now.

Here was the issue facing YUM! before it made this call to replace units: While the vast majority of its business flows through delivery and carry-out channels, close to half of its assets remain of the dine-in variety.

Also, there are some restaurants, COO David Gibbs added, built in trade areas that fit 30 or 40 years ago. But those spots today are not ideal for modern delivery models. “And if we can get those stores closed and then put in the right spot in the trade area for delivery, obviously there is going to be upside to sales for those units and better economics for the franchisee, better system sales, and a better image to our consumer,” he said.

Gibbs said the short-term financial impact should be minimal since the closures will feature lower-volume, underperforming stores. Eventually, it should significantly improve Pizza Hut’s system sales and profitability as those units get replaced with stronger restaurants.

Earlier in the year, Pizza Hut said it improved the number of orders delivered in less than 30 minutes by 3 percentage points.

The chain recently updated its $5 Lineup value offering to the $5 and Up Lineup. The change allowed franchisees to address local economic factors, particularly in higher wage markets, by offering the same items at more flexible price points. Starrs was also announced as the brand division’s CEO.

Returning to the asset base transition, Creed said, “We are excited about collaborating with franchisees who are capable, well-capitalized, committed to the brand, and who have the growth mindset to accelerate the closure of underperforming dining stores and replacement with new delivery of fast casual delivery assets.”

“By the same token,” he added, “we also know we’ll need to directly address franchisees who are burdened with too much debt, don’t have access to capital or aren’t committed to the long-term. Thus, in a few cases, some of these businesses will need to be restructured in the near-term to address capital structure and leverage issues, particularly, those franchisees with greater dine-in exposure.”

Pizza Hut ended Q2 with more than 300 locations on GrubHub and plans to expand further. Customers place their orders via GrubHub, but Pizza Hut drivers still complete the delivery. 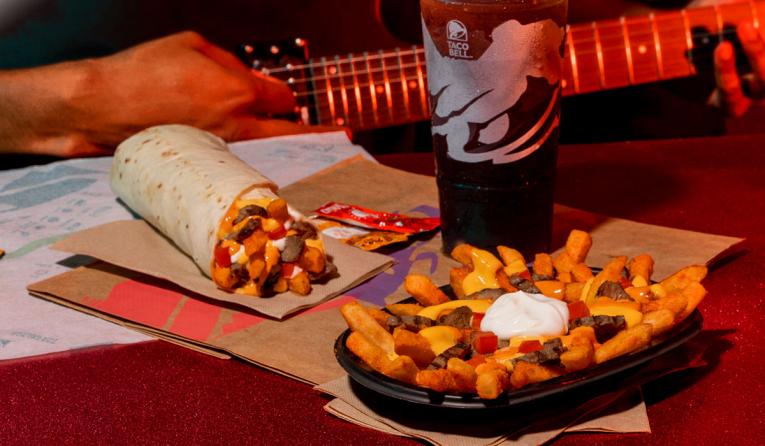 Taco Bell has posted positive same-store sales in 17 of the last 18 quarters.

KFC had a particularly strong period. Eight of its 13 international markets reported at or above 6 percent same-store sales growth. Japan was 18 percent. Africa 10 percent.

In the U.S., the chicken chain’s comps lifted 2 percent thanks to a continued focus on core menu items balanced by an accelerated pace of promotion. Chicken and Waffles returned in Q2, followed by Cinnabon Biscuits. And KFC launched a new channel for a la carte menu items with its 2 for $6 Mix and Mix setup.

The new value proposition drove transactions for the quarter, Creed said, and allowed guests flexibility to build their own meals—a demand KFC recognized whitespace in. Additionally, the chain plans to introduce a branded web experience by year’s end to capitalize on delivery sales. There are now 2,300 KFCs offering the service and 3,500 available for “click and collect.”

Taco Bell speeds it up

Taco Bell has reported positive same-store sales in 17 of the last 18 quarters, including 12 consecutively.

Creed pointed to the chain’s focus on value and innovation, especially the Grande Nachos Box, which ran $5. Its sales mix peaked at 10 percent.

Notably, Creed provided an update on Taco Bell’s “All Access,” strategy meant to create a frictionless experience for customers. Taco Bell currently has kiosks in more than 4,900 restaurants and expects to have the full U.S. rollout finished this year (there are 6,629 domestic locations).

Delivery is live in 4,500 units. Taco Bell has more than 11 million registered users for its mobile and online ordering system.

Gibbs provided some interesting drive-thru figures, too. He said, in the U.S., 6 million more cars drove through Taco Bell drive thrus compared to Q2 2018. Customers also received an experience that was on average 7 seconds faster.

2100 S. Clearwater Drive
Des Plaines
IL
847-803-5000
Chicago Faucets supplies quality products from the front to the back of the house. (more)
Pizza Pans