Dine-in sales are down to less than 10 percent of total sales in the U.S., and dragging comps in return.
Finance | October 2018 | Danny Klein

Pizza Hut rolled out updates to its Hut Rewards loyalty program in October. For the first time ever, Hut Rewards members will earn points for purchases in-store.

Pizza Hut’s $130 million transformation has reshaped the business from the foundation up. Delivery times, quality, accessibility, and price points have progressed to a better place, Greg Creed, YUM! Brands chief executive officer, said. But are customers giving the brand credit for the changes? And is Pizza Hut attracting new guests? Those are two of the biggest questions facing the 16,930-unit chain as it tries to turn this investment into serious momentum.

As a whole, YUM! Brands reported a strong third quarter, with 5 percent system sales growth and 2 percent same-store sales lift, along with 4 percent net new unit growth. Net income rose 8.6 percent to $454 million, or $1.40 per share, up from $418 million, or $1.18 per share, in the prior-year period. Revenue fell 3 percent to $1.39 billion, but still came ahead of Wall Street’s call for $1.38 billion.

The overarching sentiment, however, was that KFC and Taco Bell especially, triggered the run with system sales increases of 7 percent (3 percent same-store sales), and 8 percent (5 percent same-store sales), respectively. Meanwhile, Pizza Hut’s sales crawled 1 percent internationally, year-over-year, and declined 1 percent in the U.S. Its comps fell 3 percent internationally and climbed a point stateside to get to positive 2 percent year-to-date. YUM! CFO David Gibbs said the company now expects its underlying base operating profit growth to be at or slightly below the low end of its previously communicated high single-digit range, “owing to reduced contribution from Pizza Hut, particularly in the international business.”

“As we have consistently discussed, the Pizza Hut U.S. turnaround will be a slow build and we are encouraged by the foundation that's been put in place and continue to make strides to improve the brand's position,” Creed said. 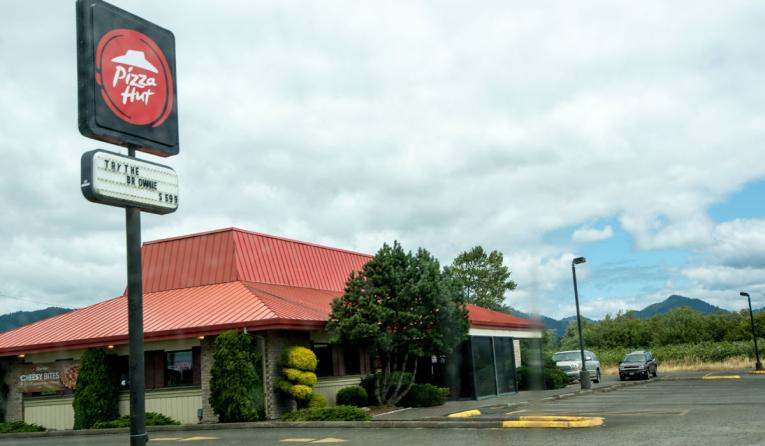 Dine-in business is down to less than 10 percent of U.S. sales at Pizza Hut.

What's slowing Pizza Hut down, and the gap between dine-in and carryout

The red-roof model. Creed was straightforward in discussing what’s going on with Pizza Hut’s once-classic look, and the stark split in international versus U.S. business.

“I think one important difference between the U.S. and international is our international dine-in stores are actually in fairly good shape. These are good assets in good locations and in many countries we actually have a very strong dine-in business that we have confidence in for the future,” he said. “That's quite a contrast to the U.S. where we have a lot of red roof restaurants that are in the wrong part of the trade area, haven't been remodeled, and clearly need to go away.”

At this point, 90 percent of new units are built to the “Delco” model, which is a smaller layout with a lower investment point geared toward delivery and carryout. But replacing units requires significant capital. Eighty percent of all replacement units are delivery/carryout focused, Creed said.

The gap between dine-in sales and sales from delivery and carryout is wide at Pizza Hut, with both the U.S. and international seeing a roughly 10-point differential. “Dine-in is waning in relevance in a lot of markets and importantly complicates pricing decisions in our ability to offer disruptive delivery value, especially in international markets with a high percentage of dine-in sales. We have a long way to go given some of the challenges in legacy dine-in markets such as Europe and China,” Gibbs said. "However, the good news is the estate is shifting toward delivery/carryout, given that 90 percent of net new unit openings and 80 percent of all replacement units are delivery/carryout-focused."

About half of Pizza Hut’s sales are coming from dine-in globally, Creed said. Within three to four years, he expects it to drop to 25 percent. That’s thanks to a natural shift, the Telepizza deal, as well as building out its net Delco base and replacing dine-in restaurants with delivery ones.

“We want to give everybody the clear signal that we do have a plan to migrate out of those dine-in stores, but we thought it was important to highlight frankly that the delivery carryout business at Pizza Hut International is actually fairly healthy." — Greg Creed, YUM! Brands CEO.

In the U.S., this conversation is far more pronounced. Dine-in sales are down to less than 10 percent of total sales and are dragging the comps number, Creed said—a fact that “masks the relative healthy of our delivery and carryout business.”

“We want to give everybody the clear signal that we do have a plan to migrate out of those dine-in stores, but we thought it was important to highlight frankly that the delivery carryout business at Pizza Hut International is actually fairly healthy,” Creed said. “That business is doing well, but the results we report don't show the success that we're having in that part of the business.”

Gibbs said YUM! has supported franchisees as they move of the dine-in asset base into the delivery model. “Remember that building a new delivery carryout unit is a very good economic proposition in general,” he said. “It's a low-cost investment and it generates a three, four-year cash payback in general. So the economics are there to make it happen, but when you're dealing with over 3,000 dine-in restaurants it's just going to take some time.”

Getting the word out

In Q3, Pizza Hut drove the value proposition. It continued to focus on its $7.99 large, two-topping deal, and also ran a competitive promotion with a large, two-topping pizza for $5.99 carryout. Just recently, although not counted in these results, Pizza Hit launched a $5 Lineup that features items like Cinnabon Mini Rolls and Stuffed Garlic Knots. 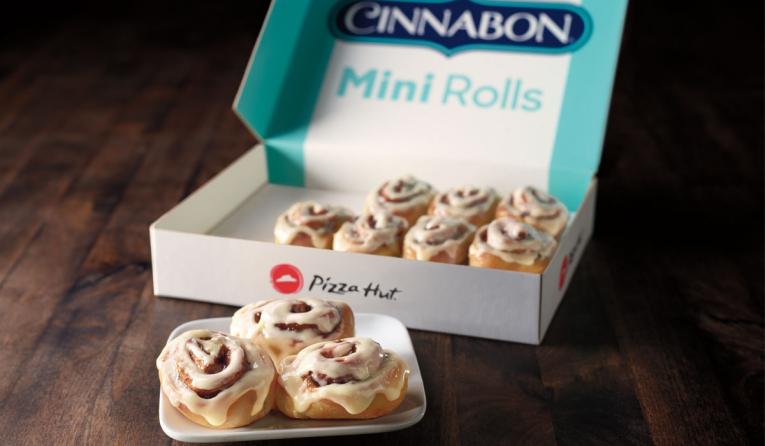 “This value and the operational improvements have made the brand more relevant and easy,” Creed said. “However, the messaging has not been distinctive enough to attract new customers, which is a key focus moving forward.”

Pizza Hut has several other compelling notes to share, Creed said. Although there’s plenty of work ahead to get them communicated.

“… we're now the NFL partner,” he said. “It's with us and not a competitor. Is that a good thing? Yes it is. We know what the right price points are to be successful in the marketplace. Do we have all of our franchisees on those price points right yet? No, we don't. But are the stores that are on the right price points doing better? Yes, they are. And as we said, I personally feel that we just got to do a better job of communicating this compelling value. We've got a new agency, they're onboard, the team is all over it, and I think you will see us going forward with what I'll call sharper and more distinctive advertising and communication around this compelling value that we offer.”

Creed said the current customer base is happy with the foundational improvements made by Pizza Hut. The opportunity, however, resides in bringing new customers into the business by communicating and messaging the improved value proposition. “We know what the task is and when you know what the task is, you go chase it and you deliver it,” Creed said.