Steak 'n Shake is Turning Into a Fast-Food Chain

Steak ‘n Shake made headlines in the fall of 2018 when it announced a massive refranchising initiative. It wasn’t the proposed structural change, though, that garnered news—it was the fact Steak ‘n Shake put locations on the block for $10,000 in hopes of fostering a single-operator system similar to the one Chick-fil-A built an empire on.

At the end of last year, chairman of the board Sardar Biglari estimated it would take roughly three years to transition 400 or so company-run stores to a network of franchise partners. Since, most of the attention has centered on Steak ‘n Shake’s store closures, mounting losses, and declining traffic: 107 restaurants were “temporarily” shuttered as of December 31.

Biglari provided some updates in the company’s 2019 annual report. Among the key points, Steak ‘n Shake still plans to reopen “most” of the temporarily closed restaurants, he wrote in a letter to shareholders. Only there’s one big update: They’re all going to be counter service.

Steak ‘n Shake has deployed servers since its 1934 debut in Normal, Illinois. All models were sit-down for the company’s first 78 years. A quick-serve format arrived 2012 and grew through universities, casinos, airports, gas stations, shopping centers, and other nontraditional outlets. By the end of 2018, there were 87 quick-service locations—including international operations.

Biglari said this latest decision stems from the same issues that forced Steak ‘n Shake to start closing stores in the first place. “We refused to keep any unit open that could not deliver excellent customer service,” he said.

The brand’s problems began in the back of the house. Biglari said Steak ‘n Shake’s dedication to high-quality products and low prices failed to align with its current kitchen design, which was not built for high-volume production. In other words, it could not compete on speed or convenience with industry peers—only price. And that’s a battle it was getting swallowed in.

As a result, the flip to a fast-food brand is on.

Steak ‘n Shake 2019 performance marked the fourth consecutive year of negative same-store sales. After the brand’s comps plummeted 7.1 percent in 2008, it put together seven straight years of positive gains, including a 7.5 percent run in 2010 that stacked on a 4.1 percent increase the year before. It wrote one of the industry’s most compelling turnaround stories to emerge out of the Great Recession. Present management took over August 5, 2008. Steak ‘n Shake was losing $100,000 per day. By the end of 2009, the company said, it was generating the same. From 2009 to 2019, Steak ‘n Shake dispatched nearly $300 million of cash to Biglari Holdings.

You can see below how this conversation has shifted lately, and not in a good way. 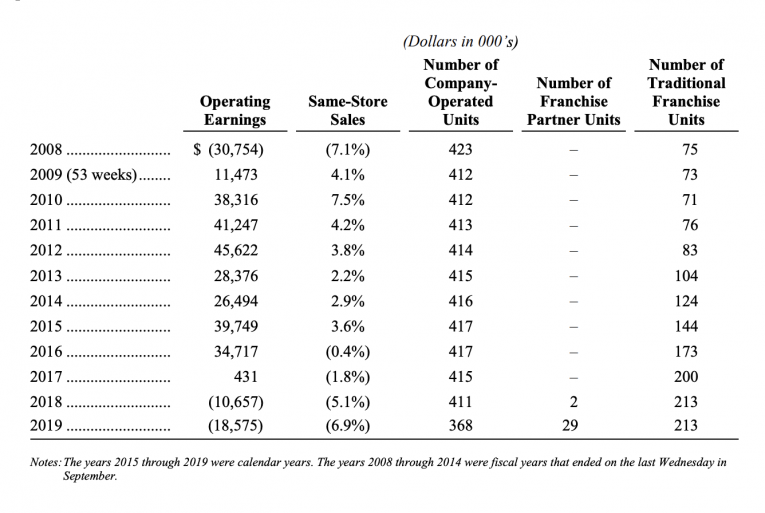 Steak 'n Shake's sales have tracked on a downward trend.

Not included on that chart is Steak ‘n Shake’s traffic trends, which declined 11.2 percent in 2019, year-over-year. That after the number of customers dropped from 116 million to 111 million to 103 million (the lowest in eight years), respectively, in the previous three calendar turns.

At the end of this past fiscal year, there were 368 corporate locations, 23 traditional franchises, and 29 “franchise partners,” or people who have reopened restaurants under the $10,000 upfront investment franchise program mentioned earlier. Sixteen net locations closed in 2019.

And as previously noted, 107 of those 368 corporate units are temporarily closed today.

Biglari offered some updates to the refranchising process, which has been kept pretty close to Steak ‘n Shake’s vest. Operators who sign up for the $10,000 program, where the company pays the construction and equipment costs, agree to a fee of up to 15 percent of sales as well as 50 percent of profits. “Under our arrangement, a franchise partner is able to earn considerable sums, which is the way we want it,” Biglari said.’

“In the end, nothing is as important as the way our customers are treated,” he added. It takes the right leadership in a unit for customers to be served in a warm, caring, and hospitable manner. To achieve our goal, we are building a culture of ownership at the unit level. For operators to think and act like owners, we believe they must be owners. We are on our way to becoming a company of owners, changing the culture of the organization in our quest for service excellence.”

“But make no mistake: We are not minting millionaires but are merely providing the means—they are earning every penny,” says Sardar Biglari, executive chairman. “The American dream is alive and well at Steak ‘n Shake.

Biglari said same-store sales for these operators increased 2.2 percent in 2019 compared with a decrease of 6.9 percent at corporate locations. Additionally, the 50 percent share of profits exceeded the sum these restaurants generated in 2018, the company said, despite Steak ‘n Shake then claiming 100 percent of profits. That offers a small window into how dire the company-run situation was.

Steak ‘n Shake said some of the operators are “on their way” to earning north of $200,000 in their first year. Biglari said a “good number” will become millionaires.

“But make no mistake: We are not minting millionaires but are merely providing the means—they are earning every penny,” he said. “The American dream is alive and well at Steak ‘n Shake. Becoming a franchise partner does not involve great capital but it does require great talent. The touchstone of our program is performance, an opportunity available to all based on ability rather than birthright, race, religion, or any other arbitrary characteristic”

It’s a straightforward utopia for Steak ‘n Shake—“a federation of individualist entrepreneurs,” Biglari said. Basically, the idea that restaurant owners running one unit with skin in the game will be invested in getting it right.

Steak ‘n Shake isn’t changing its three-year target, but did say it expects early success in the program to inspire further enrollment.

Biglari said the traditional model will served as the company’s growth vehicle moving forward. International accounts for about a seventh of the brand’s franchises.

Over a four-year period starting in 2011, Steak ‘n Shake’s franchise business operated at a loss. Biglari said “intrinsic value” advanced, however. The company allocated capital to develop the franchising business “with the expectation of creating greater dollar value for each dollar spent.”

These days? It’s “a prodigious cash generator,” he said. In 2019, franchise operations posted a record profit of $8.5 million for Steak ‘n Shake, Biglari wrote in his letter to shareholders.

The result is a stark split the company is trying to mend: A company-run segment that isn’t profitable and a franchise side that is. “The Steak ‘n Shake team is working assiduously to achieve profitability in both divisions—and in short order,” Biglari said.