The fast-food chain is removing 12 items, including the 7-Layer Burrito.

Taco Bell is joining the ranks of restaurant chains slimming down their menus amid COVID-19 in favor of efficiency. The chain announced Friday that it’s simplifying offerings to streamline operations across its 6,766-unit system.

Here’s what Taco Bell will say goodbye to, beginning August 13:

In all, Taco Bell will shed 12 items from its dine-in lineup. The company said the evolved menu approach comes after “months of analyzing the new way we are running our restaurants.”

“With safety top of mind, we want to ensure an easy and fast ordering experience of our guests and team members,” Taco Bell said.

Here’s a look at how Taco Bell is meeting new safety demands.

The brand’s changes during the pandemic have reached into innovation and product testing, too. In the past, Taco Bell took an “all-hands-on-deck” approach in its test kitchen. Today, it hosts virtual brainstorms and kitchen simulations. Taco Bell shifted from in-person focus groups to contactless drive-thru tastings.

The company said menu changes will leave room for new fan favorites, continued progress in categories such as plant-based diets, and opportunities to bring back classics as LTOs.

Below is a look at Taco Bell’s new menuboards with the cut-back menu: 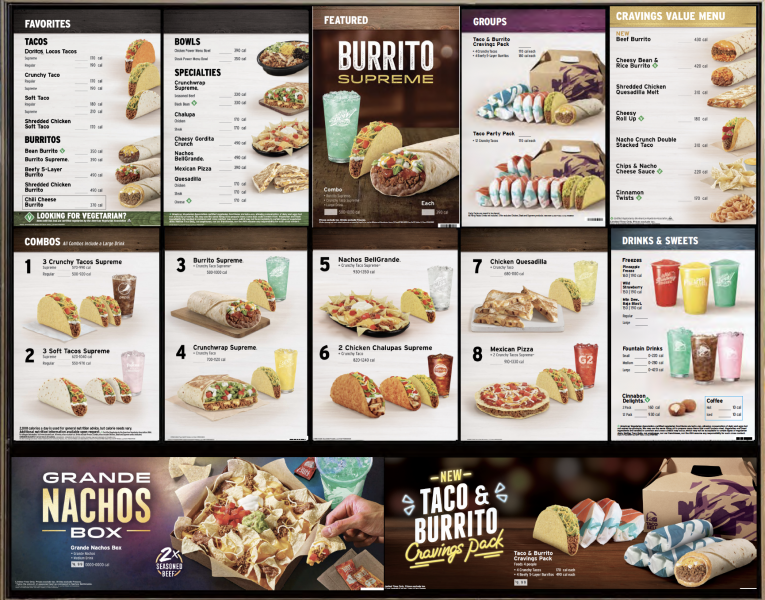 As noted above, Taco Bell’s quesarito will still be available for digital orders.

Taco Bell’s news comes after an employee on Reddit hinted earlier in the week some products were on the verge of being removed.

Other chains, like McDonald’s, have scaled back to help operators. The burger brand pared down offerings and pulled its all-day breakfast menu. IHOP shrunk its menu from 12 to two pages. Church’s Chicken also approved limited menus so operators could focus on executing new safety protocols.

Taco Bell last enacted major menu changes in September 2019. It rolled a broad revamp aimed at improving speed of service and simplifying the ordering process. The company called the changes “our version of decluttering a closet.” It removed some items and updated offerings with an assortment that included best-sellers and refreshed combo options. Notably, Taco Bell cut its list of nearly 20 combos in half to put the spotlight on iconic choices.