Where Fast Food Fits in the Coronavirus Crisis

Drive thru and delivery are likely to pick up.

Dining rooms might be closing, but quick-service chains remain open for business.

As more state- and city-wide restaurant closures take hold in light of coronavirus conditions, there’s little doubt operators across all segments are facing massive disruption. Perhaps to levels not seen in many concepts’ lifespans. One thing that’s also crystal, unfortunately, is the fact full-service brands are shouldering added heat, at least near-term.

The main culprit: Straightforward logistics. Many sit-down chains have made significant strides in recent years with delivery and take-out. Others have not. Nonetheless, off-premises is a sector where quick service has long reigned, and that’s a general asset conversation that’s endured for decades. For instance, many of America’s largest brands, like McDonald’s and Wendy’s, see upward of 70 percent of their business via drive thru. So when you read about chains like McDonald's and Chick-fil-A closing dining rooms, it’s not nearly as gloomy as New York City telling fine-dining landmarks to shut their doors to patrons. It’s simply a different situation.

WHAT CUSTOMERS ARE SAYING ABOUT THEIR BIGGEST FEARS

WHY FULL SERVICE IS GETTING HIT THE HARDEST

All of that said, however, how are quick-service chains faring during these uncertain times? Silicon Valley foot traffic analytics platform Placer.ai took an early look.

The company analyzed nationwide traffic for Starbucks, McDonald’s, Chick-fil-A, and Burger King from February 26–March 7. As always with COVID-19 news, reactions and trends change hourly. So this data set took place before Chick-fil-A and Starbucks decided to shutter all of their dining rooms. And news from March 7 until now has been a whirlwind of state mandates, news conferences, and other updates that many of us probably never thought we’d hear in our lifetimes, like possible curfews. Yet, even so, Placer.ai’s results provide an interesting window into how guests are reacting from a dining-out standpoint.

Looking at February visits year-over-year, all of the measured brands witnessed growth in that time frame. Starbucks was up nearly 6.7 percent, with visits coming in 4.3 percent below the monthly baseline for the period between January 2017 and February 2020. This was well above February 2019 performance, when visits were 11 percent below.

Starbucks had been on a strong run.

Chick-fil-A enjoyed 14.8 percent year-over-year February growth, with visits climbing to 13.1 percent above the baseline—significantly above February 2019 when visits were 3.7 percent below. The same growth took place at McDonald’s and Burger King, 5.6 and 2 percent, respectively, year-over-year for February.

Placer.ai noted fast food’s positive run wasn’t restricted just to February, when much of the month stood in the shadow of coronavirus’ looming threat. The company analyzed daily traffic from February 26 (Wednesday) through March 7 (Saturday) and compared it to the equivalent period in 2019. Three of the brands saw year-over-year growth during this 11-day slot, while Burger King witnessed a nearly negligible decline.

Chick-fil-A topped with 11.9 percent growth. Starbucks and McDonald’s bumped 4.2 and 2.9 percent, respectively. And, interestingly, all of this happened during a (then) peak in coronavirus concerns. 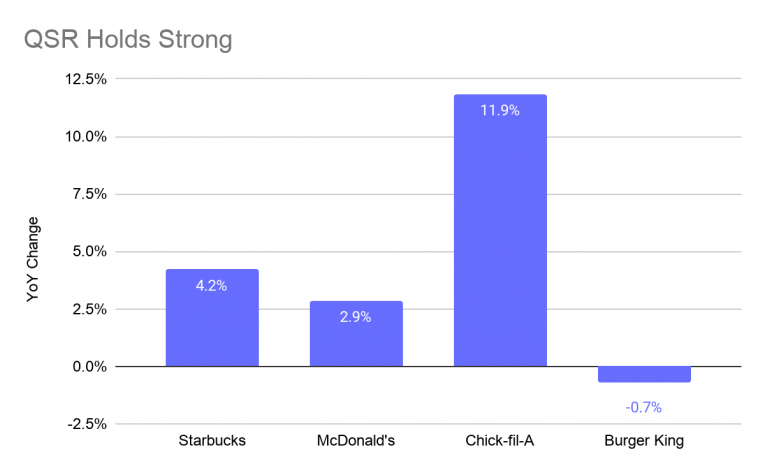 Placer.ai expanded its search and focused more on pure March numbers. Against the odds, quick service didn’t seem to taper off to the extent you might imagine. The company analyzed eight fast-food and fast-casual brands to see whether year-over-year traffic was growing or slowing. And the positive trend seems to have held.

Again, many quick-service chains are seeing year-over-year growth, and those with losses notched a stronger start to March than might have been predicted. 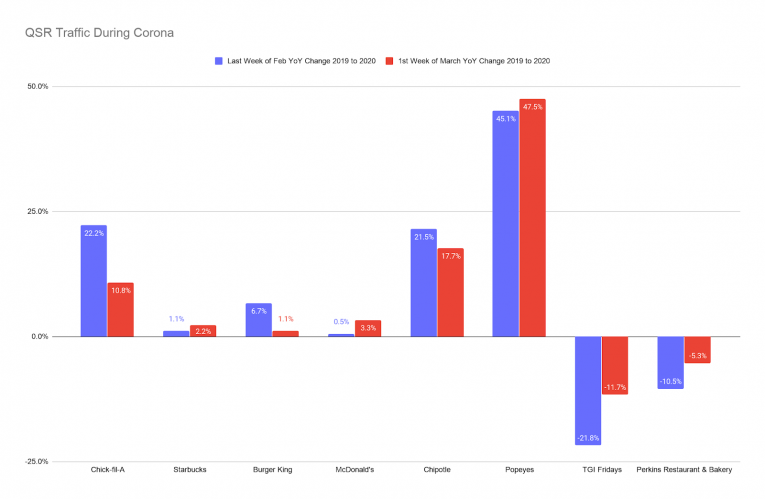 Placer.ai followed by analyzing the change in traffic between the last week of February and the first week of March. It discovered that only two brands experienced a metric drop over the previous two years. Typically, the brands have seen a dip in traffic from the last week of February to the first week of March, but four of the eight saw those fortunes turn in 2020. Two others boasted increases on previous numbers. Only two reported decreases. (Note: this data set includes two full-service brands, Perkins and TGI Fridays). 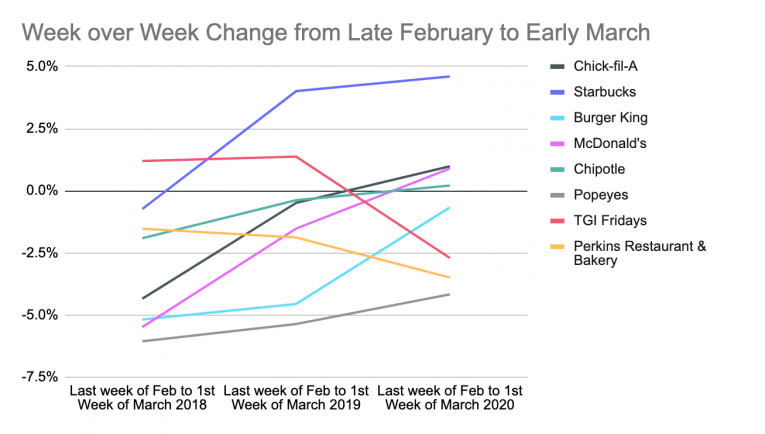 Casual dining has its struggles ahead.

As you can see above, and not surprising given what’s happening, it’s the sit-down chains that rerouted negative, in a hurry. Beyond the regulations pressing down on full service, and the fact they’re not broadly well equipped to deliver and provide take-out, it’s just not ingrained in their customers’ behaviors. Given that people remain wary of sitting in crowded places for extended periods of time these days, they’re electing for options that typically deliver on convenience. And that appears to be taking them to quick-service chains, where established players hold more off-premises clout.

“These jumps show signs of a resilient economy in the face of health concerns that are making headlines on a daily basis. It also runs directly counter to the notion that the entire retail economy is heading for a major downturn,” Placer.ai said.

“The data does not mean that everything will stay status quo with ongoing growth,” the company added. “It also doesn’t mean that there will be no negative effects should the virus continue to have an impact over the coming weeks and months. However, it does signal the absolute need to refine our thinking.”

Essentially, coronavirus is not going to have a single, blanket impact on all aspects of the economy. That goes for restaurants, too.

While it seems unlikely the coronavirus, all said, will boost quick-service restaurant business, there is surely an element of fast food stealing customers from sit-down chains during this crisis. Guests who typically frequent experiential options, like polished casual, food halls, or fine dining, might turn to quick service during in the interim. Consumers in urban markets who don’t want to leave the house and don’t have easy access to grocery stores, or simply want to avoid the fervor, could dial up delivery for a brand they wouldn’t have considered before.

How this plays out exactly is something we’ll track over time. But it’s an interesting factor to consider for quick-service concepts. 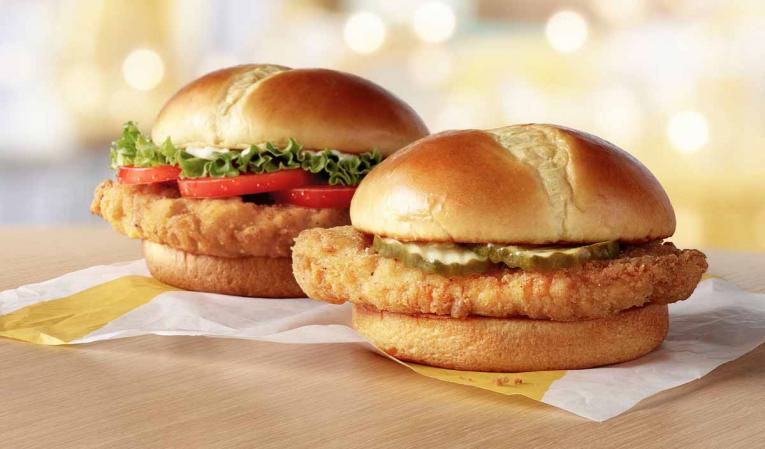 Chains with heavy drive-thru business, like McDonald's, could weather the storm better than others.

BTIG analyst Peter Saleh shared some thoughts Monday on what he’s hearing from the restaurant trenches.

Some of his points echoed Placer.ai’s findings.

“While we expect restaurant sales to be materially impacted, especially in regions with the greatest number of coronavirus cases such as Seattle, San Francisco, and New York, we do believe restaurant operators especially quick service can cut operating costs while getting abatements on royalties, rent, and advertising,” he wrote.

Who will feel the brunt? Casual-dining operators, especially as social distancing and virus concerns persist. It’s also worth considering, though, many of these chains don’t have locations in the major metropolitan areas currently hit hardest by COVID-19. Will that matter? Hard to say right now.

In the Mid-Atlantic and Chicago, trends are holding steadier. Sales in the San Francisco Bay area and Seattle markets, however, are down anywhere between 50-90 percent. “While we are not surprised by these data points, we believe these declines are transitory and expect sales to rebound quickly when consumers return to their daily lives,” Saleh said.

Keeping that in mind, Saleh believes consumers will pull back on restaurant visits as they batten down the social hatches. Yet delivery, drive thru, and pick up are likely to gain momentum. People aren’t just going to completely abandon restaurants for an extended period of time.

Breaking it down further

As noted before, somewhere in the range of 70 percent of sales in quick service are generated via drive thru, with a low-to-mid-single-digit mix from delivery. That suggests fast-food operators being somewhat insulated from the coming sales decline associated with social distancing.

“We believe it is likely that many quick service operators opt to close their dining rooms, reducing costs and potential virus transmission, while still serving customers through the drive-thru, which will likely be preferred,” Saleh said.

For Saleh, the first order of business for restaurants should be saving franchisees and employees. He predicts, in certain instances, including those franchisees with the steepest sales declines, we could see royalty abatements, material reductions in rent, and/or dramatic cuts in advertising contribution in an effort to support cash flows in the near-term.

Saleh estimates franchisees pay a low- to mid-teens percent of sales for rent (where applicable), royalty, and advertising combined. A reduction in these three costs coupled with the closure of dining rooms, and the lower operating costs that follow, could go a long way to aid franchise cash flows during this crisis.

The NPD Group dropped some data Monday to illustrate the difference between on-premises and off-premises restaurant dining in the U.S.

Of that, 48.5 percent was off-premises, such as carry-out, delivery, and drive thru, which measured to $218 billion alone.

Off-premises drove industry spending growth in the past year at plus 4 percent. Widespread closures would likely result in a volume decline, even in off-premises sales, NPD said. However, in the long run, this will accelerate the shift to off-premises as brands use this time to catch up or shore up current systems.

What we can say, it appears, is the coronavirus will leave a very different looking restaurant industry in its wake. But the key thing to latch onto: It will still be here, with the potential to be even stronger than before.