For Wingstop, Why Stop at 2,500 Restaurants?

The surging chain has no shortage of runway ahead.
Fast Food | December 2019 | Danny Klein

Wingstop has been one of the hottest brands in quick service over the last year.

For at least the last five years, Wingstop has thrown a pretty sizable figure at the board: 2,500 domestic units. As of September 28, there were 1,169 U.S. franchises and 141 international restaurants (30 company-run units as well). That growth compared to year-ago counts of 1,059 and 130, respectively.

The first quarter after Wingstop went public in 2015—Q2—it had 785 total restaurants, with 714 stateside. The previous June, there were 657, of which 612 were domestic.

So when chief executive Charlie Morrison says Wingstop wants to become, “a top 10 global restaurant brand,” it’s a remark with weight behind it.

Wingstop also has a history of slow-building AUVs at mature units. If you look at restaurants opened in classes prior to 2015, AUVs on an annualized basis would be just short of $1.4 million. “This ongoing Wingstop trend of seeing our performance out of the gates strong and just continuing to get stronger is indicated by a demonstration of a metric like that,” Morrison said in the company's Q3 review.

Here’s a look at the same-store sales rise in recent periods:

The question now is whether or not Wingstop 2,500-unit target was actually a modest one. BTIG analyst Peter Saleh upgraded the brand’s stock to buy from neutral Tuesday around this point of potential.

And it’s not so much about what’s driving current sales and traffic—digital accounted for 36 percent of domestic business in Q3, an increase of more than 1,000 basis points year-over-year—but more what’s coming down the pipe.

By November, Wingstop was five months into a new cooking platform test at three Dallas stores. It circles one of Wingstop’s historic anchors—speed of service. Beyond trying to match consumer preference in a convenience-fueled industry, quicker transactions simply have the potential to result in more orders, especially as Wingstop’s digital volume continues to stack. 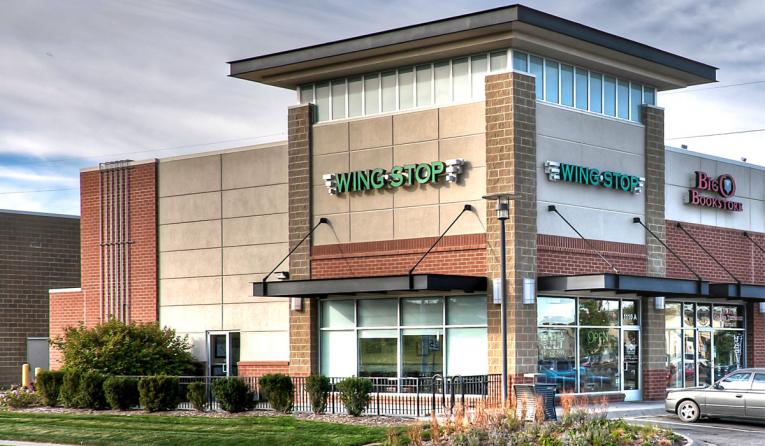 The unveiling/deployment of new kitchen equipment would enable faster throughput and expansion of development opportunities, Saleh said. Picture non-traditional venues and potentially even drive-thru restaurants. Essentially, Wingstop could trim square footage if it had a more efficient kitchen capable of serving added orders. “We believe this development could increase the concept’s ultimate domestic unit potential beyond the stated 2,500 restaurants,” Saleh wrote.

Morrison echoed the thought. “What I can say is that it definitely has the potential to help us enter into nontraditional locations,” he said. “So that would include locations in airports or perhaps casinos or stadiums, other venues like that where the cook times need to be faster. So that opens up a great opportunity for Wingstop that's not factored into our development assumption.”

Saleh provided some insight into just how much runway this presents for Wingstop. Using a London restaurant opened in September as the case study, the new equipment produces up to 75 percent reduction in cook times, down to 5–8 minutes from 16–21 minutes. He said this kind of dramatic fix “could help revolutionize the concept by opening up real estate the company otherwise would have avoided.”

When it comes to drive thrus in particular, the opportunity might just mirror what’s taking shape at Chipotle. The popularity of delivery coupled with a reduction in cook times could lead to Wingstop developing more units with a digital pick-up window, similar to Chipotle’s “Chipotlanes,” Saleh said. Using the Mexican fast casual as a measuring stick, Wingstop would look at costs of about $75,000 more per unit, bringing the total investment to $455,000 per drive-thru location.

Does that justify the investment? Saleh believes the resulting sales increase would improve cash-on-cash returns from 57 percent today to more than 60 percent.

Currently, roughly 75 percent of Wingstop transactions are takeouts. In late 2018, the company began a scaled roll out of delivery across its domestic system and ended Q3 with three-quarters of its fleet onboard. The plan is to eclipse 90 percent by year’s end. When that happens, Morrison said, expect Wingstop to turn up the dial on national TV advertising for delivery—something it hasn’t done in its history. The brand had just 30 percent of restaurants covered at 2018’s end.

Because of the already high takeout slice, Wingstop hasn’t seen as many delivery hiccups as some. Although it did raise prices through DoorDash about 10 percent to combat costs, and has tried to tout its direct option. “Based on two years of profitable testing, we know that delivery offers a high sales mix and highly incremental occasion to Wingstop as new guests that did not prefer takeout as an option will choose delivery,” Morrison said.

In penetrated markets, delivery typically represents low teens mix for Wingstop. If you consider that along with reduced cook times, a digital pick-up window makes a lot of sense. It didn’t really before.

Guests would order digital in advance; not on-demand like a typical drive-thru menuboard. That would give Wingstop a heads-up and allow it to make bulk ordering a more seamless and convenient experience. It’s not all that different from how Chipotle ballooned its digital accessibility by adding second make-lines and pick-up shelves across the system. Proof it’s working: Of Chipotle’s 150–165 planned new restaurants for 2020, more than half will have a drive thru, the company said last quarter.

Considering Wingstop’s digital mix (36 percent), and the carryout sales number of 75 percent, “we believe this strategy could increase restaurant volumes by as much as 20 percent and drive restaurant margins to the low- to mid-20 percent range,” Saleh wrote.

“… Wingstop has historically avoided the traditional drive-thru format as it is materially more expensive to develop a free-standing restaurant vs. an in-line location,” he added. “We believe that a pick-up window strategy would allow Wingstop to keep new unit costs relatively in-line by developing end-cap restaurants rather than free standing.”

There are other elements at play as well. A pick-up window often makes third-party delivery orders more efficient (drivers don’t have to get out of their cars). Quick-service restaurants often generate as much as 40 percent higher sales at drive-thru locations versus stores without. They also produce higher margins from the resulting sales leverage.

Another reality: Wingstop’s digital sales mix has seen a bigger lift than some pizza chains in recent quarters. Looking at the track, there’s no reason to think the brand can’t hit 40 percent-plus shortly.

If Wingstop’s digital sales doubled in the years ahead (there’s little reason to bet against that), it would mirror that of Domino’s and Papa John’s, which currently mix 65 percent. That would likely result in greater profit, too, given that digital sales tend to carry higher check. At Wingstop, digital orders result in $5 higher tickets, the company said. 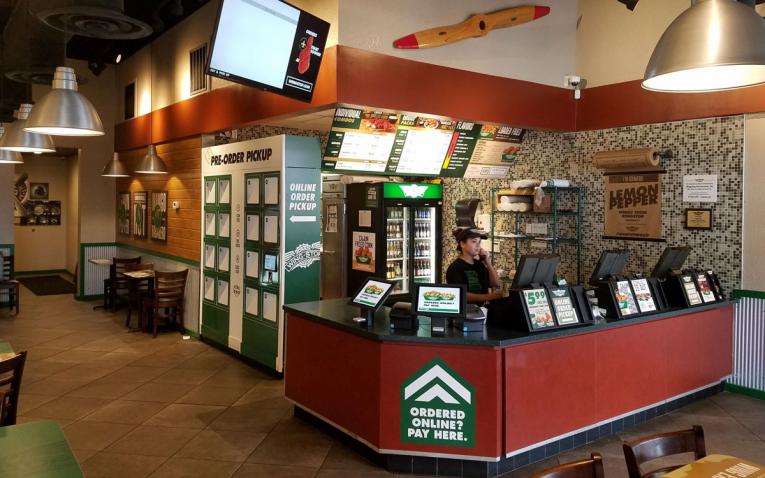 All of this stirs an optimistic outlook when you weigh Wingstop has delivered 16 consecutive years of positive same-store sales growth and just reported Q3 adjusted EBITDA of $15.4 million, up 25.8 percent from last year. Net income was $5.9 million.

Wingstop’s custom-built online ordering site and mobile app has only been live since early 2019.  It’s resulted in increased conversion from users who visit the brand’s consumer-facing digital assets, Morrison said.

The advertising angle is a key one to highlight. On January 1 of this year, Wingstop increased the national fund contribution rate from operators from 3 to 4 percent of top-line sales.

This led to more TV, media purchases, and an upgrade in the quality of its creative messaging platform. Wingstop responded with two 12-week national TV campaigns and increased local market advertising in periods when it wasn’t national. The company made CMO Christina Clarke’s post, who had been serving in the interim role, permanent in mid-November. Clarke has been with the brand since 2018 and led the “Where Flavor Gets Its Wings” campaign.

Morrison said the spot, which aired a second 12-week push at the beginning of September, “has been successful in building awareness and the increasing conversion of those aware to more occasions, as we have seen our frequency levels increase along with the addition of new guests to the brand, all of which tied back to the acceleration in our same-store sales.”

Now, delivery will dive into the equation. Wingstop took its service national with DoorDash (it renegotiated terms at the end of Q3). Morrison said the company wanted to be fully rolled out before it leveraged that messaging. “It won’t be the sole message,” he said, “but it certainty will be a component part of the message. And that will be the first time that we have delivered a message to the consumer pointed toward the delivery platform.”

The brand said in Q3 it plans to open between 136–142 net restaurants this year, or about 11 percent systemwide unit growth.

One reliable way to see if a chain’s economics match its growth—are franchisees fueling the expansion or is it coming from the outside? At Wingstop, existing franchisees comprise about 80 percent of the pipeline for new unit development.

It all makes for a transformative time for the chain, which hit 25 years old this year. The celebration was marked by a June announcement of a new $18.3 million corporate headquarters in Dallas. The 78,000-sqaure-foot building will house a global test kitchen, innovation center, and a mock Wingstop restaurant for training.

What is the Inflationary Tipping Point for Fast Food?
The State of Restaurants: Demand, Price, and a Race for Loyalty
Inflation Sends Restaurant Customers on a Hunt for Value