The brand is courting new guests with quality, not discounting, and the results are showing.
Finance | August 2018 | Danny Klein

In recent quarters, Fiesta Restaurant Group’s comeback story has struck a single chord. But you can now add a second chapter to the company’s impressive turnaround. Building on its Pollo Tropical revamp, which came on the heels of a massive brand relaunch, Fiesta just achieved its first quarterly same-store sales gains at Taco Cabana since Q2 2016. And like Pollo Tropical, this followed a July relaunch that accelerated trends to an 8.8 percent gain for the month. The red-hot stretch builds off a strong second quarter for the 170-unit Mexican chain, where same-store sales lifted 3.1 percent, year-over-year. The results also marked four consecutive months of comparable sales growth at Taco Cabana.

READ MORE: The comeback is on for Pollo Tropical and Taco Cabana

In this “strategic renewal plan,” introduced last year, Fiesta isn’t just touching up operational elements to boost performance; it’s reworking the entire positioning of Taco Cabana in the marketplace, and broadly redefining its customer base.

A sample: The comps growth at Taco Cabana in Q2 comprised of a lofty 10.2 percent increase in average check, inclusive of 6.4 percent in pricing and positive sales mix, and a decrease of 7.1 percent in comparable restaurant transactions. Fiesta president and CEO Richard Stockinger said the transaction drop was expected when you consider Taco Cabana’s recent overhaul and what it entailed. Also, the plummet is well worth the long-term result.

“To reiterate what we have said in the past, our strategic direction with Taco Cabana is to evolve our guest base by repositioning the brand and offering higher quality menu and promotional items at reasonable prices, while eliminating deep discounting,” he said. “We believe this will create more profitable and growing transactions over time.”

This shift in direction came about when Taco Cabana surveyed its competitors and identified a spot to fill. It sits somewhere between Taco Bell and its discount-heavy prowess, and the upper-end brands with premium price points.

So how is Taco Cabana going after this customer? It’s a multi-pronged approach that involved taking a hike to pricing and average check out the gate. The product upgrade alone affected almost 90 percent of Taco Cabana’s menu. In particular, it focused on improving proteins with USDA Choice steak, Applewood-smoked brisket, and no antibiotics ever chicken. It also introduced “Loaded Taco” options across multiple proteins. For example, a recent addition was new ground beef tacos, made in-house, and based on Taco Cabana’s original recipe for $3.99.

"There is no doubt that our guest profile has been changing. We're seeing more families and younger people coming to our restaurants.” — Richard Stockinger, CEO and president of Fiesta Restaurant Group. 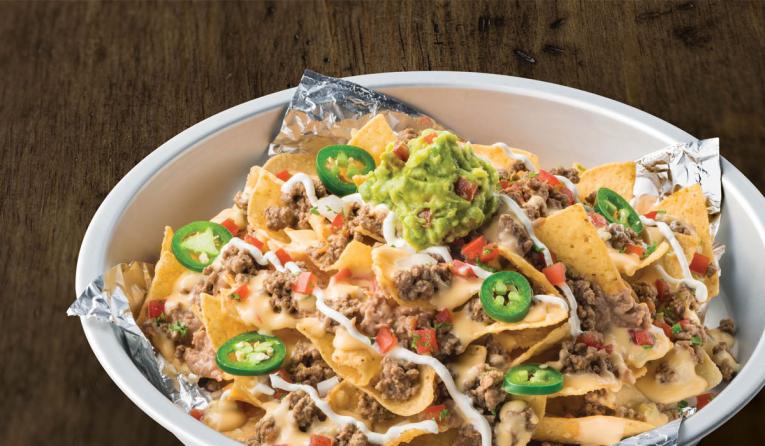 Next was turning Taco Cabana into an experience far removed from the quick, grab-and-go, deal-hunter vision of old. The TC Patio Program is a vibrant example, and has been rolled out to 40 restaurants so far, with more to follow, Stockinger said. The platform amplified Taco Cabana’s patio experience with “patio parties,” live entertainment, karaoke, game nights, and other, evolving activities for guests. And to complement, Taco Cabana introduced new alcoholic beverages, including frozen raspberry vodka lemonade made with Tito's handmade vodka, draft beer, sangria, and seasonal Margaritas made with 100 percent Agave Lunazul Tequila, as well as shareable appetizers.

“They're coming and enjoying [the experience], having either an alcoholic beverage with a sharable item and some of our newer items, and bringing the children at the same time,” Stockinger said. “So now it’s not just, are we looking at the people coming in for take-out or drive thru? We’re now concentrating more and more [of our] efforts on the people who want to enjoy TC within the four walls of TC.”

These current, unfurling changes are showing quick results. Taco Cabana’s comps declined 4.7 percent in Q2 2016. They dipped 1.7 percent to start the first quarter. Comps were down 8.9 percent last July. The brand also expects to open seven new company stores in Texas in 2018, six of which have already opened as of the end of Q2.

Stockinger said the turn isn’t a flash-pan acceleration, and it comes back to the changing guest profile and what that means down the road for Taco Cabana. “It's been a culmination, because it's not something that just happened overnight,” he said. “Even though we show each month, it's been each week has continued to show improvement and getting in more profitable guests. There is no doubt that our guest profile has been changing. We're seeing more families and younger people coming to our restaurants.”

He added that these new customers are being drawn to quality, highlighted by advertising that points to freshness and better ingredients.

On many levels, Taco Cabana is just getting started. Beyond the short stretch of results, more changes are in the works. The brand, like Pollo Tropical, will be testing self-order kiosks in the fall. A pilot MY TC! Loyalty program is soon headed for pilot. The company is also increasing its use of shift leaders to promote leadership development, and turning an eye toward off-premises, a category Taco Cabana really hasn’t leveraged to date.

“We believe that our Dozen Taco Boxes are especially well positioned for delivery, starting with breakfast and continuing throughout the day and evening,” Stockinger said.

He added Fiesta is working closely on partnering with a national company “that will really give us a real punch in the arm,” on delivery.

As a company, Fiesta beat Wall Street expectations with earnings per share of 25 cents, topping the Zacks Consensus Estimate of 22 cents. It posted revenues of $176.83 million, besting last year’s mark of $172.62 million.

Chief operating officer Danny Meisenheimer credited the chain’s citrus-marinated crispy chicken platform, introduced earlier in the year, for some of its positive gains. Crispy chicken purchases currently represent 15–20 percent of all transactions. Pollo Tropical expanded the line in June with three crispy chicken sandwiches, including the Crispy BLT Chicken Sandwich, which Meisenheimer said has already become the brand’s highest selling handheld item. And the message has been a key factor.

“We're using a mix of broadcast, social and local store marketing to support our new product introductions, engage with our guest and drive awareness and frequency,” he said. “For instance, we recently introduced our crispy chicken sandwiches utilizing broadcast media and extended billboards in strategic locations. We promoted our daily deals for specific days of the week such as Marination Mondays, TropiChop Tuesdays, Wildcard Wednesdays and Pollo Time Weekends through digital channels.”

Pollo Tropical is piloting a loyalty program in the third quarter and hired an off-premises leader to spearhead a successful strategy across catering, third-party delivery, and gift-card sales.