The investment suggests the pizza chain still has a ways to go.
Finance | June 2019 | Danny Klein

Papa John's hopes to stem closures with the franchisee aid.

When Papa John’s announced Wednesday an additional $80 million investment in marketing and franchisee assistance, it brought one main question to the surface: What’s the status of the pizza chain’s comeback? Or, as BTIG analyst Peter Saleh wrote in a recent note, “This suggests to us that any meaningful sales turnaround has yet to take hold and franchisees are not yet capable of standing on their own with regard to unit economics.”

CEO Steve Ritchie called the $80 million infusion an “important shared moment for Papa John’s and our committed franchisee base.” It’s not the first time its lent a hand to operators during a lengthy sales slump—Papa John’s same-store sales have run negative for six straight quarters, with all but one period (Q1 at minus 3.9 percent) falling 5 or more percent. Q3 of 2018 was nearly double-digits. The chain provided about $5 million in royalty relief to operators each of the last two quarters.

Saleh and his company hosted a meeting with senior leaders from Papa John’s on Thursday, including CFO Joe Smith, chief operating and growth officer Mike Nettles, and VP of investor relations and strategy Steve Coke.

READ MORE: How much is Papa John’s paying Shaq?

The main topics covered were the marketing and franchisee assistance, franchise-unit economics, marketing plans in light of the investment, and menu strategy.

Saleh wrote that Papa John’s turnaround is going to be a waiting game no matter how you approach it. “We expect a swell in marketing later this year to support new ambassador Shaquille O’Neal and potentially a value platform, but believe it is still too early to call a fundamental turn,” he wrote.

Papa John’s provided some details on the $80 million investment. It’s going to be split roughly evenly between franchisee assistance and brand/marketing initiatives. The marketing spent will be front-loaded to support Shaq’s debut. Saleh said he expects the additional marketing will begin later this summer into the fall with the heaviest media presence in Q4 and the first quarter of fiscal 2020 “when the industry is the most promotional.” Management indicated they were still forming exact plans, he added.

For perspective, national marketing contributions were about $133 million in 2018 (inclusive of an incremental $10 million contribution in Q4 2018) and estimated to be $122 million this year based on BTIG's system sales forecast.

Papa John’s did not provide specific details on the $40 million of assistance to franchisees but did say it would include systemwide and targeted elements to stem closures in more challenging markets. That’s likely the Northeast and West Coast. Management further noted that 25–27 percent of franchise units faced store-level economic pressures that put them at risk of shutterings—a significant jump from 20 percent at the end of 2017, “suggesting this assistance remains badly needed,” Saleh wrote.

In fiscal 2018, Papa John’s closed 186 North America franchises and seven corporate stores, shutting down a total of 193 units while opening 89. It acquired another 62 as well to end the year with 3,337 North America restaurants (2,692 franchised and 645 corporate). There are 1,966 international locations.

Papa John’s expects to fund the investment spend with incremental debt (credit facility drawdowns) as needed, increasing leverage and pressuring earnings, Saleh wrote. This could cut EPS in 2019 a bit. BTIG revised its estimates to $1.11/$1.38 from $1.12/$1.44. That’s about in line with Papa John’s own outlook of adjusted earnings per share of $1–$1.20 with negative comps of 1–5 percent. 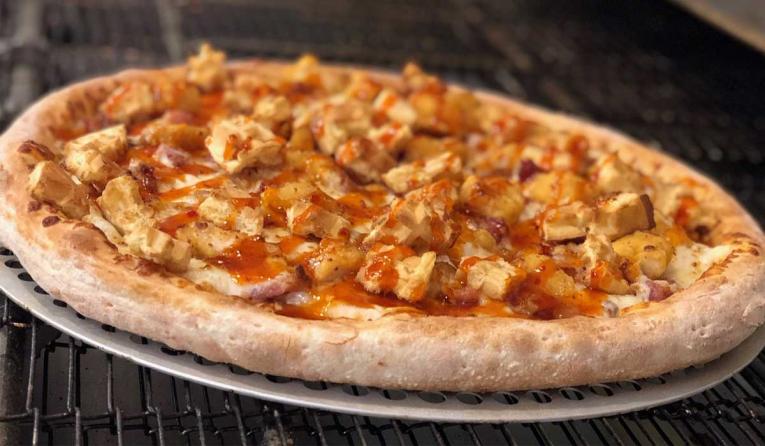 Papa John's speciality pizza launch was one of its biggest menu moves in recent years.

Turning to the value note, Papa John’s dropped some hints about this in recent calls. Saleh wrote that management stressed it was still committed to a barbell approach with a strong value component, which it’s currently piloting. “We have seen Papa John’s testing a $6 value platform in several markets, consisting of a medium one-topping pizza, sandwiches, wings, breadsticks, and desserts,” Saleh wrote.

Management said they would continue to test the structure and potentially other platforms throughout the second half of the year, with a potential national launch in 2020. Saleh said any such launch would likely arrive in later December/January given the industry’s heavier promotional cadence during that time and planned marketing investments.

“We had initially believed the company was moving away from value as the test appeared to have been discontinued in a few markets, but management stressed they were still committed to a value platform in some form and continue to test,” he wrote.

His belief is that Papa John’s is targeting a 10–15 percent sales mix for value, below many of the chain’s quick-service peers, “leaving the majority of the menu to mid- and premium-tier price points such as the specialty pizzas launched earlier this year.”

Those took a dollar-figure hike, too. In late March, Papa John’s introduced six specialty pizzas, including Fiery Buffalo Chicken, Zesty Italian Trio, Philly Cheesesteak, Super Hawaiian, Ultimate Pepperoni, and Meatball Pepperoni for an introductory price of $12. At the time, Ritchie said, it was the most extensive product launch Papa John’s ever tried in terms of a number of pizzas.

It appeared a solid counter to some of the other deals in the marketplace, like Pizza Hut’s $5 Lineup and Domino’s long-running $5.99 Mix and Match Platform.

After a few months and significant media coverage to promote the offering, Saleh said, Papa John’s raised the price of these specialty pies to $16.99–$17.99, representing a hefty 42–50 percent price hike from the promotional offering.

“In our view, this price increase should help the company to achieve its implied negative low-single digit same-store sales guidance in [the second half of the year] given the higher average check implications, assuming no further deterioration in traffic,” Saleh wrote.

And the recent price boost essentially erases the notion of competing on price points with the biggest players. “In our view, these core menu items suggest Papa John’s is attempting to solidify its quality positioning and not trying to go head-to-head on value with Domino’s or Pizza Hut,” Saleh said.

Historically, the strategy has been Papa John’s MO. Lead with the better ingredients, better pizza positioning, not value. But that’s not to say a medium of sorts can’t be struck. Papa John’s has been testing other items, like sandwiches, as well, which Saleh alluded to.

When Papa John’s brought that $12 promotional price to test, it was joined by a menu simplification process that cut lower-performing pizzas across the system. It was also balanced with a $6 medium, one-topping price point that provided an entry point for new customers. A good example of the barbell strategy at work.

Nettles said last quarter, with value-seeking customers, it served as a customer acquisition tool: $6 to bring them in, $12 to trade them up. The pricing structure helped check pressures and provided a value offering the company was comfortable with from a margins standpoint.

Also, it allowed Papa John’s to learn where new innovations fit. Items like sandwiches and some other recent tests, for example. “We are using that data to really inform our product innovation,” he said.

“I will go also one step further,” Nettles added. “We found out with a lot of the value proposition items that even though they may have been out there as a customer acquisition tool, with the right marketing and the right digital targeting of that marketing, there are great [opportunities] for up-sells.”

None of that really changes with the price bump. It just reestablishes a new high-end of the menu to balance the barbell from a more top-line friendly position.

What’s to come next, though? “We view Papa John's shares with a cautious outlook amid current sales challenges and our expectations for a lengthy turnaround as the concept recovers from the founder controversy and negative consumer sentiment that have weighed on the last two years. These challenges have pressured unit economics and store closures, necessitating financial support from the company that will likely continue through 2020 and rendering a weaker outlook for unit and system sales growth,” Saleh wrote.

Simply, it’s going to be an eventful few months.