A veteran franchising exec is leading the nitrogen concept into the future.
Franchising | January 2020 | Danny Klein

In 2020, Chill-N plans on signing 15 agreements and opening three stores.

In the world of nitrogen ice cream shops, Chill-N considers itself an old-timer. But the brand’s history as a growth concept is just beginning. Founded in 2012 by millennial entrepreneur Daniel Golik, who spent months in his garage perfecting the product, Chill-N launched its national franchising program only this summer.

It came roughly four months after Golik promoted franchise veteran David Leonardo to CEO. He arrived at Chill-N from much bigger shops—Arby’s, Burger King, and Wendy’s among them. Chill-N has just eight units, all spread across South Florida, and its growth targets, naturally, don’t approach those brands. Yet Chill-N offered Leonardo a ground-level chance to disrupt a category in ways established sectors, like burgers, never could.

Microbiologist Curt Jones is credited as the first to pour liquid nitrogen on top of ice cream. That was 1987. Sub Zero is a brand that pitched on ABC’s hit show “Shark Tank,” in 2013, although it didn’t walk away with a deal.

But the category remains a blip on the dessert radar in quick service, and Chill-N believes it can alter that by tapping into a local-first, ingredient-forward movement among consumers. The brand’s batches of ice cream are just 6 or 8 ounces and use raw inputs as flavoring. A typical ice cream manufacturer will produce batches by the thousands of gallons and dump multiple 5-gallon pails of “base flavoring,” often an artificially engineered flavoring substance, into each.

Chill-N freezes and flavors every serving, per order, in front of the guest. So, there’s a theatrical element to the process.

Shortly after launching its franchising program, Chill-N inked its first development deal, expanding in the Doral/Sweetwater area. It opened a food hall location at the beginning of 2019 at the Lincoln Eatery in South Beach as well.

By the end of 2020, the company, which remains family run, hopes to have 25 franchised stores in the pipeline. It’s only phase one, however.

Leonardo says Chill-N has the potential to ignite quickly thanks to technology and automation, and a wide-open landscape.

He took some time to chat with QSR about these growth levers, the brand’s differentiators, and why we could see 100 units before long.

What are some traits about Chill-N that lend to scalability?

I believe that we have three main strengths when it comes to scalability.  The first is strong unit economics which is the key to having investors not only invest in your brand but want to open multiple stores. Our EBITDA margin was over 20 percent in our FDD which attracts a great deal of investors and with a payback period of less than three years, investors can look to our brand as a sound long term investment. Secondly, we have an operational plan that is easy to execute. Chill-N has invested in technology to help reduce the labor in our stores and provide consistency in our product. Last but not least, we have a strong management team with a lot of technical, operational and franchising experience. Having the right team guiding the ship is very important when deciding to scale a brand.

Elaborate on some of the chain’s efforts with automation, like the machines dispensing specific amounts of cream and nitrogen into each bowl. How can this evolve?

The innovative technology we use at Chill-N helps employees produce and sell 120 cups of ice cream an hour, which helps the company increase efficiency, quality of the product, and also allows the brand to have less staff at each store, ultimately allowing us to increase our employees’ wages. The hardware and software we use work together to measure each ingredient and time each step of the process, which allows us to increase the efficiency and eliminate potential waste. In fact, our dairy waste is almost completely eliminated. 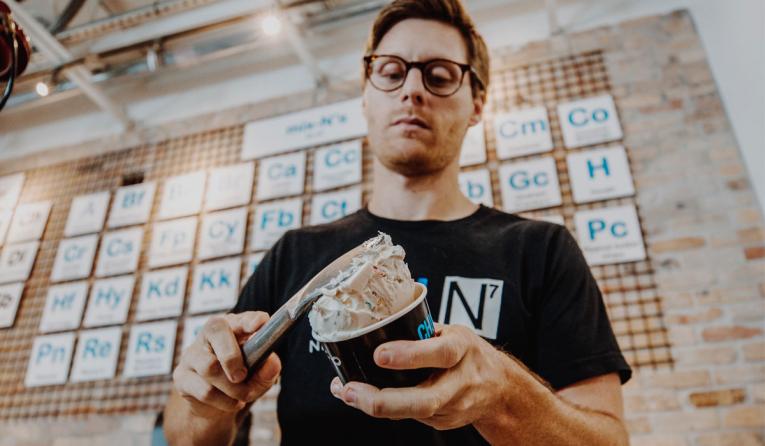 What other tech features of the concept stand out?

There’s no doubt that the technology for making nitrogen ice cream is a show in itself, but there are so many features our technology uses to ensure our consumers are only getting the best out of the best. The automation allows an employee to press the order into a screen and the system automatically dispenses the right amount of Dairy, dispenses the appropriate amount of liquid Nitrogen and then controls the mixer to produce a consistent creamy finish each time. This automation results in extremely low food waste while maximizing proficiency and quality of the ice cream—all done in a matter of seconds.

How do these elements effect labor costs, and how big of a deal will that be as you look to grow?

We actually see automation not so much as a method to reduce labor but in shifting the utilization of labor from execution of the product to the servicing of customers. Our automation allows us to pay our existing employees better wages and allow us to train/retain the best employees that can provide the best customer experience.

What does Chill-N’s expansion look like right now? What are some plans for 2020, the next five years? How big could this concept get?

In 2020, we plan on signing 15 more agreements for franchisees and opening three stores. In five years, we’d like to have close to 100 stores open and be the leader in the liquid nitrogen ice cream space. This concept provides a better-quality ice-cream since the product is being made-to-order right in front of each customer. As such, we expect to replace traditional ice cream shops and become one of the top ice cream franchises in the world. 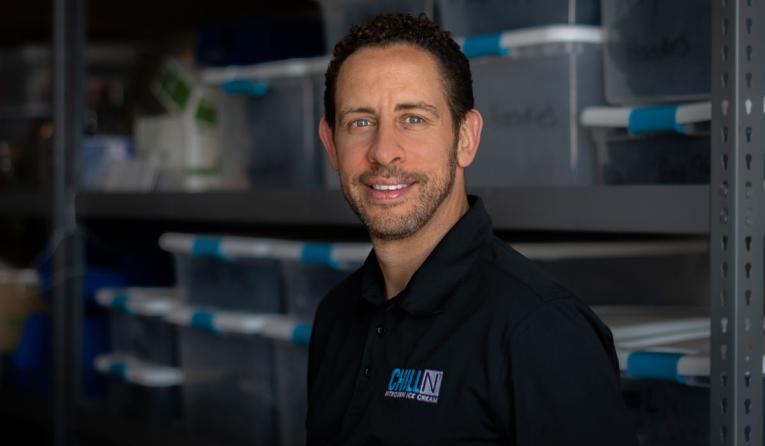 How do you see the chain growing from a market and demographic standpoint? Does it have a sweet spot?

We are a value driven brand and as such we feel we could do well in many different demographics but ideally, we want to be where the concentration of families are with schools in close proximity and middle income households.

What kind of franchisees are you targeting?

Investors who can develop a minimum of 3 stores for us over 3-4 years and recognize the power of being a brand ambassador in a local community.  Multi-Unit franchisees from other concepts have taken an interest in our brand due to the technology aspect, labor efficiencies and high ROI.

Talk about the product itself and how it stands out in a very crowded field. How do you stress those differentiators?

Given the focus on automation and resulting reduction in labor, we are able to focus on sourcing the highest quality ingredients for our brand.  Whether its Macha from Japan, Vanilla from Madagascar, Biscotti from Belgium or our local dairy farmer right here in Florida, we are focused on providing the best quality product at a value to our guests. We also source seasonal fruits from local farms and feel that this farm to cup approach along with our focus on providing a great customer experience is a driving factor in our success and customer satisfaction.