Could Starbucks Open a 'Hidden-Kitchen' Location?

Starbucks is translating some of its China learnings with delivery to the U.S.

From a broad angle, Starbucks will always remain a bit of an outlier in the convenience discussion. No matter where the consumer trends, it’s hard to imagine the java giant turning its 30,000-unit back on the “third place” positioning it built a lifestyle brand on. But as much as the flashy Reserve stores and Siren Retail movement suggest a line in the sand in regards to customer experience, there’s no reason why Starbucks can’t approach the debate from the opposite direction.

Since launching a Miami delivery pilot last fall with UberEats, Starbucks has expanded the platform to 1,600 locations across seven U.S. cities. Speaking at the Piper Jaffray Consumer Marketplace Conference in early June, CFO Patrick Grismer, who joined Starbucks from Hyatt Hotels and YUM! Brands, hinted at a brand-dynamic possibility that could be coming soon.

In the case of New York specifically, he said, on top of the delivery opportunity, Starbucks is “looking at new retail formats that will allow us to best meet the needs of consumers,” in a metro market.

Picture a mobile order and pickup Starbucks with no café operation.

“We think we have strong appeal in terms of how we can improve throughput, better accommodate demand, reduce the lines, and satisfy customers as we go,” Grismer said. “So we see delivery working alongside innovations in retail format in order to best meet the needs of consumers and capitalize on the total demand opportunity.”

The inspiration stems from Starbucks’ experience in China with partner Alibaba. Grismer mentioned a trip to visit Hema, known as Alibaba’s superstore. It’s a pretty complex operation, but basically looks to digitalize the grocery experience. According to Forbes, more than 60 percent of sales are online versus in-store. It doubles as a warehouse and fulfillment center where scooter drivers get orders to consumers in as fast as 30 minutes. Here’s a deeper look inside the model, which as of October 2018, had served more than 10 million customers.

The store Grismer visited had a “hidden kitchen.” It’s the standard strategy for the platform: If a consumer places an order for delivery, it doesn’t really matter where it’s prepared. 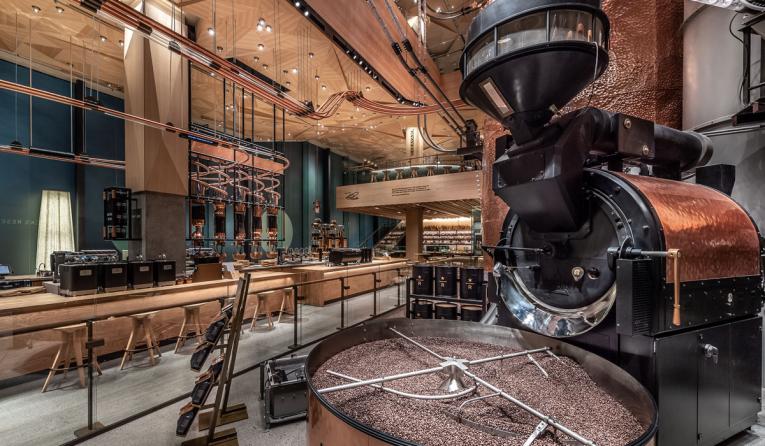 “What the consumer cares about is that it is of high quality, and that it’s delivered in a timely fashion,” Grismer said.

He added Starbucks was “learning from their experience to understand how we might bring a similar model to life in the U.S., particularly in large metro markets like New York.”

So is Starbucks considering a delivery-only location? It sounds like it. Or maybe a spot that serves guests on the go as well as customers looking for the next layer of convenience (delivery). It suggests a location with a kitchen component, pick-up area, and the ability to provide take-out orders in addition to supplying drivers looking to fulfill delivery orders.

This model is gaining momentum throughout quick service and it satisfies a few targets. Consider Chick-fil-A, a brand whose value is defined by its guest experience, trying a similar setup in Nashville, Tennessee, and Louisville, Kentucky. These locations don’t have dining rooms. The Nashville store dedicates roughly 4,200 of its 5,800 square feet to kitchen space—more than double the size of a normal Chick-fil-A.

Chick-fil-A said it was doing this because, per Nashville restaurant franchise operator David Sims, “Customers are relying more on mobile delivery and this new location helps us provide that convenience.”

Guests can walk up to the front counter inside and order, or bring up DoorDash for delivery. They can also order catering to be delivered or picked up. In addition, the restaurant is cash free, which directs customers toward Chick-fil-A’s mobile app. The Louisville store is similar but doesn’t have walk-up ordering (there’s no dining room). It’s solely a catering and delivery vehicle. 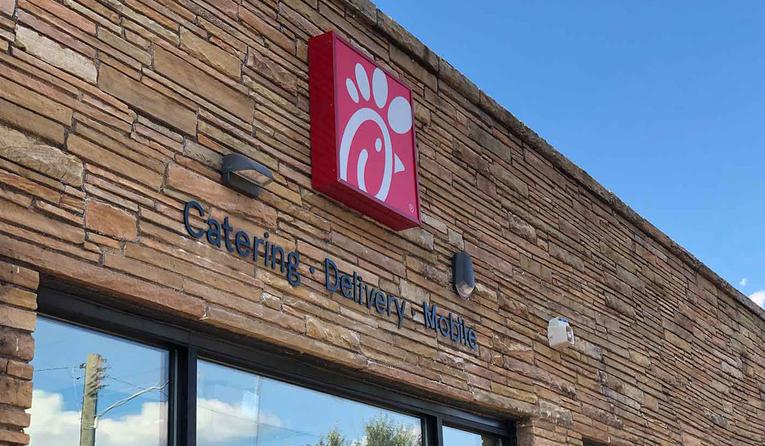 In Chick-fil-A’s example, the hidden kitchen concept isn’t just to satisfy demand, though. It also enables other nearby stores the chance to focus deeper on the in-store element and customer service ticks the brand is famous for. Many chains have found the balancing act of off-premises and dine-in traffic to be troublesome, or at least tangibly complicated.

It’s like a hostess suddenly being asked to serve off-premises orders. Or asking a tipped employee to input delivery tickets from tablet to POS without the incentive of a guest-facing reward. In quick service especially, taking calls during busy shifts has always been a pain point. As is hand typing digital orders from one device to the other.

“Team members can stay focused on making sure every customer has the best possible experience at our restaurants. It’s never been easier for customers who are picking up their catering orders,” Bruce Smith, the operator of the Louisville Chick-fil-A said at the time. This unit was designed to aid locations in Louisville’s East End.

Returning to the Starbucks concept, the hidden-kitchen restaurant could present similar benefits. Would it be able to serve as an off-premises hub of sorts for other New York City locations? Even if it didn’t, it gives Starbucks yet another mold to penetrate more city blocks and markets nationwide. The chain has always been creative with its real estate as far as expansion goes. Starbucks is famous for its ability to open in buildings that put cookie-cutter strategies to shame. A pick-up focused, non-café operation spot would be the nimblest iteration yet

The next question, though, is how would it perform? What happens when you strip the experiential element from Starbucks’ offering? The good thing here is nobody is likely to forget the original model or ditch it if they’re loyal to the offering. If they’re seeking a Starbucks to plug in and stick around, it won’t be hard to find.

“Yes, our heritage and our strength is in specialty retail, and that’s where we have focused most of our resources. That is but one element of the total coffee category." — Patrick Grismer, Starbucks CFO.

For Starbucks, this would be more of an accompaniment than a new concept, so to speak.

The chain is coming off a second quarter where same-store sales climbed 4 percent in the U.S. versus the prior-year period. Much of the credit went to a retooled menu that drove afternoon transactions and pushed up check. Traffic was flat. Starbucks’ p.m. performance improved for the third consecutive quarter and was its best result in the past three years. Globally, Starbucks’ comps lifted 3 percent, including 3 percent in China.

Grismer covered a wide range of topics at the conference. A stressed point was Starbucks’ growth in China and how it differs from the U.S. It’s a hot-button discussion lately as Starbucks faces rising pressure from Luckin Coffee, which Barron’s called “The Starbucks of China.”

The company has traded publicly on the stock market since May 17, with many analysts predicting serious growth in the coming year. Fittingly, Luckin is a company known for its technology-driven retail model. By one estimate, it’s China’s second-largest retail coffee chain by outlets, mostly small booths that fill online orders for pickup.

As of the end of Q2, Starbucks had 3,789 stores in China—17 percent more than it did a year ago. It has, as Grismer noted, grown more rapidly, recently, than Starbucks’ U.S. footprint. There were 17,710 North America restaurants in April (about 15,000 of those are stateside).

Currently, about 80 percent of Starbucks’ growth equation in China is through new unit development while the other 20 percent arrives via same-store sales and improved profitability of its existing base.

That could lead to some sales transfer or cannibalization in the future, Grismer said.

Grismer said Starbucks found success in China with a third-place experience that’s unique to the marketplace, complemented with “this fourth-place experience, which is how we are able to expand our business through digital channels.” Mainly, the Alibaba platform, which first enhanced Starbucks’ digital platform and then helped it launch delivery.

“We know that one of the important need states for consumers generally and this applies across the world is convenience,” Grismer said. “And certainly, Chinese consumers are looking for opportunities to engage with brands that can meet them when they have a particular need.” 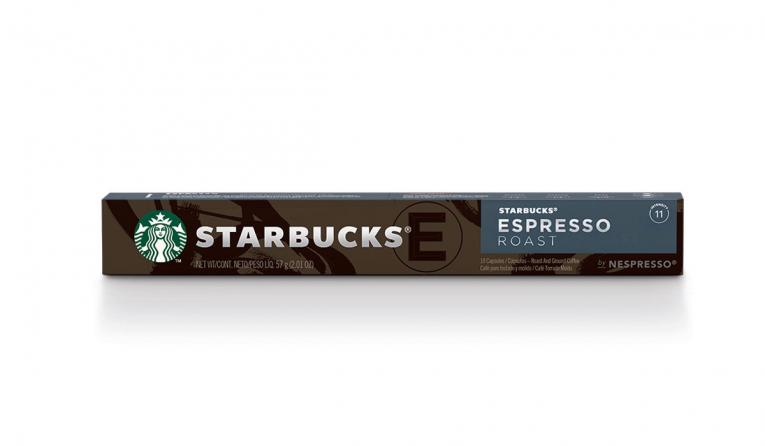 Starbucks by Nespresso launched in May.

Starbucks designed menus for delivery in China in hopes of staying under 20 minutes on orders. “I know a macchiato or a cappuccino, something that has foam, it doesn’t hold up well after 20 minutes,” Grismer said. “And so there were certain products that were removed from the delivery menu, so that we could, with confidence, enter into delivery knowing that our consumers would be having a comparable high-quality product and service experience whether in that fourth place or the third place.”

What’s worth pulling from this is whether or not these learnings will translate to the U.S. experience. It’s hard to imagine that not being the case to some extent.

The thought of streamlined delivery rewards integration is a massive one as well. Starbucks grew its active member base by 500,000 customers in Q2, a 13 percent increase that brought its numbers to 16.8 million. Starbucks Rewards members accounted for 41 percent of sales in the U.S. The chain also touted 15.3 million digitally registered guests who are engaged with the brand but haven’t converted into the rewards program.

Grismer said Starbucks, from a tactical perspective, has worked on reducing points of friction in digital engagement over the past year. It’s reduced the number of steps to place an order from seven to three.

The company also worked on machine learning so that, as consumers are engaging with Starbucks on mobile, they can see relevant recommendations. They can access the history of their orders, which facilitates placing future ones.

Starbucks shook up the CPG space last May when it announced a $7.15 billion move that would bring its packaged coffee into markets around the globe. Nestlé obtained the rights to market, sell, and distribute Starbucks, Seattle’s Best Coffee, Starbucks Reserve, Teavana, Starbucks VIA, and Torrefazione Italia packaged coffee and tea in all global at-home and away-from-home channels. And it paid Starbucks $7.15 billion in closing consideration for it.

Grismer said at the conference that the partnership affords Starbucks the opportunity to spread its coffee web. “Yes, our heritage and our strength is in specialty retail, and that’s where we have focused most of our resources. That is but one element of the total coffee category,” he said. “So we are mindful of the away-from-home experience, single serve, whole bean roast ground and instant, including foodservice.”

The Nestlé deal focuses on that last run of options, allowing Starbucks to penetrate categories within coffee on the shoulders of its massive brand equity. He said it would accelerate Starbucks’ infiltration to more than 100 countries, with preference given to those areas where it already has an established presence with specialty retail.

With that awareness, Starbucks “can capitalize on that as we come behind that with strong offerings and collaboration with Nestlé to ensure that we are building share in categories like CPG and foodservice,” Grismer said.

The importance of Reserve

Grismer admitted, “the economics are more challenging with those stores.”

“We believe that it is something that is very unique to Starbucks, something that only Starbucks can do in the coffee category, something consistent with our statures of brand within coffee globally and something it allows us to therefore amplify the brand,” he said.

Grismer added it not only serves the local customer, but serves as a banner of sorts for Starbucks to introduce customers to its innovation. And it allows the chain to evolve what it brings to core stores. “So the Roasteries serve that purpose elevating and amplifying the brand, while at the same time being a catalyst for innovation in terms of how we drive continued news into our core stores,” he said.