The chain is now franchising, and plans to double in size.

Max Sheets has spent three decades in the restaurant industry.

He was with Smashburger when the footprint transformed from a handful to hundreds. He was at the floor of Ted’s Montana Grill when Ted Turner and George McKerrow pioneered the better-burger segment. His responsibilities took him across the country. And in those travels, Sheets saw things done well, and he saw the opposite.

But soon it came time to channel that knowledge and start his own concept.

Sheets has worked with burgers, seafood, pizza, and steak, but to him, none have shown potential like the explosion of the chicken segment. Roughly 2.5 billion breaded chicken sandwiches were ordered from quick-service chains last year—a 9 percent increase compared to 2019, according to The NPD Group. Roughly 65 percent of the U.S. ordered a chicken sandwich from August to February.

Yet it’s not as if Sheets stumbled upon the acceleration. The category continues to saturate more each day. So the idea was to intentionally create a brand with a niche, and flesh it out completely. His thoughts led him to one of the most popular chicken chains in America.

“I think all of us in the industry set up across the street once in a while and look at the lines that go around that other chicken player from Atlanta, and go, ‘What in the world is going on here?’” Sheets says. “‘Why are they so busy?’”

The first store opened in 2018, and the brand has since grown to three units across Wichita, Kansas. Examples of proprietary sandwiches include Chicken & Waffles to the Max, or crispy tenders on a toasted brioche bun with two sweet waffles, pepper jack cheese, bacon, and spicy sauce; and California Dreamin, which contains smoked chicken on a toasted potato bun, with guacamole, bacon, pepper jack cheese, lettuce, tomato, and jalapeño cream sauce.

The third tier of the menu is crispy tenders, which are used from tenderloins, not cut breast.  Other offerings include chicken and waffles, popcorn chicken, and sides like French fries, onion rings, and smoked white beans. By having a variety, Sheets says the veto vote is essentially eliminated. Chick N Max isn’t just a fried chicken joint or a tenders joint—it’s a “whole bird” establishment. 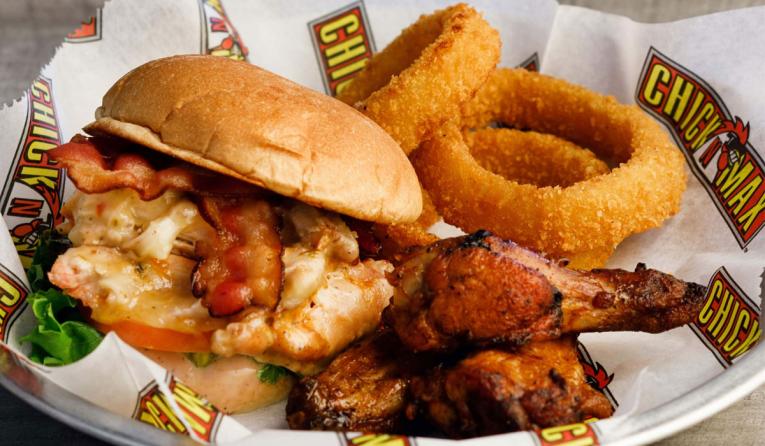 Chick N Max has survived and thrived to the point that it’s ready to be replicated.

“By being able to use the whole bird, that helps us in our purchasing because we're not relying just on going to the vendors and saying all we want are your tenders,” Sheets says. “No, we'll take the whole bird, as well as tenders, as well as wings. And that whole bird we can do great meals with, so it's a wonderful center of the plate option, which then propels our dinner business. And we take that whole bird and pull it. That gives us another leg for our sandwiches. And that pulled smoked chicken is really healthy and really good for you.”

Over the course of three years, Sheets and his team have defined and refined Chick N Max. Amid an unprecedented global pandemic, digital and off-premises channels skyrocketed, and drive-thru more than doubled. Capacity remains at 50 percent despite the local jurisdiction removing restrictions, but Sheets notes stores may cautiously add a seat or two.

The chain has survived and thrived to the point that it’s ready to be replicated. That’s why in late March, the fast casual announced its first franchising program, with plans to target multi-unit operators across Kansas, Missouri, Nebraska, Oklahoma, Texas, and the Southeast. Chick N Max expects to reach six locations by the end of 2022 and open as many as five new units each year after that.

Sheets says Chick N Max has the processes and systems in place to ensure a consistent product wherever the brand goes—franchising is simply the next logical step. The CEO believes his leadership team has at least 150 years of combined experience, meaning the chain has the requisite talent to support and foster franchisee growth.

“It's the wisdoms in the group,” Sheets says. “The combined wisdom was to sit down and say, ‘OK, how do we want to do this?’ It's the concentric circle approach, and here's where we think it makes the most sense to start, because ultimately it's all about supporting the franchisees. It's all about supporting the people that are willing to jump in and go with us. And we're looking for some experienced operators right off the bat.”

With expansion on the horizon, Chick N Max is also working on new prototypes.

“We don't want a lot of people,” he continues. “Just a few. We're going to walk before we run. If we can open three to five stores, that’s great, but it's a long-term commitment and partnership, and we want people that we want to work with, that want to work with us, so that we can all do this together.”

While franchising is Chick N Max’s next phase, Sheets’ philosophy is that company-run stores must expand alongside franchises, so at least one corporate store will open in Wichita this year.” Going forward, Sheets is unsure what the mix of corporate and franchised units will be, but he does know that Chick N Max will never be a company that is based solely on royalty income.

With expansion on the horizon, Chick N Max is also working on prototypes, which Sheets describes as “Chick N Max 2.0.” With each new location, the brand is continuing to evolve the look, feel, and size. The first store is 3,000 square feet, but the second and third are 2,800 and 2,400, respectively. The next prototype is roughly 2,100 square feet. Sheets even mentioned the possibility of looking at double drive-thrus.

Chick N Max’s winning formula is “doing the common things uncommonly well.” Sheets says that in order to be successful, the brand must remain nimble and cutting-edge. He’s seen how dining has transformed in the past three decades. The CEO says that in the 1990s, it was about the product, and in the 2000s, it was more about services. Nowadays, dining is all about the guest experience, which Sheets views as a major strength of the concept.

From the beginning, Sheets invested in Chick N Max to build a legacy brand that will be here for a long time.