Torchy's push into new states will be aided by its recently established managing partner system.

Torchy’s Tacos has come a long way from its beginnings in a single food truck in Austin. The better taco brand now encompasses 71 stores across four states, and, by 2023, that unit count is slated to more than double.

During his presentation at the ICR Conference in Orlando Wednesday, Torchy’s CEO G.J. Hart said the chain plans to reach at least 160 stores in 15 states in the next three years. This rapid expansion will be coupled with some system-wide updates for Torchy’s, including a fresh managing partner model (similar to the one in place at Hart’s former brand, Texas Roadhouse, where also served as CEO) and a kitchen update that emphasizes scratch-made ingredients and faster throughput times.

“Last I checked, tacos have been around a long time—I don’t think they’re going out of style. As long as we continue to bring innovation to that and bring opportunity to our people, we’ll continue to grow,” said Hart, who also previously led California Pizza Kitchen.

The chain—a craft casual touting “Damn Good Tacos” as its slogan—is famous for its creative tacos and irreverent presence (its mascot is a baby devil). It has gained enormous popularity since it was started by Mike Rypka in 2006, achieving current average-unit volumes of $3.8 million per store per year and drawing more than 200,000 followers across Instagram, Facebook, and Twitter.

Right now, Torchy’s resides in Texas, Arkansas, Colorado, and Oklahoma. Louisiana, Tennessee, and a handful of other states are on tap to come into the fold later this year, as well as additional Midwestern, Western, and Southeastern U.S. markets lined up for future years.

For now, the focus is on these less-saturated markets, though, instead of “trying to slug it out in New York, Boston, or California,” Hart said. “The whole goal is to start to get people to understand what Torchy’s is, how good the food is, and that we’re coming at some point in time.”

This year’s push into new states will be aided by Torchy’s recently established managing partner system. The program is built on the idea of local managing partners. Managers are selected in markets of choice, then pay a fee to the brand, sign a contract, and agree to run their Torchy’s restaurant for at least three years.

These general managers earn 7 percent of profits plus base pay, and run stores instead of franchisees—Hart said the Torchy’s team is not looking to franchise anytime soon. As of now, the partnership program has been instituted at about 50 stores. By June 2020, all other existing managers will have joined the program, and any new locations will be aligned with it moving forward. 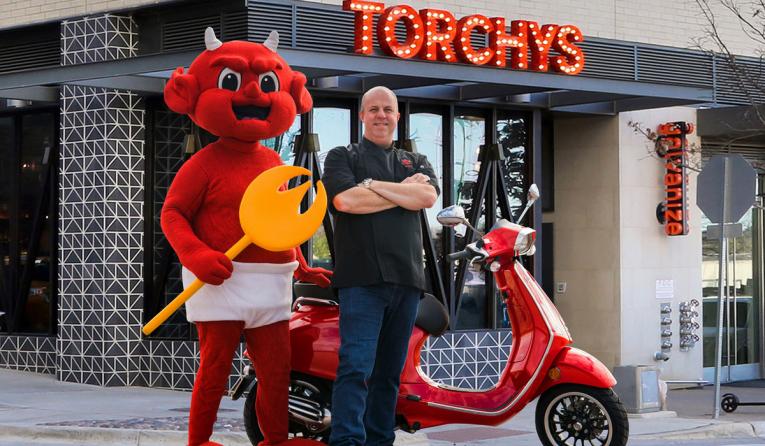 “This is an internal franchising system,” Hart said. “[These partners] speak volumes, in my opinion, to the belief and the passion around what we’re doing.”

Another key piece of the growth puzzle? A new Kitchen 2.0 design. While Torchy’s has long been associated with tacos sporting unique combinations of high-quality ingredients—like the Trailer Park, with fried chicken, green chiles, lettuce, pico de gallo, cheddar jack cheese, and poblano sauce all stuffed into a tortilla—back-of-house updates are increasing quality even further, with the goal of team members making better tacos more quickly as the brand begins rapid growth.

The kitchen design focuses on allowing space for handmaking fresh tortillas in-store (a process that was tested in 2019 and will roll out system-wide in 2020) and cooking all meats just before serving rather than reheating. The updates will also allow average ticket times to drop from 12-15 minutes to 7-9 minutes, reducing throughput for in-store customers as well as carryout and delivery times and making Torchy’s a quick choice that customers can fit into their schedules multiple times a week.

“We have long lines of people at lunch and dinner. And when you have 12­-to 15-minute ticket times, it inhibits frequency … and you’re not going to go as much as you want to as a result of those lines. Just because our guests love us today that won’t happen tomorrow as competitors come to the marketplace,” Hart said.

Reduction is particularly crucial as Torchy’s off-premises orders continue to take off. Right now, off-premises sales hover around 35 percent, and the brand expects this to rise to more than 50 percent in the next five years.

And, of course, as with most concepts looking to grow today, tech is also top-of-mind for Torchy’s moving forward. While Hart did not give any specifics on what types of technology the chain is looking to explore, he did say that the brand had much to do when it comes to technology, and that the ultimate goal was a “total frictionless experience” for guests.

“We are not a technology company—we are not mistaken, we are not confused,” Hart said. “We use technology to enable our future and we believe that, long-term, it’s about individualized, personalized engagement with your guest to drive business.”

Red Robin, Bartaco Vets Hunt for the Next Public Market Star
The Next Evolution of El Pollo Loco Has Arrived
Why The Hummus & Pita Co. is One to Watch

How Subscription Services are Helping Revive Restaurants
Moving Beyond COVID: 3 Ways to Accelerate Innovation
How to Become a Top 10 Global Brand

What Inspires Honeygrow Founder Justin Rosenberg
Back to Normal in 2021? Not So Fast!
What’s in the $900 Billion Stimulus for Restaurants?

What Will Happen in 2021? Here’s What Restaurants Need to Know
McAlister’s Deli Finds the COVID Silver Lining
How FOCUS Brands Doubled Down on Digital During COVID-19

What MrBeast’s Restaurant Success Tells Us About the Future
Sweetgreen the Latest to Add a Drive-Thru Prototype
Restaurant Outlook for 2021: Uneven Recovery, but Better Days Ahead