Digital Becomes the Cornerstone of a New Dunkin'

More than ever, how guests order and where they order is shaping the future.

Web Exclusives | August 5, 2020 | Danny Klein
Dunkin'
Guests can now use the order ahead feature on the Dunkin’ App for pick-up at the drive-thru, in-store for carry-out, or curbside, where available.

The way Dunkin courts consumers is changing. Across the country, morning commutes are largely on hold, and it’s shifted guest routines from early morning to mid-day, particularly the 11 a.m. to 2 p.m. window.

According to mobile location analytics platform Placer.ai, in May and June of 2019, Dunkin’ saw 7.6 percent of its visits flow from 6 to 8 a.m. Fast forward to pandemic times, and the number fell to 5.7 percent. 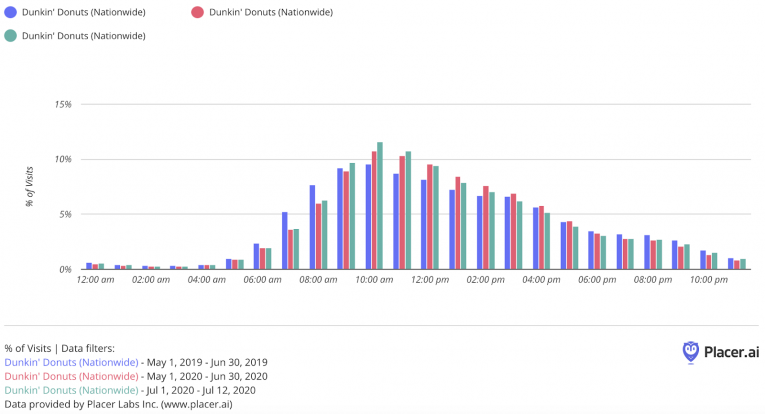 But Dunkin’ has not watched this dynamic unfold passively from the sidelines. It’s responded with innovation designed for mid-day guests, like Matcha Lattes and Dunkin’ Refreshers, which hit the market with a $2 offer. The latter drove high trial, U.S. brand president Scott Murphy said last week, by filling new and existing gaps, including a younger, more female demographic. In fact, Dunkin’ Refreshers proved to be the brand’s most successful new product offering since Cold Brew four years ago. It carried an attachment rate of 70 percent an average check just under $7.

Yet arguably the most buzzed-about Dunkin’ pandemic promotion was something concepted pre-crisis—Free Donut Fridays. Originally introduced in March, Dunkin’ decided to extend the offer through May “to bring guests a smile during a time when they needed it most.” DD Perks members were eligible for a free classic donut with the purchase of any beverage.

Now, the offer is back, joined by a Free Coffee Mondays campaign that runs until August 17. Like the Donut deal in reverse, Perks members get a free coffee with the purchase of a food item.

Stephanie Meltzer-Paul, who was recently promoted to SVP of U.S. digital marketing, says consumers are starting to get their schedules back a bit. So the bookend promotions give people something to look forward to as they reboot their lives.

However, there’s a broader conversation taking shape in the background for Dunkin’. In Q2, the chain’s Perks active enrollment jumped nearly 110 percent, year-over-year. And that’s guests actually engaged with the program—not just sign-ups. Perks transactions as percentage of total sales finished the period a shade over 20 percent, an eye-opening 600 basis-point hike versus last year.

Murphy said value offers, like Free Donut Fridays, “were highly effective” at driving enrollment, reactivation, and engagement. Meltzer-Paul called it “probably one of our most successful Perks promotions of all time.”

The shift in traffic and behavior only heightens the result. Dunkin’ reported a 300 basis-point year-over-year lift in on-the-go orders in Q2—to 7 percent of total transactions. In non drive-thru locations, it was 14 percent. By the end of the quarter, curbside ordering represented 2.4 percent of sales in the roughly 1,400 locations that offered it.

From the rooftop, digital orders, inclusive of Perks, on-the-go, curbside, and delivery (now in 5,700 restaurants), grew to 18 percent of sales from 13 percent a year ago.

This COVID-19-fueled ecosystem is shaping up as follows for Dunkin’: Growth in Perks members, along with a higher percentage of members using mobile order ahead than ever. And you can see the tech-enabled circle round out with accessibility, ordering points, technology, incentives, and NextGen store design. 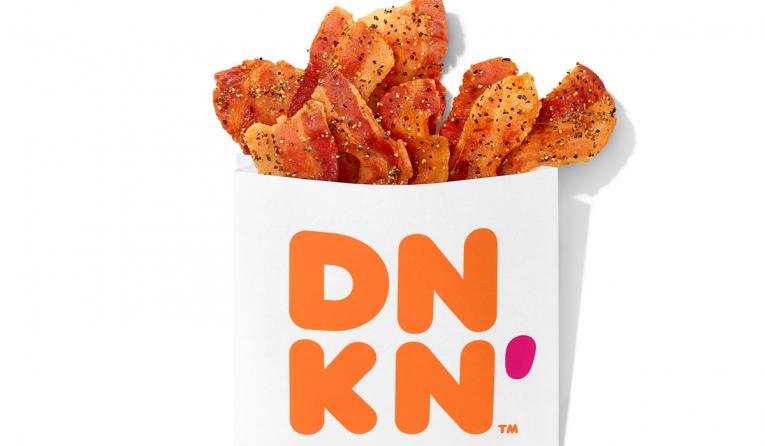 Snackin' items have been key to Dunkin' afternoon strategy.

One under-the-radar point that can’t be understated is Dunkin’s prior investment to bring the intellectual property that runs its app in-house. It’s allowed the company to be nimble, CEO David Hoffmann said during the brand’s Q2 recap.

For instance, Dunkin’ launched curbside capabilities within the app to any franchisee who wanted it, and added a more sophisticated curbside ordering flow for consumers.

All in an effort to become a restaurant chain guests can visit all hours of the day, and do so however they want.

“We knew digital value was having multiple benefits,” Meltzer-Paul says in an interview with QSR. “One is telling consumers that we’re here for you—that we’re still offering rich value during this time. We know value has always been extremely important in the [quick-service] world. But now, more than ever, I think value is key to customers.”

THE COVID-19 ROAD FOR DUNKIN' SO FAR:

Dunkin’ is Giving its Portfolio a ‘Good Scrubbing’ (Q2 Recap)

Meltzer-Paul says Dunkin’s app reports a high repeat rate once customers get in the funnel, proof the brand is doing a lot of things right in a strange, new world. But getting people there is the key. Deals like Donut Fridays bridge the trial gap, which then allows Dunkin’ to showcase vast safety upgrades. Also, a lot of consumers simply need an incentive to adjust their quarantine behavior. In this case, take a break in the mid-morning or afternoon since they don’t have a natural travel schedule anymore.

Last November, about a year after Meltzer-Paul joined, Dunkin’ started to enjoy green shoots from two main digital changes she championed: multi-tender payment for Perks members (where they could now earn rewards no matter how they pay, including cash, credit, debit or the previously used enrolled Dunkin’ card), and guest ordering for Mobile On-The-Go. Customers who weren’t Perks members gained access to mobile ordering through Dunkin’s app.

If you think about the challenges Dunkin’ faces today, these updates ended up as lifeblood changes.

The brand’s 90-day active Perks base, Meltzer-Paul says, was up 18 percent, year-over-year, in Q2. This despite some stores being closed. As of last week, fewer than 70 traditional Dunkin’ locations were shuttered, mostly in New York City and Boston. Additionally, about 300 were off-line in transportation hubs and college campuses. In all, Dunkin’ exited the quarter with 96 percent of its U.S. stores operational.

And, in some ways, these past, restricted weeks have helped drive awareness into many of Dunkin’s digital directives.

“When other restaurants were closed, we were open,” Hoffmann said. “New guests discovered our innovative, everyday value-priced beverages and our low contact service options, including drive-thru, On-the-Go Mobile ordering, curbside or delivery. They now know us as much more than just the donut brand.”

In regards to delivery, Meltzer-Paul says Dunkin’ is working with Grubhub and Uber Eats but currently looking into aggregator expansion. “It’s just about giving choice and flexibility to our customer experience to get Dunkin’ how you want it during this time,” she says.

Meltzer-Paul says training the occasion for breakfast delivery remains a work in progress. In the past, the majority of Dunkin’s delivery took place at homes. Offices were less frequent, but returned much larger orders.

“I think the challenge for us going forward will be to understand what that looks like, how the packaging of all that needs to look like, make sure if you’re sending delivery to an office building or a small group of people that you’re delivering it in a way that still feels like it’s still somewhat contactless in terms of packaging and all of those sort of safety items,” she says. “That will be a focus for us as we think about how we want to expand that side of our business as offices start to come back.”

Before COVID-19, 90 percent of Dunkin’s transactions were some form of takeaway. So this expansion of the company’s digital suite plays into Dunkin’s core equities, Hoffmann said. Simply, it’s unlocking convenience options for a brand that was already fast. “We have been able to give the consumer access to our brand on their terms, safely,” he said.

Meltzer-Paul adds digital guests during the pandemic, particularly Perks members, haven’t proven loyal to any specific pickup option. They pull up to the drive thru, walk in when applicable, and flock to curbside, especially on the weekends when they have larger parties in tow.

It’s put Dunkin’ progress into high gear so guests can make these choices on their own and not let accessibility setbacks send them elsewhere.

“We never would have seen that type of adoption [before] and our franchisees really embraced the option,” she says. “And it definitely is here to stay. Our consumers, our members especially, have given us very good feedback about it. The more options the better.”

Something Meltzer-Paul and Hoffmann both stressed is making sure Dunkin’s app doesn’t stagnate. The goal, Meltzer-Paul says, is to get guests in and out as quickly as possible to get them on their way. Dunkin’ has quick ordering now, directly from the homepage. Consumers can order their recent choice in as little as a few clicks. “And we’re even trying to cut that down further to one-click ordering,” she says. “That is the goal in the near future.”

In late July, Dunkin’ announced some executive changes as “part of its ongoing commitment to digital transformation.”

Meltzer-Paul was promoted, as noted before, and Santhosh Kuma elevated to the role of SVP, global information technology.

Auerbach arrived from Lindblad Expeditions, a ship-based travel company, where he served as chief commercial officer. Before, he worked at Caesars Entertainment and spent nearly 15 years in management consulting.

Goal No. 1, per Hoffmann: “ ... deliver a more frictionless, personalized experience for guests, however they choose us—through the Perks loyalty program, our mobile app, drive-thru, delivery, in-restaurant, and even other channels we haven’t even envisioned yet.”

The developing theme is a clear one at Dunkin’. And it’s coming faster than ever.

“I think not only us, but probably a lot of companies have realized how quickly you can move in a time like this,” Meltzer-Paul says. “In the past, we might have decided to pilot things, or roll things out slowly. During times like this, you just don’t have the benefit of that. You just need to go with your gut.”