The brand has sold the rights to more than 400 stores.

To say 2020 was a crazy year would be an understatement, Dave’s Hot Chicken CEO Bill Phelps says.

The industry vet doesn’t mince words. He thought the worst when the brand's home state of California became one of the first places to shut down on-premises dining last year.

“We thought we were kind of screwed,” Phelps recalls.

And there were reasons to be fearful. Quick-service restaurants saw transactions decline 38 percent in the week ending April 5, according to The NPD Group. Not to mention, Dave’s entered the pandemic as a young brand with three units and a pipeline full of restaurants after launching a franchise initiative in October 2019.

It appeared Dave’s was vulnerable, but reality proved the opposite. Franchise sales did come to a halt. However, that lasted about two weeks. Business surged, and the growing chain was able to “sell more than we ever dreamed of” in terms of franchise territories, Phelps says. To put a number on that dream, Dave’s sold the rights to 285 locations in 2020. That figure is now in the 400 range, which includes more than a dozen states and markets like Boston; Oklahoma City; Indianapolis; Fort Wayne, Indiana; Cleveland; and Columbus, Ohio.

“The brand itself has this cult following, and the appeal of it is just kind of crazy,” Phelps says. “And so smart franchisees follow good unit economics, and they looked at it, talked with other franchisees that opened up their stores, and the business was just really, really solid. So they were very, very excited about the potential for the brand.”

Pandemic or Not, Dave’s Hot Chicken is Growing

The quick growth is primarily through franchising. Of the 14 open restaurants, two company-operated flagship locations are based in the Los Angeles neighborhoods of Fairfax and Northridge. Everything else is franchised, and Phelps says that proportion will remain the same going forward.

In terms of growth, Phelps says conventional wisdom would tell you it’s initially based on demographics and the area, but the CEO says the true beginning point is franchise partner quality. The company wants area developers with experience, the right values, and the ability to build many stores in a short period. Dave’s uses this philosophy because it’s already proven the product works in every market it’s entered, so putting an emphasis on geography isn't as necessary. Plus, the target is Gen Z and young millennials, and those groups are in every market, he says.

Phelps knows Dave’s is expanding quickly, but there’s a plan in place to ensure it’s done responsibly. One part of it is over-investing in the development team so the right infrastructure and support systems are in place for franchisees and their general managers. The other, of course, is the quality of franchisees.

Dave’s offering became more enticing throughout COVID as the chain proved it was pandemic-proof. At the onset of the crisis, the brand saw 9 percent of its business come from third-party deliveries and zero from online orders. In two weeks, the chain's entire off-premises channel ballooned to 60 percent, and eventually peaked at 63 percent. Instead of being "screwed," as Phelps once feared, “business went through the roof,” as more consumers turned to convenience and mobile ordering.

Even as dine-in returns, off-premises has stuck. Consumers will have a lot more choices for eating and drinking now that California reopened its economy, but Phelps doesn’t expect Dave's to be negatively impacted. The company created roots during COVID, and it’s not pulling up now.

“Our business went crazy as we saw that happen with a lot of the drive-thru guys. Business was just great through last summer,” Phelps says. “Now we're going against those big numbers, but our business is really holding in there, and we're really pleased with the business. Even as full-service restaurants and casual dining is opening up, our business remains really strong.” 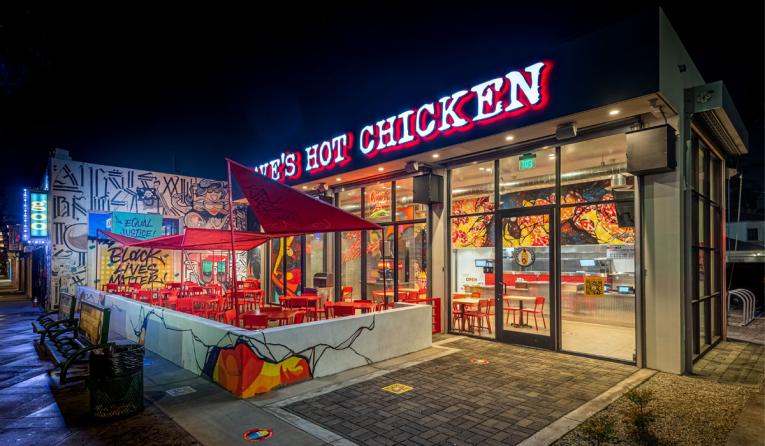 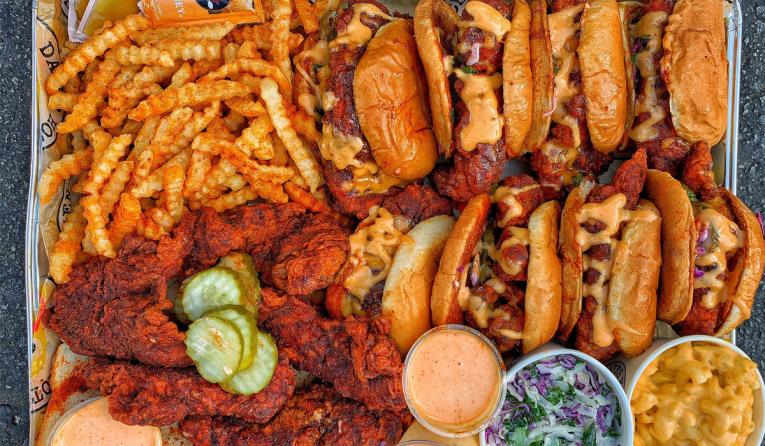 “People have money in their pockets, and we think the business will be great, Dave's Hot Chicken CEO Bill Phelps says. “We are extremely optimistic about where business is going right now."

The brand is firing on all cylinders, but some major headwinds remain. One of the biggest obstacles is the saturating chicken category, which has shot up prices. Using data from market research firm Urner Barry, the Wall Street Journal reported in early May that boneless chicken breast was trading at $2.04 per pound compared to roughly $1 per pound last year. The average price is approximately $1.32 per pound.

To mitigate pressure, brands have tested and rolled out products using more of the bird. For example, Wingstop has tested bone-in thigh wings and emerging brand Wing It On! rolled out crispy Thigh Wings. Because of supply issues, some brands have been forced to pull products. KFC told operators in April to remove chicken tenders and Nashville Hot chicken items from online menus because of supply issues, the Journal reported.

Phelps views it as a short-term spike brought on by rising demand for chicken and shortage of workers at plants and chicken factories.

“Clearly it's an issue for all of the chicken operators,” Phelps says. “The number one growth segment in the food industry is chicken, and it's the protein of choice and it's both in the wings and in the tenders and all kinds of chicken. It's going through the roof, and you just have to accept it.”

To elaborate on Phelps’ second point about the workforce, the CEO says this is the hardest labor market he’s seen in his career. And there’s no reason to think he’s exaggerating. The number of job openings across the U.S. reached a record-high 9.3 million on the final business day of April, according to the Bureau of Labor Statistics. The data is part of the agency’s monthly Job Openings and Labor Turnover Survey. April was the highest amount since the series began in December 2000. The previous record occurred in March, when there were 8.1 million openings. The industry with the largest increase in April was accommodation and food services, which saw its job pool widen by 349,000, or from 989,000 to 1.3 million. Its open rate also rose from 7.7 percent to 9.9 percent.

Phelps points to the $300 weekly boost from the federal government, as many operators have. He applauds the work done by the government, saying it did a “fabulous” job supporting people through the pandemic when the economy shut down in March. He says leaders have kept that progress going with the vaccination rollout. But Phelps says the fact is, the economy doesn’t need those supplemental payments anymore. The boost is scheduled to expire in September, and the CEO believes it needs to come to an end. Half of states agree with his sentiment, and have decided to end the boosted payments as early June 12 and as late as July 19. States are also reinforcing search requirements for unemployed workers.

He believes the removal of those enhancements will bring the workforce back to normalcy within a few months. That will be key as many brands are searching for thousands of workers to meet pent-up demand and roaring sales.

Short-term challenges aside, Phelps says Dave’s is headed for a great summer. Every indication shows the economy and dollars are returning in a big way.

“People have money in their pockets, and we think the business will be great, Phelps says. “We are extremely optimistic about where business is going right now."