Inside the Stunning Comeback of a Fast-Casual Pioneer

Noodles & Company has seen frequency lift from its Zoodles.

You could make the case for Noodles & Company’s zucchini launch as one of the most successful in fast casual history. If you view the company’s pre- and post-rollout performance, the Zoodle spirals a stunning turnaround. In July, the 469-unit brand, founded 1995 in the Cherry Creek neighborhood of Denver—just two years after Chipotle—reported its first positive same-store sales quarter since Q1 of 2015.

That fact alone would sway even the most cynical of critics. But how Noodles & Company did so brought the conversation to another level. It jolted comps 5.4 percent systemwide, year-over-year, including 8 percent at 65 franchised restaurants. Traffic upped 3.1 percent, which also signaled the highest growth for Noodles & Company in six years. Average-unit volumes hiked $27,000 to $1,092,000 compared to the prior-year period. Total revenue increased 4.1 percent to $117.4 million from $112.8 million. Nearly all of the company’s designated market areas reported positive comps. In June, all of them did. 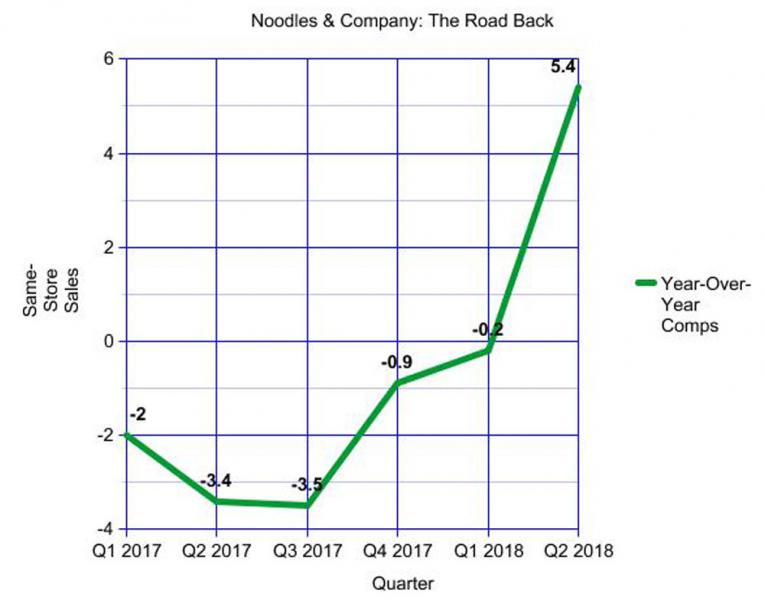 To paint some perspective, Noodles & Company swung a net loss of $37.5 million in fiscal 2017. Heading into the winter of 2017, it reported six consecutive quarters of year-over-year declines at locations open at least a year. The chain then announced it would close 55 restaurants, which it did in Q1 2017—a period where revenue fell 2.4 percent and net loss came in at $26.8 million.

For Dave Boennighausen, who was named the chain’s permanent CEO June 2017, a summer after Kevin Reedy stepped down, the Zoodle is a worthy headline-stealer. But the comeback began long before the product hit menus nationwide in early May.

When Boennighausen first grabbed the interim reins the previous summer, his first task wasn’t to circle product innovation in red ink. Rather, Noodles & Company was staring down turnover north of 200 percent in its restaurants. It was 50 percent at the manager level.

“The first thing that we did was really reengage our team around our core values,” he says. “We had to become much more operations focused in our decision making, and then start going out and making tough decisions we knew would maybe not be the most popular decisions, but would pay out in the long term in terms of helping our operations execute better.”

Noodles & Company significantly streamlined its menu, including removing sandwiches and flatbreads, in an effort to eliminate day-to-day operational fat that wasn’t generating guest value. “We had to get the people side right,” Boennighausen says. “We couldn’t move on until we did that.”

This plan was first outlined in August 2016, news that also came with the departure of CMO Mark Mears as part of a corporate restructuring.

The difficult decision he’s referencing was the shuttering of 55 stores, funded in part by two capital raises. After that, unit count was slowed for the foreseeable future and talk turned to how Noodles & Company could get back on the offensive.

There were three focal points:

To start, Noodles & Company launched a rewards program—NoodlesREWARDS—in July 2017. The chain has taken a holistic approach to the platform, meaning its rewards program heavily influences online ordering. It’s been an effective push, Boennighausen says. Total off-premises sales during Q2 increased 370 basis points over the prior year to 50.4 percent of sales. Also, sales derived from online ordering then subsequently picked up in restaurants, up 620 basis points to 14.3 percent of sales.

Next to note was Noodles & Company’s installation of its initial version of quick pick-up shelving units earlier in the year, which coincided with additional investments in its rewards program and digital marketing strategy.

Lastly, the famed Zoodles. When Noodles & Company launched the product, there was plenty of reason to believe it was going to blast the door off early projections. In turn, the chain introduced a fresh look and feel to its menu boards, welcome wall, and digital ordering platforms. Plateware was updated, as were colors and design elements in its communications. Quite simply: Noodles & Company knew it was about to welcome a new—and lapsed—horde of customers. So it saw an opportunity to showcase a refreshed brand. 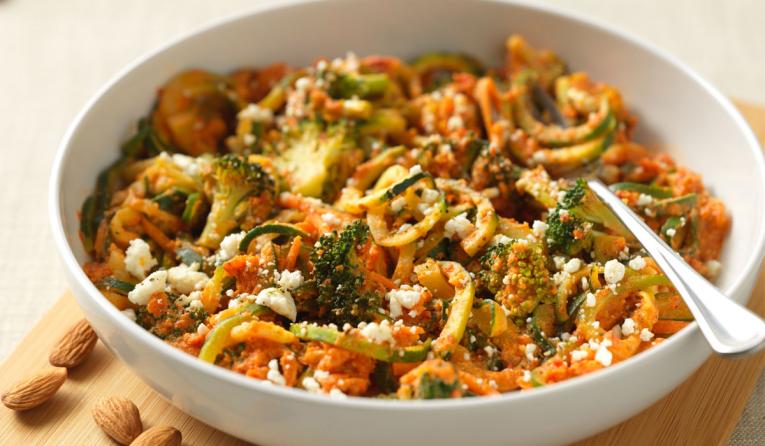 Noodles & Company's Zucchini Romesco has been a hit. Customers have swapped the Zoodles into regular dishes as well.

"In a time where people are so cynical about brands and corporate communications, the fact this one has had so much excitement from our guests has really been powerful." — Dave Boennighausen, Noodles & Company CEO.

Boennighausen says the Zoodle was on the company’s culinary calendar long before launch. But corporate wanted to make sure that “the energy and demand had evolved a little bit from where it was three years ago.”

“And at the same time we had to ensure that our operations were strong enough and our teams were capable enough to execute them, because it was the biggest launch that we’ve had in a long, long time,” Boennighausen says.

Noodles & Company tested Zoodles for nearly nine months before launching nationwide. It started at the operational level and moved to consumer tests. Baltimore, a major market for Noodles & Company, as well as some smaller areas, piloted the product to optimistic results. And key to this performance: Noodles & Company saw traffic lifts driven by frequency, not price.

At its core, the product was designed to do something other launches tried and sputtered—Noodles & Company wanted to introduce a veto eraser for guests who desired a low-carb option. With past attempts, like the BUFF Bowls, which featured a double portion of veggies, topped with protein, and served on a bed of spinach instead of noodles, Boennighausen says the company didn’t ask itself the right questions. Would this product resonate with guests? Is it in our DNA? “What’s beautiful about the zucchini is it’s truly a noodle and it’s allowing us to redefine how a noodle is perceived, and broaden it, which I think is a fabulous attribute, and really just the start of where we can go with showing all of the positive qualities around the noodle itself.”

The response to the Zoodle was overwhelming. Guests ordered the test Zucchini Romesco dish, but they also substituted Zoodles into other popular items at an impressive clip. The company didn’t have to discount the product either to ignite early sales. Boennighausen says early data showed an increase in frequency from loyal guests, as well as the all-important return of diners who abandoned the brand in recent years. It has also pulsed the company’s stature on social media.

“There are so many guests who have Tweeted or posted on Facebook saying, ‘I can now go back to Noodles,’ or ‘my favorite place has something that allows me to come more often.’ In a time where people are so cynical about brands and corporate communications, the fact this one has had so much excitement from our guests has really been powerful,” Boennighausen says.

One of the reasons Noodles & Company practiced patience with the rollout is, as Boennighausen mentioned, the fact Zoodles have matured in the marketplace. Most guests don’t need a crash course in the health benefits of zucchini noodles. All Noodles & Company had to do was make the product more accessible, and better, than what customers could get at home.

That’s one of the most promising factors of the launch, he adds. Noodles & Company cures the Zoodles to ensure they have the right level of moisture and salt content. “And that’s something for the home chef that is just extremely time consuming and difficult to do,” he says. Not to mention, you’d need to own a kitchen tool just for the spiralizing process.

Boennighausen says the product has resonated coast-to-coast, and there’s no real reason to expect a slowdown. Paul Murphy, Noodles & Company’s executive chairman, said last quarter the brand believes the Zoodle can be a long-term platform with incremental potential. In the fall, new, curated dishes are coming. Boennighausen added that other vegetables and even fruit could be added to the line. 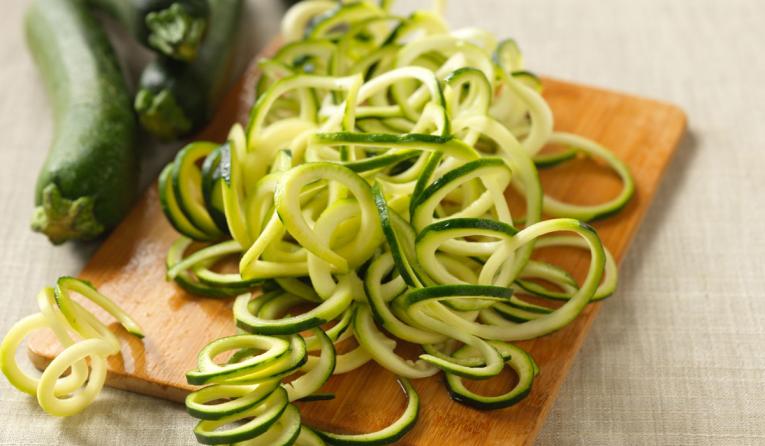 Noodles & Company cures the Zoodles to achieve the right moisture and salt levels.

“While Zoodles have been, very obviously, very effective and we love the results, we think it's just the beginning of the ability to have a brand that has a better for you but also tastes great at the same time. And we think there are kind of infinite possibilities in the R&D against that,” Murphy said.

Boennighausen says Noodles & Company has a chance to innovate around noodles and take the classic dish beyond the old pasta stereotype.

“There’s a lot of opportunity for us to bring, continued healthy alternatives to the menu that also taste great,” he says. “That’s a really powerful aspect—that you don’t have to sacrifice flavor for health, and we can do that in a really special way.”

As for keeping the momentum going, Boennighausen says it’s a multi-pronged approach for the company. Improved elements will continue to be implemented into restaurants. New benefits were rolled out last year to employees. There remains sizable whitespace in delivery, curbside, pick-up windows, and future culinary innovations.

“It’s an incredible brand that kind of lost its way for a little bit,” Boennighausen says. “But while we’ve seen some recent momentum, I also know we’re just in the early phases. There’s still a lot of work to be done, but at the same time there’s a lot of opportunity out there. It’s a pretty exciting time for us.”