McAlister's Focuses on Community in Biggest Evolution Yet

From menu to design to off-premises, this is the first such evolution since the brand opened its doors in 1989.
Web Exclusives | August 14, 2018 | Danny Klein

McAlister's new kids' menu is designed to make the ordering experience a breeze for people of all ages.

Don’t call it a repositioning, says McAlister’s Deli president Joe Guith. Rather, the next stage in the 430-unit chain’s evolution is an enhancement of its heritage and roots. It’s McAlister’s, with a modern Main Street vibe.

“One of the main inspirations for us was that McAlister’s is a place where people connect,” Guith says. “It’s inherent in the brand.”

Guith shared with QSR Tuesday a broad, research-led design evolution. The change is the first of its kind for McAlister’s since it opened its doors in 1989, and will be unveiled to the public in the form of a fresh prototype September in midtown Atlanta. In addition, McAlister’s is launching a systemwide kids and family programming August 15 that hones many of the details spotlighted in the prototype. And, everything, from a new logo to packaging, uniforms, seating packages, menu strategy, and décor, comes back to a single angle: Community.

Guith, who was promoted to the president role in early April from the same post at fellow FOCUS Brands’ chain Cinnabon, said the research, conducted through an agency and by speaking with guests, suggested there’s a notion of “My McAlister’s” in the markets it operates. How could the chain tap into the positioning? “We think there’s an opportunity for us to continue to enhance those connections, with the guests, with our culinary, and with the community,” Guith says.

It starts with the vibe of the restaurant itself. There’s a new, open feel that encourages group gatherings. McAlister’s added a community mural and photo wall. The first can be customized to each neighborhood, while the latter features pictures from the unit’s community sourced by a local photographer.

McAlister’s then added community tables. There’s also a garage door feature on the midtown Atlanta design that harkens back to the brand’s roots as a gas station in Oxford, Mississippi.

The new color palette leverages McAlister’s green and orange, but also introduces gray and blue to present a modern feel. 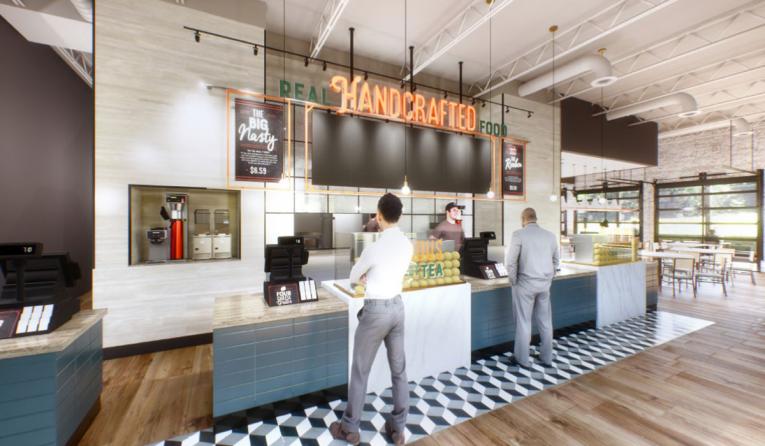 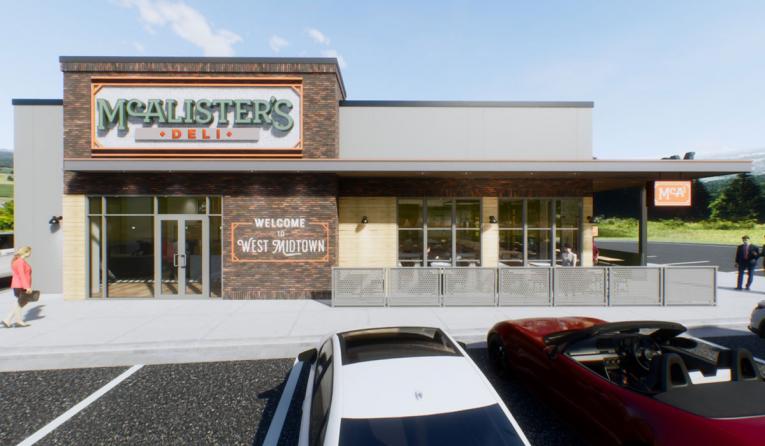 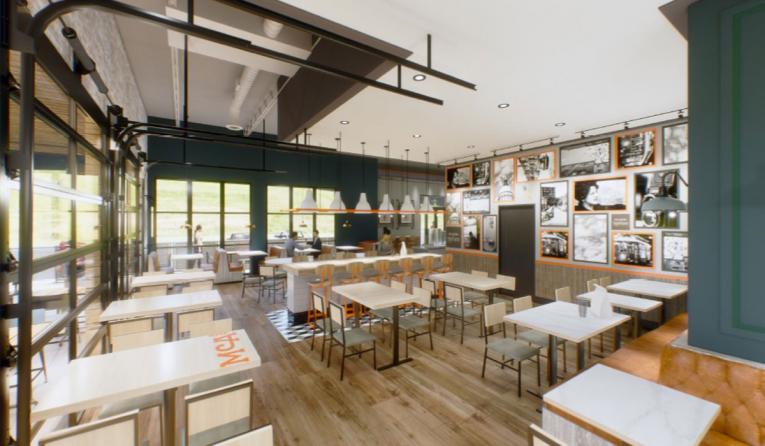 These visual changes are joined by functional ones. Namely, a match for the onrushing off-premises wave Guith says “isn’t going away anytime soon.”

The midtown store features a car pick-up window for guests who order online or via the app. You can’t order at the window like a traditional drive thru. Guests simply pull up and pick up after using their digital device of choice.

“What we’ve looked at from the early days, in terms of what we think the impact is or could be, as off-premises becomes more and more prominent, it would more than pay for the investment,” Guith says. “And it would improve the unit-level economics. The challenge will be of course getting the real estate we can actually execute that in.”

Don’t count out standard drive thrus, either. There are “a handful” of those already in the system, and Guith says McAlister’s is evaluating the option where it works. Given the size and complexity of its menu, however, not to mention the training involved, McAlister’s is “firmly in the camp of having a pick-up window if we can have it,” Guith says. A couple are being added to corporate stores in Mississippi over the course of the next 3–6 months.

As for timing, Guith says McAlister’s hopes to have quite a bit of the changes installed in a material way over the next 12 months. Within 24, customers can expect to see quite a few, both new and remodels, out in the marketplace. McAlister’s paused on remodels once it engaged in the redesign, meaning there is significant backlog. “The flipside is we have a pretty substantial opportunity to deploy this new prototype and design in a meaningful way in the near term,” he says. 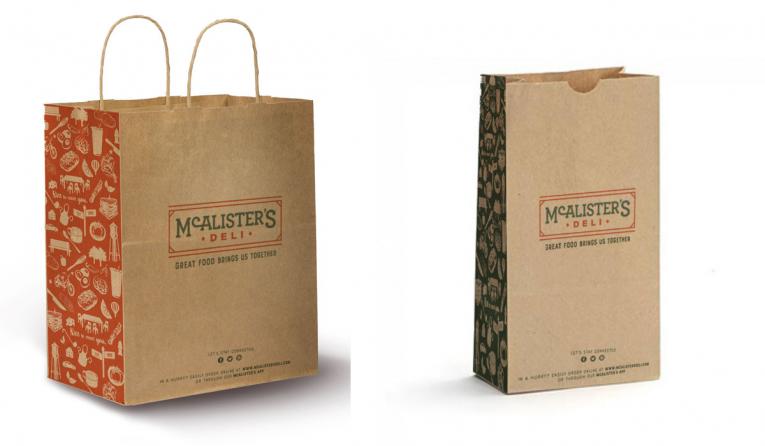 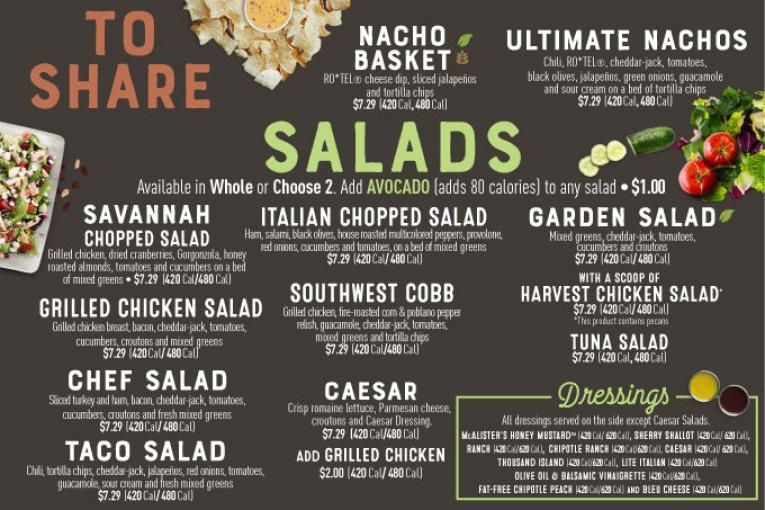 This notion of increased accessibility is a driving force in the entire redesign. Inside, guests will notice an enhanced use of digital on the menu boards as well as throughout the restaurants. McAlister’s is also ramping up its merchandising, particularly as it relates to the brand’s famous tea. “We’re going to bring it forward to the counter,” Guith says. “It’s obviously a huge equity for us. It’s a clear differentiator in the marketplace.”

McAlister’s changed suppliers and chose higher-quality uniforms, complete with new color, logo, and feel. Guith says these products, expected to hit stores shortly, portray a greater sense of company pride for employees and improve the overall experience. New packaging, with a nod to off-premises and sustainability, is coming early next year as well. Alongside, McAlister’s is investing in a broad hospitality-training program that focuses specifically on guest satisfaction. “We know genuine hospitality is a core equity for us, and something that sets us apart from everything from our overall culture and disposition to table service and free refills and table touches that you would not find in other competitors,” he says.

There are to-go pickup stations currently at 90-plus restaurants and online catering live at about 70. McAlister’s is working on revamping its loyalty program as well. McAlister’s Rewards launched in February to take advantage of its new app.

McAlister’s plans to keep pushing its menu into the premium realm, Guith says. It recently launched a Jalapeño Turkey Crunch sandwich that’s been very well received. “We think there’s a lot more for us down that premium line,” Guith says. “So you can expect to start to see that across the menu.”

McAlister’s, back on the off-premises note, could start looking at things like bundled meals built for families in the next 6–12 months, he adds.

The new kids and family programming lands August 15. McAlister’s is unveiling a revamped kids’ menu and in-restaurant experience. This includes a menu that adds elevated options, like a Chicken & Broccoli Bowl with Cheddar jack cheese, and Roll-Ups such as smoked turkey, black forest ham, or all-natural grilled chicken with Cheddar, lettuce, and tomato on a whole-wheat wrap. 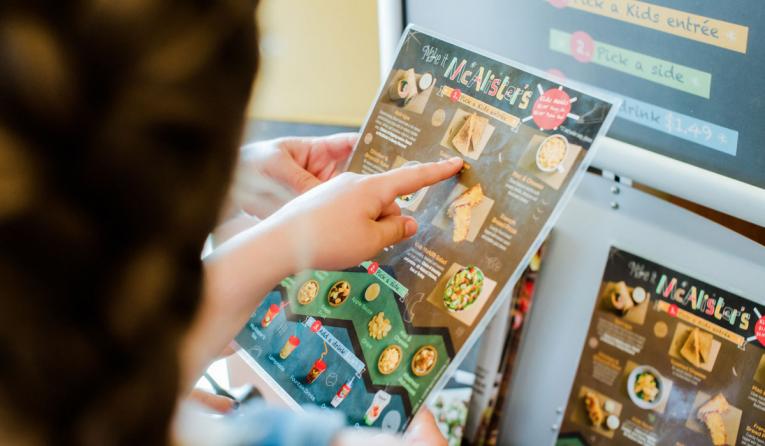 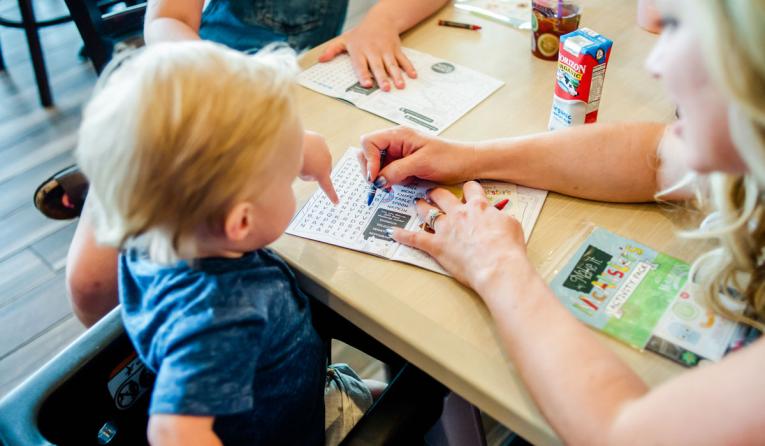 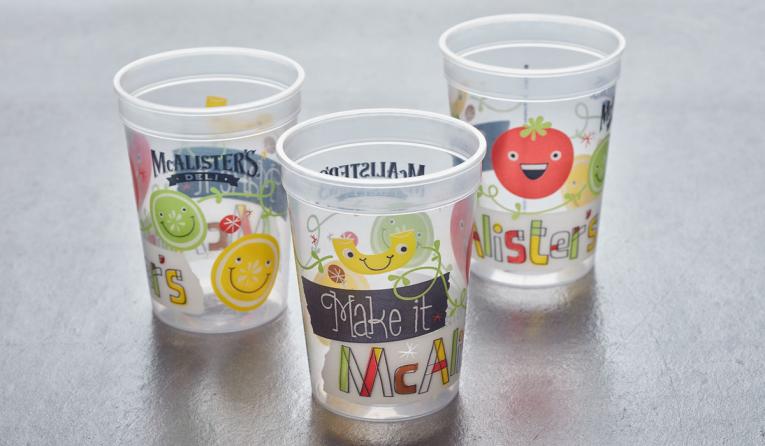 The new menu will also be presented in an easy-to-follow format, including window clings at kids’ eye level to involve them in the decision-making process, as well as large menus that visually lay out the process of picking an entrée, side, and drink.

McAlister’s other touchpoint is “Activity Kits.” These are designed to spark fun conversations via interactive activities. These come with crayons and offer activities. Once more, McAlister’s is looking to harness a community setting where people can relax and connect, Guith says.

“McAlister’s is all about having those community connections, but then extending that to the guest connections through genuine hospitality, as well as culinary connections, which are simple, but elevated, and new versions of the classics people are familiar with,” he says.

1 ADP Blvd
Roseland
NJ
973-404-4360
ADP business solutions, so you can focus on what matters most — your business.
Find restaurant equipment and suppliers
Start Now!

Why Fazoli’s is One of the Pandemic’s Restaurant Winners
McDonald’s, Subway, Exiting Walmart Stores
The Restaurant Revitalization Fund: A Primer

How Raising Cane’s Was Built to Last
Chipotle's Debt-Free Degree Program Gets a Major Upgrade
What Do Frontline Employees Want from Restaurants?

Where Does the Restaurant Industry Go from Here?
6 Ways to Deliver an Innovative Off-Premises Experience
Restaurant Revitalization Fund ‘Amazing Step,’ But Work Remains

Roti to Close One-Third of Footprint
What Inspires Crisp & Green Founder Steele Smiley
Can Sustainability Make a Comeback After COVID-19?

Why 'Host Kitchens' are the Next Big COVID Trend
How Restaurants Can Protect Workers, Guests, and Brands as Hiring Ramps Up
Why You Should Never Stop Learning