The chain wants customers to know the impact of their plate.

Panera Bread is no stranger to issuing industry challenges. Roughly a decade ago, it became the first national brand to display calorie information on menuboards. In April 2017, the 2,200-unit fast casual trailblazed once more, this time by posting nutritional information about added sugars and calories for self-serve beverages. Panera’s founder, Ron Shaich, called out restaurant rivals to do the same.

On Wednesday, the company unveiled another breakthrough initiative. And CEO Niren Chaudhary hopes competitors take heed and join in.

Panera will, effective in the fall, begin labeling climate-friendly “Cool Food Meal” choices on its menu. Through collaboration with the World Resources Institute, meals with a low impact on the climate will showcase a “Cool Food Meal” badge so customers can make conscious choices, if they want.

“I think we’re simplifying a matter that is very complex but very important for all of us,” Chaudhary says. “And we’re simplifying it down to a choice the customer can make at the point of the purchase. That’s the power of this.

“And we really hope that our industry peers will also find there is huge potential in the idea, and will join in identifying and linking the carbon footprint to a plate of food so that collectively we can move the ball forward.”

On a smaller scale, 40-unit Just Salad introduced a seven-item “Climatarian Menu” in mid-September. The brand’s online ordering platform can also calculate greenhouse gas emissions of any build-your-own salad via a partnership with NYU’s Stern School of Business MBA students. Unilever plans to put carbon footprint labels on all its products as well.

There’s a common thread for all three—just as customers might calories, now they can count emissions. The WRI released data alongside Panera’s launch that establishes a maximum recommended daily carbon footprint for a person’s diet (just like the 2,000 calories per day guidelines you see). WRI’s recommended food-related GHG emissions per calorie is 38 percent smaller than the current average.

All of Panera’s climate-impact information for meals is now listed online. Based on WRI’s research, 55 percent of Panera’s entrees are “Cool Food Meal” ready, meaning they're under the Cool Food Meal threshold of 5.38 kg of carbon dioxide equivalent (CO2e) per meal. The Mediterranean Bowl, for instance, has 1.74 kg of CO2e per meal. The Chipotle Chicken Avocado Melt has 5.25. And naturally, Panera will consider this runway when innovating down the line.

For now, though, adding labels is something Chaudhary believes will resonate with customers, and further the brand’s ethos. According to Pew Research, six in 10 Americas say they have seen impacts from climate change in their communities, but many don’t know what they can do to help.

Where Panera recognized opportunity was in an additional, little-known fact as well: about 25 percent of greenhouse gas emissions stem from food production. So Panera wanted to give guests a chance to make a difference by simply browsing the menu. And by laying that roadmap in front of them.

The Cool Food Logo will alert customers when a menu item is climate friendly.

It’s two-pronged for Panera—drive awareness around the issue and how it relates to food, and secondly, enable customers who value climate change and want to help, to link with a brand that streamlined the process.

Initially, the educational journey for Panera will live digitally. Customers will see the message on the app, site, and social media. And Panera will communicate directly with its 40-million-member MyPanera loyalty base, which accounts for north of 50 percent of all transactions.

These channels have only gained relevance during COVID-19. In time, Chaudhary says, Panera will bring the information to hardware and menuboards inside cafes. Most of Panera’s dining rooms are currently open under social distancing and market-to-market CDC and official guidelines.

Presently, Panera’s digital properties are where most of the commerce is, Chaudhary says.

One message Panera wants to make sure is crystal, too, is the notion that while plant-based foods do have a lower impact on the environment than meat and dairy ingredients, there is some nuance to consider. The amount of product on the plate matters. Panera shared a hypothetical: If, each year, every person in the U.S swapped 10 of the brand’s Chicken Avocado Melt sandwiches with chips for 10 quarter-pound burgers with fries, it would reduce emissions by 77 million metric tons of carbon dioxide equivalent. Another way to look at it—the impact would be the equivalent of pulling 16 million passenger vehicles off the road for a year.

“We are putting now all of our data online so that people can have that information of what’s the carbon footprint of all of our entrees, because we do believe in being transparent and honest,” says Sara Burnett, Panera’s VP of food values, sustainability and public affairs. “We want to continue to help people feel good about their choices.”

“By labeling Cool Food Meal menu items, we hope to educate our guests on sustainable options and help them understand the correlation between their meals and the climate,” she adds. “While many consumers are more aware of solutions such as driving less and recycling—the impact of your plate is real and just as important.” 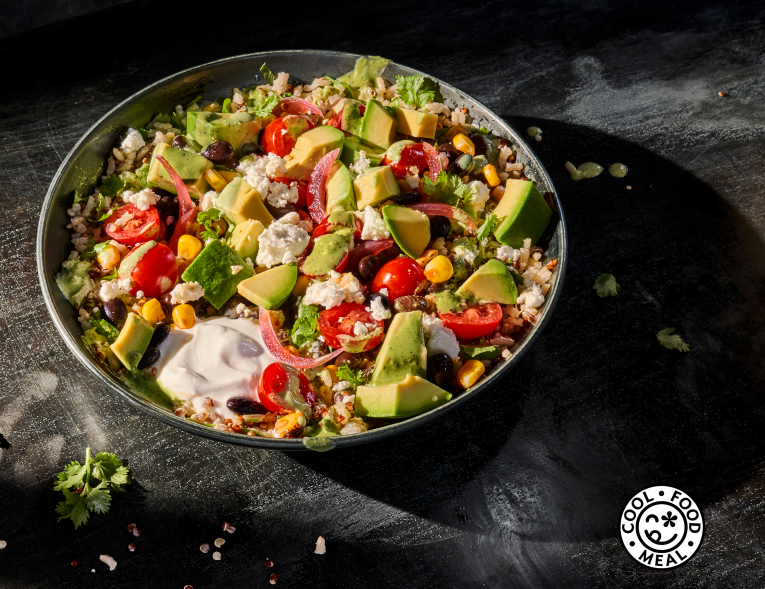 Panera is on pace to reach a previous target of reducing greenhouse gas emissions by 15 percent per square foot by 2022 compared to its 2016 baseline.

The same year Panera offered up its sugar-beverage challenge, the chain completed the process of going completely clean. It reformulated offerings to remove aspartame, high fructose corn syrup, saccharin, and dozens of other ingredients. Panera had to review more than 450 ingredients and reformulate 122 others to get there. It even created a “clean-menu consultant service” to assist other brands in early 2018. The previous September, Panera debuted what it called “the largest clean kids menu of any national restaurant chain,” which offered 250-plus combinations without toys or sugary drinks. This, too, was followed by a challenge to the rest of the sector.

The climate-focused shift gives Panera a powerful platform stacked on past efforts, Chaudhary says. “I think the reason why we’re able to do it is because of the quality of our food and also the relative quantity that we put together, which is very well balanced,” he says. “I think, if anything, it kind of reinforces the importance of getting that right for our customers as we innovate and go forward. … We’re a brand for everyone and we’re proud of the food that we serve. And this is an additional piece of information that we’re providing to our customers so they can make really well-informed choices.”

Panera is on pace to reach a previous target of reducing greenhouse gas emissions by 15 percent per square foot by 2022 compared to its 2016 baseline. This includes everything from packaging to allowing customers to opt out of cutlery for off-premises orders.

“The commitment we have is very sincere,” Chaudhary says. “And I think this is also a reflection of our commitment toward raising the bar of what good eating is in the country. And we’re really hoping that with this becoming more visible, other brands will also want to step up and start measuring the carbon footprint impact of their food.”

It’s also a directive Chaudhary feels aligns with Panera’s customer base. A way to deepen trust, he says. “Customers tell us the No. 1 reason they buy Panera is because Panera offers food they feel good about,” Chaudhary says. “And the reason they feel good about eating Panera food is because it’s clean, it’s responsible, it’s sustainable, and we’re transparent. And this is one of the examples of how we’re strengthening that core equity that we have with the customers.”