The category pioneer has designs for a comeback in 2020.
Web Exclusives | November 11, 2019 | Kenneth Robeson

Pie Five has been shrinking in recent years, but has new leadership in place.

Pie Five is coming back, armed with a shored-up balance sheet, improving cash position, and stronger results from continuing operations.

Solano most recently served as chief marketing and digital officer of Pei Wei, where he recorded the best positive traffic the brand reported in seven years, the company said, fueled by the launch of "Wei Better Orange Chicken," cauliflower rice, and a clean-label initiative dubbed "The Wei Forward."

The company swung a net loss of $800,000 in fiscal 2019 and revenue dropped 18.5 percent to $12.3 million primarily due to a lower company-owned restaurant count. Net income declined $2.7 million (to the loss) compared to growth of $1.9 million in the year-ago period.

Management’s key objectives focus on what Bafundo called the “primary levers of our business: growing same-store sales and adding new restaurants.” The plan also calls for strengthening communication with franchisees and “strategically adding support talent that will provide immediate results.”

Restaurants are located primarily in the Midwest, with a strong presence in Texas. All but one of the Pie Five’s locations are franchised, with several groups owning multiple locations.

The chain recently announced its first unit with KidZania as well, an interactive indoor “city” for children that combines inspiration, fun and learning through realistic role-play.

But the story in recent years has been one of retraction as RAVE looks to reignite the once-growing fast casual. It had about 100 locations two years ago.

In the fourth quarter, Pie Five shuttered four stores, refranchised another, and opened one. Full-year same-store sales and systemwide sales dropped 4.4 percent and 14.6 percent, respectively, compared to 2018. On a two-year stack, Pie Five’s domestic comps are down 17.3 percent.

In just Q4, the fast casual's same-store sales declined 7.3 percent and total sales dropped 22.1 percent. "At Pie Five we are taking restaurant-level approach to growing sales," Bafundo said. "One of the key elements of that plan is to build community relationships and focus on local restaurant marketing. We see this as the most cost-effective and efficient way to build both long-term sales and consumer loyalty for the brand. This is very much like the strategy that we took at Pizza Inn over three years ago now, and as a result, we know that it can work." 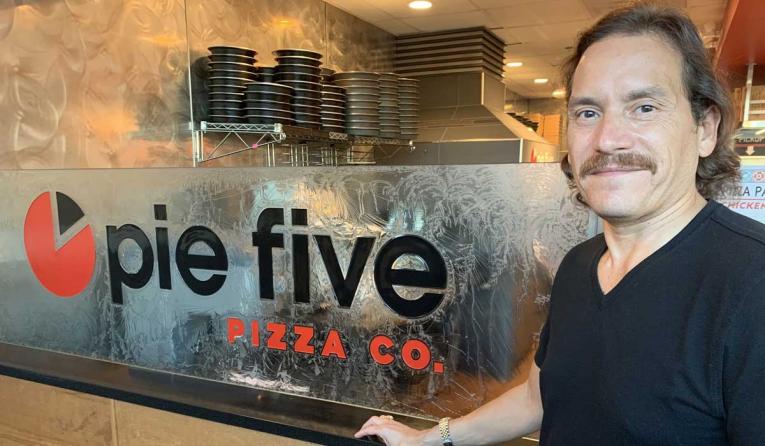 While Pie Five touts speed and consistency of its offering, new CEO Brandon Solano says, “our main advantage is innovation.”

“Pie Five has experienced declining sales and restaurant counts,” Solano says, “but I’m excited about the opportunity for us to transform the brand and restore growth. Pie Five was a pioneer in the fast-casual space, and it’s time to reclaim our leadership role.”

Solano began his restaurant career with Domino's in 2008, where he led the 2010 "New & Inspired" pizza launch as vice president of Innovation. Solano later worked as VP of Development, helping design the "Pizza Theatre" concept and creating the "Fortress Seattle" model market strategy, directing operations. Before Pei Wei, Solano drove positive traffic for the first time in 10 years as CMO at Wendy's.

The goal at Pie Five, Solano believes, is always to inspire profitable traffic and turn in “compelling” unit-level financials. “We’re looking for ways to increase profitability for our franchise partners. As a brand, we’re going to return to consumer relevance and compete very hard.” Total domestic retail sales for fiscal year 2019 were $41.6 million, he says.

Solano suggests Pie Five contended with many of the same obstacles as the rest of the industry. “We battled increased competition, changes in consumers behaviors and increasing wage costs. I think it’s important to acknowledge that we haven’t done a good job keeping a sharp focus on our brand promise. It’s good to acknowledge so that we can move forward and get better.”

Bafundo added RAVE is working with franchisees through a quarterly business review process to help operators analyze opportunities to improve cash flow. "Our hope is that through that program and through more close management that we can slowdown the rate of closures on the Pie Five side," he said. "And I think that should help us hopefully maintain net zero this year as we grow stores. I think we have to be realistic that there are going to be more closings and we're going to work through that to the best of our ability."

In terms of growth, there is, Solano says, “no place domestic or international that’s off limits for Pie Five.” For 2020, Pie Five has locations set to open from Corvallis, Oregon, to Panama City Tocumen International Airport in Panama, Central America.

Bafundo said the brand has received “strong interest in new restaurant development.” The “Goldilocks” prototype lowered Pie Five’s new-store investment as well as ongoing occupancy cost. It’s helped the brand become more agile with expansion as well. “This strategy has begun to show some positive results in improving restaurant fundamentals,” Bafundo said. “Non-traditional development is surpassing projections for Pie Five and as we leverage these opportunities we expect this success to continue.”

While Pie Five touts speed and consistency of its offering, Solano says, “our main advantage is innovation.”

“I think we can all agree that we’re playing in a crowded field,” he adds. “We won’t win playing like the category leaders, so we have to get disruptive and do things differently. When we follow the playbook and execute on our brand promise, we’re in a class by ourselves.”

The chain has rolled-out new menu items, including three flavors of handheld calzones and several limited-time pizzas. It was also an early adopter of cauliflower crust. “We were also the first to the market with large 14-inch shareable pizzas, a year before an NBA star moonlighting as a pizza employee was handing out large pizzas on the street for one of our competitors [LeBron James for Blaze Pizza],” Solano says. “But imitation is the sincerest form of flattery, and we’re going to continue to innovate and be at the forefront of what’s trending.”

Above all, Solano promises newness in the coming year. “Innovation will always be on the table. We’re going to be trailblazers. We plan to create new trends that create relevancy for the brand.” The chain will roll out what he calls a “savage” social media strategy.

“The social realm is a place where we have the opportunity to really connect with our customers in a unique way as we continue to define the brand and establish our voice,” he says. “We’re going to have the best food available in the space, and we’re going to win by driving positive traffic and incremental visits from current guests.”