Project Pollo Pioneers a New Model in the Plant-Based Segment

The chain offers a ‘pay what you can’ system and provides a $15 minimum wage.

Project Pollo is an atypical concept created during atypical times.

It’s unusual nature starts with its name. The restaurant, which debuted in September 2020 in San Antonio, is actually plant-based—or as the tagline says, “chickenless chicken.” Founder Lucas Bradbury did that intentionally. He’s well aware of the potential confusion and the negative feedback he received.

But that’s what Bradbury wants. The mission of Project Pollo is to change consumption and challenge chicken.

“Not sketchy,” he says. “Not like, ‘Oh, by the way, you just ate plants.’ Not like that, because we tell everybody that comes in for the first time, ‘Hey, this is 100 percent made of soy. Would you like to try a sample?’ We educate them fully at the point of sale and out the window as to what they're getting involved with. And I would say that you'll see probably about nine out of 10 times we've created a guest. We've created somebody that will return.”

The name gets customers’ foot in the door. The next step was formulating a concept that provides affordable access to plant-based alternatives—a model sorely needed in the industry, Bradbury believes.

So he created the People Project, a system in which consumers pay what they can for certain menu items. Whether that’s $3, $9, or even zero dollars, Project Pollo will give consumers a meal. The chain asks for a $5.50 donation—which covers the cost for three people—but it’s not required.

The whole point is to do right by people, and that includes employees. Workers are given $15 per hour minimum wage and health insurance.

“I feel like at the end of day as an entrepreneur, as a business person, it's my job to take care of the people around me,” Bradbury says. “And if that means that I go through the rest of my life feeding people at cost, and I'm still alive and I still have a roof over my head and my family still fed and other people are getting taken care of, I've won. It's not a matter of maximizing profits. I'm telling you, it's putting people over profits in choosing the best path for success for what we think is the right thing to do.”

The menu is anchored by chickenless sandwiches, including the Spicy Project—Signature-Breaded Chickn covered in Spicy Garlic Buffalo Sauce, House Ranch, and served with a pickled jalapeño. Other offerings include chickenless strips and wraps, and sides like loaded fries and mac and cheese. Sales from some items go toward charities, as well. For example, proceeds from the Original Project—House-Breaded Chickn topped with House Aioli and dill pickles—go toward saving animals.

Since its first store opened in September, Project Pollo has debuted a new restaurant about every 34 days. The sixth location is scheduled for April 14. Six more units are planned for 2021 in Austin and Dallas, and another 12 are projected to open in 2022 in Houston and Dallas.

So how are costs kept low enough to give away sandwiches and pay a $15 minimum wage?

One of the key factors is Project Pollo’s chicken is proprietary as opposed to a partnership with Impossible Foods or Beyond Meat. Because of that, the cost to make a sandwich is $1.83. 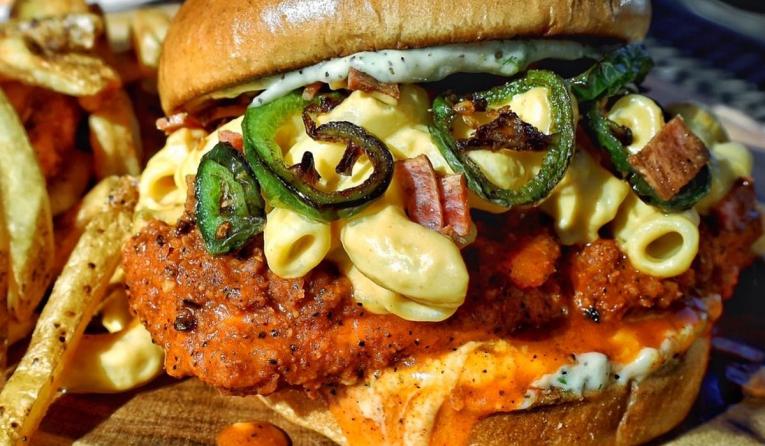 After opening a few months ago, Project Pollo laid out a plan to reach 100 locations by 2024.

Another important factor is the use of second-generation locations, which have become available in bulk due to the effects of the pandemic. Project Pollo has landed in a former Church’s Chicken, Carl’s Jr., and a Jack in the Box that’s next to big names like Wendy’s, Starbucks, McDonald’s, Dunkin’, and Burger King. Bradbury says his cost to entry is roughly $50,000 to $75,000 as opposed to $600,000 to $1 million.

The locations have similar colors and ambiance, but all look different and come in a variety of sizes. One store is 560 square feet and generates almost $3,000 per square foot. The Jack in the Box unit, which is 3,040 square feet and two stories high, has been dual-purposed into an office for district managers and directors. Bradbury claims “we’re going to probably spend less on opening 12 locations than an average McDonald’s will spend on their location, yet generate three to four times the amount of volume.”

Those savings will translate to lowering the price of menu items or giving incremental wage increases to employees, Bradbury says.

“When you have a low cost and low overhead to get into the market, it becomes so much easier to keep everything else because you don't have debt service,” Bradbury says. “You don't have any debt that you're trying to pay back. You don't have any lenders. Nothing of the sort. So on our balance, everything is favorable because we don't have a massive amount of overhead that was involved with the opening process. So that's very important. Because the difference between $75,000 and $1 million is huge.”

After opening a few months ago, the team has laid out a plan to reach 100 locations by 2024. While it’s an aggressive goal, Bradbury says he’s been with a company that’s grown at that pace, so he knows how to build the foundation. He adds he’s a year ahead on leadership positions, which helps with building consistent culture, training, operations, and knowledge. 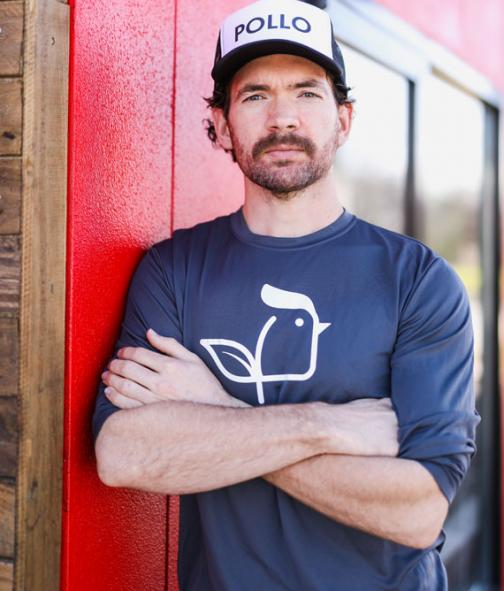 Bradbury knows every new market won’t work, but the key is capturing the right information. Project Pollo is leveraging data to understand how often customers are coming in, where they’re eating, their income brackets, and their ZIP codes. For example, the brand is aware that loyal customers visit almost 2.5 times per month, spending roughly $32 to $35 per visit. New guests are visiting roughly 1.7 times per month, and spending about $20 to $22 on average. When Bradbury gathers the data, he checks where stores may fit. Currently, the figures tell him multiple locations can open near each other without cannibalization.

The process of entering a new market will look like this: Project Pollo will operate a food truck within different areas of the market for about a month. The brand will then analyze engagement and likelihood of return. After poring over data, the concept will find locations, higher a regional director and district manager, fly them down to San Antonio for training, and place them back in the market to foster culture and establish the concept.

Bradbury is realistic that every area won’t be a home run. He estimates out of those 100 locations, the brand may have to liquidate about 3 to 5 percent. But that’s the path for Project Pollo.

“We have a lot of great leaders that are part of our company, and it’s understanding people, understanding culture, and then understanding your data,” Bradbury says. “If you can do all those three, I think that we will be able to see some success.”

To control its core mission and the integrity behind the company, Project Pollo will remain corporately owned no matter how much it expands.

Bradbury says there are many who think Project Pollo is too good to be true. But to him, that’s only the case if you don’t create the model from the outset. The brand has grown from a starting point that prioritizes people and affordability. As the expansion unfolds, it will make ongoing adjustments to ensure longevity.

Does this mean Bradbury will reap massive benefits and income? Absolutely not. That’s fine with him—it was never the goal.

“It is true, and it does challenge the system,” Bradbury said. “Everything we do, we call what we're doing ‘challenging chicken,’ because that's literally what we do. But we are challenging the system that, hey, you can in fact do all these things, hit all these key business drivers, and run a successful company.”