Being the grandson of Wendy's founder Dave Thomas sparked a passion for restaurants and led to the rise of Fresh Stack Burger, an emerging three-unit fast casual that's preparing for a franchise program.

Most of Sean Thomas’ life has been an education on quick-service dining.

His grandfather was Dave Thomas, the founder of Wendy’s. The two spent many travels together, where Sean gained a first-hand perspective of how the fast-food giant came to be, including Dave Thomas’ attention to detail with franchisees and staff. Sean’s first job as a young teenager was working at one of his family’s franchises, and it only took one or two shifts for him to become enamored with the restaurant industry.

“I grew up playing sports my entire life,” Sean Thomas says. “So there's a lot of similar characteristics in restaurants to sports with teamwork and whatnot. So I really enjoyed that aspect as well as the relationship building with guests and the team itself. It was at that point that I fell in love with the industry and knew that I wanted to be in this industry my entire life and carry on my family's legacy.”

The passion pushed Thomas to blossom into a foodservice entrepreneur—just like his grandfather did in 1969. The conception of fast casual Fresh Stack Burger began roughly six years ago when Thomas and his business partner, Fabio Viviani, were in Philadelphia for an event and searching for a quality burger concept. The duo couldn’t find options that were elevated and chef-crafted, so the two began brainstorming a brand that combined Thomas’ quick-service experience with Vivani’s full-service culinary expertise. Mookie Lee, serial entrepreneur and owner of Poke Bowl Co, and Patrick Wartan, a partner and chair of the Food and Beverage Practice Group at Taft Stettinius & Hollister, eventually came onboard as partners.

After canvassing Chicagoland—Thomas’ backyard—for a year and a half, the group found the right piece of real estate in Kildeer, Illinois, at the end of 2019. The first location opened roughly six months later in the wake of the COVID pandemic. The unit began as carryout and delivery only, but was eventually able to serve onsite customers with bar seating and a four-season patio. Earlier in 2022, the second unit opened inside a Whole Foods in Chicago’s Lincoln Park neighborhood, and in the coming weeks, a third restaurant will debut in Oak Brook, Illinois.

The emerging chain offers a selection of 10 burgers and four chicken sandwiches, along with sides, salads, milkshakes, and alcoholic beverages. The company makes a concerted effort to work with suppliers and distributors to obtain locally sourced ingredients. Beef patties are hand-rolled and hand-pressed in-house and chicken is pickle brined, placed in buttermilk for 24 hours, and double fried to order. Restaurants are built with an open kitchen so customers can see the production. 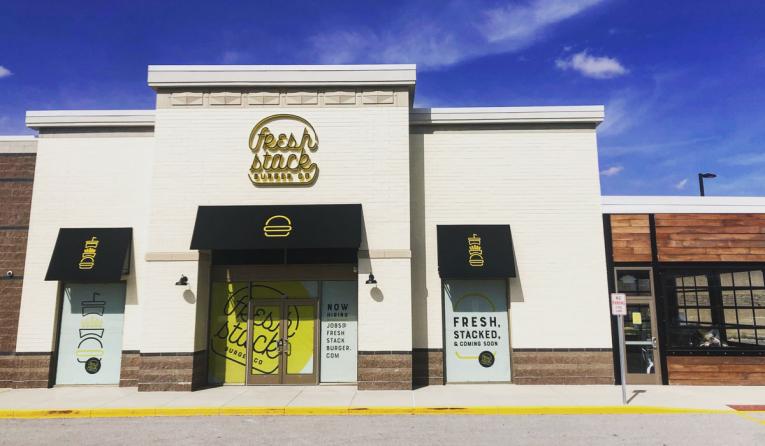 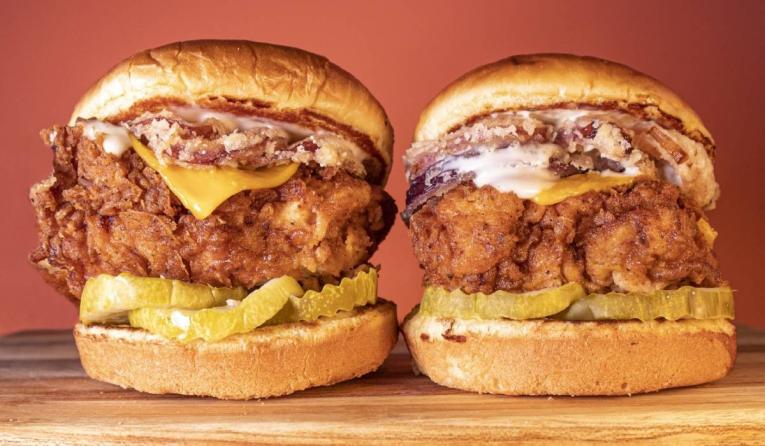 “Our philosophy is really to focus on quality and bringing great food to this concept,” says Sean Thomas, cofounder of Fresh Stack Burger.

The demographics are far-reaching, from families, to kids, high schoolers, and the solo business diner. Thomas says customers are attracted to the credibility of Viviani, who appeared on Bravo's Top Chef, and the nostalgia of his grandfather appearing in Wendy’s commercials.

“Our thought process behind creating that coffeehouse vibe was to inject the room with a lot of natural light and life, and the life being the plant walls that we carry in our locations, just to add that element of naturalness that sometimes gets forgotten in a traditional burger spot that could be often sterile and transactional and not really encouraging,” the cofounder says. “And it's fine. I mean that's what a lot want. You want to get as many butts in and out of seats as possible to turn the tables, which is great. But you know our philosophy is we love for our guests to hang out a little bit longer and when we see them hang out longer, that often results in higher check averages.”

Although Thomas wasn’t ready to reveal future sites, he did note that Fresh Stack plans to build more company-operated units in Illinois, and that it’s aggressively looking to solidify a fourth and fifth location. The chain also expects to franchise, a process the fast casual is ready for. All documentation is in order, and while the menu may seem large and complicated, many of the ingredients are cross-utilized. Thomas owes much of the streamlined operations to the strictness of COVID, which forced Fresh Stack to think on its feet and pivot repeatedly from the very beginning, like building a makeshift drive-thru in the parking lot.

Franchising wasn’t always the goal, but once the fast casual debuted, the chain received several inquiries from customers about potential ownership.

“We noticed a lot of those guests just observing and seeing how the operations worked,” Thomas says. “And when we got multiple dozens and dozens of inquiries to franchise, we're like, ‘well maybe we should get more aggressive on this.’ We had a really in-depth conversation and we were like, ‘OK let's go for it.' We just went through the process of getting our FDD and all that stuff in line and once we really feel the time’s right, we'll turn on the franchising and get that out there to the world.”

The initial restaurant in Kildeer is a 3,000-square-foot second-generation space, which is larger than what Fresh Stack will look for going forward. The sweet spot is between 2,000-2,500 square feet in markets that provide a solid mix of lunch and dinner traffic. The brand caters to a higher-income demographic, so it prefers like-minded co-tenants, such as Whole Foods and Target. The concept is mostly targeting suburban markets in the Greater Chicago area to avoid urban locales that have “A plus concepts everywhere,” Thomas says.

Thomas acknowledges the challenge of building a brand while being part of a family that founded one of the most successful fast-food brands in U.S. history. The key is reminding himself to remain focused on Fresh Stack’s long-term plan, which isn't to be the next Wendy’s. He’s never looked at it as a competition with his grandfather—it would be too stressful and unfulfilling. Thomas knows Fresh Stack isn’t the best fit in every U.S. market, whereas Wendy’s has more flexibility because of its value proposition.

However, the fast casual was founded on values championed by Dave Thomas—creating memorable experiences and turning the ordinary into extraordinary.

“Our philosophy is really to focus on quality and bringing great food to this concept,” Thomas says.