Mooyah gave away free double cheeseburgers all day on October 10.

Let’s face it: People love free. In the quick-service sector, that means giving away food. While customers like to save money, promotions involving free or significantly discounted products require participating chains to implement logistical planning, proper staffing, and the willingness to take a financial chance without always gaining immediate returns. It is definitely a gamble, but varied approaches from different brands prove that free now can mean green later.

On October 10, Mooyah Burgers, Fries & Shakes, which has 70 units nationwide, did its first giveaway promotion. The chain gave away free double cheeseburgers all day, and all customers had to do was to purchase fries or a drink to go with them. It was a tricky endeavor as Mooyah only offered that one burger option all day, and it was serving between 600–1,000 burgers in some locations. But the gamble paid off after it gave away 34,000 double cheeseburgers. The company saw a 27 percent increase in net sales and a 227 percent increase in traffic over the previous Wednesday, over 100 percent new guests, and greatly increased online activity, from app signups to Facebook likes. The event boosted Mooyah’s profile and sales at a time of year before their business tends to lag—specifically November and December.

“The operational component to it was our biggest concern by far,” says Natalie Anderson-Liu, vice president of brand marketing for Mooyah. “It was pretty gutsy to tell people that they can't get their turkey burger or veggie burger or potentially the beef burger that might be their favorite. But in general, people really understood why we were doing it.”

In order to keep the assembly line running smoothly and effectively, and to maintain quality standards, the company focused on only making the one burger choice that day. “It worked really beautifully,” she says. “We increased awareness in a lot of our markets where we're newer and people don't know about Mooyah. So they gave us the shot, we gave them a great experience, and they're coming back which is awesome.”

In order to keep things moving, Mooyah employees prepared to-go bags in advance as it picked that option over regular tray service, which would have been too tricky to tackle under such circumstances. It also had employees on hand to give customers checkbox cards to make their selections (fries and/or drink or shake, and which flavor of shake), so cashier transactions were simple and easy. For the day, one size of fries and one size of drink were offered. This simple approach and preparation paid off.

Mooyah employees prepared to-go bags in advance to prepare for the promotions rush.

Mooyah got some financial leverage from its partners in Certified Angus Beef as well, which is what it serves exclusively. “They really kicked in for us, and they made a huge contribution to this event so that we were able to reimburse franchisees for the food costs to make them whole,” Anderson-Liu says. “While the net sales [for the day] were up, food costs ran much, much higher than that. We were able to make them pull through with that contribution by Certified Angus Beef.”

“We really, really appreciate them stepping up and partnering with us on something that was a pretty pivotal event for our brand,” she adds. “We've never done anything like this before. It was a gamble as I mentioned before, to tell people we're only serving this one burger all day. You could imagine if other brands were to do that. Just navigating those waters was the most critical part of it, and our PR partner helped a huge degree with that and just how we framed this thing up into a positive. Overall, it was a really positive day for us.” Another giveaway is in the works for next year.

Scott Wakeman, senior marketing director for Checkers & Rally’s Restaurants, Inc. says his dual-branded chains like to offer free food through social media. They use a “surprise-and-delight” tactic in that forum.

"A lot of times people share them with friends and family and they'll try other things on the menu,” he says. “It could be seen as giving away all this free food, but then we're also getting back on the additional items that are purchased on that transaction.” — Scott Iversen, vice president of marketing for Toppers Pizza.

The company’s social media team implements software to pick up ratings, keywords, and compliments and complaints to gauge customers’ experience. Thus, if someone responds positively to the brand, or conversely, if they complain about a bad experience, the company responds equally with a free offer. They want to encourage brand loyalty as well as engage in guest recovery efforts following a bad experience.

“If anybody has a bad experience, we immediately try to get them back in the restaurants and we think that the best way to win them back over is through our food,” Wakeman says. “Every brand's got good things and bad things. But the one pillar of the brand is we've got super craveable food.”

Over the last three years, the company offered a $1 fries deal and ran promos like $1 burgers—items that are not free but close to it. While Checkers and Rally’s also offered promos like BOGO, most of the time the brands prefer to pulse free deals via social media.

“I think you get more credit for it there,” Wakeman says. “We put the brand in music videos and we try to get association with big-time influencers.” They seek advocates on social media, even people who are not celebrities. “It's more authentic if you hear it from a friend or if someone's willing to advocate for the brand. That's mainly where we use free to turn people into fans and hope that they give us some love on social. The other place that we really do use it is when we're trying to incentivize people to get into a text program. We're working on an app to employ the same tactics.”

If a customer signs up for their text program, they immediately get an offer for the company’s signature Big Buford double burger. “At first, there were concerns that we're giving away a $4 or $5 burger just to get someone to sign up,” Wakeman says. “But we're able to send you deals. Hopefully you’ll come back more often than you otherwise might. It’s a lifetime value that we feel will probably pay back. That's just an example of giving away a really great value burger totally for free. It works for the consumer, and it works for us.”

Where employees face the biggest challenge is when Checkers or Rally’s open new locations, which means a burger blowout. “Depending on the franchisee, they may charge a buck,” Wakeman explains. “But sometimes we just give away free burgers from 12 to 2 [p.m.] for the first weekend we’re open just to get people to come out and try it. We’re confident that if you try our burgers, you're going to like them.” 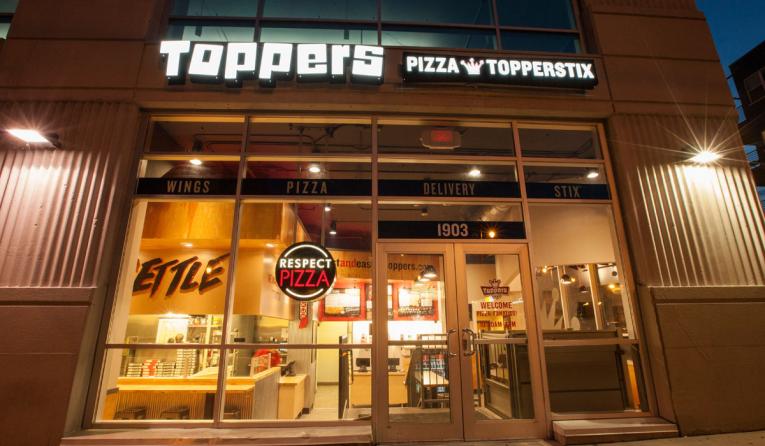 He adds that when such an event happens, they will have lines of cars down the street waiting to come in, but they anticipate that. “It's a tough time for the employees, but we staff up and there's a ton of labor there to handle crowds,” Wakeman says. “When we open a new location, there's a fair amount of curiosity in the market. We usually have a huge opening week. When we do that blow out and give away burgers, it's out of hand, but we think it's a nice way to not only get people to try to brand who aren’t familiar, but also engender some goodwill within the community.”

The primarily Midwestern-based Toppers Pizza offers its own spin on free. Whenever the chain opens a new store, it gives away free food to the first 50 people who order on opening day. That comes in the form of 52 certificates that alternate each week between pizzas and Topperstix, the brand’s signature cheesy breadsticks, which it eagerly promotes on a regular basis.

“Particularly in markets outside of our core where we're trying to teach people what Topperstix are, we'll do a giveaway, a free single order of Topperstix for a day,” says Scott Iversen, vice president of marketing for Toppers Pizza. “It's a way of generating word of mouth. We've done a few of those outside of core markets, and we've also done them on college campuses when students come back for the fall semester. Sometimes we have a Topperstix Day where we're introducing people coming into a college town, that didn't have a Toppers in their hometown, to try this awesome product.”

When it comes to introducing new items like its line of quesadillas and dessert monkey bread, Toppers will create an incentive such as a free quesadilla or free monkey bread with the purchase of any large pizza. “We believe if we can get it in their mouth, the customer is likely to order it again,” Iversen says. “That’s our strategy around new product categories. There's always some element of a free offer with the purchase of something to get people to try it.”

Iversen says the redemption rate of their free food certificates is around the 70 percent range, and these encourage the purchase of other items, which means the check average on free food is like the company’s regular average check. “A lot of times people share them with friends and family and they'll try other things on the menu,” he says. “It could be seen as giving away all this free food, but then we're also getting back on the additional items that are purchased on that transaction.”

Toppers uses promotions to drive word-of-mouth advertising. As Iversen notes, the company does not have the huge budget of larger chains, so it wants to get the public buzzing about its food. “Maybe somebody doesn't want to spend 24 to 48 hours camping out to try to get the free food,” Iversen says. “But we've logged Toppers in their minds as that new pizza place that gave away free food.”

The biggest challenge, Iversen says, is gearing up to handle orders for the day of a free giveaway. While Toppers customers understand that a big promotion will necessitate a slightly longer wait time than normal, it cannot be too much longer. For any company, the promise of free cannot be compromised by subpar service. “We’re trying to maintain that same level of service on those big days like that so we're setting the right expectation for the customer,” Iversen says. “You’ve got to be well prepared for those days because it's a whole lot of order activity all at once. Being prepared to handle it and put your best service foot forward is key.”