Why Fazoli’s is One of the Pandemic’s Restaurant Winners

The chain has set hundreds of records and introduced two virtual brands.

Web Exclusives | April 12, 2021 | Ben Coley
Fazoli's
Fazoli’s ended this past fiscal year up 10 percent in sales and 4 percent in traffic

Since the arrival of COVID-19, Fazoli’s has shattered numerous records. It’s to the point where “unprecedented” doesn’t do it justice any longer.

In Q1, the 215-unit Italian chain surpassed daily sales marks multiple times, which resulted in more than 200 weekly sales records and double-digit gains in sales and traffic for January, February, and March. In the week ending March 24, company locations averaged $34,821 in weekly sales, which bested the previous high mark by more than 8 percent.

Fazoli’s ended its fiscal year up 10 percent in sales and 4 percent in traffic. CEO Carl Howard says the chain broke eclipsed more than 550 records in that timespan. The performance is quite the turnaround from April 2020, when systemwide same-store sales plummeted 23 percent.

“Many, many restaurants have set the record over and over and over, and so we paid out a lot of bonuses for records,” Howard says. “I hope I pay them out again next year.”

The match was lit last spring and summer when Fazoli’s released its 5 under $5 promotion and its Super Family Meal Deal for $19.99, which includes a pizza, buckets of spaghetti and Fettuccine Alfredo, 16 breadsticks, and a gallon of tea or lemonade. And while the number of restaurants nationwide began to contract, Fazoli’s returned to advertising with outdoor billboards and direct mail coupons, reaching new and lapsed customers. From that point, Fazoli’s took off. Customers lined up out to the street, so stores had to place cones outside, Howard recalls.

The menu innovation didn’t stop there, either. In the fall, Fazoli’s introduced virtual concept Wingville after a long period of testing and searching for the right fryer system. Wingville is also part of Fazoli’s in-store menu, and mixes roughly 6 percent, which Howard believes is mostly incremental.

It wasn’t too long until franchisees wanted in.

“All of a sudden, our sales popped again and the franchisees said, ‘What the hell are you guys doing down there?’” Howard says.

Then Fazoli’s largest franchise group brought Wingville to the Louisville market. Other operators followed suit, and Fazoli’s eventually made it a requirement. In a couple of weeks, the 5 under $5 deal will include five boneless wings as one of the available items. That will coincide with the announcement wings are now systemwide. Roughly 80 percent of the system is operating Wingville now, and the other 20 percent will come online in the next couple of weeks. 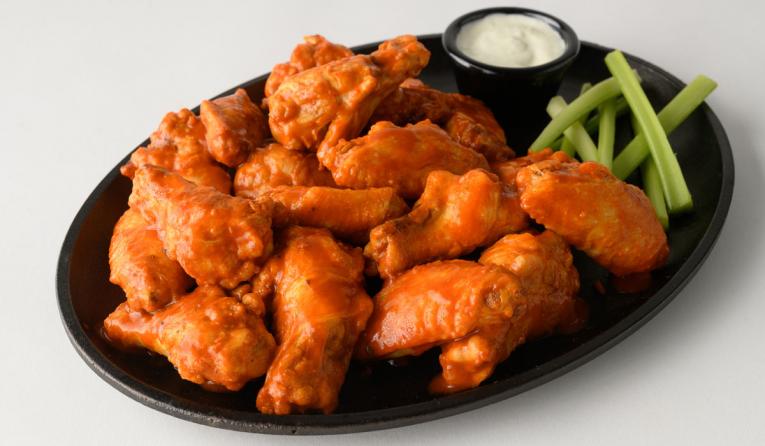 Howard is often asked by franchisees and the board of directors if Wingville is a long-term solution. To answer these queries, the CEO notes Wingville’s sales have already been enough to pay back restaurants for the cost of setting it up. If six months from now the product becomes a dud, he can simply take it off the menu because the money was already earned back.

But that doesn’t appear to be the case. Wingville sales climbed 30 percent since stimulus checks were distributed.

“Right now, there's no indication or nothing in the future that would indicate that we would stop,” Howard says. “For us, at some point in time, it may just come down to our ability to operate our brand at certain volume levels and whether or not we can keep up with demand. It’s something that we talked about this week as a team. I mean, we've got to figure out ways to meet the new demand.”

After adding some American stylings to the menu, Asian fare was next. While at a Fast Casual Industry Council meeting, Wow Bao president Geoff Alexander spoke to Howard about his plans to start a ghost kitchen. Howard, an executive willing to try anything, expressed interest and placed a Wow Bao ghost kitchen inside a Fazoli’s. The brand earned about $2,000 in weekly sales—an amount Howard views as entirely incremental since it’s completely different from Fazoli’s offerings.

Howard says Wow Bao carries some cannibalization, so Fazoli’s can’t place the ghost kitchens too close to each other, but the concept has expanded to about 30 company locations. The chain is also in the process of onboarding 20 franchise groups. Howard says the $2,000 in weekly sales is a three-month return on investment. Some locations have earned as much as $6,000 per week.

Fazoli’s is also in early test stages of another virtual brand called Macaroniville. The concept offers a variety of flavors like Meatball Parmesan Mac and Chicken Bacon Ranch Mac, and other items such as pizza and salad. The chain rolled it out to three locations in Lexington, Kentucky, and will soon bring it to the best delivery locations and operators.

“What affords us the luxury of doing these things again is a shoutout to our operations,” Howard says. “Not only worked really hard on the culinary and technology, but we've worked really hard on service and flow through, and time and meal delivery and quality, and our better operators are the ones we take these virtual brands to first. I got general managers right now asking for Macaroniville, and I'm like, ‘No, we're going to follow the same process that we always do.’ But a lot of times, I don't see managers nearly as aggressive as they are now saying, ‘Give me more, give me more, give me more of them,’ when they're already being pushed on sales. We just got the right culture.”

In addition to menu innovation, Fazoli's has upgraded its mobile app five times since May. In terms of service, Howard says the chain took a cue from Chick-fil-A by bringing employees outside with tablets. As a result, orders are taken five cars back from the drive-thru board. Fazoli’s also hands out breadsticks to waiting cars to mirror the dine-in experience, an amenity suggested by Tim Kimmel, director of operations. Despite an increase in drive-thru volume, the model reduced window times anywhere between 20 seconds and a minute.

“It's really been a combination of branding, value, and what we've done with convenience and operations,” Howard says. “We just really hit on all cylinders, and again, that's a big shoutout to my team because we all worked on this together, and my team did a great job.”

As much as sales picked up, unit development has done the same. During the past fiscal year, the chain signed 20 new franchise agreements to develop 50 stores—the most in the brand’s 33-year history. In the past three-month period alone, Fazoli’s signed a record 11 area development agreements, which adds 36 stores to the pipeline. 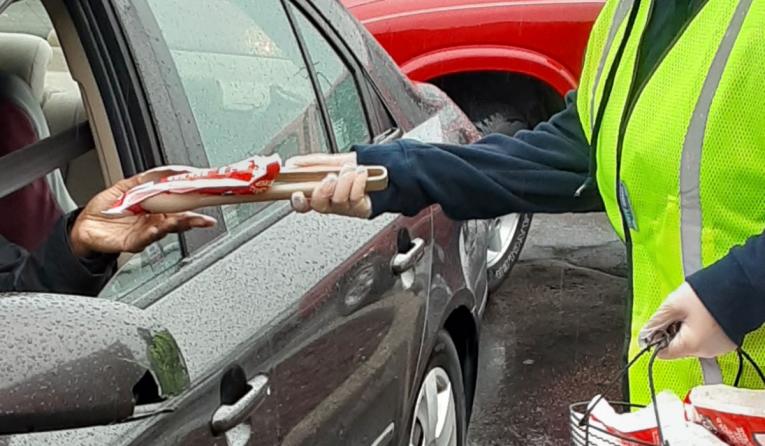 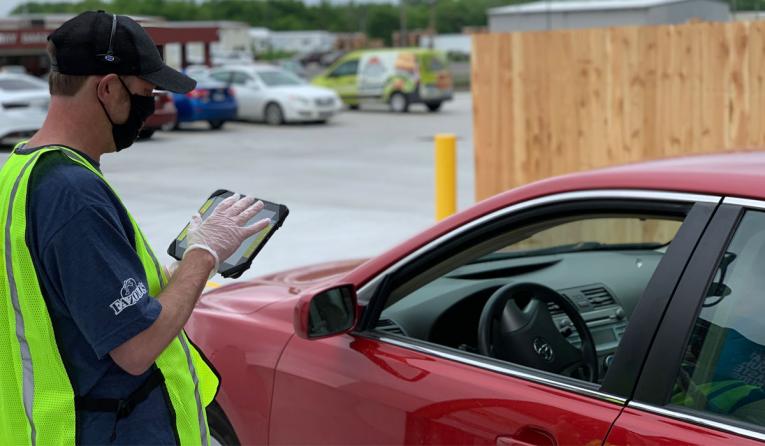 Fazoli's drive-thru experience now includes everything from tablet order-takers to employees handing out a breadstick while guests are in line.

Since last summer, Fazoli’s has utilized a Franchise Incentive Program that encourages operators to go after second-generation locations. If a franchisee chooses this route, they can sign a five-year deal with zero down payment, zero franchisee fees, and zero royalty fees in the first year. The restaurant also relaxed several of its conversation requirements, which allows a franchisee to open a 2,000- to 3,500-square-foot restaurant for fewer than $350,000.

For example, an operator can use different chairs as long as they reupholster the bottom, or use different tables, as long as they use Fazoli’s tabletop. One franchisee has converted Steak ’n Shake locations, and others have moved into former Pizza Hut stores after the bankruptcy of NPC International, a former Pizza Hut franchisee that closed roughly 300 stores. Fazoli’s expects to open 10 to 15 stores in the calendar year, which would be the most in a decade.

Similar to other quick-service chains, Fazoli’s is also shifting to smaller footprints. The company is developing a double drive-thru prototype and units that are 2,200 and 2,500 square feet. Fazoli’s even accommodated an operator in Dallas that needed only 2,100 square feet. In addition, the brand is opening in a former Popeyes unit in Zanesville, Ohio, that only has 64 seats. For comparison, Fazoli’s smallest restaurant right now has 96 seats. Howard notes that dine-in sales are mixing 25 percent in April, compared to 40 percent pre-pandemic.

“I'm saying this because I'm so close to it, but if I wasn't running this company right now, I'd be building Fazoli’s,” Howard says.

Howard calls the current environment, “the new roaring 20s.” He explains summer is usually the best period for restaurants, so not only will there be natural demand, but also pent-up demand from being inside for so long.

That’s not to say all issues will be resolved. Howard says the labor pool is a looming problem, and the government has overstimulated. He points specifically to the $300 weekly unemployment boost, which will last through the beginning of September. This affects not only restaurants, but the supply chain, as well. Howard says distribution companies are hard-pressed to find drivers because of the unfavorable hours. Because of this, suppliers—some that were even under contract—told Fazoli’s they need to raise prices.

“If I was a kid and I didn't really have a career path, and I'm 22, and I'm working at Fazoli’s where I’m trying to figure it out, and I'm making all this money to stay at home, I'm playing PlayStation till four o'clock in the morning,” Howard says. “I'm not going back to work. Are you kidding me?”

While a challenge, Howard is confident Fazoli’s will maintain its momentum, and that’s because of his faith in the leadership team. Whenever he praises their abilities, he assures that it’s not lip service. The CEO knows that none of the records would’ve been accomplished without having bright and experienced coworkers pushing each other.

Much of the success happened because Fazoli’s reacted before everyone else, Howard says. He expects the same to continue into 2021.

“We were on calls every day at five o'clock for three straight weeks,” he says. “And then we moved it to Monday and Fridays just make sure that we were on top of it. My team dug in and worked really, really hard. And they're going to get rewarded with a big bonus this year, which I'm thrilled to pay. It was a team effort.”