Smaller, more agile restaurants are on deck for 2020 and beyond.
Fast Casual | November 2019 | Danny Klein

Shake Shack will face challenges as it transitions to just one third-party delivery platform.

As Shake Shack continues its march across the country—one of the fastest growth paths in all of quick service—its redefining how restaurants look and operate. And that includes future builds as well as legacy units.

Similar revamps are slated for Upper West Side and Grand Central Station restaurants in 2020, among others. But while the changes support Shake Shack’s overarching goal of ops simplification and frictionless guest experience, there will be a near-term blow to weather.

Some of the remodels will include temporary closures, Garutti said, which will be incorporated into the company’s total revenue outlook for 2020—something Shake Shack plans to share at year’s end.

The news, along with third-quarter same-store sales that missed analyst expectations and revised guidance, led to Shake Shack’s shares dropping north of 20 percent November 5 on the stock market, marking its biggest one-day percentage decline since the burger brand went public in 2015. Shake Shack was down roughly 19 percent by 2 p.m. to $68.26.

Yet there is one development that sailed earlier targets. Shake Shack said it expects to open 38–40 domestic corporate stores this year (in line with past goals), but is raising its licensed net openings to 24–28 from 18–20. That latter jump pushed Shake Shack’s expected revenue to $592–$597 million from $585–$590 million.

The company has brought 32 U.S. corporate units to market this year, which is a compelling figure when you consider there are 151 total. This time a year ago, Shake Shack had 188 restaurants systemwide (108 domestic company, 11 licensed, and 70 international licensed). Now, there are 254 (broken down 151, 17, and 86, respectively). That’s a 35 percent increase.

It’s not slowing, either. Shake Shack’s 2020 estimates call for 40–42 new domestic corporate stores and 20–25 licensed restaurants, with the openings heavily back-weighted. The goal remains to hit 450 restaurants in time.

The interesting note, though, is what this looks like for Shake Shack, and how quickly that’s evolving.

Firstly, the brand is ready to slow new-market development and start nurturing brand awareness in current areas. Only 10 percent of 2020 stores will break into fresh cities. Garutti said that will help Shake Shack leverage its existing infrastructure, including operations, training, marketing, and supply chain network. 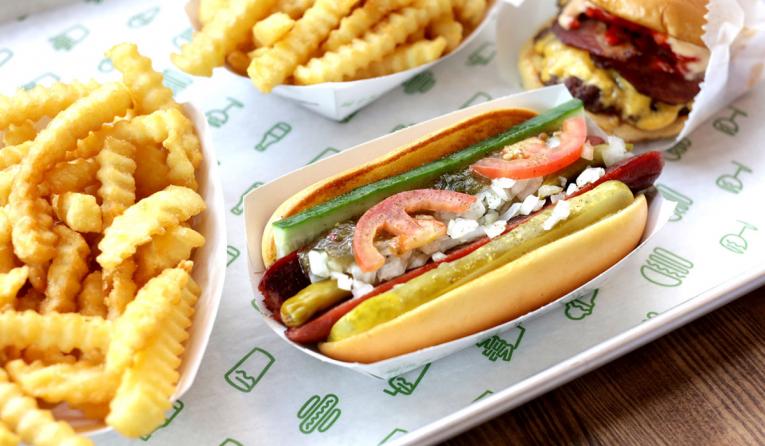 Speaking to Garutti’s earlier point with remodels, the conversation extends well beyond zip codes. The brand expanded through a mix formats in 2019, and also added a number of premium food court and airport venues. The most recent was in Las Vegas.

Moving forward, Shake Shack will look to urban, freestanding pads, and shopping lifestyle centers. To start. And notably, the brand plans to pilot additional formats, Garutti said, including “a few” urban units with smaller footprints that integrate digital ordering and an improved pickup experience. They key retraction, space wise, will show up in the dining room.

Shake Shack has a Manhattan opening on deck for late 2019 that has “very few seats inside,” Garutti said, “and [is] built for the digital and delivery experience.”

The fast casual famously tried a cashless Astor Place store to mixed results, but that store was still close to 4,500 square feet. Garutti said the new units will range between 2,000–2,500.

And the design, Garutti added, will “do its best to separate in a … better guest experience fashion.” More focused on the digital pick-up journey than the ordering one.

“That will be an interesting test for us,” he said. “And we've got a few more of those, not just urban, but some throughout the country that we are going to test that are different formats that will teach us some things.”

“Those are orders that are originating outside Shake Shacks,” he said.

Shake Shack is far from a Big Apple brand these days. Today, 85 percent of all locations are located outside New York City. For the trailing year ending in Q3, the company added $131 million in total sales with growth of just under 3 percent in same-store gains.

Unlike some brands, comps are a relatively small part of Shake Shack’s overall performance given how fast it’s growing. Less than 7 percent of the brand’s same-store sales expansion in the past year has come from base restaurants. Currently, Shake Shack’s comp base mixes just 54 percent of its total footprint, decreasing to 52 percent by year’s end.

Essentially, it’s difficult to judge Shake Shack’s progress by marrying the top line. The chain’s trailing 12-month average-unit volume sits at $4.2 million, with average weekly sales of $80,000. That should decline as the total store count grows, then level off. CFO and president Tara Comonte said AUVs will run about $4.1 million for the full calendar. 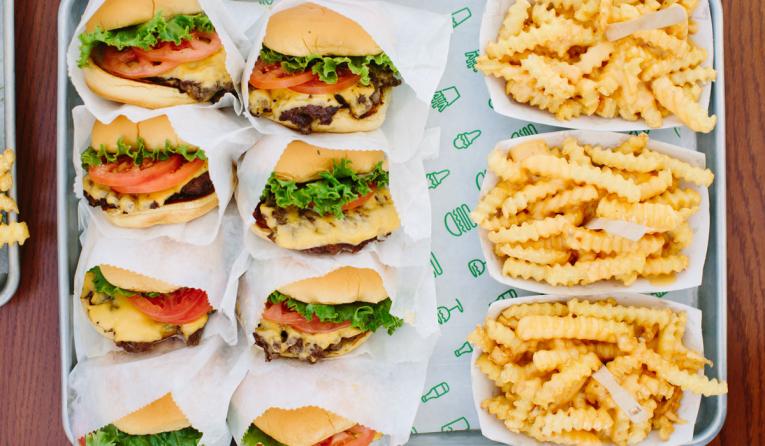 Amid a tightening and historically crowded labor pool, Garutti said, “there has never been a greater need to invest in recruitment, retention, and leadership development.”

One differentiator Shake Shack continues to test is a four-day workweek for managers. Garutti said the brand plans to expand the program. “It’s something that we’ve dreamed of doing for so long,” he said. “And it’s something that we are still intact on.”

Currently, about a third of Shake Shack’s restaurants are trying the option.

“So, the recruiting possibilities are huge.”

There remain kinks to work out. For instance, making sure employees can access all the training they need minus a day. Also, Shake Shack needs to ensure it can cover restaurants and still protect margins in a way that makes sense, Garutti said. “We are cautious about it. We’re excited about it. And it’s something we are continuing to invest in. It is not something that’s locked forever, but we’re looking to learn.”

Something to keep an eye on, too, is Chicago and Philadelphia’s impending legislation that mirrors the Fair Workweek laws you see in New York City. “These regulations add a significant amount of inefficiency to our labor model, removing the ability for more dynamic scheduling, and adding payroll costs and administrative burden to the of our managers,” Comonte said.

The risk of a single-vendor delivery strategy

Shake Shack struck an integrated delivery deal with Grubhub in August that marked a shift in perspective, albeit an unavoidable one. It was just the previous December Shake Shack said its products were “not intended to be eaten half an hour after they were cooked.” But convenience is a runaway train in quick service. It’s become more about finding ways to win the delivery arena than resisting it.

Shake Shack said its exclusive deal was critical because it included guest data insights and integrated into the company’s point of sale. Seamless connection that enables Shake Shack to “throttle that in real time” when it comes to serving busy volumes.

Grubhub has a “Just in Time” feature that tries to direct drivers to the moment an order is ready.

Garutti cautioned last quarter, though, the deal would result in short-term sales volatility as Shake Shack separated from other aggregators in markets where Grubhub doesn’t dominate share. Removing direct POS integrations with DoorDash, Postmates, and Caviar will negatively dampen the chain’s delivery revenue. A difference in pricing, placement or regional strength in non-Grubhub marketplaces will sag sales for a period of time as well, Garutti added.

“How much volatility this will cause during this transition period is uncertain,” he said.

Shake Shack also built region-by-region customer habits through other platforms over the past two years, while very little of its tests with Grubhub were taking place.

The company expects to remove other aggregators from integration in the next quarter, if not sooner.

So, Shake Shack will have to move those people over, which is no easy task in an app-loyal space.

That’s one reason marketing is about to kick up. The other is that delivery is now available “across virtually all company-operated” restaurants.

Shake Shack began actively promoting its Grubhub partnership just this week. It’s doing so via campaigns, channels, and targeted communications. In the past, it’s been mostly partner-based and marketplace-driven messaging.

Shake Shack had one of its most engaged Twitter posts in brand history Monday, giving away neon signs. “We've also been doing some free delivery promos,” he said. “Those things will come in and out. You'll see a lot of it. It will be national in certain areas and it will be regional for certain other things.”

Part of the partnership agreed that Grubhub would make a significant contribution in marketing dollars.

“We feel really good about the path that we're on,” Garutti said. “It’s just going to have some turns and twists as we go here.”

As for why Shake Shack chose the exclusive strategy, Garutti said, it comes down to guest experience and food quality. Also, the benefit “from the data that we learn about our guests, about [Grubhub], and how we can harness that.”

“We are going to be able to directly market with them and that'll be exciting for us,” he said.