"Chipotle's new For Real tagline and mission brings us back to our roots and reflects the principles we were founded on 25 years ago," says Chris Brandt, chief marketing officer.

Chipotle has designs to become a lifestyle brand. But its fresh marketing campaign, the largest in terms of spending within a quarter in company history, is as much a nod to its original purpose as it is to a renewed one.

Launched this week, Chipotle unveiled a fresh tagline—“Chipotle, for Real,” across all media activations in an effort to emphasize the chain’s commitment to food made with real ingredients. The new creative will spotlight Chipotle’s list of 51 ingredients “to make this information accessible to all consumers and encourages other restaurants to follow suit,” the company said.

“Chipotle's new For Real tagline and mission brings us back to our roots and reflects the principles we were founded on 25 years ago," said Chris Brandt, chief marketing officer, in a statement. "Chipotle has always emphasized food prepared fresh daily in all of our restaurants and we wanted this campaign to highlight that, reflecting our real principles and 'real' as a way of acting in the world. While often long and complicated ingredient lists are common in today's food industry, we like to say the only ingredient that's hard to pronounce at Chipotle is 'Chipotle.’”

In addition to traditional TV ads, out of home ads, digital and print ads, as well as Chipotle’s social media channels and website, the fast casual launched a second Instagram account, @ChipotleForReal, designed to educate followers about those 51 ingredients. It’s also a sign of how Chipotle aims to jump into the consumer conversation in ways it hadn’t before.

Brandt, formerly the executive vice president and chief brand officer at Bloomin’ Brands’ Outback Steakhouse, Carrabba’s, Bonefish Grill, and Fleming’s, who joined March 20, said in June that Chipotle was developing a new cultural narrative. “There is such a unique emotional component to this brand stemming from its authenticity and transparency about food that we need to reinforce and reignite,” he said. “To that end our ultimate marketing mission is to make Chipotle not just a food brand, but a purpose-driven lifestyle brand. … Chipotle will become a brand that people want to know about, want to be a part of, and want to wear as a badge.”

Chipotle did not provide numbers behind the new campaign, only to say, per Barrons, that it was the “biggest ad campaign ever in terms of spending within a quarter.” It’s scheduled to run through November 11.

The new ads, created by Venables Bell & Partners, feature the voice of Aaron May, who voiced Chipotle’s early-2018 ads. They’re focused on ingredients and preparation. Nothing overly fancy, just repositioned in what Chipotle hopes is a more impactful manner than past campaigns.

The print ads feature close-ups of raw ingredients, like avocado. With the tagline, the idea is to draw a line between Chipotle and its processed competitors.

Chipotle isn’t far removed from tapping Zenput to streamline its food-safety protocols. The brand teamed with the platform, used by Domino’s and KFC, to take the process mobile in the wake of recent issues and, of course, past ones. Most recently, a Powell, Ohio, store closed in July after more than 600 people reported illnesses. CEO Brian Niccol responded by saying Chipotle would retrain all of its employees, including an online knowledge assessment and quarterly updates. “Chipotle has a zero-tolerance policy for any violations of our stringent food safety standards and we are committed to doing all we can to ensure it does not happen again,” Niccol said at the time. 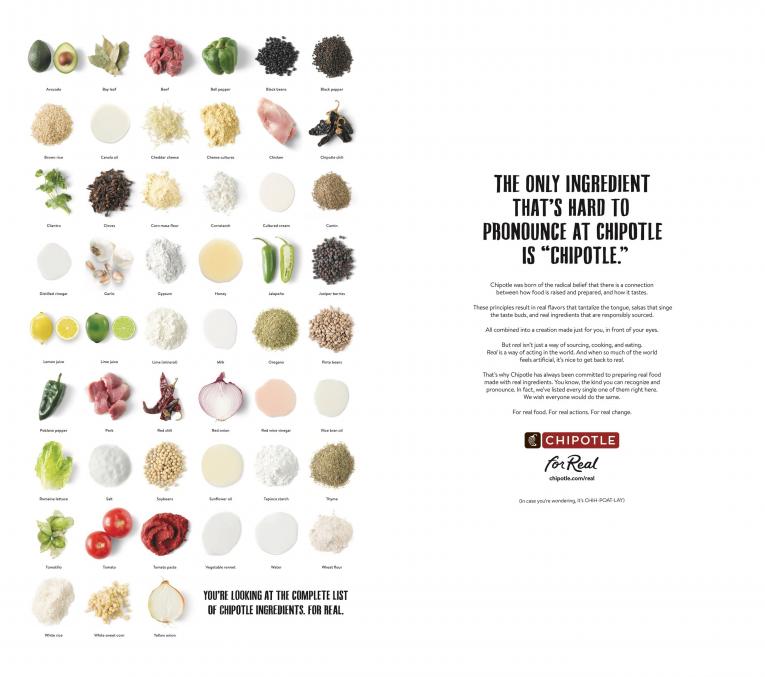