Carne Asada was so popular at Chipotle it stressed the company's supply chain.

It’s been a big year for Chipotle. It saw a stock surge. Its digital business is booming.

And the news gets better because the fast casual’s marketing efforts appear to be paying off, too.

The restaurant capped off 2019 with the highest quarter-over-quarter gains in advertising awareness among its sector peers, according to YouGov BrandIndex data. 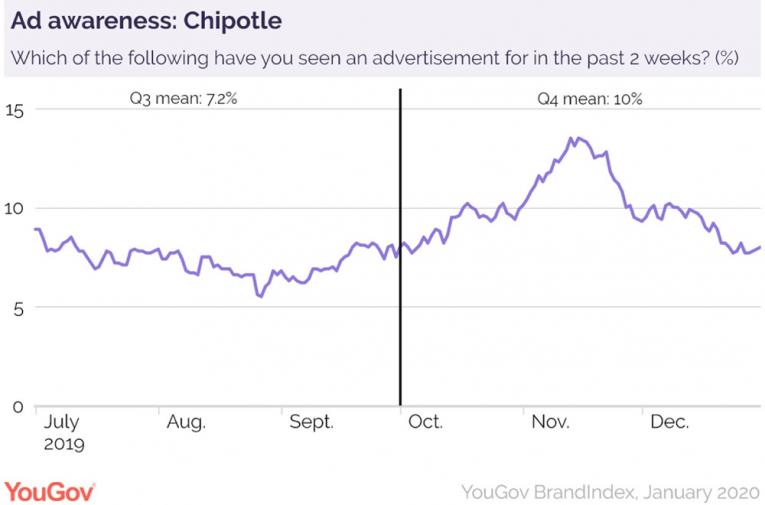 YouGov tracks Ad Awareness of thousands of brands every day, asking Americans “Which of the following have you seen an advertisement for in the past 2 weeks?” The metric is delivered as a percentage.

Compared to its previous quarterly average, Chipotle saw an awareness increase of nearly 3 percentage points in the year-end quarter ending December 31, a time when Ad Awareness numbers in the sector have by and large remained flat.

Chipotle's Ad Awareness uptick in September seems to coincide with the launch of its limited-time offer Carne Asada high-end steak option, which proved so popular, it put a strain on the restaurant’s supply. But it also prompted it consider making it a permanent menu item.

"We're incredibly encouraged by the customer response to Carne Asada and are exploring options to add this as a permanent menu item in the future," CEO Brian Niccol said.

The brand also flexed its marketing muscles this year, stepping away from traditional ads and used creative avenues to target a younger audience. It amped-up its presence on social media app TikTok and found success with its #ChipotleLidFlip hashtag. It’s even hiding coupon codes inside the source code of some startup websites.

Also during this quarter, the restaurant launched Meatless Monday perks for members of its reward program. That was a savvy marketing play for the restaurant: According to YouGov data on quick-service restaurants, Chipotle is rated very highly for quality among non-meat eaters, second only to Subway

“Quality” is a metric YouGov calculates by asking “Which of the following restaurant chains do you think represents good quality?”

While last year was a good year for the restaurant brand, 2020 is shaping up to be another good one.

BTIG analyst Peter Saleh wrote recently that restaurants that cater to take-out diners and have invested in advertising budgets are best positioned in 2020. Chipotle is testing digital-centric concepts with a focus on quick pickup.

“We believe this dynamic bodes well for the pizza delivery operators as well as concepts with significant off-premises sales, like Chipotle and Wingstop,” Saleh wrote.

The National Restaurant Association Show: It’s Great To Be Back
Wendy's Holds Steady in Face of Historic Inflation
How Restaurants Can Win the Delivery-Only Game

Ghost Kitchens: Here to Stay or Ready to Disappear?
Restaurant Recruitment Tips from McDonald’s Hiring Partner
The Changing Life of a Restaurant CMO

Are Higher Prices Catching Up to Restaurants?
How to Make Better Pricing Decisions for Your Restaurant: Part 5
Out of COVID, Starbucks Turns Focus to Wages, Efficiency, Sustainability