Dwyane Wade Handles the Heat of the Restaurant Business

Fast Casual | September 2020 | Sam Oches
Bob Metelus
Like many other former professional athletes before him, Dwyane Wade is investing in the restaurant industry as a major part of his post-basketball identity.

At a February 22 matchup between the NBA’s Miami Heat and Cleveland Cavaliers at Miami’s American Airlines Arena, under dimmed halftime lights, a spot-lit white jersey with red trim slowly lifted into the air, elevated to the rafters. Taking its place among four other names and numbers, the retired jersey emblazoned with No. 3 solidified the legend of Dwyane Wade, who spent 14-and-a-half of his 16 NBA seasons with the Heat.

The ceremony may have recognized the close of his playing career—a career that included three championships, 13 All-Star appearances, and one league scoring title—but Wade’s retirement ventures are just getting started.

Yes, it includes being married to Hollywood star Gabrielle Union and watching his son, Zaire, become a basketball star in his own right. But, like many other former professional athletes before him, Wade is also investing in the restaurant industry as a major part of his post-basketball identity.

In March 2018, Wade and former Heat teammate Udonis Haslem announced that, under the joint venture Forty-Three (a combination of their NBA numbers), they’d struck a deal with fast-casual pizza chain 800 Degrees to purchase the franchise rights to the South Florida region. Wade also agreed to a partnership role with the company that includes him serving as a global spokesman.

The deal with 800 Degrees was the culmination of a long search for the former teammates, who had agreed they wanted to work together in some form or fashion after their playing days were over.

“We had an opportunity to meet with 800 Degrees in L.A. one year when we were playing with the Heat together,” Wade says. “We liked the direction they were going in. At the time, they were just a pizza concept. They asked us what we were about, and for me and [Haslem], it was about family. We started having a conversation about what our 800 Degrees could look like.” 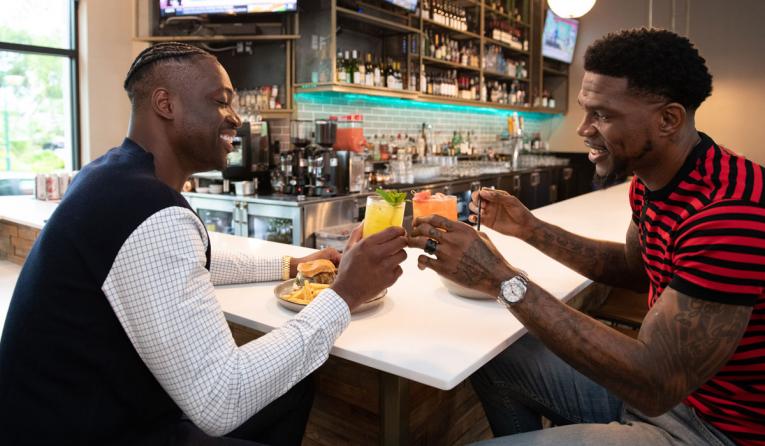 Dwyane Wade and Udonis Haslem are teammates once again.

While Haslem didn’t put up the same numbers as Wade in the NBA, he was considered one of Heat’s pillars in each of its three title seasons (2006, 2012, 2013), known for his rebounding and overall tenacity on the court. More importantly, Haslem is a veteran of the franchising space, owning Subway, Auntie Anne’s, Starbucks, and Einstein Bros. locations separate from Forty-Three.

“I knew he was in that space; I knew he knew a little bit more than I did about the restaurant space, the franchising space, etc., and I’m always open to a good business opportunity if it makes sense,” Wade says. “This made sense for both of us to do something together off the court for the first time.”

As for what the former teammates’ 800 Degrees looks like, it looks quite a bit different than the rest of the concept. While chef Anthony Carron launched 800 Degrees at the height of the fast-casual pizza boom as a counter-service alternative with a higher-quality, wood-fired product, Wade and Haslem opted to open a full-service version of the concept, complete with full bar and expanded menu offerings. Their first location opened in Miami’s Aventura neighborhood in the fall of 2018.

“We thought about where the world is going and how we can change 800 Degrees to not being just like other brands, just like Blaze, which is kind of similar,” Wade says. “We wanted to have our own feel to 800 Degrees, and also just to grow with where the market is growing, as well.”

The idea, he adds, was that a full-service vibe and bar would create a more family-friendly atmosphere, and one that’s just as good for brunch and happy hour as it is a quick lunch. The business partners also expanded the menu with UD Chicken Wings (the moniker references Haslem’s nickname) and the DWade Burger. Those items have since been added to most of the other 800 Degrees locations.

“We wanted to have our own feel to 800 Degrees, and also just to grow with where the market is growing, as well,” Wade says. 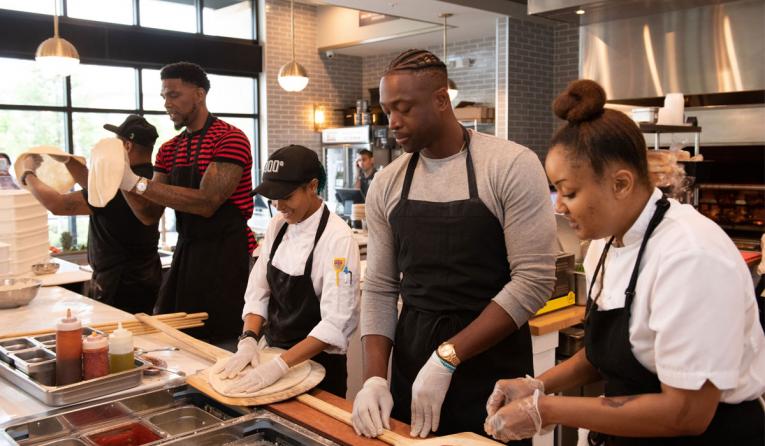 Wade has been hands-on from the start.

Carron says Wade and Haslem have been very hands-on through the process of opening their 800 Degrees franchise, involved with everything from design and menu to marketing and service. He adds that the business partners’ decision to go full-service was possible because the 800 Degrees concept is flexible depending on the local market—though the plan is still to expand mostly through the fast-casual format.

“There are locations and circumstances that are better suited to an elevated experience with more service touches and a broader menu,” Carron says. “The core of our menu with our amazing wood-fired pizzas, salads, chicken, and bowls is the thread that ties everything together, but in certain locations it makes sense to wrap some additional options around that core, which may at times include a bar, enhanced service, and an expanded menu.”

Wade and Haslem are, of course, not the first professional athletes to discover the potential of restaurant franchising as a post-career opportunity. From Hank Aaron to Shaquille O’Neal and Peyton Manning to Drew Brees, countless mega-stars have bought into franchise companies, sometimes even building robust multi-brand portfolios. One can even find other examples looking at Wade and Haslem’s former teammates; five members of the 2012–2013 Heat championship team are now active in foodservice (see sidebar).

Rikki Amos, executive director of the International Franchisee Association’s Foundation, says the many former athletes in franchising are no coincidence. She says athletes reflect the same kind of leadership and motivation for success that’s common in franchisees.

“When you match that hard work to consistent execution within a successful playbook, then you have the greatest chance for athletic success,” Amos says. “Franchising is very similar. Successful franchise owners excel at consistently implementing a tested playbook with a high degree of motivation because they are in business for themselves, but not by themselves.” 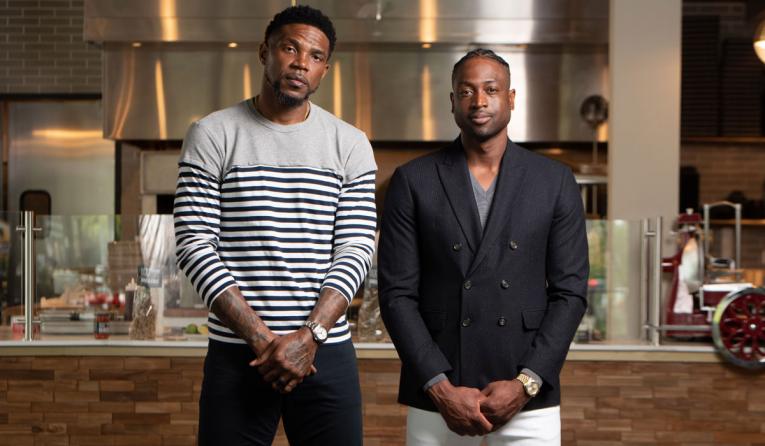 The COVID-19 pandemic put the brakes on Wade and Haslem’s growth plans, but they've focused on pivoting the brand and positioning for future expansion.

Wade says athletes are hit with a ton of investment opportunities from an early age because of how much money they quickly make. And, just like most everyone else, a lot of athletes love the idea of owning their own restaurants.

But not every athlete is suited to develop his or her own restaurant concept. Wade himself had a restaurant early in his career that he acknowledges was a failure—partly why he wanted to invest in a franchise rather than start from scratch all over again. And beyond having leadership skills and a competitive nature, Wade says, most former athletes have spent the majority of their lives operating as part of a team.

“You’ve got to have leaders, general managers, etc., but you’ve got to have a good team,” Wade says. “It takes everybody from a marketing standpoint, to word of mouth, to how you treat customers. We all come from a sport where it’s about team and it’s about figuring out how to work with a team and how to make a team become successful.”

Amos says other companies should be mindful of this link between athletes and franchising. That could especially be true after the pandemic, as franchise demand is likely to boom and brands can prioritize well-capitalized franchise partners.

The COVID-19 pandemic put the brakes on Wade and Haslem’s own growth; the pair were nearing completion on their second South Florida unit, but put that location on hold until further notice. Meanwhile, when their first location in Miami’s Aventura neighborhood closed for dine-in service, Wade and Haslem transitioned to curbside pickup and third-party delivery.

“To incentivize our customers to order curbside pickup so we could avoid the high commission fees from third-party delivery services, we created exclusive deals for pick-up only,” Wade says. “We added alcohol to-go and we had a lot of success with the launch of Family Meals, particularly one featuring our popular chicken wings, that were only available by ordering directly with us.” After receiving the green light to open at limited capacity in May, the pair originally did so with counter service only before adding limited table service with extra sanitation measures.

Like all operators today, the future is a bit of a mystery for Wade. But one thing is certain: The foodservice industry will continue to be a part of it. “This is something I definitely want to do,” he says. “Right now I’m busy into my second act and trying to figure out what’s the next this or what’s the next that.”