The double-drive-thru model has no dining room.

Quick-growing franchise Freddy's Frozen Custard & Steakburgers is joining the "Restaurant of the Future" ranks. And it’s doing so with a model that become familiar during COVID-19’s year-plus assault on industry trends—a concept without a dining room.

Freddy’s recently broke ground on a new site set to host an evolved prototype, which boasts a double drive-thru, walk-up ordering station, and, as noted, no seating inside. It will debut in Salina, Kansas.

Freddy’s said the prototype offers an additional option for franchisees looking to capitalize on the consumer demand following the pandemic. It conceived the features after conducting a brand study, which led to parking stalls for curbside pickup and patio seating as well.

“As we continue to make such great strides in our franchise development growth, we’re proud that our restaurant design strategy has continued to evolve, allowing us to offer a variety of options to meet the varying needs of our guests,” Chris Dull, CEO of Freddy’s, said in a statement. “This prototype is the latest in a variety of available options and will cater to the growing number of our on-the-go guests who are mobile-minded and benefit from the ease and convenience of this prototype’s features. This new restaurant design option will fit seamlessly with our existing drive-thru and mobile ordering capabilities.”

It’s been an eventful run for Freddy’s. The fast casual was purchased by private equity firm Thompson Street Capital Partners in March in an undisclosed deal. Freddy’s opened 30 stores in the U.S. last year, including its 400th. After experiencing a week in March where sales were down 38 percent, the chain finished 2020 by growing AUV 6.5 percent, and increasing systemwide sales 21.2 percent. In July, the brand experienced a 47 percent increase in drive-thru traffic and reduced wait times by 28 percent.

It also signed six new development groups that committed to more than 60 development options and signed development agreements with existing franchisees who agreed to target additional territories and more than 70 new restaurant options.

In May, the brand announced the signing of four multi-unit agreements that will result in a total of 29 new restaurants

Freddy’s said at the time six restaurants expected to open in the first quarter of the year, including locations in Boise, Idaho; Memphis, Tennessee; and Pensacola, Florida.

The brand continued also continued non-traditional expansion in 2021 with the opening of a location in the Wichita Wind Surge Minor League Baseball stadium. Upcoming openings are slated for El Paso, Texas; Durango, Colorado; Florence, South Carolina; Streetsboro, Ohio; Lexington, Kentucky; Newton, Kansas, and a Linden, New Jersey location that will mark the first Freddy’s in the state. By July, the brand expects to have expanded its presence to 33 states. 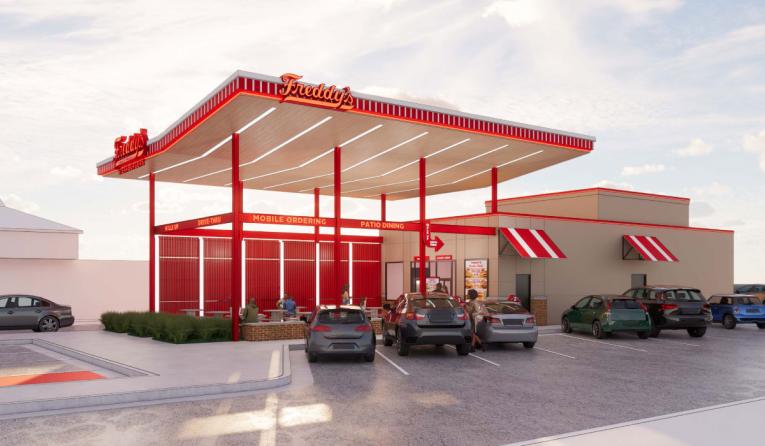 Freddy's has big growth plans in 2021 and beyond.

“As our year-to-date growth demonstrates, we are well positioned to bring the Freddy’s experience to a number of new communities throughout the country,” Dull says. “The continued growth we’re experiencing is a direct result of the hard work that our incredible Freddy’s family of team members and franchise owners continue to deliver, and we’re thrilled to share in this success with them. This new prototype option is just another example of our constant efforts to continue The Freddy’s Way as we expand our offerings to franchise owners and look forward to the many new possibilities and benefits it offers our guests.”

A restaurant model without a drive-thru has become commonplace in recent months, in terms of prototypes. Starbucks, McDonald’s, Taco Bell, KFC, Wendy’s, Chipotle, El Pollo Loco, and others have all outlined plans to open such units.

As Freddy’s drive-thru growth proves, there’s no secret why. The rise of off-premises business, especially via mobile ordering, is driving agility into the industry’s real estate capabilities as brands look to leverage a rationalized market. Freddy’s accelerated the rollout of a mobile ordering platform during COVID and saw notable growth in the use of its app and loyalty program. Curbside delivery was implemented in certain markets and is continuing to expand, too.