Sweetgreen is Now Valued at $1.6 Billion

Sweetgreen will expand into new cities with the investment as well.

Sweetgreen made headlines last November when it raised $200 million in a funding round led by asset management mogul Fidelity Investments. It brought the fast casual’s secured total equity to roughly $365 million, counting Shake Shack founder Danny Meyer. But that wasn’t the blockbuster kicker. Sweetgreen was suddenly valued at more than $1 billion, giving it the rare “unicorn” status reserved for privately held startups that eclipse the figure. And all that for a salad chain that started 12 years ago as a small D.C. restaurant from three recent Georgetown graduates, Nicolas Jammet, Nathaniel Ru, and Jonathan Neman.

The 97-unit chain announced Monday it closed another significant round. This time, picking up $150 million from Lone Pine Capital and D1 Capital Partners with participation from True Ventures and other existing investors. The Culver City, California-based company said it was valued at $1.6 billion in the round, a full 60 percent higher than just 10 months ago.

“We’re building a new type of food company and a sustainable supply chain to challenge how we think about real food, explore innovative new retail formats, and elevate the consumer experience,” said Neman, Sweetgreen’s CEO, in a statement. “This foundation will allow us to push boundaries and broaden our impact, doing even more with our suppliers, partners, and technology so that together we can bring about industry-wide change.”

Perhaps the biggest aftershock of the funding will be Sweetgreen’s “Outpost” expansion, which it said it plans to ignite with the infusion of capital.

Sweetgreen launched Outpost in September 2018 as a solution for free delivery at offices. It started as 13 locations and has grown to more than 400, with 600 expected by year’s end.

Essentially, Sweetgreen developed an app and system of drop-off points to group deliveries so it can efficiently supply multiple orders at once during set peak times. It started by partnering with larger companies such as WeWork, Nike, Headspace, and MeUndies by implementing drop-off locations in these stores’ offices. Kind of like a virtual cafeteria.

Neman said at the time Outpost was great for employers because it provided a “really cool amenity of service for the employees.”

And unlike office catering, customers can order exactly what they want off Sweetgreen’s regular menu and even use their loyalty points if they choose. 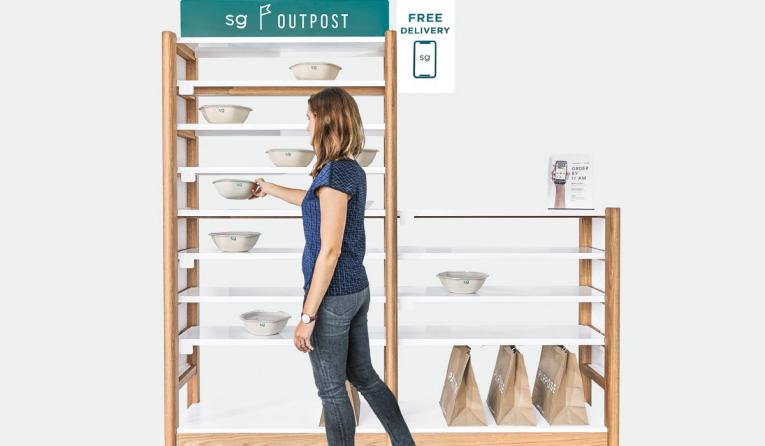 Sweetgreen's"Outpost" comes free to the employer.

As the picture above shows, Outpost looks like a bookshelf unit or a pick-up area you might see in a restaurant’s off-premises carveout. They can be assembled in offices, hospitals, schools, etc., at no cost to the employer. They just sign up online.

Signage around the shelves provide information about the app and ordering process. Sweetgreen also created virtual drop-off points that don’t involve shelves that can be set up at an office’s front desk, for example. This could evolve to where there’s drop-off groups for smaller parties interested in the Outpost system.

When Sweetgreen first debuted the platform, the company said it could bring 3,000 to market. The investment will speed that up, although Sweetgreen did not provide an exact target figure this time around.

“With over 50 percent of Sweetgreen orders taking place through digital channels, mobile dining has swiftly become the next phase for the future of food,” Sweetgreen said in a release. “To meet the expectations of its evolving customer base, Sweetgreen will test and deploy emerging technologies and new models.”

Outpost is chief among them.

In addition to the development of the delivery disruptor, Sweetgreen said it will use the money to expand into new cities, including Miami; Denver; and Austin, Texas.

The brand also expects to launch delivery on its own app in 2020, “creating another channel to meet customers wherever they are.”

Lastly, Sweetgreen intends to continue its support of FoodCorps’ work in schools and cafeterias, it said. The chain provided $1 million in funding to aid the company’s growth plans, which offers hands-on learning to kids in an effort to get them to eat more fruits and vegetables. In mid-September, Sweetgreen said the program will bring innovations to 15 cafeterias and 6,500 students in states across the country—Arkansas, Georgia, Iowa, Maine, Massachusetts, Michigan, New Jersey, New York, Oregon, and Virginia

Sweetgreen’s multi-channel approach to food is one of the reasons its valuation has climbed so quickly, and so high. Jennifer Ekstein, a senior consultant at Vivaldi, told Eater that the brand’s potential rests in a fast-casual restaurant turning into a food platform. “Sweetgreen looks beyond just the food they serve—it’s about how they can create an entire food ecosystem that reaches their customers in ways personalized to them,” she said.

Restaurant consultant Judge Graham added in the article that Sweetgreen built “almost more of a social, political, cultural brand versus a fast-food occasion,” and that the chain is “almost a tech company,” more than a restaurant in the way it uses digital channels to meet customers where they are. This includes an app with more than a million users and the use of blockchain technology for its supply chain to ensure traceability. Sweetgreen also used digital products to forecast sales, deploy labor, and order food, Neman told The Wall Street Journal.

Kelly Granat, a portfolio manager at Lone Pine Capital, one of the co-leaders in the round, said to the WSJ that the hedge fund was investing “with the hopes that this will be a public company one day.” Sweetgreen has now raised more than $500 million, $350 million in just the past year.