U.S. closures are picking up as the burger brand looks to update its asset base.
Fast Food | July 2019 | Danny Klein

While the fast-food industry is no stranger to convenience, a rise in technology and accessibility, like mobile pay and delivery, has quickly dated the assets of many brands. This was evident recently when Pizza Hut announced it would shutter, and aim to replace, close to 500 U.S. restaurants as it moved away from dine-in focused venues to carry-out, delivery friendly models.

Burger King appears to be on the same path. The chain’s global unit growth was 5.8 percent in the second quarter of fiscal 2019, announced August 2—down from 6.4 percent in the prior-year period. Restaurant Brands International chief executive Jose Cil credited the dip to the timing of openings as well as Burger King's U.S. “closure program."

Burger King, similar to Pizza Hut, is trimming lower-volume stores in favor of units designed to unlock digital changes. The “Burger King of Tomorrow” store, modeled after its Garden Grill package, features double drive-thru lanes and outdoor digital menuboards. The latter is critical, Cil previously noted, because it drives increased check and allows for integration with other technologies, like mobile apps. It also provides franchisees cost savings on printed menu and media signage. Inside, the restaurant refreshes décor and builds a digitally integrated experience for guests, complete with self-order kiosks. 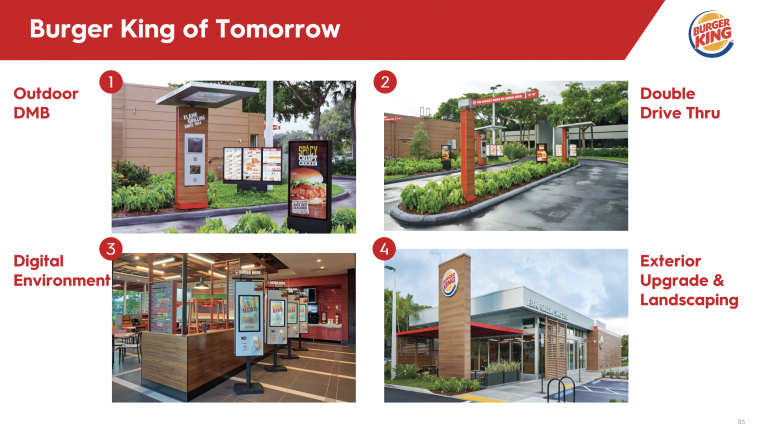 Cil did not provide a timeline for U.S. closures, or a figure, in the conference call. At its investor day in May, the company said, over the next two years, it expects to shutter 200–250 restaurants—a shift it believes will position Burger King for future expansion as well as boost profitability in the near-term. That rate is an acceleration from the last couple of years. Burger King opened net 104 U.S. locations in 2018 and 70 the prior year. During that span, it’s averaged about 140 closures of underperforming stores. Last year, Burger King debuted roughly 200 and closed 100.

Here’s a look at the last seven years in U.S. net restaurant growth for Burger King:

The reason for the closures, beyond tech improvements, is pretty clear. Burger King said 2018 openings produced average-unit volumes of $1.5 million. The stores it shuttered: $1 million.

RBI made headlines in May when it said it planned to boom from roughly 26,000 restaurants to more than 40,000 globally over the next 8–10 years. Where does Burger King figure into the mix? Much of the runway leads to international.

And if you examine the side-by-side market-share battle, RBI sees plenty of potential to keep that global wheel turning. 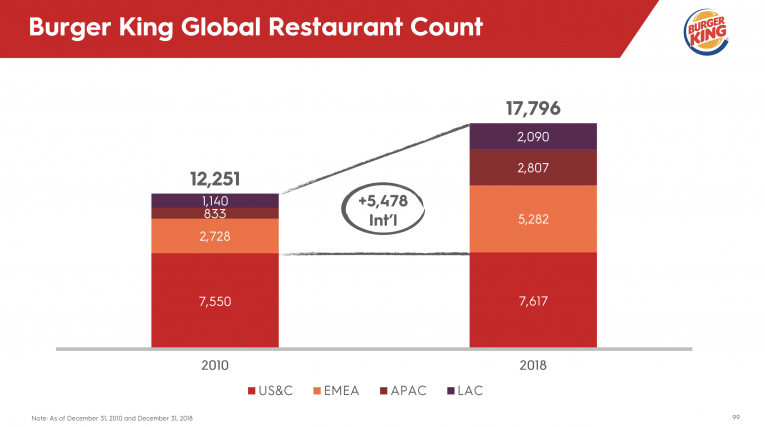 Cil spoke often about this opportunity during the call. Burger King generated systemwide sales growth of nearly 10 percent in Q2, including same-store sales of 3.6 percent (it was 1.8 percent in Q2 2018). This was fueled primarily by strong international results, where Burger King’s systemwide sales jumped 17.8 percent. If you stack that on the comparable period’s 13.4 percent figure, the chain’s non-U.S. business has significant momentum. U.S. Comps grew 1.5 percent this past quarter, which was a solid result climbing off Q2 2018’s 3.3 percent growth.

Burger King, though, has now ballooned to more than 10,000 restaurants globally and continues to spread out, pushing 6.5 percent international same-stores growth in Q2 with nearly 10 percent unit expansion.

And here’s a key point from Cil: “A large portion of our sales are digital in many of these international markets and we're beginning to share best practices all around the world and right here in our home market as well.”

More than 8,700 Burger Kings globally offer delivery, and digital remains a key part of the customer journey. In China, for example, more than 90 percent of its 1,000 or so units offer the service. It’s 80 percent-plus in Korea. Kiosks are a big part of the brand’s European mix, as well as growing app users, CFO Matt Dunnigan said.

That’s where the future of Burger King’s U.S. business is headed. Where is it today?

Impossible, delivery, and a value question

“We know that the best way to grow our business is a balanced core premium and value offering that caters to all guests and it seems that we did not have strong enough value offers and messaging throughout most of the quarter,” Cil said.

He added that Burger King addressed the issue in early July with its $1 tacos and “early results are encouraging.”

“We occasionally have a bit of imbalance on media allocation and maybe some of the promotional activations weren't as strong as they could have been, but we feel good about the plans we have long-term,” Cil said

Burger King announced this past week it is bringing the Impossible Whopper nationwide. The product arrives with a $7 deal where guests get the burger plus an original Whopper and can taste test themselves. Like many of Burger King’s recent promotions, it’s intended to boost app downloads and awareness—the deal is exclusive to DoorDash and Burger King’s app.

Cil said the Impossible Whopper attracted younger guests and shifted demographics. In the U.S. and Europe, with plant-based options (this includes Tim Hortons), the chain witnessed two types of behaviors: “We’re seeing existing guests come more often,” Cil said,” and actually changing their orders and try [something] different. It’s kind of the same product, but with different proteins. And then we’re seeing new guests as well.”

“We feel good about it,” he added. “We feel this is a long-term opportunity for the business.

Chief operating officer Josh Kobza provided an update regarding Burger King’s delivery efforts. The chain rolled the service to about 3,500 restaurants. “And we've seen pretty significant growth in terms of the sales per restaurant per day, as we've continued to grow coverage and as we go through the rest of the year, I'd expect to see that to continue to grow,” he said.

Kobza said Burger King is working on expanding deployment with Uber Eats “quite rapidly over the next few months.”

“Such that we’ll have really significant coverage with multiple aggregators within just the next few months here,” he added.

Delivery is part of a two-front daypart approach for Burger King. The chain believes delivery can unlock dinner and late-night incremental visits while it works in-house to boost breakfast. Burger King mentioned igniting breakfast in recent quarters, saying it plans to introduce innovation to grow the top-line on a segment where it lags some competitors. Breakfast represents about 14 percent of Burger King’s total sales. Some chains in the category see as much as 34 percent. McDonald’s is about 25 percent.

“I think we have a solid business there that can be much bigger and we've launched and started to make progress on beverages in breakfast as well as other innovation on the breakfast side,” Cil said.

On a side note, the chain recently received top honors in the Titanium Lions category at Cannes Lions for its “Whopper Detour” ad campaign, which sparked 1.5 million downloads of its app. Customers received a 1-cent Whopper coupon when they went to a McDonald’s location.

RBI net income fell 18 percent to $257 million in Q2. On an adjusted basis, it earned 71 cents per share, which topped Refinitiv estimates of 65 cents. Revenue upped 4.2 percent to $1.4 billion.

Comparable sales increased 0.5 percent at Tim Hortons versus a flat result in the prior-year period. Popeyes saw 3 percent growth off last year’s 2.9 percent lift. The chains reported net restaurant growth of 1.6 and 6.1 percent, respectively, to bring their total unit counts to 4,872 and 3,156 restaurants. Burger King had 18,008 (7,272 domestic). For Popeyes, 2,379 of its locations are in the U.S. Tim Hortons’ fleet includes 3,979 in Canada.