Jack in the Box Finds its Place in the Value Wars

Jack in the Box's third quarter was one of its best in recent memory.

Where Jack in the Box slots into the value wars has remained a bit nebulous over the years. Generally, the 2,242-unit (2,105 franchises) chain holds steadfast to these principles: Refrain from deep discounting, especially on core products, and protect brand health at all costs. But what Jack in the Box often did was take those recognizable, differentiated products, lower price points, and bundle them. And as value-focused marketing accelerated throughout quick service, including within the delivery aggregator space, this led to customers trading down and not fueling Jack in the Box’s sales.

Earlier in the year, the brand put a spotlight on the issue: 90-plus percent of the transaction losses Jack in the Box weathered in recent years, it said, took place at the below-$5 level. The value customer was looking for two things—established meals around that price point, or the ability to combine a bunch of individual items and put them together for less than $5. Jack in the Box faltered presenting enough of that to guests.

Its a la carte offerings skewed higher in price, meaning the chain was losing ground on everyday items running more expensive than competitors. Half of Jack in the Box’s brand equity is tied to unique items—guests less concerned about price than flavor. The other half, though, looks to value. In the past, that’s where tacos came into everyday play. But the standing muddied when prices on the signature item rose.

Jack in the Box, however, is ready to reroute the narrative, Comma said, and is already seeing results. “I think we have essentially found our way to compete in the [quick-service] phase effectively on value,” he said during the company’s August 8 third-quarter review. “And I think we were missing that for quite some time.”

Firstly, Jack in the Box’s Q3 results were among its best in years. Same-store sales upped 2.7 percent systemwide—the brand’s strongest since Q1 2017, and a solid improvement from the year-ago run of 0.5 percent. All-day products positively contributed to sales growth and year-over-year transactions. Traffic was flat in corporate units, “which is our best transaction performance in several years,” CFO Lance Tucker said.

The big culprit was strategic value. Specifically, a greater emphasis on bundled value that drove traffic and sales trends higher, while also maintaining margins. Company restaurant-level margins were 27 percent in Q3, 50 basis points lower than the prior year due to increases in labor and food and packaging costs. Wage inflation was about 6.5 percent. But that’s a solid overall dip given California and Texas account for 70 percent-plus of the chain’s total business.

Pulsing value in new items and LTOs is margin friendly for Jack in the Box because it's not discounting a bunch of core items where franchisees are enjoying strong marins and have high sales mix.

Jack in the Box’s primary promotion throughout Q3 was a $4.99 combo that features its new spicy chicken strips. Most markets also offered a $4.99 Triple Bonus Jack combo that included curly fries. The brand also brought back a 2 for $4 breakfast croissant deal.

This construct didn’t adversely affect average check, Comma said, despite there being a focus on value—something lacking in recent quarters. In fact, check for value prime combos was “significantly” higher in Q3 than other orders due to upsell add-ons.

“That price point is very attractive at the below $5 mark, but the ability to either add proteins or additional add-on exciting snacks has worked very well for our operation." — Jack in the Box CEO Lenny Comma.

Many of Jack in the Box’s value-oriented deals are either new items or LTOs. Comma said this keeps the brand aligned with its aforementioned, iron-clad directive: minimize the risk of diluting core products. The difference now, though? Strategically build in upsell opportunities via promotions that push check averages higher.

Tucker said designing compelling value bundles enables upselling and allows Jack in the Box to capitalize on incremental transactions. In Q3, check lifted 2.8 percent, comprised of about 2.3 percent of pricing.

“That price point is very attractive at the below $5 mark, but the ability to either add proteins or additional add-on exciting snacks has worked very well for our operation,” Comma added.

Jack in the Box will continue pulsing LTO bundle deals at competitive prices, he said. All created with the goal of encourage additional purchases.

But speaking to the earlier everyday point, Common said, the chain will look to restore the equity it lost when it raised taco prices. He didn’t provide concrete details, only saying, “there’ll be some permanent additions coming in the future as well.”

“I do think that it's important that we don't just believe that we can live on LTOs and marketing promotion,” he said. “… You'll see us do that and I think that that creates more of a permanent sales layer or restoration of a lost sales layer that allows us to bring back or bring up the base of sales altogether. And then everything else will ladder on top of that.”

These LTO bundled-value boxes, however, typically feature a new item or line extension coupled with a complementary add-on or upsell. Comma said they’re easier to execute for employees and push with marketing. “We're also making sure that that advertising is being spread across multiple day parts and our offerings that we can balance out things like breakfast versus dinner or lunch offering, and I think that that's a more balanced approach as well,” he said.

The goal for Jack in the Box has always been to guard what separates its brand from fast-food competitors, and not lose traction trying to drive value or compete quarter by quarter. But there needs to be some balance. It can preserve equity and still present reasonable price points that appeal to value seekers. Essentially, give light users something to latch onto instead of expecting every visit to stem from frequent guests.

“But if they are one of our tried-and-true loyal customers looking for those credible items, they're going to typically bundle more than what we presented to them, within that bundled deal. And that's exactly what we're seeing,” Comma said.

An example: The Donut Holes currently being sold for $1. That’s a convenient add-on for customers and an easy upsell for employees. “For us, we’ve got to find that sweet spot with combos and credible items that attract a guest that maybe isn’t just looking for value, while at the same time, present something at value price for those who are.”I

If Jack in the Box caters to the below-$5 price point it will bring value seekers back. It’s not a matter of those consumers trading up, as some quick-serves court, since they’re not trading down from the higher-priced offerings to the value-oriented ones. They’re simply not the same customer, and it comes down to pleasing both. Without those deals, the value-driven guest will trade to one of Jack in the Box's competitors. So, the answer: Not just bundled deals, but bundles below and around the $5 figure. 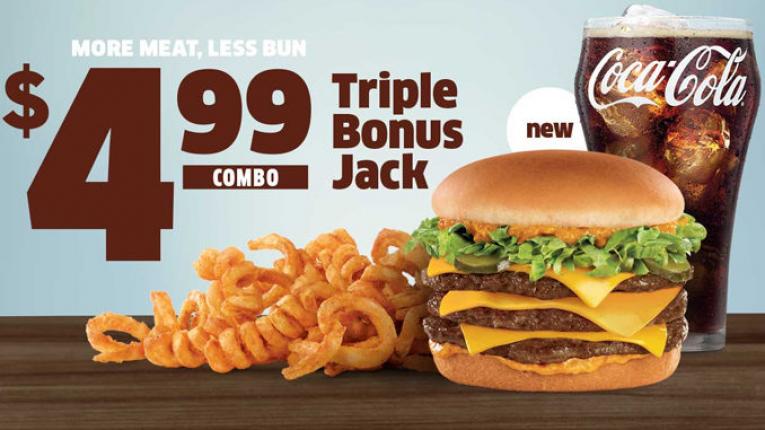 Bundled value is where Jack in the Box is winning.

The other part to this equation

Jack in the Box continues to work on simplification. Comma said the goal is to better service by a minute on average. Phase one of the initiative rolled out systemwide in July. It included testing opportunities to reduce redundant SKUs and delete some low-volume items. This was a key change. For instance, Jack in the Box once had five-plus mayo-related sauces; seven-plus cheeses, and a “ridiculous number of bread carriers,” Comma said. The chain found it could slightly modify certain products by using one ingredient over several without the consumer satisfaction dropping off dramatically.

Previously, Jack in the Box created menu items by developing what it thought was the best product for the guest. “And today, we actually have a team of people that combines operations, training, the R&D and culinary and marketing folks, supply chain folks, all-in-one team,” Comma said last quarter.

Phase 1 was “really just scratching the surface when it comes to making meaningful improvements the benefits of service and increased throughput,” he added.

The next phase “changes the way we operate.”

Ongoing improvements in service helped Jack in the Box reduce the number of complaints. In the past, Comma said, “those sorts of disappointments,” were strongly correlated to sales and transaction declines.

Feedback so far from operators suggests it’s easier to train employees, food waste is down, and there’s no real material impact on guest satisfaction from the SKU cutbacks.

“We do think that if we can change some of the procedures in back-of-the-house specific to these items, we'll be able to make it a lot easier for our crews to meet the speed objectives that we have,” Comma said.

Additionally, Jack in the Box is testing digital menu boards. It’s helped streamline options for customers. It can take the last 15 orders and advertise those for someone walking up. Potentially, the brand could present items by daypart that customers are likely to buy, and thus, ease the ordering process. “And then also, as you start to have a relationship with those consumers into the future, you can evolve that platform to a place where you are communicating with consumers on a one-to-one basis based on their history of purchases with the brand,” he said.