Pizza Hut's first NFL campaign is off to a solid start.

It’s no secret that fast foot and football go together. Beyond the notion that guests order food while watching the big-screen from their couch, it’s also accurate that many football viewers fit snuggly into the quick-service demographic. Here’s some tangible proof from TVision, a TV and ad measurement company that takes a different approach to the metric. Instead of box and program readings you typically see, TVision measures audience engagement by actually tracking who’s looking at the TV screen. It does so with technology that’s not all that different from what you might see on an Xbox Kinect sensor device. People agree to use the technology and TVision starts gathering intel.

READ MORE: Which quick-serves are winning the TV battle?

The company provided QSR with a look at how some of the top quick-service brands’ TV ads performed five weeks through the NFL calendar. Let’s examine how they all stack up by Creative Attention Score (CAS), a measure defined by a commercial’s ability to break through by normalizing for the average attention of the surrounding commercial pod. CAS isolates the impact of the creative execution on a viewer’s eyes-on-screen attention. Basically, how engaged is the user with the given ad.

From a helicopter view: quick-service ads are more likely to break through during NFL programming than other programming. The data showed a 12 percent more likelihood of being watched.

“Quick-service ads broke through 12 percent more on NFL programming than on non-NFL programming. Based on our data, which measures how ads breakthrough to capture viewer attention, quick-service ads are clearly resonating during NFL games," said Raman Sehgal, vice president of marketing at TVision.

All of the top five quick-service ads over the first five weeks of the season have performed better on NFL than other programming.

The graph below illustrates the difference:

Domino’s, even with Pizza Hut being the official sponsor of the NFL, proved to break through the most during NFL programming. Below is a chart that shows how effective its audio triggers were to NFL viewers.

If you look at the NFL line, it spikes during key points of the “Pave Way” ad, showing that Domino’s message resonated with this base. 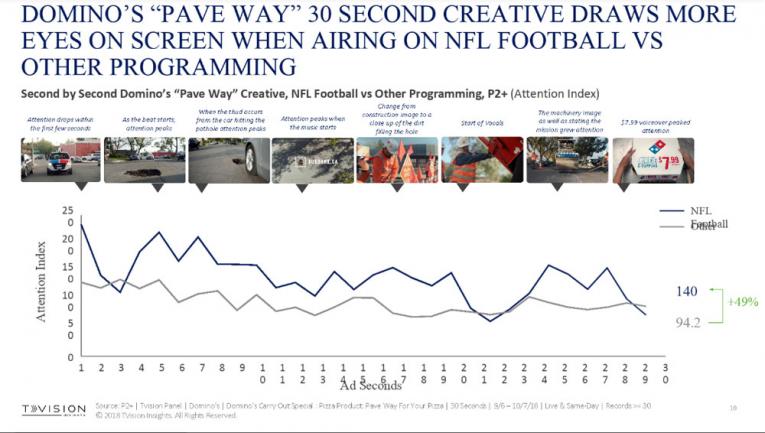 Another interesting comparison was the side-by-side, year-over-year look at Papa John’s and Pizza Hut. Pizza Hut, in its first year with the NFL sponsorship, is seeing a 19 percent higher (18–49 age group) score than Papa John’s was at this time last year, when it was still in the sponsorship role. That’s also 14 percent better break-through than Papa Johns saw across the entire 2017 season

This could mean a few things, but perhaps it points to something Papa John’s expressed when the two organizations originally decided to split—that it wasn’t entirely a move in response to founder John Schnatter’s suddenly strained relationship with the NFL. To what degree it was, if at all, we might never truly know. But maybe the ads just weren’t hitting home with the same force after campaign attrition set in. Back in February, when the announcement was made, CEO Steve Ritchie said, “While the NFL remains an important channel for us, we have determined that there are better ways to reach and activate this audience. Thus we will shift our marketing from the broader NFL sponsorship to focus on our partnership with 22 specific NFL teams, a significant presence on league broadcast and digital platforms and on our relationships with many of the league's most popular players and personalities.” 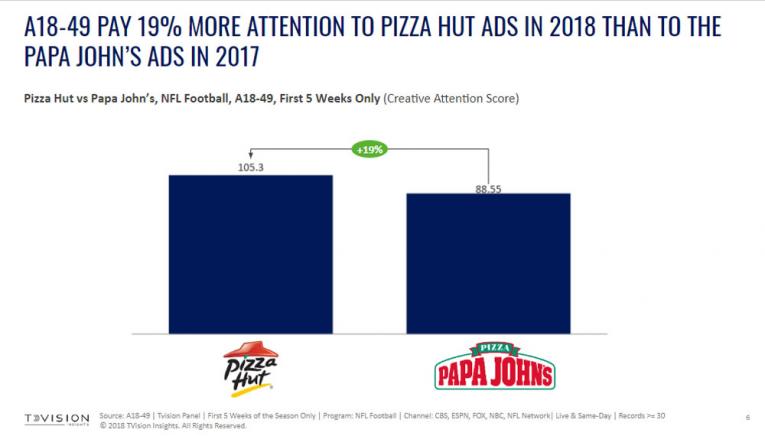 Given all that’s happened since, it will be pretty much impossible to judge if that strategy turns out to be more effective than the old one. Schnatter, often the face of the NFL ads, is currently railing against the company’s management and was removed from marketing materials. Over the continued course of this battle, which followed Schnatter’s conference-call racial slur that hit headlines in July and subsequent departure as chairman, Papa John’s brand perception has been an evolving conversation. Hard to place the NFL effect into a lens that doesn’t include that. Not to mention, Papa John's reworked its ad direction to center employees in its "Voices" campaign and tapped Havas Media as its agency of record in mid-October. So there are many, many factors at play.

When Papa John’s and the NFL cut official ties, however, many pundits quickly pointed to Schnatter’s earlier comments about the NFL’s handling of national anthem protests, when he said: “The NFL has hurt us. And more importantly, by not resolving the current debacle to the player and owners' satisfaction, NFL leadership has hurt Papa John's shareholders. The NFL has been a long and valued partner over the years, but we are certainly disappointed that the NFL and its leadership did not resolve the ongoing situation to the satisfaction of all parties long ago.” The company responded to the backlash by apologizing on social media and even had to condemn white supremacy after a neo-Nazi site, The Daily Storm, endorsed Papa John’s and published a post that asked if the chain was “the official pizza of the alt-right.”

Regardless of the back-story or whether this played a role for Papa John's, the new NFL deal seems to be working out well for Pizza Hut in Year 1. In September, the YUM! Brands chain unveiled its extensive first campaign, which included a “Game Plan” digital platform via its Huts Rewards loyalty program that pulses exclusive deals and sends “kickoff reminders” to guests before their favorite game. It also created an augmented reality experience of cornhole to go with its pizza boxes and tapped Pittsburgh Steelers wideouts Antonio Brown and Juju Smith Schuster to produce ad messaging.

“Through the first five weeks of this season, Pizza Hut, the NFL's new pizza sponsor, sees 19 percent better breakthrough than Papa Johns, the NFL's previous pizza sponsor, did in the equivalent time period last year,” Sehgal said. “The data shows that, so far, this an effective sponsorship for Pizza Hut. While Papa John's decision to pull out of the NFL sponsorship was certainly multi-faceted, our data shows that the Papa John's creative was not breaking through as much as other quick-service advertisers."

Hot Dogs are Getting Hot Again for Restaurants
Blaze Has New CEO, but Same Cult Following
Has Chipotle Raised its Prices Too Much?

Supporting New Restaurant Franchisees, By Experience Level
Pal’s Success and Longevity is Anything but Sudden
The Power of Transformation in the Restaurant World