Burger King is third in the burger wars, but Restaurant Brands International is setting the company up for massive growth in the next decade.

Restaurant Brands International (RBI) has only been around since 2014, but its short history has been packed with surprises. RBI formed when Burger King merged with Tim Hortons, and it bought Popeyes Louisiana Kitchen for $1.8 billion in 2017 to bring its total to three major brands. Then, in 2019, founding CEO Daniel Schwartz stepped down, and Jose Cil, who was most recently president of Burger King, stepped in to take his place—and hopefully to spread the success of RBI’s biggest brand across its entire portfolio.

With competition on all sides, low traffic roiling the industry, and analysts forecasting a recession in the next couple of years, what is RBI doing now to stay ahead of the quick-service game? Analysts weighed in on how the company is leveraging its diverse portfolio and scale to keep up with the broader industry—and offered some thoughts on how RBI might do even better.

Links in the chain

After RBI’s Investor Day in May 2019, analysts were surprised to learn that the focus was on core markets rather than new.

“For Jose’s purposes, I think so far there’s an aggressive and tactical approach here in the U.S. and Canada,” says Jeremy Scott, restaurant and proteins analyst at Mizuho. “There’s far more focus on the innovation pipeline here. It seems like their ducks are all in a row, they feel they’ve got a handle on the right price points, and they’re building in new technology and their POS integration.”

WHERE BURGER KING RANKS ON THE QSR 50

Even though Tim Hortons’ same-store sales decreased in 2018 over the previous year, the chain is in a good position, says Tim Powell, managing principal at Q1 Consulting. “Unlike Dunkin’ and Starbucks, Tim Hortons is not focused solely on coffee—and it benefits from the ‘grazers’ who can visit in the morning after the kids’ soccer match and also between the times of 2 p.m. and 5 p.m. for sandwiches and savory items,” he says. “It will continue to hold a strong position in [quick-service] coffee and doughnuts.”

Popeyes has a tougher challenge in front of it due to its more direct competition with KFC. The concept started testing delivery, which has helped bolster growth—but a lot of growth has also come from new-unit openings. The chain went from 2,600 units in February 2017 to 3,120 units as of April 2019. “Same-store-sales at Popeyes have been relatively flat to declining, which is concerning,” Powell says. “In our consumer work, we’ve found that Popeyes has a high rating for fried-chicken quality, but unit appearance and hospitality have been a hindrance.” In addition, more upscale fast-casual chains like Raising Cane’s and Zaxby’s present heavy competition for Popeyes—not to mention the ever-present chicken titan, Chick-fil-A.

R. J. Hottovy, senior retail and restaurant analyst at Morningstar, points out that Popeyes is still in the early stages of being a work in progress.

More so than brand performance, Powell is concerned with Cil’s emphasis on “top line” growth—growth in gross sales from opening new units. New stores often lead to short-term sales, but become a drag on revenues and traffic in the longer-term.

“In the climate we are in now, it would be a better move to focus on unit economics and same-store sales, so that when a recession hits, Burger King remains lean,” he says. “The biggest challenge it faces right now is becoming a destination when traffic is down and foodservice options are everywhere. Our belief is that we are likely closer to a recession than we were a year ago, and this industry is an early indicator. RBI and its brands must focus on unit economics; get the formula right on food, service, and unit appearance before franchising and opening new units.”

One of RBI’s biggest strides has been in menu innovation. The company was earlier than some of its competitors in simplifying its menu and then bringing on new products—and it’s doing a better job at it, as well, Hottovy says.

“A hallmark of a lot of the successful restaurant chains in the last five years or so has been reducing the sheer number of menu items that are there, but still allowing for customization and personalization within that,” he says.

Powell says that while Burger King has been known in the past for gimmicks, the Impossible Whopper is not that. “It reaches non-users and lapsed users who had not had Burger King in their consideration set for some time,” he says.

Burger King is not the only RBI brand to add meatless options. In May 2019, Tim Hortons introduced three new vegetarian items made with the Beyond Meat Breakfast Sausage patty.

Long-time meat lovers will probably not be switching over to the brands’ veggie versions of burgers and sausage; the real win for the meatless options is that they cater to families and large parties by eliminating the veto vote. 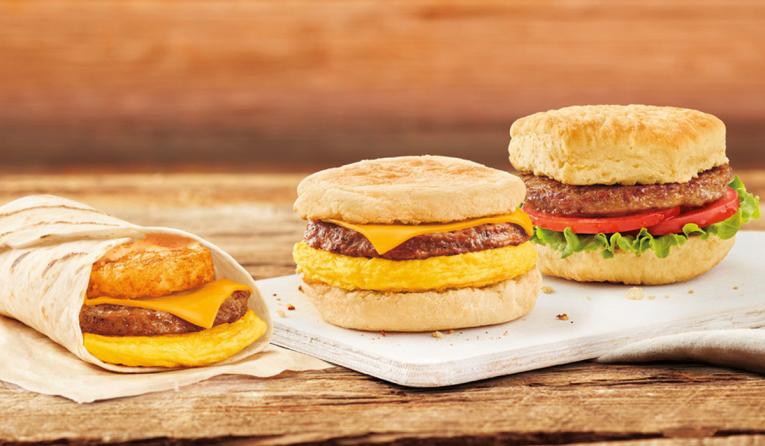 Even though Tim Hortons’ same-store sales decreased in 2018 over the previous year, the chain is in a good position.

The most important meal

Breakfast is one of the only product segments in the quick-service industry that continues to grow, but Burger King is under-penetrated compared with McDonald’s, Mizuho’s Scott says. Only 14 percent of the restaurant’s sales are in breakfast items, compared with 25 percent for McDonald’s, he says (though it’s worth noting McDonald’s serves breakfast all day, while Burger King does not).

Burger King is now trying to drive up that part of the business. For example, the company introduced limited-time double-meat breakfast sandwiches and cheesy bacon tots. But Powell says this innovation is more reactionary than anything. “McDonald’s now has cheesy bacon fries available nationwide, so it’s not surprising that Burger King would get in on the act,” he says. “RBI should leverage their knowledge of the breakfast category from Tim Hortons’ successes to better compete with McDonald’s, Starbucks, and Dunkin’ rather than be the ‘me too’ mover playing catch-up.”

Burger King is also investing in coffee. In March, the company rebranded its coffee platform from BK Joe to BK Café. That same month, it started offering a coffee subscription service where users who sign up on the app can enjoy a hot coffee every day for $5 per month. And in March 2019, Tim Hortons introduced its own program for breakfast lovers: After every seventh visit, guests can enjoy a free coffee, hot tea, or baked good (with the exception of Timbits and bagels). Five weeks later, about a fifth of Canada’s population had signed on.

When it comes to coffee, Scott points out, Burger King has an opportunity to profit from a soon-to-be-underserved market. Dunkin’ is moving upmarket with its coffee products, leaving room on the value end of the spectrum. This means Burger King could move into that space, complementing it with a lineup of breakfast sandwiches—such as the Croissant Breakfast Sandwich, which is the restaurant’s second-most popular entrée item.

To keep pace with the rest of the quick-serve industry, RBI has been working on mobile ordering, payment, and delivery, along with other off-premises business enhancements, for each of its core brands. For example, Burger King has been investing in outdoor menuboards, kiosks, and mobile pickup stations, and Popeyes went from zero restaurants that deliver in April 2018 to 1,300 restaurants that deliver as of this April.

“It’s all part of the process to link up the online/offline world that’s becoming increasingly disruptive with delivery,” Scott says. “They’re attaching it to new development agreements that they’re signing with franchises, so they can feel pretty confident that they’re going to get a lot of that upgrade pipeline filled in the next couple of years.”

Double drive thrus are another advancement Burger King is working on to compete in an industry where fast service is table stakes. The chain was already crowned the fastest drive-thru restaurant in the U.S. last year in QSR’s Drive-Thru Performance Study, and the double drive thrus and other enhancements, which were announced in late 2018, should boost the speed even more.

Seventy-nine percent of millennials say they spend money “eating at the hot restaurant in town,” according to a CNBC report, so it makes sense that the generation is greatly influencing quick serves’ marketing efforts. For the last two years, Cil has been hiring engineering students who are familiar with social media and creating apps, Powell says—and looking to young brands as examples to inspire RBI’s own branding.

Burger King’s unconventional advertising that pokes fun at its competitors is one example of how it’s marketing to a more youthful crowd. “I think they’ve gone after McDonald’s fairly specifically with a tongue-in-cheek approach,” Powell says.

Take the chain’s 2018 Whopper Detour stunt, where consumers who downloaded the upgraded Burger King app could buy a Whopper for just one penny—but they had to be within 600 feet of a McDonald’s to activate the offer. This initiative generated 1.5 million app downloads and a lot of press. And the latest marketing response to the Happy Meal is Burger King’s Real Meal, where customers can order a meal that matches their anything-but-happy mood, from “YAAS” to “DGAF.”

“That has turned out to be controversial, but it has brought attention to Burger King in a quirky manner,” Powell says. “But quirky marketing is hit or miss. While it might bring a lapsed user back for a promotion or LTO, it could also drive consumers toward McDonald’s, as the chain is top of mind during these marketing campaigns.”

Powell believes that while Burger King has made a solid effort at differentiation, it’s not a sustainable path for future promotions in the quick-service space. For example, it’s easy for competitors to undermine the advertising by scooping the chain on food or service. This does happen: When Burger King ran a commercial about how it’s the only major chain to offer spicy chicken nuggets, Wendy’s announced soon afterward that it’s bringing back that same menu item.

Overall, though, the menu experiments, stunt marketing, and technology improvements are just part of the foodservice business these days—and RBI is working to stay on top of the current of change. “This is a space that’s rapidly evolving, and right now, we’re undergoing a period of change in the [quick-serve] space that we haven’t really seen in several decades,” Hottovy says.