Employees will soon take orders in line as the java giant adjusts to a changing consumer.

With morning routines and habits in disarray, COVID-19’s impact on Starbucks has been towering.

Relative to pre-pandemic expectations, the chain has forfeited roughly $3.1 billion in sales, it revealed Tuesday. In just the third quarter, which ended June 28, same-store sales plunged 40 percent globally as traffic sliced in half, year-over-year, 51 percent. In the Americas, those figures dropped 41 and 53 percent, respectively. Starbucks’ revenues slid 38.4 percent to $4.2 billion.

Recent signs, however, suggest Starbucks’ recovery is well in motion, with CFO Pat Grismer targeting the end of Q2 2021, or March, for the company’s U.S. business to return to pre-virus levels, with margins lagging by two quarters.

Starbucks exited Q3 with 96 percent of its domestic stores open, up from 44 percent three months prior. Close to 30 percent of corporate units featured limited seating, which helped progress comps from a low point of negative 65 percent in mid-April to minus 15 percent at Q3’s close. Zeroing on the 3,100 U.S. restaurants open throughout the entire quarter, same-store sales upped from negative 14 percent in May to negative 1 percent in June before turning positive at 2 percent in July month-to-date.

Barring future setbacks, like a second wave, it’s clear COVID-19’s grip on Starbucks will eventually loosen. But it’s how the brand looks on the other side that will last.

CEO Kevin Johnson said Tuesday during a conference call Starbucks remains committed to creating safe, familiar, and convenient experiences. And getting there will rest on adapting the company’s portfolio to cater to evolving patterns of consumer behavior.

The effort is accelerating through multiple layers. One shared Tuesday hadn’t come up in previous updates. It concerned Starbucks’ drive thru, which, combined with mobile order-and-pay, accounted for nearly 90 percent of sales volume in Q3. It was roughly 60 percent before the crisis.

Johnson said Starbucks plans to introduce handheld devices to boost throughput and customer experience. The result being an operational scene similar to the one at Chick-fil-A, where “face-to-face” ordering expedites the process. Pre-COVID-19, this was taking place about 60 percent of the time at Chick-fil-A, with employees positioned outside to take orders from a tablet, even walking upstream from the speaker box to accept orders. The service enabled Chick-fil-A to greet guests as soon as they arrived and open more time in the back of the house to prepare orders, leading to higher quality and accuracy, and just addressing one of the lonely pain points of a crowded drive thru—waiting in line with no action in sight.

Johnson said stuffed drive thrus and speed of service have long weighed on Starbucks. Lines often snake around the building and into streets. Drinks are made to order and typically take multiple steps. “Where we deploy this handheld point-of-sale, we can now have a Starbucks partner out there taking orders walking through that line of cars, which is going to dramatically increase the throughput at drive thru,” Johnson said.

It’s going to let Starbucks “bust the line,” as the retailing saying goes. Simply, work up the line to take orders on mobile tablets faster than counter staff can operate a stationary terminal.

“And so, we're able to get out of the store, get out in that line, put an order and in a queue much faster, and get those out-the-window times down and get the beverage and food items to the customer much quicker,” COO Roz Brewer added.

Starbucks is also developing technology where the handheld can give guests the option, if the line gets too long, to walk into the café and pickup. The company didn't share a roll out timeline for the new system. 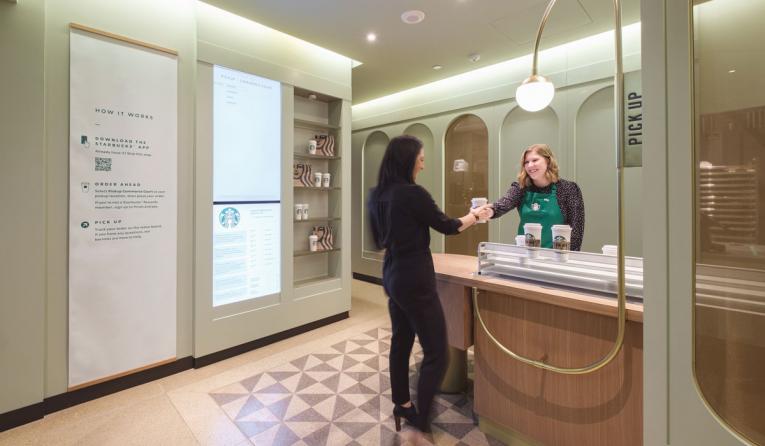 Starbucks Pickup locations will numbers in the hundreds within five years.

This drive-thru focus fits into Starbucks’ broader outline—grow comps and visits through efficiency and accessibility across COVID-19-ready channels.

And that’s where the definition is truly evolving for Starbucks.

The brand’s growth was historically defined by agile and blended formats, which is partly why Starbucks closed 2019 as the second-largest chain in the country at 14,825 locations (trailing Subway at 24,798). As of June 28, there were 15,243 Starbucks in the U.S.

Generally, this meant complementing traditional Starbucks stores, or the so-called “third-place experience,” with drive thru and mobile order pickup outlets to serve consumers’ need for convenience.

Now, in addition to the handheld devices, Starbucks will deploy a new curbside pickup experience across 700–1,000 locations by the end of Q3.

In urban core markets where drive thrus and curbside aren’t feasible, Starbucks plans to reposition store formats, Johnson said, to create a blend of traditional units with new “Starbucks Pickup” locations. These are smaller footprint venues that offer a walk-through experience relevant to guests in dense, urban trade areas. Each of these Starbucks Pickup stores will be (ideally) located within a three- to five-minute walk from typical Starbucks cafés, Johnson said. The company expects to accelerate the development of more than 50 of these over the next 12–18 months, with a view to have “several hundred” over the coming three to five years.

Curbside and drive thru, in particular, will be key to unlocking the mid-morning, early afternoon business that’s surged lately for Starbucks. It was coming on pre-virus, but received a jolt from changing preference.

Starbucks tested curbside in about 250 stores, Brewer said. The company built out the option with tech, where customers can access it from Starbucks’ app where available. “Trying to bring the lobby to door side,” Brewer said.

“Between handheld and curbside, we feel like we're going to be able to deliver a different customer service and it will unlock and enable some efficiencies that we need, and speed,” she added.

Beyond the contactless drive, these initiatives are critical for Starbucks given COVID-19’s proficiency to either expose or accentuate competitive strengths. Arguably the lead point for Starbucks in recent years has been its digital assets. In Q3, the brand witnessed significant acceleration in the number of users who downloaded Starbucks’ app and joined the rewards platform, totaling 3 million in the period—up 17 percent from Q2. Additionally, Johnson said, engagement with rewards customers outpaced non-loyalty users with year-over-year sales growth from the first turning positive in early July. As a result, Starbucks Rewards as a percentage of tender in Q3 rose 4 percentage points from a year ago to 46 percent, above the pre-virus trend.

Recently, Starbucks announced plans to update its loyalty program by giving members more payment options and ways to earn “Stars” though the app. Starting fall at corporate locations, guests will be able to pay with cash, credit/debit cards or select mobile wallets and earn Stars toward free items. The big change is they won’t be required to preload a Starbucks card within the app. 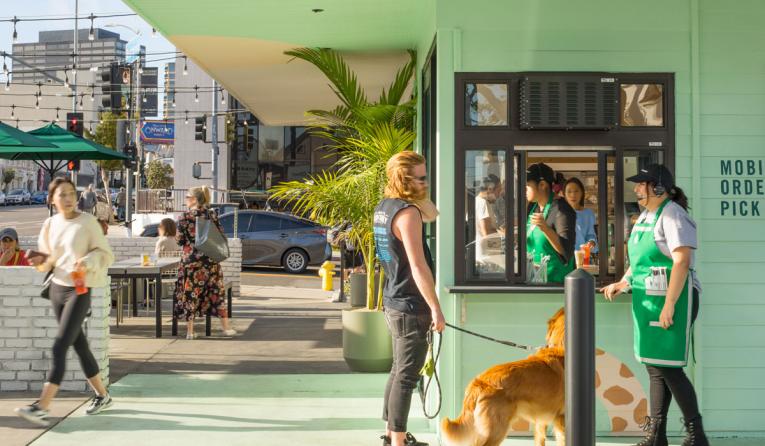 Pickup windows, curbside, Starbucks is bringing the lobby to the door wherever possible.

“It serves two purposes,” Brewer said. “One, to expand the funnel on the customer base. But we actually believe it will get even deeper penetration with our Starbucks Rewards members as well.”

“Knowing the era of sit-down coffee shops is on pause, a move toward more flexible payment terms—paired with the transition to locations better suited for mobile pick-up—is a step in the right direction for Starbucks to retain its share of the market and to open the door to an even wider range of customers,” Kate Hogenson, senior loyalty and CX consultant at Kobie, said in an email to QSR.

Near-term, disruption to weekday morning routines, especially commuting to work and school, is a headwind Starbucks must grapple with. Customer visits continue to shift from urban cafes to suburban drive thrus, and guests are purchasing multiple beverages and food items on a single order—dynamics that contributed to a 25 percent average ticket hike in Q3.

Once Starbucks started to reopen stores, it did so with mobile ordering included, entryway pickup, and in-store to-go orders. Ticket growth moderated and transaction volume increased in response.

Also, with national coverage in the U.S. ignited by COVID-19, Starbucks Delivers transactions tripled in Q3 from Q2 levels, with the highest volume coming late morning and mid-day.

“We feel like this new agility and resilience that we've built into the business will allow us to look at that morning daypart, adjust to the transitions we're seeing in mid-morning early afternoon and then bring in a new customer base, additional customer base with the new rewards program,” Brewer said.

Johnson brought up another change in Starbucks’ direction of late. The company launched an Impossible Breakfast Sandwich in June to join other plant-based options, namely on the milk side. A recent example includes Cold Brew with Cinnamon Almondmilk Foam. “Early results from these innovations are very encouraging. We are accelerating efforts to expand these offerings for our customers,” Johnson said.