As Third-Party Delivery Looks for Answers, Domino’s in ‘Good Spot’

The pizza chain will focus on what it does best, and 'let everything else shake out.'

Well before COVID-19, Domino’s spoke about third-party delivery and the inevitable “shakeout” to come. In 60 years, the brand has never made a dollar delivering pizza, CEO Ritch Allison said Thursday during a conference call. It makes its money on the product, not the delivery itself, although it does charge an upfront fee, market-by-market. But that’s more of an offset strategy than a profit driver.

“So we’re just not sure how others do it,” he said.

And as the marketplace seeks answers, Domino’s plans to sit in the stands and grab its popcorn. Yet has the idea ever come up? The sheer prevalence of third-party delivery led Domino’s to at least consider it in recent years. The lure of hopping on an aggregator platform to reach additional consumers.

This conversation has come under hot lights of late. The pandemic forced a lot of independents and small operators into the mix just to survive. Labor management platform 7shifts recently released a study on the state of restaurant labor regarding third-party delivery. It found the average fee paid to aggregator services in 2020 was 18.4 percent. However, 30 percent of restaurants said they paid 30 percent or higher.

Twenty-four percent of restaurants said their opinion of third-party delivery worsened during COVID, thanks to high fees. Seventeen percent said it improved because it helped keep the doors open.

And perhaps one of the more staggering changes—delivery-related roles being created within restaurants grew by 243 percent as operators scrambled to serve demand.

A lot of what’s unfolding in the third-party sector? Domino’s is pulling in the opposite direction. “In a world where we're trying to shrink our delivery area to get closer to our customer for better service, a lot of these third-parties are trying to expand to reach more customers, which we think just takes away from service,” Allison said, referencing Domino’s fortressing strategy, which looks to cluster markets, shrink territory for deliveries, and, in turn, improve the wage rate equation for drivers and franchisees, as well as bolster carryout business and service times.

“And when you think about the profit equation, you get somebody who inserts themselves into the value chain, and they have to make their money somewhere,” he added. “And it's either got to come from the restaurant or it has to come from the customer.”

Ultimately, Allison believes this reality is where the pressure will froth over, particularly with independents trying to make margins amid rising cost environments, while also paying aggregators.

Customers, he thinks, over time, will start to closely look at that delivery that cost them $15 for $12 worth of food.

“So we're just not sure how it all plays out. And you've seen that with some of some of the public players in that space who have commented about the challenge of driving long-term profitability as an aggregator,” Allison said.

But to Allison’s point, Grubhub’s massive user growth did not translate into profits. The company reported a net loss of $67.8 million in Q4—a significant increase from the $27.7 million net loss in Q4 2019. The company’s net revenue was $504 million.

One of the concerns Allison surfaced in the past was the notion of restaurants benefitting from the financial support of aggregators hell bent on buying market share. The fact they were pricing below the cost to serve, offering free delivery or other deep discounts often enabled by investor subsidy.

Grubhub spent $319 million last quarter on operations and infrastructure to handle the added COVID volume. It also pushed $120 million toward sales and marketing and lost north of $50 million due to delivery fee caps in certain markets. The end result being a nearly $68 million loss.

There’s no question demand will be there, though. A study highlighted in PYMNTS' December Mobile Order-Ahead Tracker noted digital orders would make up 54 percent of quick-service restaurant sales by 2025, a 70 percent increase over figures outlined in studies before COVID.

To PYNMT’s point, “the success of these delivery services depends on finding a fee that will be sustainable for restaurants and third parties alike.”

While nobody knows for certain if caps could be a reality of the future, they did bring up a key question: Can restaurants really afford 30 percent fees as it becomes a larger part of the business?

Eric Jaffe, co-founder and COO of ChowNow, explained the recent dynamic like this to PYNMTS: “Maybe [restaurants are] OK with paying those [third-party] commissions when 20 percent of your revenue comes through that channel, but when the model flips and suddenly 80 percent of your revenue is taxed by those commissions, your business model breaks.”

“For us, we continue to just be the low-cost delivery provider, provide great value,” Allison said. “And we think as long as we're providing a great product with great service at a great value, we'll let everything else shake out. And certainly, we don't know how long it will take to all shake out. But from our perspective, we're in a pretty good spot.” 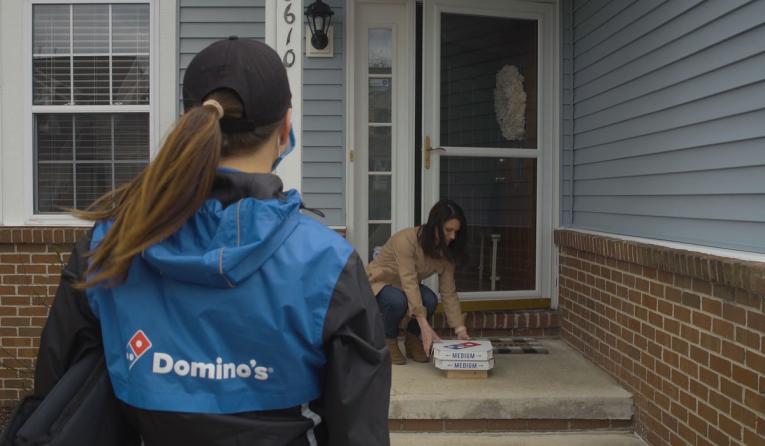 “As a lot of folks who have been paying a lot to have food delivered to their houses, as behaviors start to change, and other options open up, we're going to continue to have Domino's as the unquestioned value leader in the [quick-service restaurant] pizza segment," says Ritch Allison, Domino's CEO.

Carryout versus delivery, sales, and a look ahead

Domino’s opened 116 net U.S. stores in Q4 and 272 internationally. Remarkably, the brand has brought nearly 1,2000 new restaurants to market in the U.S. over the past five years, while closing fewer than 80.

This past year, Domino’s also surpassed $8 billion in U.S. retail sales for the first time.

Naturally, COVID provided its share of tailwinds for the pizza segment’s top player. Domino’s entered the year generating 70 percent of its sales through digital channels. It exited 2020 at 75 percent.

Yet there was a bit of tug-of-war going on. Although Domino’s felt a significant tailwind with its delivery business, there was a headwind on the carryout side.

Allison said fewer customers were comfortable getting out of their cars and walking into restaurants, which pressured order counts with carryout. Before COVID, carryout was one of the buzziest topics at Domino’s. It served as a crucial source of customer acquisition and order count growth.

What’s important to note, too, is Domino’s carryout customer is different than its delivery one. This past year didn’t simply see a shift from one to the other with the same customer base. Delivery increased, while carryout headed in the other direction.

In fact, pre-virus, only roughly 15 percent of Domino’s customers used both delivery and carryout. Meanwhile, the company took its carryout mix to about 45 percent of orders.

Domino’s generally reports lower tickets on carryout compared to delivery, but there’s a lot less labor cost in tow. So the higher the average hourly labor rate gets in the market, the more the profitability equation tilts toward carryout orders.

Given everything that’s happening these days from a wage perspective, it’s no surprise Domino’s plans to circle carryout as one of its lead 2021 drivers. Not to mention, the brand will start lapping some of its delivery tailwinds as dine-in returns across America.

“We're not looking at it so much as a shift from one or the other as it is a reemergence or kind of gaining back some of those carryout customers that have been on the sideline,” CFO Stu Levy said.

Another lever at work is Domino’s Carside Delivery, which didn’t exist at the start of the year but is now fully rolled out.

Long haul, Allison believes the system will help Domino’s compete against the drive thru—only 10 percent or so of its footprint boasts windows currently. “Our aspiration here, which is well within reach, is that we get to a point where you can get a carside delivery at Domino's faster than you can wait in line at a [quick-service restaurant] drive-thru to get your food through the window,” he said.

Domino’s also now has 27 million active members in its Piece of the Pie Rewards program, which grew, year-over-year, without any aggressive week-long promotions across the last three quarters of 2020.

“While we certainly brought new customers into the brand over the last year, the story of 2020 was more about the frequency and loyalty of our existing customer base. Our customers ordered more often,” Allison said. “And when they did, they also ordered more items. And we saw that specifically among our loyalty program members.”

Value will be a big focus as well.

“As a lot of folks who have been paying a lot to have food delivered to their houses, as behaviors start to change, and other options open up, we're going to continue to have Domino's as the unquestioned value leader in the [quick-service restaurant] pizza segment,” Allison said. “And frankly, broadly across the restaurant industry, when you think about what it costs to have food delivered to feed a family of four, we really like our positioning in that space.”