If Wendy's is going to add a plant-based burger, it can't bottleneck back-of-the-house operations.

Next up in the plant-based protein rush? It might just be Wendy’s. Chief executive officer Todd Penegor didn’t reject the possibility during Wednesday’s second-quarter review. You could argue he did the opposite. “We would want to do it the ‘Wendy’s Way,’” he said, “something that’s unique to Wendy’s, something that’s not overly complex in our restaurants, but something that really hits for the consumer with the appropriate nutritional profile and something the consumers are delighted with, but our operators are equally happy with.”

This kicker from Penegor, though, might have been the bigger hint. “We’ll continue to look, and our culinary team continues to look, at various options. And it’s probably something that we’ll need to look at, and we’ll look at into the future,” he said.

On August 1, Burger King launched its Impossible Whopper nationwide with a $7 deal that comes with the original, and lets customers taste test for themselves. Tuesday, Subway said it’s bringing a Beyond Meatball Marinara sub to nearly 700 restaurants in the fall. And a crop of other brands, from White Castle to Qdoba, have already joined the movement.

"Clearly, there's growth out there in plant-based proteins," Penegor said. "And we believe it is a trend that will be here to stay. ... It's still a small portion of the overall servings in the restaurant space, but we know it is growing."

“Folks are looking for options and we talk a lot about the flexitarian consumer today,” he added. “We’re taking a hard look at what the options would be for us in the restaurant.”

Wendy’s tested a black bean burger back in 2016 but discontinued it by July 2017. Penegor said it moved well in some markets, but not in others. It was also operationally complex.

A big differentiator with plant-based proteins, like Beyond and Impossible, is they attract meat eaters as much as vegetarians. They index heavy with customers looking to trial something different. Options like the black burger gear more toward dietary-driven guests.

As Burger King North America president Chris Finazzo said in a release announcing the Impossible rollout, “Since we first launched our market tests in St. Louis in April, and later in six other markets across the country, we’ve heard great feedback and know the Impossible Whopper appeals to both current guests who are already big fans of the Whopper sandwich, as well as new guests who are excited about this new option.”

Would the same be true if Burger King was talking about a vegetarian option? More likely, the fast-food customer ordering the Whopper and the one picking a black bean burger would be two very different guests. It might be too early to tout how the plant-based protein customer really behaves. Whether they try the option and then switch for good, go back to the original, or swap between the two. Or if its real benefit is in incremental, light users, and being a veto eraser.

Recent data from The NPD Group, released in July, said there were 228 million servings of plant-based burgers ordered at quick-serves in the year ending May—up 10 percent from a year ago. The increased availability created trial on the part of beef burgers buyers, NPD added. Beef burger buyers, who purchased typical options at quick-serves an average of 18 times in the year ending April, did give plant-based burgers a try, purchasing them at counter-service restaurants two times in the period. Another way to look at it is that 95 percent of plant-based buyers have made a beef burger purchase within the past year, according to NPD’s receipt harvesting serving, Checkout.

Meanwhile, although vegetarians and vegans are contributing to the growth in plant-based, they still represent a single-digit percentage of the U.S. population and aren’t the primary contributors. A larger percentage of the overall adult population (18 percent), are trying to get more plant-based foods into their diets, per NPD’s Health Aspirations and Behavioral Tracker.

“Plant-based burgers allow consumers to substitute without sacrifice. They get the ‘burger’ experience while assuaging their need for more protein and social concerns,” Darren Seifer, NPD food and beverage industry analyst said in a statement at the time. “With that said, U.S. consumers have not given up on beef burgers but are willing to mix things up every now and them.”

Like Wendy’s, White Castle afforded heavy attention to the process itself. Typically, it “sets the grill,” by putting down a bed of onions and placing the beef on top. The Impossible Slider, however, is mashed down on the grill already formed. The key, Richardson said, was getting the burger pre-portioned versus doing so in-house.

It didn’t hurt the product drew 100 million media impressions at launch, with celebrities like Katy Perry taking to social media.

It’s safe to assume Wendy’s and its Twitter account would run with a plant-based launch. To Penegor’s point, though, and observing White Castle’s experience, finding a product that fits its personality and operational focus would be key. Mainly, an iteration that doesn’t slow down service times—an essential and ongoing effort from Wendy’s to battle for share among its competitive set.

It seems a decent bet we’ll find out what this looks like eventually. 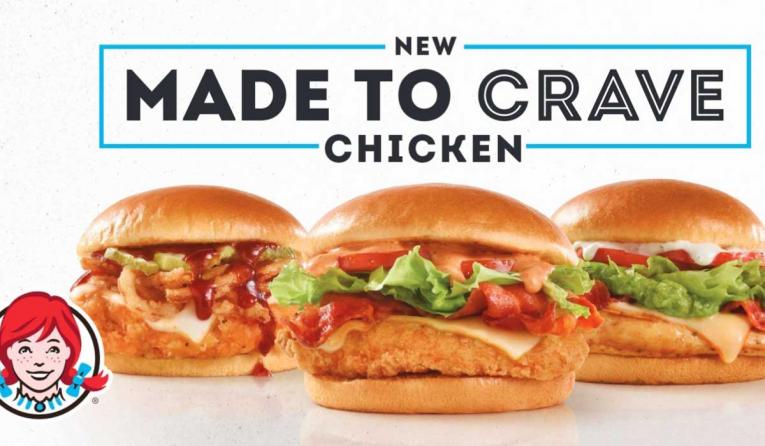 Wendy's Made to Crave lineup has helped balance its value offerings.

Wendy’s stock jumped north of 8 percent by late Wednesday following a solid report. The company earned 18 cents per share, a penny ahead of expectations, on revenue of $435.3 million. Same-store sales climbed 1.4 percent, year-over-year, versus 2018’s Q2 comp of 1.9 percent.

Building off last quarter, Wendy’s found success with its Made to Crave and Biggie Bag platforms. The chain pushed these value constructs in favor of price-point promotions in recent quarters. It allows Wendy’s to pulse new innovation and build frequency off brand-focused deals instead of constantly trying to drive traffic with fleeting LTOs and items that tack on complexity.

Wendy’s calls its mix strategy “one more visit, one more dollar,” which boils down to balancing transaction-driving value with top-tier products customers are willing to trade up to.

How it’s evolved lately, Penegor said, is Wendy’s is luring guests with affordable offers, like its famed 4 for $4. And now, the same is true of the $5 Biggie Bag. But the chain needs to make sure it’s getting products and price points right in that $4 and under a la carte section.

“We’ll continue to test and learn and make sure that we have the balance right,” he said. “Because we do see some additional growth out there and we want to make sure we achieved some of that growth but do so in a healthy fashion between a nice balance on check and mix.” Items not just to bring customers in to Wendys’s, but to bring them in more often.

“One more visit, one more dollar,” is another way to describe a high-low strategy, and it’s important to make sure those a la carte value items satisfy the strategy, he said.

“Those worked well,” Penegor said of the 4 for $4 and Biggie Bag. “But it hasn't traded down significantly from the premium offerings and with the news that we continue to have around, Made to Crave on hamburgers and chicken, I think we got that balance right. We got to make sure we've got the a la carte value also balanced appropriately to moving forward.”

“We have to stay consistent with some of that messaging because awareness still is quite low that Wendy’s actually delivers food." — Wendy's CEO Todd Penegor.

Made to Crave is the more premium element for Wendy’s, with options like the S'Awesome Bacon Cheeseburger, running roughly $5.29. The Biggie Bag has been a check builder as well as an incremental traffic driver. It encourages trade-up from consumers as well, Penegor said. And both platforms, as Wendy’s recent chicken additions prove, give the chain a chance to innovate around branding more than current offerings, and toss new options into the mix.

At the end of Q2, more than 80 percent of Wendy’s North America restaurants were on a delivery platform. Additionally, the company is working to integrate the service into its mobile app by the end of the year, “which will improve our user experience and delivery times,” Penegor said.

Mobile ordering is activated in 90-plus percent of Wendy’s U.S. locations. That should complete by 2020.

With the systems humming, Penegor said, the unlock to success with delivery and mobile ordering now lies in increasing customer awareness and driving trial. “We have a robust playbook of promotions slated for the remainder of 2019 to build our digital awareness and ultimately drive accelerated same-restaurant sales,” he said.

Penegor added that Wendy’s marketed its delivery capabilities more in spurts than consistent packages to date. DoorDash supported with free promotions and placement, but national advertising remains an internal discussion. “Especially as we get into some of the big sporting events that you can have your food delivered,” he said.

“We have to stay consistent with some of that messaging because awareness still is quite low that Wendy’s actually delivers food,” he added. “[It will need] to be a combination of Wendy’s messaging and DoorDash messaging.”

Wendy’s is driving customers into its digital platforms with deals, too. Currently, guests earn a free Bacon Junior Cheeseburger on their first mobile order. “We're going to have to continue to drive back app acquisition through offers,” he said. “… It’s going to be part of how we create a great consumer base. It wasn’t material drag last year. It won’t be a material drag this year. It’s going to be part of the toolbox of things that we’re going to continue to do to get folks comfortable with using our digital properties moving forward.”

21 Main Street, Suite 204
Hackensack
NJ
203-883-6060
SH Franchise Finance is an independent finance company, so we know what it is like (more)
Windows