The McDonald's of the Future is Coming Fast

Additionally, McDonald’s revenue of $5.37 billion, while down 7 percent year-over-year due to the company’s refranchising initiative, beat Wall Street’s consensus estimate of $5.32 billion.

What Ozan was referring to, however, was McDonald’s ongoing battle to reignite positive guest counts in the U.S., and the broad, yet quickly arriving goal to bring Experience of the Future remodels to restaurants across the country.

Guest counts declined during Q3 stateside, although McDonald’s wouldn’t say by how much exactly. Unpacking the reason behind this is a multi-tiered conversation, but McDonald’s can’t be accused of sitting pat on the issue. Let’s examine some of the changes Ozan and CEO Steve Easterbook broke down Tuesday in regards to accelerating McDonald’s U.S. business.

What drove the comps growth?

A higher average check was the culprit for McDonald’s sales lift. As is the case with most things for McDonald’s, it’s not as simple as a straight price increase, which was up about 2 percent in Q3, year-over-year. Easterbook said product mix shifts, including the new Glazed Buttermilk Crispy Tenders and 100 percent fresh-beef Quarter Pounders, pushed the figure up. So did the addition of self-ordering kiosks and delivery. Easterbrook said kiosks, a staple of the Experience of the Future redesign, are generating higher checks because guests “can dwell longer.” They don’t feel rushed by a cashier waiting on their order. And delivery, which sees a guest-to-interface interaction as well, is pushing orders between one-and-half and two times higher than normal, Easterbrook said.

Yet, McDonald’s doesn’t want to make this growth story about average check. “This is about getting the guest count moving and if we can get both of those alongside each other,” he said. 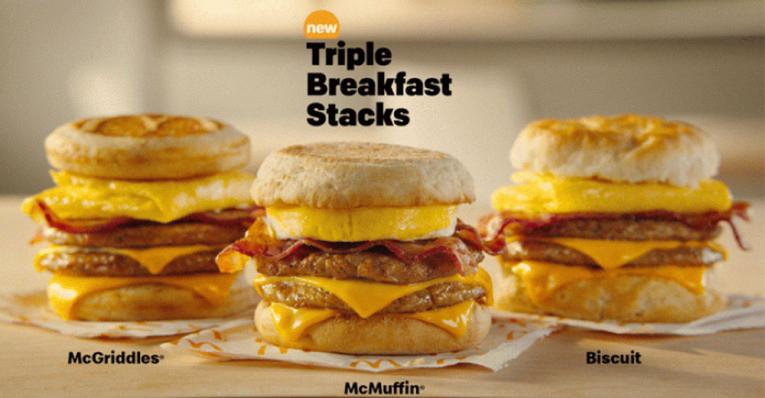 Breakfast, which represents about 25 percent of McDonald's business, remains a challenge. But new Triple Breakfast Stacks are coming.

McDonald’s hasn’t been shy about expressing its issues with breakfast business. The segment represents roughly 25 percent of its sales and has struggled from a daypart stance in recent quarters. Essentially, McDonald’s has sold breakfast products, it just hasn’t sold enough of them during breakfast hours.

In September, McDonald’s expanded its $1 $2 $3 menu offerings with any size coffee for a $1 and adapted two customer favorite breakfast sandwiches at the $1 price point. And something new is coming, Ozan said.

“Soon we'll introduce new breakfast menu items inspired by our customers. A combination of national value, a return to local breakfast deals in new food offerings, the vision is up to win back customers at breakfast,” he said.

Shortly after the call, McDonald's unveiled that fresh breakfast item: Triple Breakfast Stacks—McDonald's first new breakfast sandwiches available nationally since the Egg White Delight McMuffin in 2013. They come with two slices of American cheese between two hot sausage patties, McDonald's said, and topped with Applewood smoked bacon and an egg. Guests can opt for their choice of a toasted McMuffin, buttery and flaky biscuit, or McGriddles cakes. The item is set to hit stores November 1.

"People have been hacking our menu for years—so much so that it’s inspired our new Triple Breakfast Stacks,” McDonald's manager of culinary innovation chef Mike Haracz said. “We love seeing the fun ways our customers and McDonald’s crew have been creating their own takes on our classics."

Added vice president of menu innovation Linda VanGosen: "Our customers have also told us they have been craving a bigger, more filling sandwich option in the mornings. Triple Breakfast Stacks are the latest customer-led menu innovation, and we are proud to share them nationally for a limited time as part of our continued journey to build a better McDonald’s.”

In an effort to regain breakfast share, McDonald’s shifted some of its spend to regional. It’s also letting local co-ops choose which items and what deals are best suited for their markets.

“It continues to be a battleground,” Easterbrook said.

‘The largest construction project in our history’

It is pretty eye-opening how quickly McDonald’s is updating its system to the Experience of the Future designs. The U.S. completed about 1,000 projects in Q3. By the end of 2019, Easterbrook said, McDonald’s expects to complete more than 12,000 restaurants, which would undoubtedly make this the largest construction project McDonald’s has ever undertaken, as the CEO put it.

In 2018 alone, McDonald’s transformed north of 3,000 restaurants and expects to surpass its original target of 4,000 projects, Ozan said. As for how these are performing, and if they’re matching the $6 billion price tag, Easterbrook said, “We are seeing an encouraging response from customers in restaurants where many of these improvements are already completed. This is in line with our experience in other McDonald's markets such as Canada, the U.K., and Italy executed programs several years ago that was similar to the one that U.S. is undertaking now.” There are self-order kiosks in more than 15,000 McDonald’s worldwide.

To glimpse into the future, as McDonald’s hopes to see it, consider that in France, Italy, and Spain, more than half of all international visits are transacted through the kiosk. 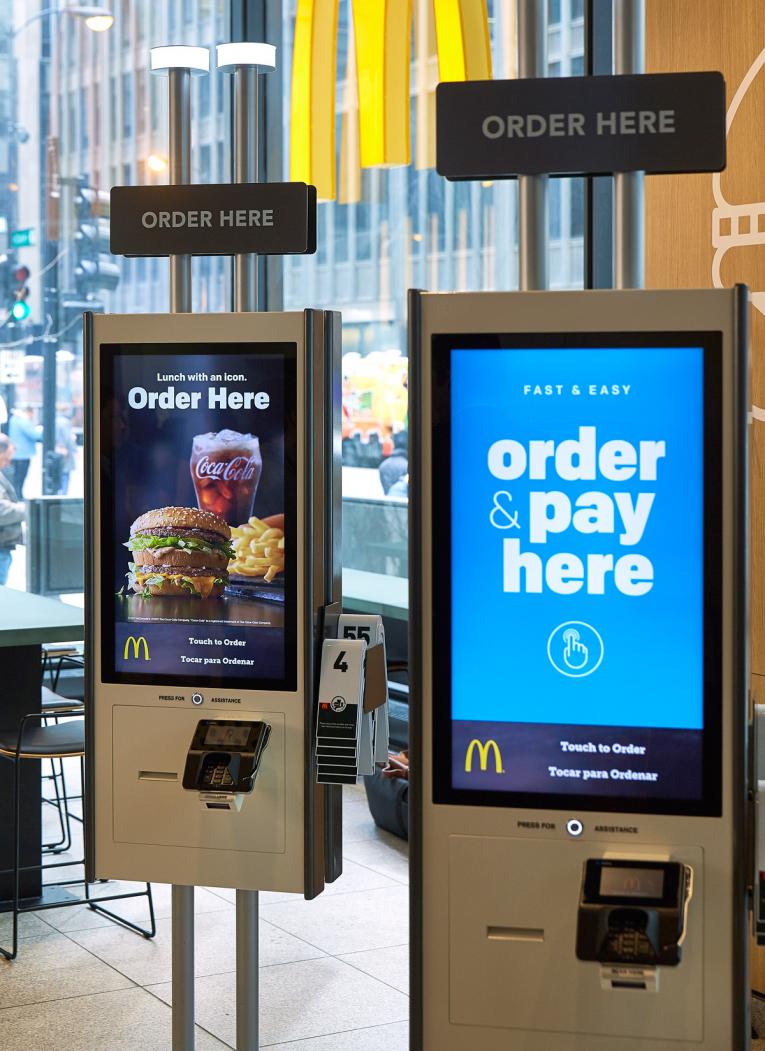 McDonald's kiosks are improving guest satisfaction, lifting check averages, and allowing the chain to improve the customer journey in other areas of the restaurant.

Easterbrook added that the design allows McDonald’s to improve its customer journey on several fronts, from table service to “guest experience leaders” who serve in the front of the restaurants, and digital menu boards.

What are the setbacks?

Beyond the construction costs and other financial burdens up front (McDonald’s expects to spend about $2.5 billion in capital this year), Ozan said restaurants have experienced a little longer downtime than expected. This sagged sales and guest counts. “The downtime in our restaurants ranges from partial, for example, when the drive thru remains open but the lobby is closed for remodel, to full when a restaurant has a large-scale project and the restaurant completely closes for a short period of time,” Ozan said. “The sales and guest counts recovery period after we complete a project have also been a little inconsistent. So we've put processes in place to execute strong grand reopening plans after construction that involve our local communities.”

The restaurants converting to the EOTF model are experiencing a temporary decline in labor productivity as well, due in part to a combination of lower guest counts and the restaurant paying crew during construction downtime. Easterbrook said McDonald’s expects this pressure to dissipate in mid-2019.

So far, the initiative hit year-to-date comps roughly 0.5 percent, Ozan said. In addition to the downtime issues, there’s recovery time and how long it takes McDonald’s to get back to the kind of volumes “that we were at plus less than we expect and then net of that is obviously the sales lists we're getting,” Ozan said.

Overall, however, McDonald’s is seeing the sales lift it expected, Easterbrook noted, when completed.

“There is actually an absolute, crystal clear correlation at most sales and guest count level and customer satisfaction level, but literally as you step up the initiatives whether it's going to be EOTF or those table service or those delivery with its outdoor menu boards for example,” Easterbrook said. “As you step up the number of initiatives, the restaurants adopt, sales set up nicely with as do guest counts and customer satisfaction.”

Slow down, no problem?

While service times have slowed—something that could be credited to a number of factors, including the EOTF design—customer satisfaction improved, Easterbrook said. At an average of 273.29 seconds, McDonald’s was the slowest drive thru studied in QSR’s annual Drive-Thru Study this year. That was 34 seconds slower than the prior year. The company isn’t exactly OK with the reality, though, even if guests seem satisfied overall.

“Now we don't just want to rely on that, but it's interesting that as we have enhanced the broader experience we do see customer satisfaction was improved, but we also know that speed is a fundamental part of our DNA,” Easterbrook said.

He pointed to top-line driving initiatives, like all-day breakfast and fresh beef, for adding complexity into the restaurants. “I know in particular with the drive thru that is a focus between our leadership and operator leadership, and the team has been established to make a meaningful headway into that,” Easterbrook said. He added it’s less of an issue in-store since kiosks promote unhurried ordering.

The digital boom isn’t close to over

McDonald’s delivery rollout was all the rage before EOTF jumped into hyperspace. Yet the accelerator is no less aggressive. McDonald’s currently offers delivery from more than 15,000 restaurants. It expects to reach thousands more by the end of the year, Easterbrook said, including a total of 9,000 in the U.S. In the U.K., Australia, and France, delivery represents as much as 10 percent of sales in restaurants that offer the platform. “With over 37,000 restaurants, we have a massive global footprint,” Easterbrook said. “We provide a distinct advantage by having places closer to more customers than any of our competitors.”

“This structure will ensure we provide the right level of support that contribute to the success of our development licensees and other franchisees,” Easterbrook said. “It would also continue to enable us to share and scale our best solutions across our international markets.

It has been just about a full year since a transaction created McDonald’s largest development licensee, a partnership that operates and manages the company’s businesses in mainland China and Hong Kong. The ambitious expansion calls for at least 2,00 new restaurants over five years, Easterbook said. This year, 375 slated to open with more than 400 in 2019. Seventy-five percent are being remodeled to the EOTF design. McDonalds has seen 50 million app downloads in China as well, “therefore building some rich database of customer behaviors and on the same approaches pattern. But also encouraging just the interaction with our partners like a good long term perspective,” Easterbrook said.