Where will the turnaround begin? Look to the drive thru.
Finance | February 2020 | Ben Coley

Tim Hortons has made management changes as well.

In past months, Restaurant Brands International CEO José Cil has spent more than half of his days focused on triggering a Tim Hortons turnaround in Canada.

Among the decades-old brewing technology, outdated drive thru, unfocused LTOs, and less-than-stellar food sales, Cil has seen a significant opportunity to close what he described as a “sizeable gap” between the brand’s recent performance and its capability.

The 56-year-old chain saw same-store sales drop 1.5 percent in 2019 (4,932 total units) and 4.3 percent in Q4. That’s down from an increase of 0.6 percent and 1.9 percent in 2018, respectively. In Canada (4,014 locations), annual same-store sales dropped 1.4 percent and Q4 comps slid 4.6 percent—a figure driven by investment in the rewards program and a weakness in lunch food, primarily the sandwich and wrap category. In 2018, Canadian comp sales increased 0.9 percent year-over-year, and rose 2.2 percent in Q4. The chain did see a 1.4 percent growth in Canadian restaurants in 2019, and 1.8 percent growth overall.

Cil and Axel Schwan, the recently appointed president of Tim Hortons, have developed strategies to turn the tide in 2020. The plan—which doesn’t require a clever name, according to Cil—focuses on elevating the quality of the brand’s core values, innovating for growth, and continuing to invest in modernization.

“The team has spent months dissecting every part of the business, conducting extensive new research, spending considerable time with our restaurant owners, identifying the underlying causes of our weak performance, and zeroing in on the large areas of opportunity to drive sustained long-term improvements in the business,” Cil said during RBI’s fourth-quarter and annual review. The company also operates Burger King and Popeyes. “After several months of hard work, our team has emerged with a clear view of what we need to do to accelerate growth and profitability for our owners and for the brand.” 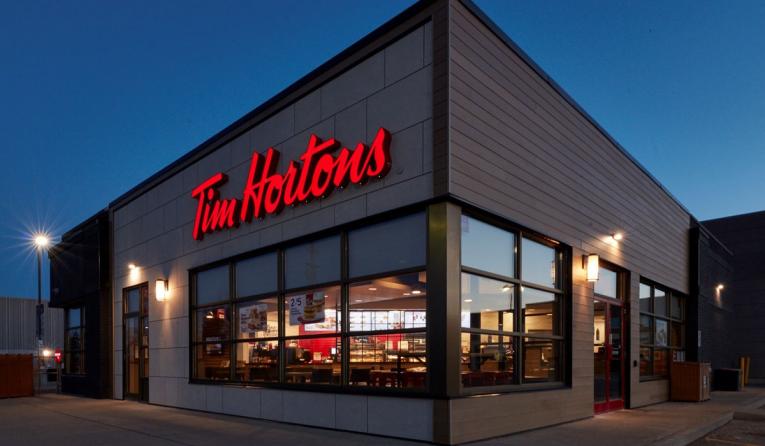 Much of that “clear view” Cil referred to relates to technological enhancements.

Cil acknowledged Tim Hortons has fallen behind in the industry when it comes to brewing technology. In response, the company started to introduce fresh brewers and water filtration systems at each Canadian unit, a process that will accelerate this year. The new technology is in place at more than 2,000 stores and has received positive feedback from customers, Cil noted.

Similar to the brewing technology, Cil said the brand’s drive thru—featured at more than 2,600 locations across Canada—is not up to par. Based off data showing drive-thru growth outpacing the front counter, Tim Hortons plans to install outdoor digital menus at most locations via an investment of $100 million (in Canadian dollars) from the Tim Hortons Canada Ad Fund. Cil said that with digital boards, the brand will save millions on printed menus, and offerings can be tailored to location, time of day, and weather. The installation will take place in the next year to year and a half. The digital boards are at more than 100 stores right now, and operators have reported better sales and speed of service.

Like many other chains, Tim Hortons is also tweaking its rewards program to promote more customer engagement. The brand is approaching it in two phases. The first phase, which included a free coffee or baked good after seven visits—brought in 7.5 million active loyalty members and a registration rate of 25 percent. The second phase will utilize more of the menu and personalized offers based on purchase history. It will shift from a visits incentive to a points incentive where customers can redeem points after a number of purchases. In addition to the revamped rewards program, Cil announced Tim Hortons will update the Roll Up the Rim program to drive digital activation and guest registration.

“We expect that loyalty will continue to be a drag on sales for the coming several quarters as we convert loyalty guests to registered loyalty guests and start deploying incremental offers at scale,” Cil said. “We'll be delivering a more personalized experience to our guests that should bring more benefits and generate incremental sales in the latter part of 2020 and beyond.”

Alongside the boosted technology, the brand will incorporate changes to its menu. Tim Hortons will begin offering non-dairy alternatives, upgrade the taste, texture, and quality of the bacon in its Bacon Breakfast Sandwich, and improve the bread carriers for its breakfast sandwiches. Customers should also expect an updated flavor for the chain’s iced coffee, as the chain has developed a new method of preparation that is scheduled to roll out soon.

"We have not performed to expectations and have not properly put the strength of the Tim Hortons brand to work," says Restaurant Brands International CEO Jose Cil.

As far as the company’s approach to innovation, Cil said he isn’t sure what the right number of LTOs is, but it’s certainly not 60 in one year. That 2019 figure was three times the amount of 2017, and the CEO said it led to cluttered menus, diluted marketing communications, and incongruence with the brand’s core categories. In the future, Cil said innovation will look more like the introduction of Dream Donuts, which tested well and fit easily alongside other baked goods. Three flavors of Dream Donuts spread nationally in January, and thus far, the item has seen promising sales.

Each of the adjustments will happen under the umbrella of what Cil called “meaningful changes” to leadership. Along with Schwan’s promotion to president, Tim Hortons hired Hope Bagozzi in January as its chief sales and marketing officer and appointed other industry veterans to lead development, restaurant technology, and communication efforts.

Cil has traveled to multiple Canadian cities in recent weeks with the leadership team, meeting with more than 1,000 restaurant owners to open a dialogue about profitability, priorities, and commitment.

The CEO noted that all the owners shared his sense of urgency to reignite Tim Hortons.

“In Canada, Tim Hortons continues to have one of the strongest market positions in all of [quick service] globally and some of the industry's best unit economics, but we cannot be complacent,” Cil said. “We have not performed to expectations and have not properly put the strength of the Tim Hortons brand to work. Despite our recent results, we have a clear plan and believe it's within our control to restore Tim Hortons to growth in Canada. To do so, we will embody the brand's founding values and execute on each of our principles around elevating core quality, innovating for growth, and modernizing the brand.”

How Shake Shack Plans to Win the ‘Delivery Wars’
How Inflation, Economic Pressures Will Impact 2023 for Restaurants
Can a Reusables Vendor Disrupt the Packaging Industry?

Clean Juice, Tim Tebow, and the Start of Purpose-Driven Growth
Rising Beverage Chain Swig Sold to the Larry H. Miller Companies
Can the Labor Shortage Bring Out the Best in Restaurants?