At Kahala Brands, it's 28 Brands, One Unified Mission

Under the roof of a nondescript brick two-story building in Scottsdale, Arizona, sits the nerve center of an atypical restaurant enterprise. Some 250 employees covering areas like digital marketing, culinary, legal, and construction hustle about with a unified, single-minded purpose: to support the growth of 28 quick-service concepts.

From its simple smoothie-and-juice-shack origins, Kahala Brands has become one of the restaurant industry’s foremost power players. With recognized names like Cold Stone Creamery, Pinkberry, and Blimpie under its charge, Kahala oversees more than 3,200 restaurant locations today, touching every state in the union save Vermont and every major culinary category—burgers, pizza, sandwiches, snacks, Mexican, and chicken among them.

In a world in which many companies remain quite content to develop one franchised concept, convinced that effort presents enough challenges, Kahala’s evolution into a 28-brand quick-service collective stands an especially daring and unique outlier.

“We’re not the norm,” says John Wuycheck, senior vice president of development, “and we’re OK with that.”

A triathlete who favored concocting his own power-packed beverages, Kevin Blackwell opened a smoothie and juice bar near his Phoenix-area home in 1981. Over the subsequent decades, Blackwell developed his flagship concept, Surf City Squeeze, into a 100-unit chain, while his hard-charging entrepreneurial ethos led him to scoop up smaller quick-service concepts like TacoTime, Great Steak & Potato Company, and Samurai Sam’s Teriyaki Grill. Blackwell named his growing franchise conglomerate Kahala Brands, a nod to a favorite Hawaiian beach.

By 2006, Kahala held nine brands and about 900 units. The company’s 2006 acquisition of the 1,600-store Blimpie sandwich chain, followed by the 2007 purchase of Cold Stone Creamery’s 1,400-unit system, pushed Kahala into the ranks of the industry’s mega-players as far as scale.

Though Kahala would reach some 4,600 restaurants and a reported $1.1 billion in sales, some franchisees found the resulting entity too large, unwieldy, and corporate. Some of its brands, including Blimpie and Cold Stone, began to falter, litigation with franchisees escalated, and the company’s financials struggled, especially amid the national recession.

The Serruya family, the clan behind Canada’s Yogen Früz chain, scooped Kahala up at auction in 2013, eager to set the multi-brand enterprise on a more sustainable path by working to strengthen its franchise business model. New leadership filtered into Kahala headquarters, and solidifying relationships with franchise partners emerged as a top priority. Kahala wanted its franchisees to be in the business for themselves, but not by themselves, says Wuycheck, who joined Kahala in early 2015.

“That’s a piece you have to get right,” Wuycheck says of franchise relations. 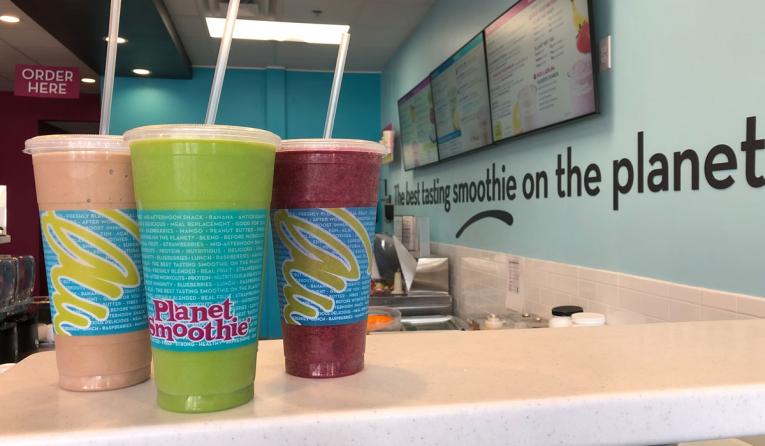 At the time of Kahala’s acquisition in 2015, Planet Smoothie had fewer than 100 units, most confined to the southeastern U.S. Today, the brand boasts 140 units and has entered new markets in the Mid-Atlantic and West Coast.

As Kahala gained stability, it returned to acquisition mode, bringing in the likes of Maui Wowi, Planet Smoothie, Pinkberry, and Baja Fresh throughout 2015 and 2016.

All potential deals—then as now—follow a straightforward formula. Quality food is a non-negotiable, Wuycheck says. Thereafter, Kahala leadership assesses other key pieces of the operation, including concept ambiance, perceived value, and customer following. Brands with some experience franchising are also preferred.

“With the exception of the food, the brand doesn’t have to be perfect when we acquire it,” Wuycheck says. “We believe we can tweak things accordingly and get the brand where it needs to be.”

Whereas some Kahala-acquired concepts immediately add new stores or new products, others require more finesse before pulling the growth lever. There might be new leadership to incorporate, supply chain issues to untangle, or a go-to market strategy in need of refinement.

“Every acquisition is a bit different,” Wuycheck says.

What’s not different, however, is Kahala’s immediate post-acquisition focus with any newly inherited brand and crop of franchisees: communicate excitement, clearly articulate plans, and meet with each franchise partner face to face.

“That’s the starting point,” Wuycheck says, “but then it’s up to us to continue to show we’re making improvements. Over time, it’s those actions that are the most important.”

Kahala’s efforts have only intensified under a new ownership group.

In 2016, Quebec-based MTY Food Group, one of the largest restaurant franchisors in Canada, acquired Kahala. MTY chairman Stanley Ma called the deal, which created a combined entity with approximately 5,500 restaurant locations, “a turning point in MTY’s history,” celebrating it as a pathway for MTY to grow its U.S. and international footprint (the company also acquired Papa Murphy’s earlier this year).

From the Kahala side, MTY’s presence injects more franchising experience, strategic synergies, and quick-service brands into the Kahala orbit—all of it fuel to the company’s recent resurgence.

“We’re all learning from each other, whether that’s about the best vendors to use, best practices, or how to ensure healthy franchisee relations, and that’s made us more excited than ever about where we’re headed,” Wuycheck says.

When Kahala acquired Baja Fresh in 2016, the 162-unit brand—once under Wendy’s charge—was well positioned for growth, yet lacked the important infrastructure to mature at scale.

“We had a reimaging project underway and had convenience factors like online ordering and third-party delivery in motion, but needed improved systems,” recalls brand leader Tim Koch. Koch began working with Baja Fresh 12 years ago and remained with the brand through the acquisitions.

He calls Kahala’s presence “immensely beneficial.” Kahala helped Baja Fresh research and then roll out a new point-of-sale solution across its system, introduced incentives to push the brand’s reimaging project with franchisees, and negotiated rates with third-party delivery agents.

“Since Kahala entered the picture, they’ve looked at our strategic initiatives and actively looked for ways to help support our execution,” Koch says. “With Kahala’s scale, we’re able to do a much stronger job identifying solutions and moving toward decisions that give us a solid foundation to build upon.”

Whether it’s Cold Stone, the largest brand under the Kahala banner, or the one-unit Cereality concept, Kahala’s shared service support model provides brand leaders as well as individual franchisees access to performance-driving resources. There is, for example, a culinary R&D team featuring chefs dedicated to both sweet and savory menu items; a legal team prepared to help with Franchise Disclosure Documents, trademark, and intellectual property; a digital marketing team focused exclusively on social media; a creative team charged to help with advertisements, promotions, and coupons; and a full-service construction team. 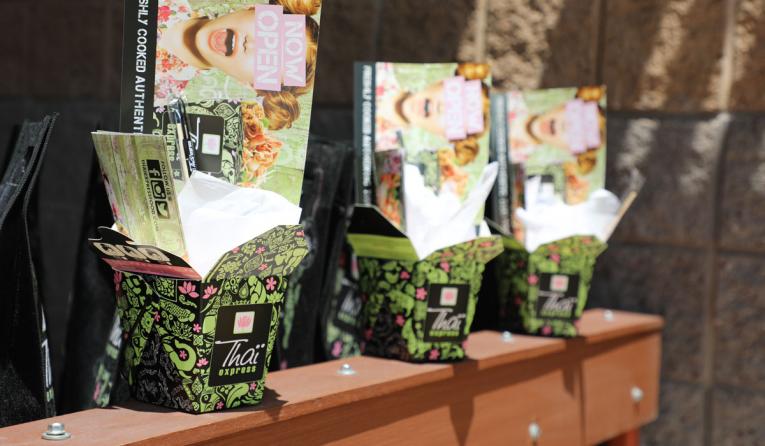 Kahala is also working to bring some of MTY’s Canadian stalwarts into the U.S. market, including concepts such as Thai Express.

In addition, 75 field employees visit franchisees continually to offer assistance, while every new franchisee spends one week at Kahala headquarters learning about the different support systems in place and how they can—and, in fact, should—utilize those services to build their business. “We want our franchisees to know we’re here for them,” Wuycheck says.

That approach has spurred expansion at many of Kahala’s concepts, including the fast-growing Planet Smoothie chain.

At the time of Kahala’s acquisition in 2015, Planet Smoothie had fewer than 100 units, most confined to the southeastern U.S. Today, the brand boasts 140 units and has entered new markets in the Mid-Atlantic and West Coast. Last year, Planet Smoothie unveiled 24 stores and remains on pace to open 30 stores by the end of 2019, including its first units in Nevada and Idaho.

MTY, meanwhile, introduced Planet Smoothie to a partner capable of opening units on military bases. As a result, there is now a Planet Smoothie operating in tandem with a Baja Fresh at the Naval Air Station in Lemoore, California, as well as the impending opening of a Planet Smoothie unit at a military outpost in Djibouti, Africa.

“There’s no chance we get that deal as a small, regional player,” Planet Smoothie brand leader Stacey Wopnford says. “With a small brand, you just can’t be that specific, but Kahala takes things off our plate so brand leaders like myself can spend more time in stores, more time with our franchisees, and more time doing things to grow the brand.”

Kahala’s entire setup, Wuycheck says, aims to create brand awareness for its individual concepts and to deliver tools that help franchisees run their businesses in a more profitable, efficient way.

“We’re constantly sharing best practices that others can implement, constantly looking at ways we can help our franchisees improve their service levels, hospitality in the restaurants, operations, or anything the guest experiences, because that will have an impact on our franchisees and the brands themselves,” he says. “There are proven recipes we’ve learned work well, and we know we can assist people in growing their business.”

That focus is something Michael Haith can appreciate. Haith spent two decades at the helm of Maui Wowi before selling the concept to Kahala in 2015. He says Kahala not only offered him “the right price at the right time,” but also inspired confidence that Maui Wowi’s existing franchisees would be supported in a professional way.

“The franchisees were folks I had built close relationships with, and I wanted them to be taken care of,” Haith says.

Though he is admittedly distanced from Maui Wowi these days—he’s now the CEO of Teriyaki Madness—he calls Kahala’s robust corporate structure and shared support model a distinct benefit for its brands and franchisees.

“When you have a team of specialists you can turn to for best practices and ideas, that’s a real advantage and something many brands of a similar size can only dream of,” Haith says.

While some might consider such a robust portfolio of distinctive quick-service brands exhausting, Kahala has not retreated. Last September, in fact, Kahala added the 330-unit sweetFrog frozen-yogurt chain to its ecosystem.

For Kahala brand leaders like Koch, another quick-service name in the Kahala orbit signifies added power, not potential problems.

“It’s never been a concern of mine that we get a lack of support or attention [from corporate], because the overall structure with Kahala excels,” Koch says. “We’re all moving in the same direction, and there’s a universal commitment to share what’s working so we’re all better.”

That’s important given Kahala’s interest in continuing to explore strategic acquisitions, as well as actively growing the unit count of about half of its 28 brands. Specifically, the latter is being driven by existing franchisees’ developing their core concepts and sister concepts within the Kahala enterprise. That strategy allows operators to address different dayparts, capitalize on attractive real estate opportunities, and diversify their own business portfolios.

“Plus, our existing franchisees know the core support structure they have, which makes for a smooth transition,” Wuycheck says, adding that current franchisees receive a discounted rate on any additional Kahala franchising deals.

At the same time, Kahala is also working to bring some of MTY’s Canadian stalwarts into the U.S. market, including concepts such as Thai Express, Mucho Burrito, and Sushi Shop, which is being developed in the U.S. under the Ginger Sushi Boutique name.

In particular, Wuycheck calls the 300-unit Thai Express chain a particularly promising import. The fast-casual chain pairs its fresh, ethnic fare with vibrant restaurants and a loyal following. To date, Kahala has opened about a dozen Thai Express units in the U.S. and inked an additional 50 agreements.

“Whether it’s one brand or 28, it’s all the same: hard work and commitment to individual franchisees,” Wuycheck says. “The formula doesn’t change.”