The chain had 100 percent more downloads in 2021 than the second best.

Outside Insights | January 10, 2022 | Adam Blacker
McDonald's
Through free food promotions and celebrity meal deals, the app of the golden arches was actually downloaded 33.3 percent more times in 2021 than 2020.

The top 10 quick-service restaurant apps in the U.S. in December were downloaded 19.6 percent more than those the month prior. With 11.6 million new installs across the grouping, it is the top month for the ranking since we started tracking in May of this year. The gains mainly came from Burger King and McDonald’s, who grew month-over-month downloads 162 percent and 16.5 percent, respectively. Chick-fil-A, Wendy’s and Taco Bell also had noticeable increases. 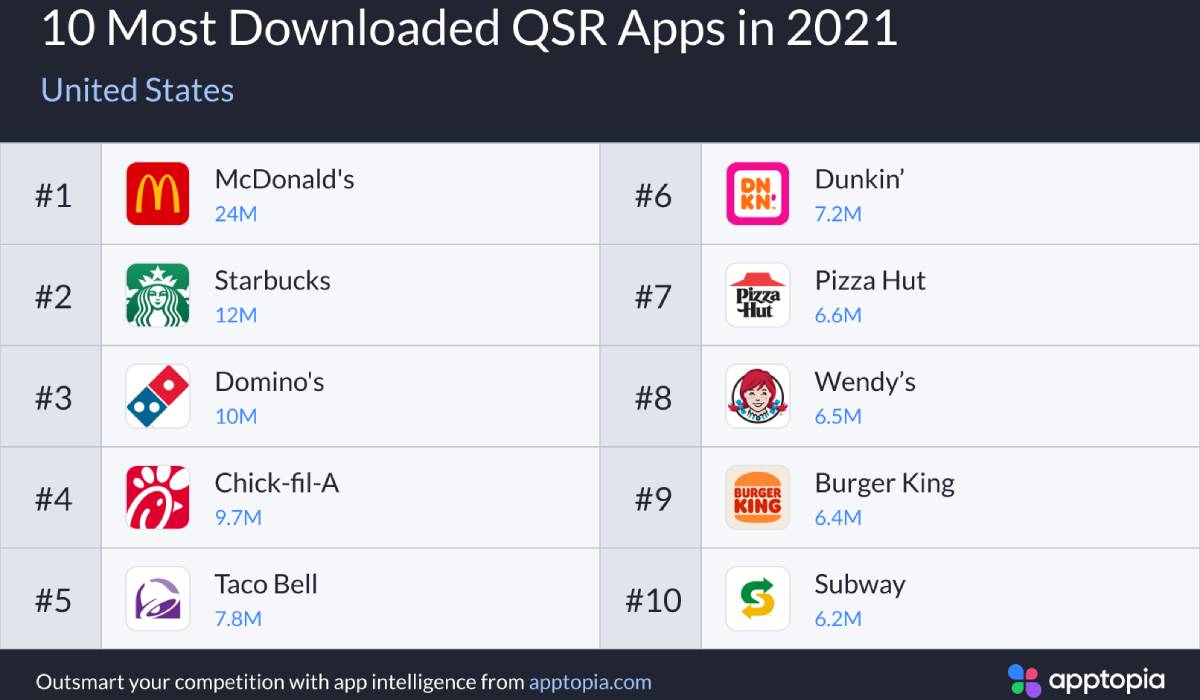 The early December downloads spike registered for the Burger King app created its second largest day of downloads ever since launching in May 2013. Apptopia estimates that on December 4th, the Burger King mobile app was downloaded 209k times. December 8, 2018 still holds the record with 283k. This was from the Whopper Detour promotion that made headlines a few years back.

The home of the Whopper was able to do this by executing on a 48 hour promotion, offering its signature burger for just 37 cents. BK was celebrating the Whopper’s 64th birthday by selling the sandwich at its original price. This effort was good enough to rank Burger King as the second most downloaded quick-service restaurant app in the country during the month of December. Typically the app ranks at #10 or off the chart.

Normally, a chart of the monthly leaders are shown but since it is the end of the year, the most downloaded quick-service restaurant apps in 2021 are being presented. We see in the chart above that McDonald’s has dominated, generating 100 percent more downloads than its next closest competitor in Starbucks. Through free food promotions and celebrity meal deals, the app of the golden arches was actually downloaded 33.3 percent more times in 2021 than 2020.

Even though they were top 10 apps, Subway, Chick-fil-A, and Burger King each had significant declines in downloads at 30.3 percent, 27.6 percent, and 26.4 percent, respectively. The biggest positive movement came from Dunkin’ which moved to the #6 spot, up from #10 last year. Subway got bumped from #5 last to year to #10 this year, while Little Caesar’s fell off the ranking this year after coming in seventh in 2020.

To get a peak at what may be to come for some quick-service restaurants in 2022, we turn to a full-service restaurant establishment in Applebee’s. The brand decided to jump on the trend of creating NFTs, or non-fungible tokens, and making a promotion out of it called Metaverse Monday. Applebee’s created several pieces of artwork depicting “iconic menu items” and minted them as NFTs to be sold.The first buyer of the NFT will receive free food for a year ($1560 value).

While the connection to the chain’s mobile app is not made clear in this promotion, those interested felt the need to install it as it led to its largest day of installs in the past 13 months. However, just like when Burger King did not make a clear connection to its mobile app with its celebrity meal campaign, this feels like a missed opportunity for Applebee’s. The company could have driven its customers to the mobile app in order to obtain more information on them, in order to cater better to them and increase retention/decrease time between meal orders.