A Missed Opportunity for Burger King?

Outside Insights | October 8, 2021 | Adam Blacker
Adobe Stock
Burger King came in at No. 11 this month for app downloads.

This month, we’ll focus on a recent Burger King promotion and where it might've missed the mark. But first, let’s look at the 10 most downloaded quick-service apps in the U.S. for the month of September. If you’re curious about previous months’ performances, you can view those by clicking on the author bio and perusing those articles. 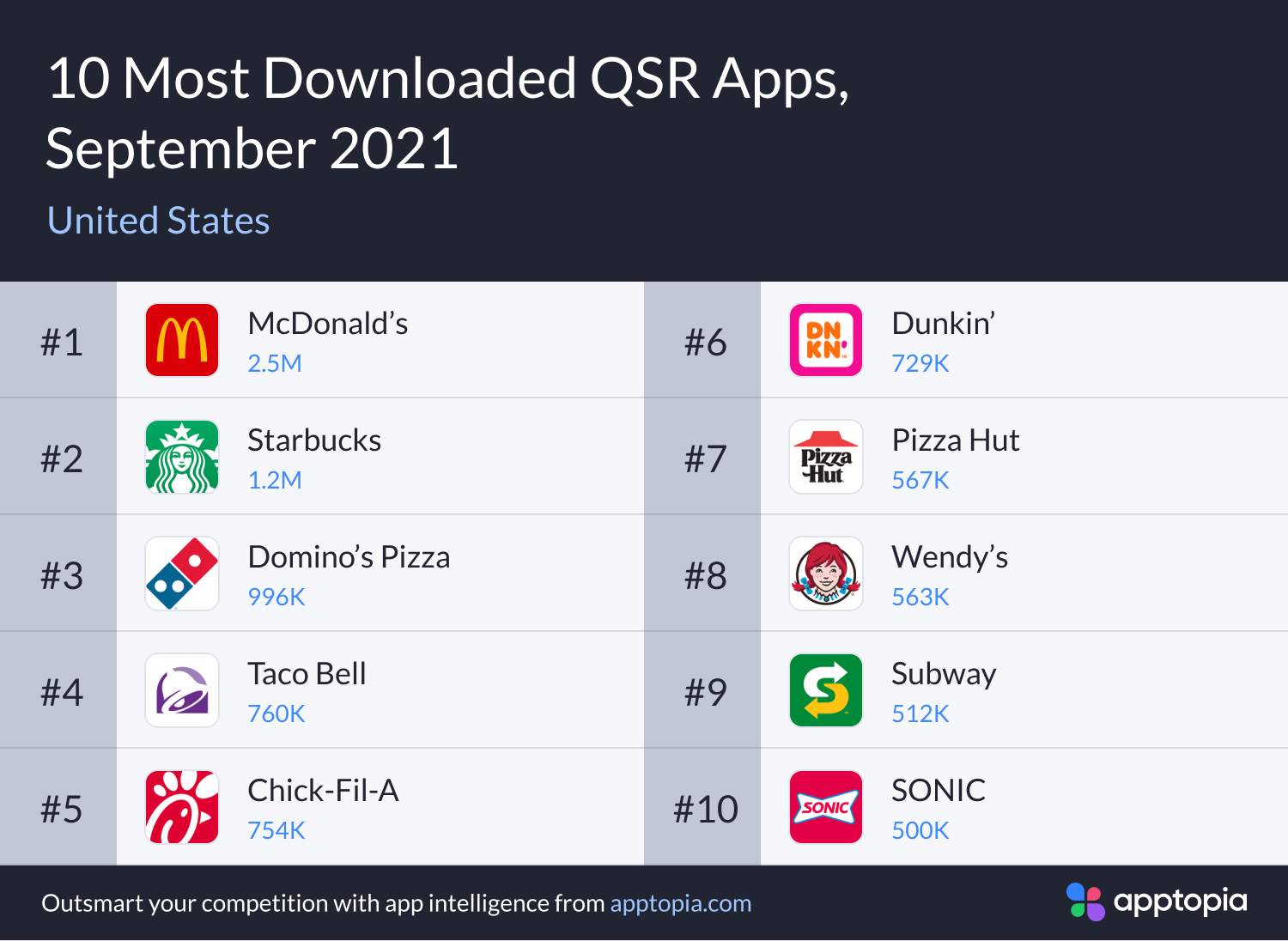 Downloads of the top 10 quick-serve apps increased 4 percent, month-over-month. Even with the gain on the whole, the top app in McDonald’s actually shrunk by 12 percent month-over-month as its flurry of downloads from the launch of its rewards program slowed down.

As I mentioned last month, the top 10 apps have not changed that much recently. Over the past four months, there are three apps moving in and out of the top 10 the most; Burger King, Subway and Sonic Drive-In. There will no doubt be bursts from other players like Chipotle or Popeyes, and we’ll bring those to you when they appear and explain what happened to generate those downloads.

This month, it’s Burger King that has taken the back seat in the No. 1 11 spot, letting Subway jump into the No. 9 spot. This surprised me as the franchise rolled out its rewards program nationwide and launched an interesting celebrity campaign this month. The moves did inspire downloads of its mobile app but not as much as one would think, given what we’ve seen from competitor promotions. 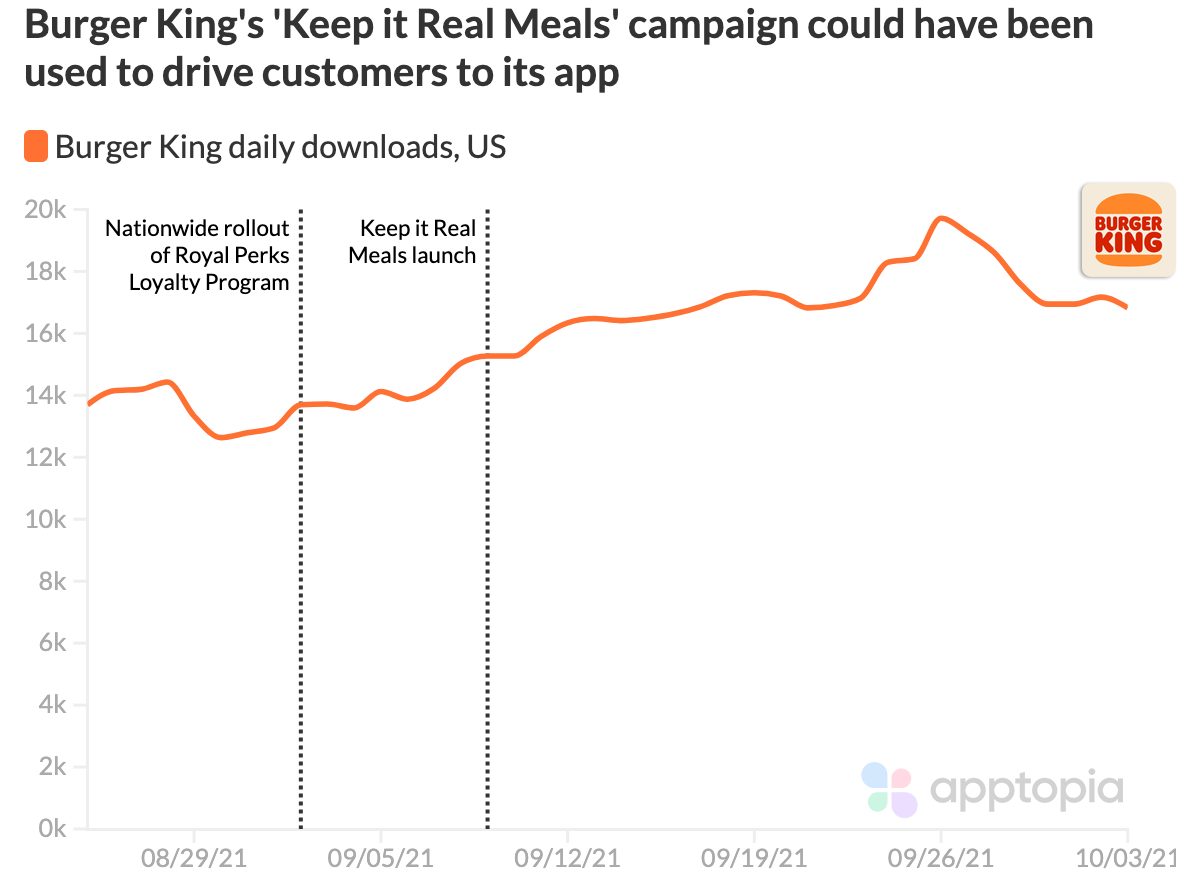 The reason why is pretty simple. The nationwide rollout wasn’t heavily promoted because Burger King was focused on its Keep it Real Meals campaign, which was heavily promoted. The call to action at the end of those TV spots was not to the mobile app, however. It directed would-be burger eaters to bk.com/realmeals to learn more. I was assuming the website was to learn more about Burger King’s real ingredients and to inspire change in the way consumers think about the food they are eating.

While this information is on the page, it requires scrolling to get to. The immediate call to action is to order food, specifically ordering one of these celebrity real meals. If ordering is going to be the immediate call to action, then this is a misguided customer journey. It’s 2021 and the mobile app is the destination. It’s the main portal for business transactions and customer communications. It’s also the headquarters of the loyalty program for customers.

Timing also plays a role in the misalignment here. The celebrity meals campaign launched just one week after Burger King rolled out its loyalty program nationwide. For the next big campaign after a nationwide rollout of a loyalty program not to be driving people to heart of that program (the app) feels like a missed opportunity. For any company, having customers enrolled in a loyalty program provides richer data on them, enabling tailored promotions and even menu ideation.

Going back to the commercial, think about if you are the one watching it and you see the call to action at the end. Are you more likely to open the mobile app (takes one click) from the phone that is either in your pocket or already in your hand, or will you go to type in a URL? What if inspiration strikes later in the day? Will you even remember the URL? Ordering via mobile app is almost always easier/more intuitive than via a website/mobile website. Burger King is a well-run company, though, and I believe they will learn quickly from this.

Two months ago was National Fry Day and we covered which brands’ mobile apps benefited the most from their promotions. In September, we had National Coffee Day on the 29th and the surprising winners were Krispy Kreme and Dutch Bros., two companies which recently went public.

While Krispy Kreme gave a free coffee to anyone who walked through the chain’s doors, it added a free doughnut if customers were also rewards members. This likely drove signups for the app and engagement with the app because like we mentioned before, these days the app is the HQ for a rewards program. Dutch Bros Customers got a chance to win a free drink every day for an entire year by using the company’s app to make a purchase or redeem a reward.

Is It Time for Facial Recognition in Restaurants?
The Keys to Protecting Electronic Equipment in a Restaurant
Checkers Pioneers Pivotal Drive-Thru Technology