The fast-food chain continues to lead the pack. But who's gaining ground?

Outside Insights | September 8, 2021 | Adam Blacker
Adobe Stock
McDonald’s, Starbucks, and Domino’s have been the top three each month this summer.

McDonald’s continues to lead all quick-service restaurant apps in downloads for the U.S. So far, this summer has not had much turnover for the top apps. Take a look at the 10 most downloaded quick-serve apps in August 2021 presented to you below and can compare the rankings and respective download numbers to those of June and July. 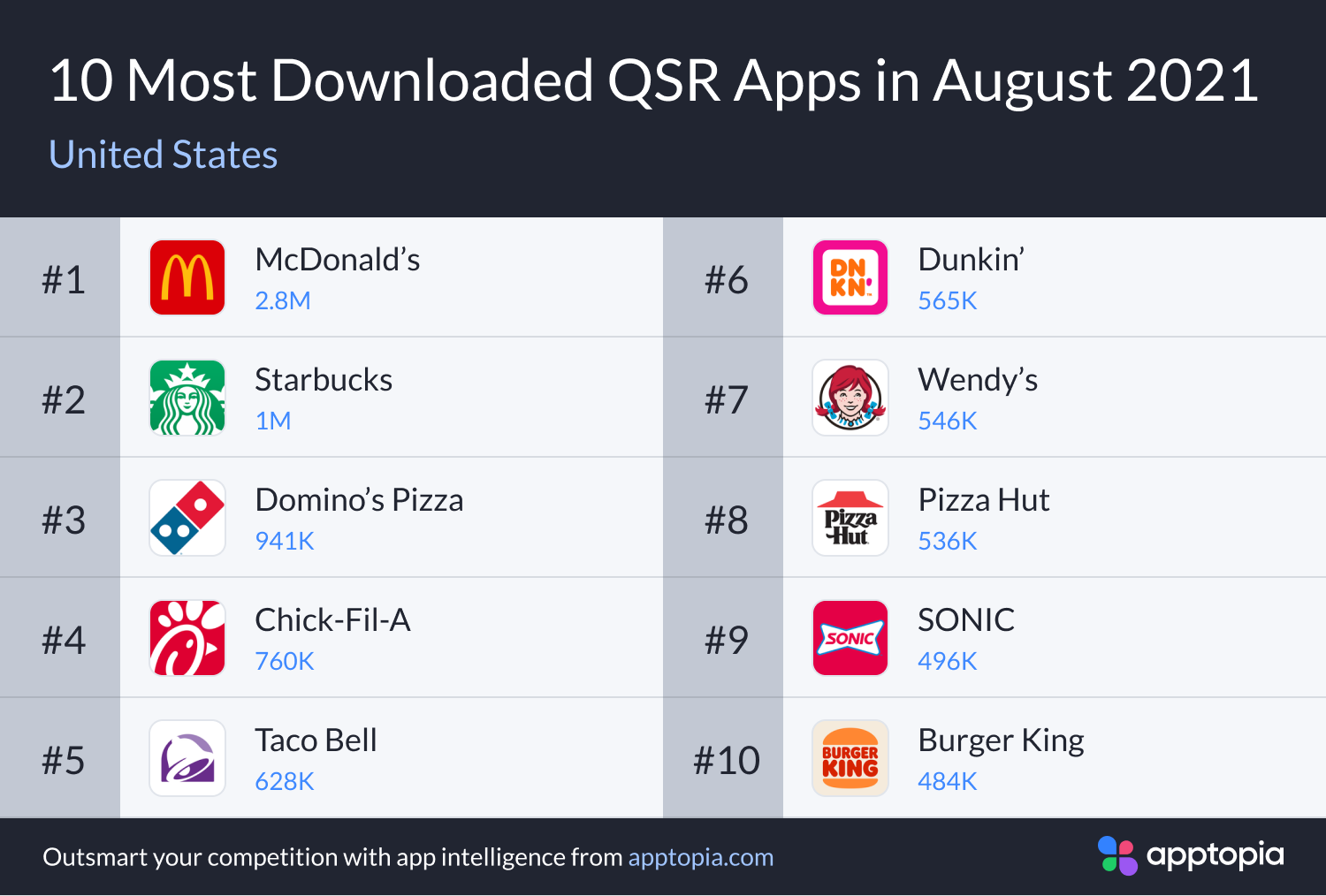 The biggest changes were Subway dropping from the No. 8 app in July to No. 11 this month, as Burger King pushed its way up from No. 12 to No. 10.

McDonald’s, Starbucks, and Domino’s have been the top three each month this summer. It’s interesting that these three powerhouses do not compete directly with one another. McDonald’s represents burgers, chicken, and fries, while Starbucks represents coffee, and Domino’s. For this edition, let’s dive into how far ahead these three elites are above their next highest competitor.

Drilling deeper and looking at McDonald’s’s direct competitors, we see that not only is it the top downloaded app every quarter (close call there with Chick-fil-A in Q2 2020) but the franchise has actually been gaining market share every quarter since Q2 2020 and is on pace to do so this quarter as well.

McDonald’s does have more locations than its competitors but it also tends to simply outspend them with high powered celebrity endorsements. Dating back to 2015, McDonald’s has been the market share leader for downloads every quarter except for four of them. The most recent miss for the franchise was in Q1 2020 when Chick-fil-A gave away a free eight-piece order of nuggets for anyone who signed into their account on the mobile app.

This coffee chain market consists of Starbucks, Dunkin’, Peet’s, Honey Dew Donuts, Tim Horton’s, and Blue Bottle. It’s tough to see all of them in the image below because as far as mobile app performance is concerned, it’s a two-horse race between Starbucks and Dunkin’.

The market is remarkably consistent as well. There is not nearly as much ebb and flow as there is in the fast food industry. Starbucks is a pioneer in the mobile app space and long ago understood the power of easy mobile payments, ordering ahead and a mobile loyalty program. Its market share doesn’t really shift outside of the 57–61 percent range.

Both Dunkin’ and Starbucks regularly show up as heavily downloaded quick-service apps and it makes sense given the nature of their offerings. Coffee is a daily purchase for many people and consistent routines lend themselves to high engagement, especially with a loyalty program involved.

Even though Dunkin’ is the clear runner up for coffee chains, its users do not leave the most glowing reviews of the app according to Apptopia review sentiment analysis. Peet’s appears to do quite well in this department even though the second most used keyword in its reviews is “Starbucks.” Without digging into more of the data, it's hard to know how many of these reviews are for the apps themselves versus the experience or products the reviewer experienced. Down the road in another edition, we’ll pull more in-depth user review data to provide a true analysis.

The market share lead that Domino’s has is not as strong as that of McDonald’s and Starbucks, but it has held its leadership position here dating back to Q1 2015. Little Caesars gave Domino’s a run for its money in the first quarter of 2020 but the “pizza pizza” franchise has been sliding backwards since then. Pizza Hut has more recently been Domino’s top app performance competitor and has been in the back half of these top 10 lists every month this summer.