Can Papa John’s Be as Big as Domino’s?

After a record year, CEO Rob Lynch doesn't see why not.

Rob Lynch didn’t get it. Fresh on the CEO job in summer 2019, the message internally was the pizza chain had bumped its ceiling. It was built out.

At the time, Papa John’s boasted roughly 3,400 restaurants. Two of its biggest competitors—Domino’s and Pizza Hut—were well over 6,000. And the other pillar of the pizza sector’s “Big 4,” Little Caesars, had north of 4,000.

Lynch, who came over from Arby’s, was handed oversized maps of every market across the country. They showed “everything was taken.”

“Then I said, well, we need new maps,” Lynch says.

He started with asking Amanda Clark to join the company in February 2020. As EVP of Restaurant Experience at Taco Bell, Clark led design, consumer-facing tech, marketing, merchandising, and new concepts and company development across 7,000 locations. Before, she helped Taco Bell deliver more net new stores than any other quick-serve in North America as SVP of development. Clark and Lynch also shared a stop at Procter & Gamble.

What Clark did at Papa John’s was introduce development capabilities driven by analytical tools capable of leveraging the company’s sales, population, and demographic data. And in the end, produce a completely remapped look at the U.S.

“Before [we did that] operators were being told there wasn’t really anywhere for them to go build,” Lynch says.

Lynch sees no reason Papa John’s can’t be the size of Pizza Hut or Domino’s. “Everything is in place for us to be able to go out and grow as fast or faster than all of our competitors,” he says. “It really just comes down to us having the determination to do it.”

That latter part might be where Papa John’s has changed most since Lynch’s arrival. In the first half of 2021, the company posted 123 net openings (68 in Q1 and 55 in Q2). The total figure was a record for Papa John’s and began to cut through the chain’s development fog. It had fallen into a pattern of opening a “fair amount of restaurants,” while also closing “a lot of restaurants,” Lynch explains. And then it shifted more toward closures in 2018 as the company’s struggles peaked. Papa John’s shuttered 128 North America units that fiscal calendar versus 79 opens. From Q4 2017 to Q2 2019, same-store sales ran negative for seven straight periods. The brand was still trying to shake a multi-year malaise brought on by an ugly breakup with founder John Schnatter. Beyond that, the company’s menu innovation and development strategy were idling. Lynch, from Papadias to Epic Stuffed Crust, tackled the first setback. The company introduced garlic parmesan crust about 90 days after Lynch joined—the first time Papa John’s added to its six-ingredient, never-frozen original pizza dough in company history. It hasn’t let up since.

The development angle, however, took more time. Papa John’s had to build infrastructure to support sustainable, significant unit expansion. This way, it wouldn’t simply increase the number of restaurants it was constructing, but also the number of net new locations. It needed tools to identify sites and corporate support to help franchisees set up units.

More vital than all of that, though, Papa John’s had to fix its unit-level economics and make the growth proposition an alluring one. And also, get sales going enough to keep restaurants from closing alongside new openings, and move away from the zero-sum reality of the late 2010s.

Papa John’s was making progress ahead of COVID, but the pandemic climate and how it boosted pizza brands blazed the recovery. North America same-store sales climbed 5.2 percent in Q2, which pulled back, totals a 33 percent two-year stack following last year’s record 28 percent increase.

Average-unit volumes have continued to lift as well, and are now eclipsing $1 million, with much of the growth flowing through to unit profitability, the company said.

“We’re seeing the performance of our restaurants change dramatically over the last 18–24 months,” Lynch says. “Unit economics are fantastic. Couple that with really low-cost of entry to build one of these things relative to a full-service drive-thru standalone [quick-service] restaurant and all of sudden you start having a very attractive model for both current and new franchisees.” The total investment to get a standard Papa John's franchise going is $198,130–$743,930. 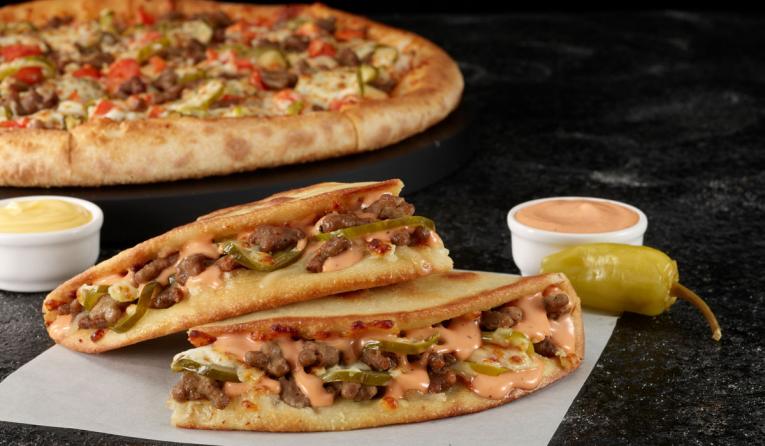 “People believe in the future and are focused on what we can do, not what we haven’t done," Lynch says.

In the trailing four quarters (leading up to the most recent period), Papa John’s opened a net of 176 restaurants to get to 5,523 systemwide, including 3,309 in North America.

Current operators, Lynch says, are discussing development again. That was hardly the case two years ago and it took 18 months for Papa John’s to shift the narrative.

At the same time, new operators are taking notice. The best example of which arrived in late September when Sun Holdings struck a deal with Papa John’s to open 100 units across Texas through 2029—the largest domestic development agreement in company history.

Lynch calls the move “the tip of the spear” for Papa John’s.

Sun Holdings was founded in 1997 by Guillermo Perales with a single Golden Corral. It’s since scaled past 1,000 locations in 12 states, including Burger King, Arby's, McAlister's, IHOP, Popeyes, T-Mobile, GNC, and a number of airport restaurant locations.

Perales entered the Arby’s system around the same time Lynch did. He was the chain’s developer of the year three of the six years Lynch spent with the brand. “He was building them and launching them successfully, faster than anybody else,” Lynch says.

There are some similarities in the brand stories as well. Lynch helped Arby’s transform into a “Fast-Crafted” chain as it posted 16 consecutive quarters of comps growth and produced record sales and profits in 2018.

Just as Perales was attracted to Arby’s comeback then, Lynch says, the same goes for Papa John’s. “This is a fantastic outcome for us,” Lynch says. “Getting somebody like Guillermo to come in and do a 100-unit deal, we probably would have let him in for 20 units because he’s such a great operator. But he wanted to sign up. He believes in what’s happening here. When we talked after we had been in discussions for a couple of months, he was like, ‘these unit economics are very compelling.’ Those were his words.”

Already, Lynch says, Perales and Sun Holdings are submitting sites “like nobody’s business.” He wouldn’t be surprised if the 100-unit deal came to market faster than announced. Or if the figure ends up higher.

“That really is kind of the culmination of all the work that we’ve been putting in for the last couple of years—to get where something that like that could actually happen,” Lynch says.

Papa John’s growth story has international legs, too. Lynch has pointed out in recent quarterly reports how the brand operates in 50 or so counties. Its competitors are in 100-plus.

There are 200 Papa John’s in China. Lynch believes there could be 1,000. Fifteen percent of Pizza Hut’s system sales this past quarter came from China. “We have an opportunity both to open up new countries and completely new whitespace, and also to work with our current franchisees in markets that we already have an operation but haven’t scaled to the point where we think it can go,” Lynch says.

More broadly, he believes Papa John’s is simply a different organization today, inside and out. It’s gotten to the point Lynch isn’t telling people what to do anymore, he says. He’s offering guidance and making decisions. “But we’ve got a whole company full of really talented, amazing people who can contribute at a really high level and so we’ve kind of pulled the reins off,” he says.

It’s why Papa John’s added 10–12 million new loyalty customers in the last 18 months and why product launches continue to arrive at a constant clip. All of those deterrents before, including growth related, “all of those reasons have gone away,” Lynch says.

“People believe in the future and are focused on what we can do, not what we haven’t done. Or wouldn’t do,” he says. “And so, I think that kind of culture—that’s the kind of place I want to work. That’s the kind of company I want to be a part of and I think that’s what’s really helping us outpace a lot of our peer group right now.”